Heat soak is a very broad term in the automotive world. It essentially means some part of the engine is getting too hot that it’s overwhelming the system capability. However, there’s a lot that goes into engine heat soak. It’s also confusing since people use the term in different ways. Worry not, though. In this article, we answer the question “what is heat soak”? We’ll also dive in and discuss the symptoms and implications of engines heat soaking. 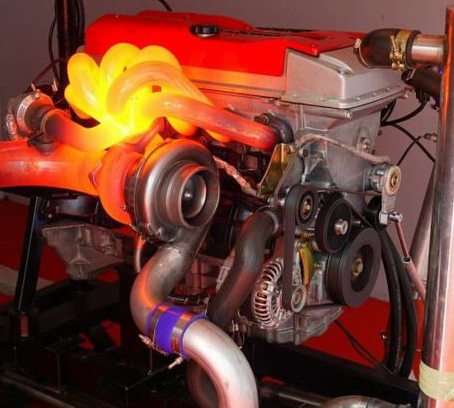 What Is Heat Soak?

In vague terms heat soak simply refers to some part of the engine – or the engine as a whole – getting too hot. Combustion engines produce a lot of heat and that heat has to go somewhere. It soaks into metals and fluids. Eventually it becomes so hot that heat absorption drops, and the engine can no longer efficiently rid itself of excess heat.

This phenomenon is usually seen on race tracks, canyon runs, at high elevation, towing heavy loads etc. These are situations where the engine is running hard for extended periods. It’s especially common on forced induction engines and more specifically turbo engines. Turbo heat soak is a big topic, so we’ll circle back to this point in-depth later in this article.

The primary form of heat soak relates to intake air temperatures (IAT). Hotter air is thinner so there’s less oxygen, which leads to power loss. The engine also becomes prone to pre-detonation, which poses a risk of blowing the motor. As such, the computer will pull timing resulting in further power loss. Heat soak is a viscous cycle with a lot of negative implications on engine health and performance.

Why Is Heat Soak Bad?

Well, we just touched on this a little bit, but there’s a lot that goes into heat soak. Many think of it as IAT’s as we discussed. However, it can be an endless cycle that starts with one part of an engine and eventually heat soaks the entire engine.

For example, a turbocharger starts heat soaking. That in turn overwhelms the intercooler and increases IAT’s. Higher intake temps create more heat internally. Oil and coolant begin heat soaking. Oil loses viscosity, friction increases, and clearances become tighter as metals expand with heat. There is coolant and oil running through the turbo(s), and those fluids are absorbing even more excess heat.

Engine heat soak usually isn’t a huge deal in short spurts as long as the engine is given sufficient cool-down time. However, serious heat soak for extended periods does put a lot of stress and wear on the engine. Those who consistently run into heat soak problems should look to address them with the necessary upgrades.

A few symptoms that point to heat soak include:

The main reason heat soaks leads to power loss is due to IAT’s increasing. Hotter air is less dense and it also causes the computer to retard timing. With severe IAT heat soak the power loss and poor performance will likely be very noticeable.

If you have oil and/or coolant temperature gauges keep an eye on those numbers. Different engines have different operating temperatures, so understand the optimal numbers for your engine. All engines get hot from time to time, and you may notice that after a few quick WOT runs. However, that’s not necessarily heat soak. The engine struggling to cool down is characteristic of heat soak since fluids and metals can take a long time to dispense heat once they’re overwhelmed.

Heat soak on turbo engines is a common issue on many factory cars. It’s less common on completely stock cars. Though, certain cars and engines may be more or less prone. Anyways, the real issue with heat soaking on turbo engines is that they’re so easy to tune and mod. A tune and basic bolt-on mods can take most modern turbo engines to the next level.

Superchargers and other forced induction engines are also more prone to heat soak. Air heats up as it’s compressed. However, turbos run off extremely hot exhaust gases thereby compounding the issue. Factory intercoolers are quickly overwhelmed by the increase in boost and heat.

Intercooler upgrades are an effective way to minimize heat soak, but it may not be enough for track cars and other extreme uses. You’ll still likely need other cooling mods like oil coolers, radiators, etc.

Alright – final section and this is to hopefully provide a bit more insight as to what is heat soak. Front mount intercoolers (FMIC) are a common option for cooling charge air. They’re more formally known as air-to-air intercoolers. Many racing teams and race cars utilize FMIC’s. However, air-to-water intercoolers are becoming increasingly more popular in factory turbo engines.

Air-to-water intercoolers are excellent for many reasons. A water/coolant mix has more heat-carrying capacity than air. This means an air-to-water intercooler is less susceptible to heat soaking. However, they still can experience heat soaking and when it happens it’s a lot worse than an air-to-air FMIC. That’s because the water will take a lot longer to rid itself of the excess heat. Air cools down faster than water.

Hence the reason FMIC’s are still a popular option in racing. It’s simply an example that there is a lot that goes into engine and turbo heat soak. Heat isn’t the only defining factor in heat soak since it’s also important how quickly things can cool down once they’re subject to soaking.