The Volvo B18 engine will go down as one of the most legendary motors of all time. A 1.8 liter inline-four, Volvo manufactured the B18 throughout the 1960s, putting it in a variety of their vehicles. The B18 Volvo has the distinction of being the highest mileage motor in world history, with Irv Gordon’s 3+ million mile B18 holding the Guinness World Record.

While younger gear heads and auto enthusiasts might not be familiar with the Volvo B18 engine, it is a fantastic motor. Volvo hasn’t produced the engine since the 1960s, but there are still a surprising number on the roads today. Not only did Volvo put the B18 in cars, but it also found its way into several military vehicles and marine applications.

Eventually, Volvo superseded the B18 with the bored-out B20 in 1969. The guide will cover the Volvo B18 engine, looking at its specifications, history, design, reliability, and performance. 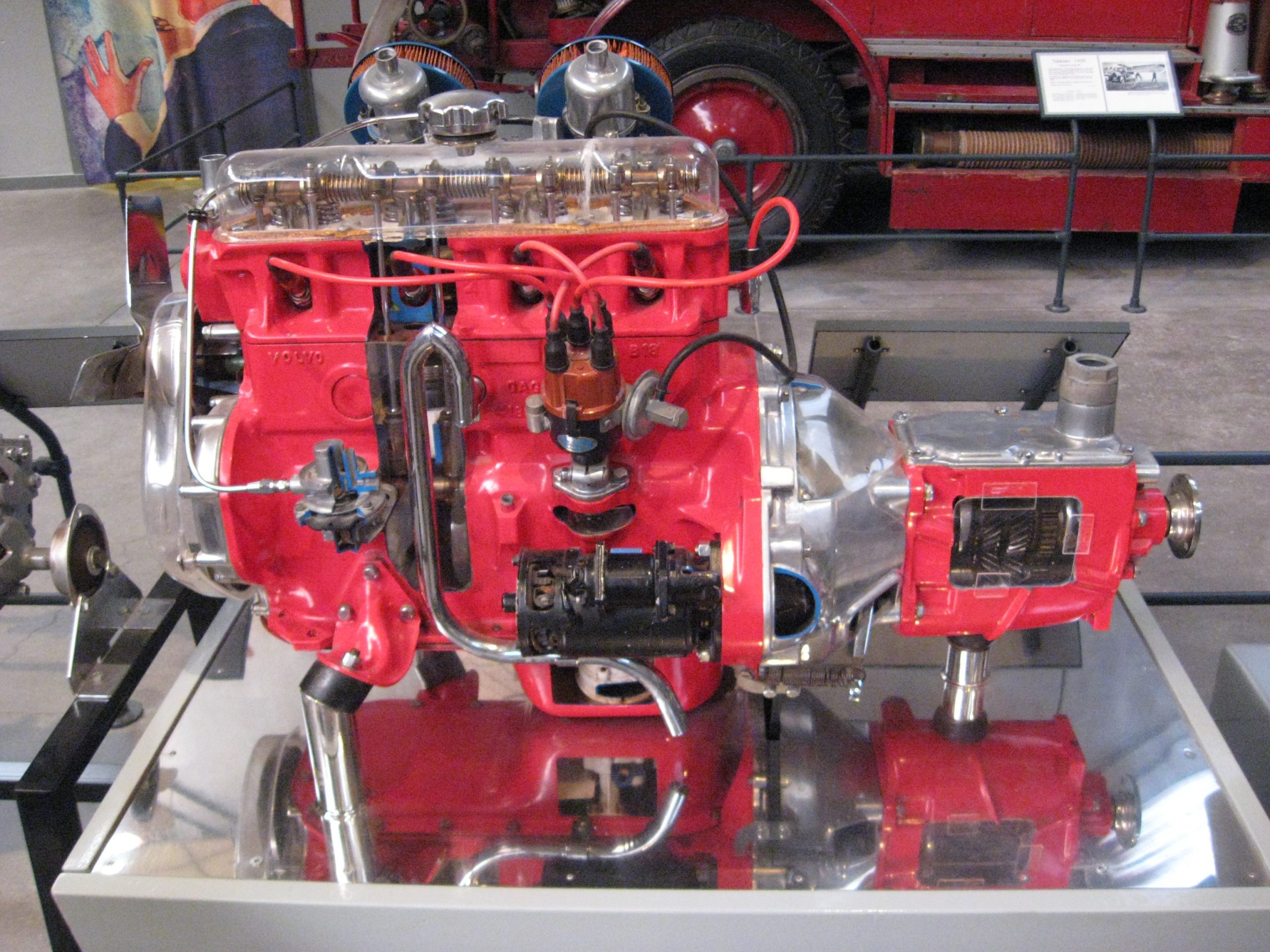 The Volvo B18A, B, and D appeared in the following cars:

The Volvo B18C also appeared in the following non-car vehicles:

In 1961, Volvo once again bored the B series out, creating the 1.8 L B18 engine for use in the 1962 model year. The B18, though related to the B16 and B14, had many improvements and was capable of producing more horsepower. It was offered in both single and double carburetor versions, like the B4B/B14.

Volvo ended up releasing four versions of the engine, the B18 A-D. Of the three, the B18C was the only one mainly used in non-car applications. The Swedish military started using the B18C in 1962, after previously using the B14/B16. Volvo also put the B18C into various tractors in the 1960s, including the T320 Buster.

In addition, high performance manufacturers Marcos and Facel also used the B18B/D in a few of their cars. Facel put the B18 in their Facel III and also as a replacement for the B16 in the Facellia, which was notoriously prone to failure. Marcos used the B18D in their 1800GT from 1964-1965, where it made around 115 horsepower.

The last model year of the B18 Volvo was 1968, after which they introduced the larger B20 to replace it. Though it’s now roughly five decades out of production, the B18 is still used by people today. Vintage B18 powered Volvos and Marcos still roam the streets, though they are becoming increasingly rare.

As mentioned, beginning in 1962 the Swedish military started using the B18 in various applications. The most prominent were the Volvo Laplander L3315, L3314, and L3304 vehicles. It also appeared in the Bandvagn 202, too. The engines made around 80 horsepower, and they were used for their stout reliability. The Swedish air force also uses a version of the B18 on their PS-15 reconnaissance radar system.

The Volvo B18 engine is a 1.8 L inline-four engine. It has an overhead valve (OHV) valve train with a single cam-in-block camshaft, and has 2 valves/cylinder for 8 total. Differentiating the B18 from its B16 predecessor is the addition of two main bearings for the crankshaft for a total of five. The B18 also got a 12 volt electrical system for the first time, technology Volvo would put in future engines.

The B18 came in either single or double-carburetor versions, utilizing S.U. or Zenith/Stromberg carbs. Volvo made four versions of the engine, the B18A, B18B, B18C, and B18D. The firing order on all engines was 1-3-4-2 anti-clockwise, and it has an oil capacity of 3.75 l.

All cranks were drop forged, and the oil filter was full-flowing and located on the right side of the block. The valves were made of steel with chrome heads, and the intake manifold had separate intake and exhaust ports. The B18 could rev exceptional high, and could handle upwards of 7,800 RPM. All internals on the B18s are interchangeable with each other and the larger B20.

If there is one label you can give the Volvo B18 engine, it’s reliable. Now granted, we say that about a lot of engines, but there are few that can back that name up like the B18. While the engine was still in production, the engineers at Volvo ran it under full throttle for 500 hours non-stop as part of their excruciating wear testing.

As a result, they came out with an engine that can handle obscene amounts of miles. It’s not uncommon for these motors to run well past 200,000-300,000 miles, and there are several that pumped out more than 600,000 miles with only minimal rebuilds. Considering this was the 1960s, a time when 100,000 miles out an engine was considered exceptional, the B18 Volvo really blew people away with its incredible longevity.

The 3 Million Mile Volvo B18 Engine

As we mentioned earlier, the Volvo B18 has the distinction of being the highest mileage motor in history. In 1966, Irv Gordon purchased a Volvo P1800S with the B18 engine. Over the next 58 years, he proceeded to put an incredible 3,039,122 miles on it. You didn’t read that wrong, 3 million miles.

By 2018, Gordon had reportedly put more than 3.25 million miles on the engine, and it was only rebuilt twice during its history. Gordon has since passed, but the engine is STILL kicking, being driven around occasionally by his friends and relatives.

Volvo B18 Performance and Mods

From the factory, the B18 made between 75-115 horsepower and 100-112 lb-ft of torque. While that doesn’t sound like a lot today, the cars they were powering barely weighed 2,500 lbs. They produced decent acceleration and top speeds of more than 120 miles per hour.

Since its release, the B18 has been a popular engine for racing. It was used in high performance vehicles like the Facel III and Marcos 1800 GT, and developed a solid reputation for performance. Volvo released a street tuning kit for the B18, which would raise horsepower to 135 and torque to 125 lb-ft. It mainly involved raising compression, using B18B manifolds and cam, and using new carbs.

In 1971, the engine designer Gunnar Axelsson created a dual overhead camshaft (DOHC) version of the B18. This new twin-cam setup raised performance up to 190-225 horsepower. It can be easily fitted to all B18 engines, and is a pretty solid power bump.

If you’re looking at adding some mods to your B18 there are a couple of routes you can take. Bolt-on wise, adding a freer flowing exhaust system is a good upgrade. You’ll also want to make sure you are using the B18B distributor. Upgrading to the B20E cylinder head will add power, and the B20D or F cam will also add some good performance.

From there, you’re going to have to open up the engine to really get much else done. Porting and polishing the valves and head has shown good improvements, and adding a larger carb is a good way to add more air and fuel.

The B18 engine is one of the finest motors Volvo ever created. It lasted from 1961-1968, and powered some incredibly memorable vintage coupes, sedans, and wagons. The mighty inline-four might not have looked like a lot, but it could go for endless amounts of miles without issue.

It was used in high performance vehicles, like the Marcos 1800 GT and Facel III,  as well as military vehicles like the Laplander L3314. Even farmers used the B18 on their tractors, and many boating enthusiasts found the 1.8 L engines strapped to their rears.

Hopefully, the spirit of the B18 Volvo will never die – just like the engines themselves. Even though they have been out of official production for more than five decades, they still have a strong enthusiast community and reputation. Here’s to the mighty Volvo B18, an all-time incredible inline-four.