Anyone looking to tune and mod their car likely sees mention of tuning stages. Stage 1, stage 2, stage 2+, and the list could go on for a good while. What the heck are all of these tuning stages? What’s the different between a stage 1 and stage 2 tune? What does stage 1+ or 2+ mean? These are all very fair questions. The meaning of stages can vary from car to car and engine to engine. It makes it challenging to grasp the true meaning of different tune stages. In this article, we discuss engine tuning stages, differences, power gains, supporting mods, and more. 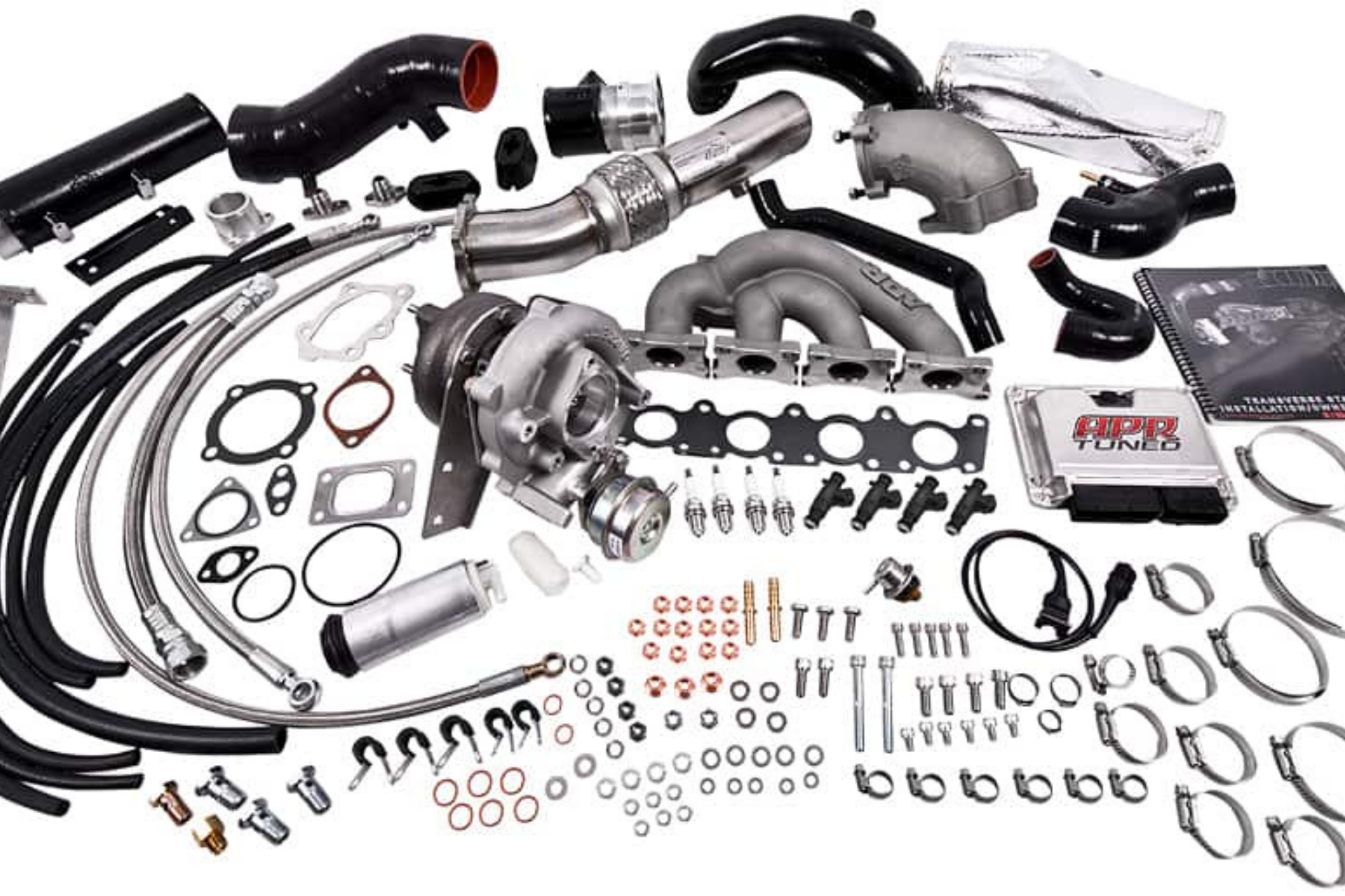 We already hate ourselves for even entertaining the idea of writing this article – let alone actually writing one. However, tuning and modding engines is part of our DNA. Stages are simply one of the things we have to live with. Referring to tunes by stages isn’t our favorite method, but we also don’t have any better ideas.

Why do we dislike the stages terminology? Well, there are a couple reasons. The major one is that they’re very inconsistent from engine to engine. Stage 1 tuning on one engine can be very different from the same tuning on another engine. Additionally, a specific stage 1 car might be faster than another stage 3 car.

The exact details might vary, which is the major downside to tuning stages. However, there are some general rules that apply to most cars and engines. The point of this section is to layout the fact that this isn’t a perfect science. There isn’t always a right or wrong answer as to what quality a specific tune as stage 1 vs stage 2. Knowing the general info can go a long way in understanding the differences, though.

Not every company uses consistent staging. These are rough examples, but it paints a general picture. Some companies go by stage 1, 1+, and 2. Others may use stage 1, 2, and 3. Meanwhile, the next tuning company has tuning stages 1-5.

It’s a large reason tuning stages can be so confusing. You simply want to know the difference between stage 1 tuning and stage 2. However, it’s hard to tell the difference when companies use contrasting staging. Fortunately, there are some general guidelines that almost all tuning companies follow.

It’s pretty simple stuff when you boil it down to the basics. A higher stage tune should offer more power. In turn, more power can put more stress on the motor. How much more power, though? Does the risk increase significantly as you increase stages? What are some of the supporting mods recommended for each stage? These are the topics we cover in-depth through the rest of the article along with other helpful info.

Let’s run through a few disclaimers. This article quotes rough horsepower gains for each stage of tuning. These are very rough estimates and not every car and engine will see these power gains. Some engines may pick up more power while others don’t gain any power from certain mods and tuning.

Mods required is based on standard, average info. Always follow the advice and recommendations from specific tuners. For example, most stage 1 tunes don’t require any other mods. Some engines and tuning companies may require other mods to safely and effectively run stage 1 tuning.

Lastly, all engine mods and tuning is at your own risk. In general, the more power you throw at an engine the greater the risk you accept. Increasing power, torque, and performance subjects the engine to additional stress, which the engine may or may not tolerate.

It’s fair to say stage 1 tuning is the most common option. These tunes and mods generally do not require additional mods. Simply add a stage 1 modification and go. Even though most stage 1 tunes don’t require mods there are still some good mods to couple with a stage 1 tune. An intake and exhaust are popular stage 1 mods to include with the tune.

Stage 1 mods generally include intakes, cat-back exhaust, blow-off valves, and other basic bolt-on engine mods. Again, none of this is a perfect science. However, the general idea is that stage 1 tuning and mods are basic things that usually don’t require further modification.

Some use tuning stages 1+ as a slightly more aggressive variant of the base stage 1. These may add a bit more boost, increase ignition timing, or a combination of other tuning factors to extract a bit more power. For some companies a stage 1+ tune may be very similar to a stage 2 tune from another company. That’s not always the case, though.

You might also see that stage 1+ is designed for better fueling like E85 blends or race fuels. As with basic stage 1 tunes, these tuning options usually don’t absolutely require additional mods. A few basic bolt-ons and better fueling can help extract a bit more power. We like to consider a stage 1+ tune as a middle ground between true stage 1 & 2 tunes.

Key highlights of stage 1 mods are:

A tune, intake, and exhaust are three of the key pieces to building the basis for more power and performance. They’re all usually pretty simple and inexpensive mods. Hence, referring to them as stage 1 tuning and mods. Stage 1+ incorporates the same basic parts with slightly more aggressive tuning.

Stage 2 is where things can become a lot different depending on the specific car in question, tuning company, and other factors. What is fair to say is that stage 2 tuning and mods are more aggressive. Stage 2 tunes are usually designed for use with other modifications. It’s a good idea to already have the basic stage 1 mods like an intake and exhaust.

Then you add in more mods like headers for NA engines or downpipes for turbo engines. Cooling system upgrades like a FMIC are common stage 2 mods, too. The list goes on and on, and we’ll provide a list in the stage 2 summary like we did above.

These are still fairly simple bolt-on mods that take things a step further than stage 1. We’re not quite to the point of adding forced induction or upgrading stock turbos or superchargers. Stage 2 is typically where you’re looking to maximize power and performance before moving onto more serious, expensive mods.

It’s a little confusing since there can often be a large variety in stage 2 tuning and mods. Some engines may be considered stage 2 with a tune, intake, and headers. Another may still be stage 2 but have even more mods such as cams, intake manifold, fuel pump and injector upgrades, etc.

Often stage 2+ tuning may require very specific mods like a camshaft or pulley upgrades. This is to the point of maximizing power output on the current setup. A true stage 2+ tune will often require at least 93 octane and potentially even E85 or race gas blends.

We like to consider stage 2+ as being FBO (full bolt-on). Meaning the engine has all of the basic bolt-on mods alongside quality fueling and an aggressive tune. The exact mods that define FBO can be vague and it depends on each car in question. Using a turbo car, for example, we think of FBO as a tune, intake, downpipes, FMIC, BOV, turbo inlets and outlets if applicable, and any necessary fueling mods or other supporting mods.

The list of typical stage 2 or stage 2+ mods includes:

It’s a pretty long list, and there could even be some other potential things to add. Stage 2 is complicated to explain perfectly because it can vary so much. However, in general, it’s more mods and better power mods than stage 1. The tuning is more aggressive. It’s not quite to the point of tackling major mods that we’ll discuss next in stage 3.

Not many companies go beyond stage 3 mods or tuning. As such, stage 3 is often the all-out, no expense spared, most aggressive setup for big power. This is where NA engines start adding forced induction and/or boring and stroking the engine. Turbo and supercharged engines look for bigger turbos and superchargers.

Almost all engines will require extensive fueling mods at this point. A lot of modern cars use direct injection, which can be very capable. However, these systems rely on incredibly high-pressure and they’re harder to modify. Many look to add extra fuel pumps and port injection. It may also be time to address engine internals like the block, rods, bearings, pistons, head studs, etc. Stuff like this is common when moving onto a stage 3 or 3+ setup.

Power gains are really pretty limitless when it comes to stage 3 tuning and mods. You can keep things modest or build an all-out 1,000+whp engine. A lot of actual tunes themselves don’t go by stages at this point. Rather, it’s mostly custom tuning to meet your specific goals.

We won’t bother doing the complete list from stage 2 mods above. Simply keep in mind many of those mods may also be found on stage 3 or 3+ cars. Here’s a few of the extra mods that are common:

This list could truly go on forever. Stage 3 can encompass anything from a mild 400whp build with turbo upgrades all the way to full blown builds making 1,000+whp.

As we jumped into in this article the exact meaning of stages can vary wildly from car to car and tuner to tuner. Stage 1 mods can be a lot different on two different engines. That goes for all of the other stages, too. Despite this there are some general rules of thumb:

These are the guidelines that many tuners and companies follow when stating tuning stages. However, when it comes to specific details it can vary a lot. One companies stage 1 part may be similar to another’s stage 2, for example. Hopefully this article was a good starting point for understanding the basics. It becomes a lot more simplistic when you focus on a certain engine rather than looking at it from a holistic view.

What stage mods and tuning do you have on your car? What are the mods?