The KD engines are a diesel series first introduced by Toyota in 2000. The first generation of the Toyota KD engine, known as the 1KD-FTV 3.0L, was seen in July of 2000 and first used in the Japanese market’s Toyota Land Cruiser Prado. Second-generation KD engines, the 2KD-FTVs, had a smaller 2.5L displacement and were first seen on the market in 2002. Both of these diesel engines have a straight-4 cylinder engine configuration.

First-generation Toyota KDs are renowned for their decent torque output, low fuel consumption, and exceptional power compared to their predecessor. However, no engine is perfect. Throughout this article, we will dissect some of the most common problems found in the KD series engines and their overall reliability and performance capabilities. Unfortunately, no engine is perfect, and the Toyota KD’s have some blatant design flaws.

Toyota as a manufacturer has done an exceptional job of producing quality diesel engines. Yet, certain issues, such as cracked pistons, can be a common occurrence in the first-generation KD diesel. The 2KD engines aimed to correct the initial various problems drivers experienced and are still in production in 2022. Let’s look into the further details of the Toyota KD’s specs, overall reliability, and the most commonly occurring problems below. 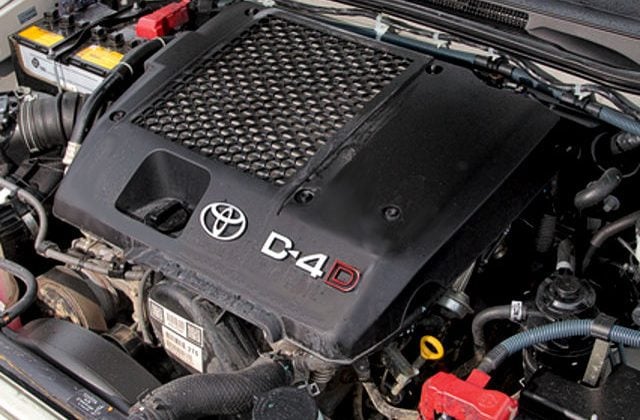 Listed below is a quick list of specs for the first generation KD diesel engine, 1KD-FTV:

The following list below is a quick outline of specs for the second generation KD diesel engine, 2KD-FTV:

Which cars use the Toyota KD diesel engines?

The Toyota 1KD-FTV can be found in the following Toyota models listed below:

The Toyota 2KD-FTV can be found within the following Toyota models listed below:

For more information on an older Toyota engine utilized in the 4Runner, check out our previous guide on the Toyota 3VZE 3.0L engine.

The KD diesel engines are not necessarily the most reliable diesel engines manufactured by Toyota. Fortunately, for what the Toyota KD engines lack in reliability, they make up for with lower fuel consumption and more power output than their predecessor, the 1KZ engine. However, various problems such as failed injectors resulting in a rough idle, high oil consumption issues, and engine knocking upon cold starts do seem to be quite common for both series of diesel KD engines. It’s important to note that the 2KD-FTV has a better track record in terms of reliability compared to the first generation 1KD-FTV engines.

Due to the likely occurrence of substantial problems, we would have to rate the overall reliability of the Toyota KD engines to be average at best. The likelihood of a major repair is reported too often before 100,000 miles for us to rate the Toyota KD anything better than average. The fact that older Toyota diesel engines are more reliable and have better longevity causes us to knock off points for both the 1KD-FTV and the 2KD-FTV. However, it’s important to note that many Toyota KD drivers may never experience our listed problems and use these engines as daily drivers. Many variables such as usage of high-quality oil and proper maintenance and repairs significantly affect both the 1KD-FTV and 2KD-FTV’s overall durability and lifespan.

Reliability has always been a brand strength that Toyota has prided itself on. However, both KD engines do have serious enough design problems that stand out compared to many of the company’s other engines. In the following section below, we will examine some of the most common major problems that occur and their associated symptoms.

Not every Toyota KD engine will experience the problems listed below, however, we have found these three problems to be some of the most commonly occurring issues for both the 1KD-FTV and 2KD-FTV engines.

Cracked pistons in diesel engines can have multiple different causes. One of the most common culprits for a cracked piston in the KD engines is dirty fuel injectors. The usage of low-quality fuel will directly lead to the deterioration and cracking of pistons over time. Another potential catalyst for cracked pistons can be improper exhaust gas recirculation, which can lead to a multitude of engine problems. Again, this is a crucial reminder always to use high-quality oil and practice proper maintenance to increase any engine’s lifespan.

Some of the most common symptoms for cracked pistons within the Toyota KD engines include:

Problems with the rail injectors within the Toyota KD engines may commonly be caused by water contamination. Excess water within the fuel can lead to corrosion and wear on metal surfaces and prohibit proper lubrication within the engine. Fuel contamination and improper fuel filtration are both catalysts for excess water within the fuel. Problems with common rail injectors may result in many additional engine problems until engine damage is so severe that it may potentially lead to an entire engine replacement.
Rail

The most common symptoms of rail injector problems for the Toyota KD engines include:

It is important to note that Toyota faced a class-action lawsuit due to faulty DPF filters for the Hilux, Fortuner, and Prado models sold within the Australian market. As of May 2020, Toyota has fitted all of the models mentioned above with a new DPF filter system to meet national standards adequately.

One of the most common causes for high oil consumption and oil leaks within Toyota KD engines (and most diesel engines) is the degradation or damage of the oil gaskets. Damage to the oil gaskets can create engine sludge buildup; excess engine sludge will create various engine performance issues. Improper pressure within turbine housings and the compressor can also be commonly associated with nagging oil leaks in the Toyota KD engines. If turbo oil seals lose their seal, oil can leak into the exhaust system, resulting in engine damage. This issue is another engine problem that can be deterred by the usage of high-quality oil, observant owners, and proper maintenance.

Some of the most common symptoms of oil consumption problems for the Toyota KD engines include:

Toyota diesel enthusiasts often seek out modifications and upgrades to increase their KD engines’ overall reliability and performance capabilities. For example, the Hilux and Prado models can benefit from certain upgrades to boost their power. Custom ECU mapping is a common first choice for many Hilux and Prado drivers (as well as other diesel Toyota KD drivers) to substantially increase torque. In addition, upgraded turbos and intercoolers can also help a custom diesel project boost power.

Replacement performance modules are also commonly sought out for certain models such as the HiAce. Upgraded modules can increase efficiency and overall engine performance immediately upon installation. In addition to upgraded performance modules, a new exhaust system can be the essential piece needed for any Toyota KD seeking better airflow and louder performance exhaust sounds.

Furthermore, it may be essential to upgrade your fuel injectors. As we stated earlier within this article, the Toyota KD engine series does have certain deficiencies tied to its fuel injectors. Yet, upgraded fuel injectors could increase your diesel KD’s reliability, lifespan, as well as overall power and performance.

What the Toyota KD engines lack in reliability, they make up for with their power output and lower fuel consumption compared to their Toyota predecessors. However, some of the problems associated with the Toyota KD engines may be too much of a liability for drivers to overlook. Toyota diesel engines generally have good track records for their durability, yet certain aspects of the KD engines missed the mark.

It is hard to ignore the design flaws within the 1KD-FTV, especially considering the large class-action lawsuit placed against Toyota in 2019. DFP filter problems were extremely common and irreparable to the point where certain auto shops gained a bad reputation and lost clientele. Regardless of the DFP filter system being redesigned, other problems such as cracked pistons and oil leaks are frequently reported for both generations of Toyota KD engines. Like most engines, these problems can be deterred with proper maintenance and usage of high-quality oil. Yet, due to these lingering issues and design flaws, our verdict for the reliability of the Toyota KD engines is rated as average at best.

However, the Toyota KD engines have maintained their place on the automotive market for good reason. The 2KD-FTV aimed to fix many of the design flaws we discussed and has generated a better reputation than the first-generation engines. Many Toyota enthusiasts have positive reports about using this diesel for its strong output and low fuel consumption. Toyota is held to a high standard for its brand reputation and reliability. In conclusion, it’s easy to see why Toyota KD engines have had such a dynamic impact on the automotive market over the past few decades.

Finally, let us know in the comments below your experience with either generation of Toyota KDs and how they compare to other diesel engines from Toyota!