The Toyota Camry and Corolla are some of the best-selling cars worldwide. In fact, as of 2019, the Corolla was the best-selling model globally, with the Camry following in 5th place. Toyota’s success with these models comes from producing high-quality, reliable engines with long lifespans at an affordable price-point. The Corolla has long been considered the Camry’s more affordable “little brother.” However, what the Corolla lacks compared to the larger engine and body of the Camry, it makes up for inefficiency. It’s hard to dissect these infamous models too critically, and both are great options for drivers seeking durable everyday drivers that will reach high mileage.

The Toyota Corolla was first introduced to the automotive market in 1966; by 1974, it was the best-selling car internationally. Toyota aimed to capitalize on the Corolla’s success by introducing the larger Camry model in 1982. The initial Corolla came with an 1100 cc k-pushrod engine, and the Camry with a 1600 cc t-series 4-cylinder engine. A far stretch from the 139-169 hp that comes stock with the 2022 Corolla and 202-301 hp in the 2022 Camry. 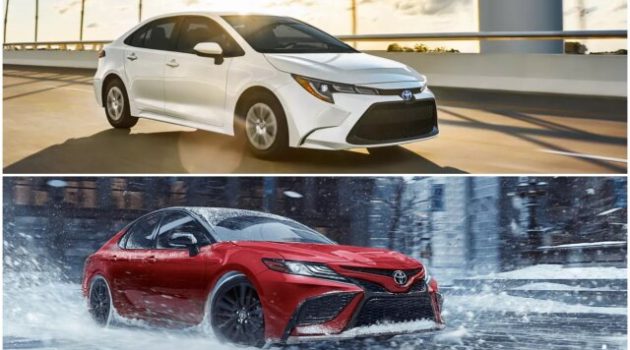 There are various differentiations in terms of power and performance for Toyota’s best-selling models. In order to clearly examine those differences, we will dissect each model’s engine and overall capabilities. Now let’s jump into some of the basic specs of the current generation of Toyota Corolla and Camry models, starting off with the 2022 Corolla’s engine specs below.

The 2022 Toyota Corolla is offered in nine different configurations, including the Apex and Nightshade edition. Prices range from $20,075 for the base L configuration to $28,630 for the XSE Apex Edition. All engines for the Corolla are naturally aspirated with a DOHC 16 valvetrain. Toyota prioritizes affordability, reliability, and durability in its Corolla design, offering drivers an accessible option at a great price point. Compared to similarly-sized entry-level models, we consider the Corolla to be a good option for any driver needing an economical everyday driver. However, some of the engine specs listed above do not apply to the hybrid edition due to differences in the fuel system and engine components. Below we outline the 2022 Toyota Camry’s specs and some of the differences in the offered engines compared to the Corolla.

Again, some of these specifications do not apply to the hybrid configurations due to differences in the fuel system and engine design. The 2022 Toyota Camry also comes in nine different configurations ranging in price from $26,420 for the LE base to $33,945 for the XSE Hybrid. Due to the increased price in the Toyota Camry versus the Corolla, drivers can expect more power, more exclusive features, and a larger overall body style. With that said, let’s jump into a price list for each configuration below.

Following is a list of starting prices for each 2022 Toyota Corolla configuration:

Lastly, here is a list of the starting prices for each 2022 Toyota Camry configuration:

Finally, let’s take a look below at some of the differences outside of price associated with both the Toyota Camry and Corolla models.

At first look, the Camry and Corolla may seem close to identical in terms of power, performance, and overall aesthetics. Yet, with the 18 different configurations and many optional features, both models have various aspects and additional components available.

One of the most apparent differences between the Camry and Corolla is size. The Camry is roughly 192 inches long, and the Corolla is about 182 inches in length. With that extra length, the Camry offers more spacious interior room than the Corolla and more overall cargo space. For example, the 2020 Camry has a cargo space of 15.1 cubic feet, and Corolla’s cargo space is only 13.1 cubic feet. Also, the Camry’s curb weight is 3,310 to 3,595 lbs, as the Corolla’s is 2,910 to 3,150 lbs. Generally, drivers might prefer the Corolla over the Camry for its lower price point and superior fuel efficiency. Yet, the Camry engine does offer higher horsepower and torque output for those seeking more overall power.

Both models have slight differences in fuel efficiency, with the 2022 Camry listed as 28 city and 39 highway. In comparison, the 2022 Corolla has a listed mpg as 31 city and 40 highway. This small difference seems almost obsolete in the Camry due to its larger engine and overall body size. Feel free to reference our engine specs listed above for more differences in both models outside of size, fuel efficiency, cargo space, and performance value.

The Toyota Camry and Corolla names are synonymous with exceptional reliability for a reasonable price. Both models are consistently ranked within the top 5 for their respected categories (Camry being categorized as mid-size, and the Corolla placed in the compact class). Generally, drivers report a smooth experience with both models reaching high mileage without severe or costly repairs. Consumers expect to reach the 150,000-mile mark in both models without having excessive maintenance or significant issues. However, no engine is perfect, and a lot of engine longevity relies on proper repairs and maintenance. Aside from the problems and issues we list below, we would have to rank the current generation of Camry and Corollas as reliable, great choices for dependable engines.

Various recalls have been issued for both the Toyota Camry and Corolla. Most recently, Toyota has recalled 227,000 Camrys due to brake system issues. Also, the Corolla has experienced recent recalls, including rear seat belt locking issues for 2018-2020 models. These may be glaring safety issues on paper. However, both models have an exceptional design in terms of safety and reliability. Regardless, both engines can have various problems. In summary, we will look at some of the most common reporter problems and top complaints about both the current generation Camry and Corolla below.

Issues ranging from minor technical problems to complaints about speed control systems can occur in the 2021 Toyota Corolla. Yet, it’s important to note that not all these issues may be present for many current-generation Corolla drivers. However, they are prominent enough for us to examine and report.

High Oil Consumption: One of the most commonly reported issues for the newer Corolla models is high oil consumption and various oil leaks. It may be hard to identify the source of these leaks or consumption issues, leading up to costly diagnostic tests and repairs and too much time spent in the repair shop.

Transmission Problems: Unfortunately, some drivers report transmission slipping, clunky transmissions, and difficulty shifting within their current generation Corollas. Transmission issues can progress into some of the most expensive repairs for a car, especially if requiring complete replacement.

Engine Starter Issues: Engine starter issues are commonly cited as a major reoccurring issue with many current generation Corollas. Corroded or weak batteries can be a catalyst for starter issues. Yet, more severe issues such as broken alternators, broken starter motors, defective sparkplugs, clogged air filters, and fuel pump failures can also cause starting issues. Therefore, diagnosing this problem alone can be extremely annoying and costly.

Again, not all of these problems listed below will occur in every current-gen Toyota Camry. Yet, they are commonly reported enough for us to examine and discuss.

Tire Problems: Many drivers report that the newer generation of Camrys is not outfitted with quality tires from the dealership. This can result in a rough driving experience and a lack of driver safety in certain road conditions. Unfortunately, many Camry drivers have to completely replace their tires way before normal expectations. Regardless, it is imperative to replace tires as soon as possible rather than continue to drive on unsafe tires.

Electrical System Issues: Various electrical issues ranging from broken Bluetooth and audio components all the way to a faulty cruise control system have been reported by various Camry drivers. Many dealerships will recognize these issues as factory defects and offer speedy repairs under warranty. Yet, for drivers without a warranty, these technical problems can become costly unexpected repairs.

Braking System Problems: Components within the brake vacuum pump have been reported as faulty, causing Toyota to recall 227,000 Camry models from the 2018-2019 production years. A broken brake vacuum pump does not mean the entire braking system is worthless, and most cars will continue to stop safely. However, this issue can progress into a severe safety flaw that potentially can render the braking system useless.

Many of these issues, especially those relating to safety, may seem like huge red flags regarding reliability and durability. Yet lots of these problems can be deterred with proper upkeep and maintenance. In fact, both the Camry and Corolla generally rank very highly in terms of safety and reliability. Just another reminder that no car is perfect, every engine has its flaws, especially with high mileage and wear over time.

The Camry and Corolla are some of the best-selling models internationally for a good reason. Because these models are economical and practical choices, balanced with above-average features and overall performance, they continue to reign supreme on the modern automotive market. In addition, both the 2022 Toyota Camry and Corolla rank highly in terms of safety. However, Toyota did recall nearly a quarter-million Camrys in both 2018 and 2019 models due to issues with the braking system. The most problematic years for the Camry are 2008, 2013, 2014, and 2015 due to the comparably high number of reported engine problems. Some of the issues we listed are a product of improper car care; however, some are also direct issues from the dealership that should cause consumer concern.

With that said, we have to reiterate the positive values behind both the Toyota Camry and Corolla and their various configurations. Both models have extremely high overall value for great affordability. Excellent gas mileage, durability, reliability, and practicality are all synonymous with the Toyota Camry and Corolla. These cars have been and will continue to be a standard that other auto manufacturers aim to achieve.

In conclusion, it’s hard to identify many glaring flaws with either of the globally best-selling models from Toyota without scrutinizing them immensely. We love the practicality, reliability, and affordability of both the Camry and Corolla models. They are an excellent choice for anyone seeking a reliable daily driver.

Let us know in the comments below what your preference is between the Camry and Corolla models and if you think these extremely popular sedans live up to their hype and popularity.