Throughout the lifespan of both the Toyota 86 vs Subaru BRZ, they have mirrored each other with extreme similarities. Both of these rear-wheel-drive sports applications are meant to optimize power and performance while sustaining affordability. Certain components of both the 86 and BRZ are essentially identical, however, they do vary in some crucial ways. Sure, some of the aesthetic differences are blatant to any driver’s eye. Yet, throughout this guide, we aim to identify some of the more scrutinous differences and reasons drivers may prefer one over the other.

The Toyota 86 and Subaru BRZ are 2+2 sports cars simultaneously developed by both manufacturers. Interestingly, the Toyota 86 was first introduced essentially as the Scion FR alongside the Subaru BRZ in 2012. The inspiration for the Toyota 86 is derived from the previous AE86, with Toyota aiming to build a compact, sporty, front-engine, and rear-drive variant to market alongside the Corolla.

The Toyota 86 comes in two different configurations, the base labeled the “limited” edition alongside the higher priced “premium” edition. Both editions of the 86 come with a 2.4L 4-cylinder boxer engine. Variations throughout both trims such as audio upgrades, different wheels, and various aesthetic differences are what sets these models apart.

It’s hard to find much of a difference in either model’s overall aesthetics, with only slight variations in a few design components. Two of the identifiable differences are the slight variation in LED headlights and design differences in the front grill. Aside from those marginal differences the Toyota 86 and Subaru BRZ are once again nearly identical. Some may consider the Toyota 86 to have a sportier or more aggressive front-end than the Subaru BRZ, however, we’ll leave that up to the readers to judge.

The interior cabins are almost identical apart from slight branding differences. Each model has a 7.5-inch touch-screen display system.  Mostly every component from the air vents to the seats themselves, and even the pedals are identical. 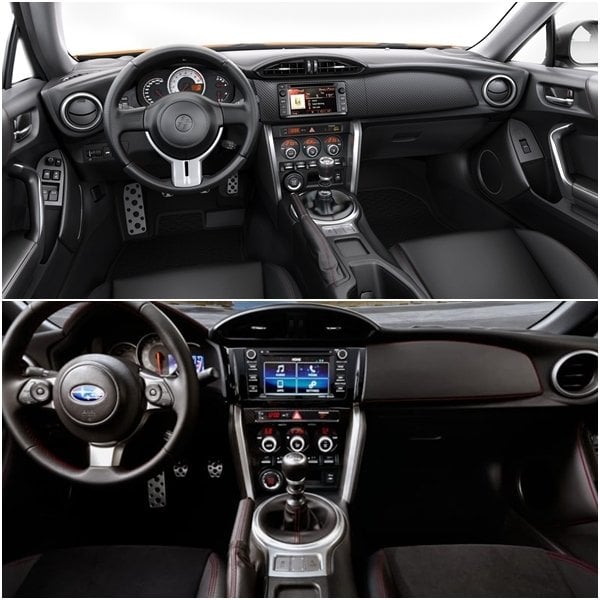 Due to the fact that these models are essentially twins, it may be difficult for many drivers to spot any differences. Yet, let’s take a look at some performance reviews and try to identify further differentiating details in the following sections below.

As mentioned previously, both the Toyota 86 and Subaru BRZ have a 2.4L 4-cylinder engine. The Toyota 86 produces 232 horsepower with 184 lb-ft of torque. This is a slight edge over the Subaru BRZ, as the BRZ has an output of 228 horsepower with 184 lb-ft of torque. Furthermore, drivers generally report that the Toyota 86 has superior acceleration when compared to the BRZ. These may be marginal differences on paper to many drivers. Yet, some drivers may find that the 86 has a slight edge in terms of cornering, acceleration, and overall power due to these slight advantages. The fact that the Toyota 86 is also 15 pounds lighter than the BRZ may contribute to the small benefits in handling.

Another engine spec differentiation between these two models is the compression ratio. The Toyota 86’s compression is 12.5:1 compared to the Subaru BRZ’s which is 13.5:1. Again, these may not be largely substantial differences, yet when comparing the nearly identical 86 versus the BRZ any variations are noteworthy. In summation below are some of the basic power specs of the 2022 Toyota 86 and the 2023 Subaru BRZ:

With some of the performance dynamics laid out, let’s jump into some identifiable differences in terms of available warranties and the overall reliability of both models.

When on the hunt for a new car, a warranty can be a high priority for most drivers. Both the Toyota 86 and Subaru BRZ come with the same warranty. This includes a 3-year/36,000-mile warranty, with a 5-year/60,000-mile warranty specifically for the powertrain. Overall both of these models are considered to be average to above average in terms of overall reliability. Toyota has maintained high standards for many of its modern applications in terms of durability and longevity. Due to the fact that the Subaru BRZ is almost identical to the 86, it maintains some of those high standards of overall reliability. Yet, no engine is perfect. So let’s jump into a list of some of the most commonly reported problems for both models below.

Fortunately, the newer era of both of these models does not have a multitude of reported problems. However, check back as more time passes for a follow-up regarding major issues that may be uncovered throughout time. Yet, below is our list of the top 3 recurring problems for the Toyota 86 & Subaru BRZ throughout their history in the market. Again, these are mostly problems affecting models produced before 2021, and those experiencing high mileage and wear over time.

This problem has been specifically reported to be most prominent in models produced between 2016 to 2020. Drivers report irregularity in their revs and an unstable idle. Unfortunately, this is not a problem deterred by proper maintenance and upkeep and requires a timely repair. However, a simple ECU reprogramming should fix any issues with your stock ECU functioning improperly.

Many Toyota 86 and Subaru BRZ drivers have reported malfunctioning fuel pumps, or fuel pumps dying prematurely on them. Symptoms of this issue can range from a whining or chirping noise emitting from the pump, engine sputtering, stalling, not starting, or loss of fuel efficiency. Therefore, it is essential to repair any fuel pump issues before they create more nagging reoccurring problems or place drivers in hazardous conditions. Neither Toyota nor Subaru have recognized this issue regardless of the ample consumer reports regarding faulty fuel pumps. Therefore, if any drivers experience the symptoms listed above a fuel pump replacement may be crucial in order to extend engine longevity.

Various nagging oil leaks or oil consumption issues can arise in many different cars. However, the oil drain plug seems to be a source of issues for many Toyota 86 and Subaru BRZ drivers. This can be due to over-torquing or aggressive driving, or simply faulty components and low-quality construction. If the source of your oil leak is located at the bottom of your oil pan, the catalyst very well may be a cracked oil drain plug. Fortunately, a replacement of the cracked drain plug should eradicate the issue.

It is also essential to note that Toyota and Subaru recalled 400,000 cars due to valve spring failure. This issue is most commonly found in early production years, specifically prominent in the 2013 production years. Various symptoms of valve spring failure can range from excessive valve noise, compression loss, and further severe engine damage. Therefore, it is crucial to fix any faulty valve springs quickly before more costly and time-consuming repairs are required.

Various additional issues may arise for 86 and BRZ drivers. Below is a quick list summarizing some of the most common issues reported by drivers for both models throughout their different production years:

When identifying any variations between the Toyota 86 vs Subaru BRZ, it’s hard to be too scrutinous or favor one model over the other due to their near-identical makeup. However, there are some minute noticeable differences between the two. As previously mentioned, some drivers may favor the Toyota 86’s slightly more stylish honeycomb grille and headlights. Furthermore, the 86 does have a very slight advantage in terms of 4 more horsepower than the BRZ, as well as being 15 pounds lighter. The 86 does have a marginally faster 0-60. Also, the BRZ has an engine compression ratio of 13.5:1 versus the 86’s 12.5:1.

Sure, there are slight variations in aesthetics and some drivers may even report a slightly noticeable difference in the driving experience. The acceleration in the 86 might have an advantage due to our listed power specs. Some online drivers report better cornering and an easier ability to maintain high speeds between the Toyota 86 vs Subaru BRZ. Yet, in totality, both of these models are nearly identical from head to toe. They even have the exact same warranty for drivers looking to purchase a new model.

Regardless, some of these slight differences may be enough to sway a driver to favor one model over the other. In reality, it seems that Toyota and Subaru have teamed up to produce a 2 Liter 4-cylinder engine with a sporty driving experience and a balance of affordability. The automotive market may have needed the Toyota 86, but it may have needed the Subaru BRZ. Yet, drivers may have been content without two of these twins. Throughout this Toyota 86 vs Subaru BRZ guide, we’ve aimed to highlight and showcase the differences of each model, yet it seems we may have reaffirmed how similar they truly are.