The Toyota 5.7 is one of the most reputable and respected SUV/Truck engines in the modern automotive market. Toyota has utilized the 5.7 for the past 14 years. With extreme reliability and exceptional performance capabilities, it is difficult to find too many flaws associated with these engines. However, no engine is perfect or entirely bulletproof. Therefore, throughout this guide, we will identify and discuss the various pros and cons connected to the Toyota 5.7 V8.

Just a note, the Toyota 5.7L V8 is also known as the 3UR-FR engine. The Toyota 5.7L 3UR-FE utilizes aluminum heads and blocks, helping lower curb weight for the largest displacement engine in Toyota’s UR family. The 5.7L V8 was designed for Toyota’s heavy car and truck applications. Unfortunately, the growing demand for more fuel-efficient engine systems may be a harbinger of the demise of the Toyota 5.7 V8 engine. One of this system’s blatant weaknesses is its lack of fuel efficiency. Regardless, the structural integrity and performance value of the 3UR-FE are undeniable.

With that said, let’s now take a look at the basic engine specs of the Toyota 3UR-FE, as well as a collective list of its applications in the following sections below. 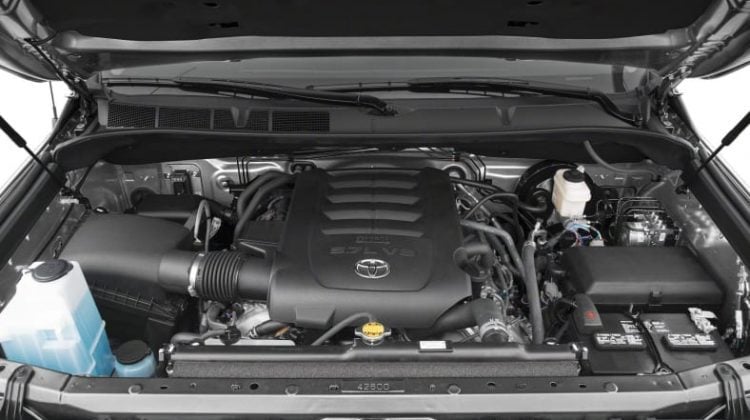 Basic engine specs for the Toyota 5.7L V8 engine are as follows below:

As previously mentioned, the Toyota 5.7L V8 has the largest displacement of any engine in the Toyota UR series and was designed to be applied to larger Toyota cars and trucks. The progressive design of the 3UR-FE was built to replace the 4.7L 2UZ-FE. Like its predecessors, the 3UR-FE utilizes an aluminum cylinder block with a 90-degree V angle structure. Also, every Toyota UR engine has a 94mm bore.

This design uses aluminum alloy headers, with four valves per cylinder, and dual overhead camshafts. Also, there is no direct injection throughout the 3UR-FE. Instead, the engine utilizes a sequential fuel injection system. This 5.7L V8 contains three noteworthy Toyota technological systems: Dual Variable Valve Timing-intelligence (Dual VVT-i), Acoustic Control Induction System (ACIS), and Toyota’s DIS (Direct Ignition System). These engines are highly respected for their reliability and durability, values that we examine and discuss further below within this guide.

Now that we have a better understanding of the Toyota 3UR-FE’s engine specs and overall design, let’s take a look at a complete list of its model applications below.

What Cars use the Toyota 3UR-FE Engine?

Again, this engine was designed to be applied to Toyota’s heavier cars and trucks. The 381 horsepower and 401 lb-ft of torque are considered ample or respectable enough for many applications. Therefore, many Toyota enthusiasts consider these engines to be not only reliable but versatile. Now, let’s take a deeper dive into the overall reliability of the 3UR-FE engine, including some of its most commonly associated problems.

The 3UR-FE is considered to be the most reliable engine in the Toyota UR engine series. Extensive reliability testing reaffirmed how strong the durability of this engine truly is. Many drivers anticipate their Toyota 5.7 V8s reaching upwards of 300,000 miles without severe or costly repairs. However, reaching these higher mileages is absolutely dependent on proper maintenance and upkeep (i.e. the usage of high-quality fuel and oil, as well as timely oil and oil filter changes.) Yet, no engine is entirely bulletproof or perfect throughout, including our 3UR-FE.

Problems such as high oil consumption due to faulty piston oil rings are common for many drivers. Sure, oil consumption increases over wear and time. But, this problem is more reoccurring than anticipated for many Toyota 5.7 V8 owners. Therefore, it’s essential to keep a keen eye on your oil levels to deter further engine damage and extend your engine’s lifespan.

Additionally, the 3UR-FE has common problems surrounding its crankcase ventilation system sensor. Aside from that problem, a variety of electrical components lack the structural integrity to be considered extremely reliable. Furthermore, leaking water pumps are also known to be a present and nagging issue for many Toyota 5.7L V8 owners. However, we again want to reiterate the 3UR-FE is one of the most reliable engines within this specific Toyota engine series.

For more information regarding the overall reliability of this engine system and its most commonly occurring issues, check out our previously published article on the 3 Most Common Toyota 5.7 V8 Engine Problems.

Many of the Toyota 5.7L V8 applications are both rugged and practical. Therefore, many drivers may be seeking out the appropriate modifications or upgrades to boost their 3UR-FEs capabilities. Throughout this section, we will focus on the most popular modifications to boost power and performance for your Toyota engine system. Our collective list of upgrades below will progressively become more time-consuming and costly. Yet, it’s important to reaffirm that bigger gains are met with a collection of supportive mods, a good tune, and proper installation methods. Finally, let’s jump into our list of modifications that help drivers get the best bang for their buck.

Firstly, like many of the engines we’ve examined, a cold air intake is a quick and cost-effective modification that helps boost power. Promoting positive airflow is directly tied to promoting overall engine power. It’s important to note that many stock models that utilize the 3UR-FE come with restrictive air intakes and will benefit from an upgrade. However, as previously stated, more substantial power gains will require further supportive mods and a good tune alongside upgraded intake. It’s best to stick to reputable manufacturers, such as K&N, Spectre, Injen, and other respected companies. Our golden rule for aftermarket parts is, “you get what you pay for.” Sure, there are a plethora of inexpensive cold air intake options on the market today. Yet, spending a bit extra on your aftermarket parts can often ensure better structural quality and engine longevity.

This leads us into our next more costly and severe repairs, upgraded headers. Again, we find ourselves trying to promote more efficient airflow. Upgraded tubular headers often offer better overall airflow than stock manifolds. This is especially true for the Toyota 5.7L V8 engine system. The faster exhaust emissions can exit the car, the more power that can be generated by the engine. Therefore, upgraded headers can be an essential component in garnering those bigger horsepower and torque gains.

The E.C.U, engine control unit, is responsible for controlling the engine’s electronic components. Upgrading the E.C.U to a performance aftermarket option can directly generate more overall power. This modification will create a more aggressive fuel and spark delivery, allotting the engine to output more power. Again, it’s necessary to reaffirm the importance of purchasing a high-quality aftermarket product. When considering a performance E.C.U stick to reputable companies and try not to compromise quality for an attractive price.

It’s important to note that one of the more extensive, yet often applied modifications is supercharger kits. This upgrade is often considered to be the last option for many drivers due to the expensive costs and potentially overwhelming installation methods. Turbochargers force more air induction into the engine from the intake. Again, allowing the engine to generate more power due to promote airflow. TRD supercharger kits were produced by Toyota for many of their available models, essentially making it the best if not the only option for many 3UR-FE models. Before concluding our guide with our Toyota 5.7L V8 summary, we must reaffirm the importance of supportive mods and a good tune. Without a collection of well-researched and appropriately installed modifications, drivers won’t see substantial gains and may also contribute to a fast degeneration of their engine’s lifespan.

Regardless of the problems we highlighted above and throughout previous articles: the Toyota 3UR-FE is considered to be the most reliable engine variant within its series. Therefore, our verdict on the overall reliability of this engine stands at above-average to good. The lack of plentiful fault-prone components lets drivers reach high mileage without time-consuming and extensive engine repairs needed. In conclusion, these engines possess great potential for a long lifespan with many drivers easily reaching 250,000 to 300,00 miles.

A robust and extremely capable engine, Toyota enthusiasts and car enthusiasts alike recognize that this engine demands respect. This engine has certainly accomplished Toyota’s goals of providing ample V8 performance value throughout Toyota’s larger cars, trucks, and SUVs. Regardless of some of the older technology used, the 5.7L V8 models are still in high demand. Due to the exceptional engine design, these Toyota systems have stood the test of time. So, let’s appreciate the joy that these naturally aspirated V8s offers while they’re still available on the automotive market.

In addition to the Toyota 2JZ, and Hybrid Prius engine systems, the 5.7L V8 is one of the most respected engines produced by the manufacturer. So does the fact that Toyota has done little to improve fuel efficiency or overall power of these V8s since their introduction in 2007 deter from their value or reaffirm their timeless design? We’ll leave that up to the drivers to decide.

Let us know in the comments below your experiences with, or your opinion on, the Toyota 5.7 V8 engine!