The Toyota 3VZE 3.0L V6 engine made its debut in the 1988 4Runner and Pickup. It’s the first engine larger than an inline-4 to make an appearance in either model. However, the 3VZE only delivers 150hp and 180 lb-ft of torque. That’s not horrible by 1980’s and 1990’s standards, but it still isn’t much power regardless of how you look at it. Top top that off the Toyota 3.0 V6 truck engine doesn’t have the best rep for reliability either. Though, it’s not all bad for the 3VZ V6. In this guide, we’ll discuss Toyota 3VZE engine problems, reliability, specs, and more. 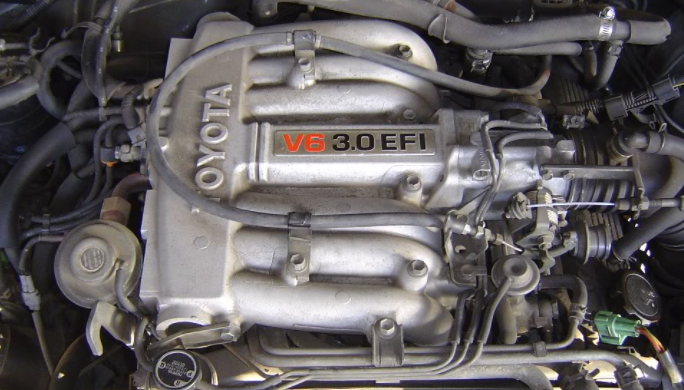 Specs for the Toyota 3VZ-E engine are as follows:

Well, we don’t intend to be too harsh on the 3VZE engine, but none of these specs are impressive. It’s a pretty underwhelming engine to power larger vehicles like the Toyota 4Runner and T100. A cast iron block does offer good strength. However, the combination with an aluminum cylinder head causes serious issues with the 3.0 V6 head gaskets. A problem we’ll discuss in a few sections.

Anyways, these are pretty average specs otherwise. Toyota previously used inline-4 engines in their trucks and 4Runner. This engine was actually an attempt to offer something larger and more powerful. Unfortunately, a low compression ratio and SOHC don’t help this engine performance wise. There are a few common mods to help beef up the 3VZE engine a little bit, though.

Toyota 3.0L V6 engines are in the following year and model trucks:

*Despite sharing the same engine family the 3VZE and 3VZ-FE engines have few things in common. As such, this article is only relevant to the Toyota 3VZ engine in the above outlined trucks.

One primary goal with the 3VZE engine was to offer good performance, but better fuel economy than the larger American V8 truck engines. The 3.0 V6 did deliver on the latter. Many owners see gas mileage of 14-16mpg around town and 19-21+mpg on the highway. Once again – nothing too impressive by modern standards. Fortunately, there are a few things that can help improve Toyota 3VZE power, torque, and fuel economy.

Alright. Why are we adding this section here? EGR delete discussions are popular in the Toyota 3VZ-E world. The EGR (exhaust gas recirculation) system works exactly as it sounds. It’s responsible for recirculating exhaust gases back through the 3VZE 3.0L engine. The idea is to reduce harmful NOx emissions and increase engine efficiency.

This is a loaded topic, and something that’s likely best addressed in a post of its own in the future. Nonetheless, deleting the EGR system is a hot topic on the Toyota 3VZ. Some claim they notice better power and fuel efficiency after deleting the EGR. Options like this LCE Performance EGR Block Plate Kit are a popular choice at $20.

We don’t think deleting the EGR out of the blue is the best option. The Toyota 3VZE EGR is known to fail, and the part typically costs $120+. At this point it might make sense financially to opt for the EGR block plate kit. We don’t fully agree with it adding any power or improving MPG on the 4Runner or T100. However, it’s a possible side benefit if you need to address an issue with the system.

A few basic bolt-on mods can help wake up the 3.0 V6 Toyota engine. However, as a NA engine don’t expect any massive power gains. An exhaust system or headers can help add a bit more power and torque, especially in the mid-range. Intake or filter upgrades might also help a little bit, too.

Some also consider forced induction like a Toyota 3VZE supercharger or turbo kit. It’s certainly not worth the cost or hassle in our opinion. The engine just has too many limiting factors like a poor flowing SOHC. The costs of a 3VZE supercharger or turbo kit would likely exceed an engine swap. If you’re really dying for more power from the T100 or 4Runner an engine swap is the best bet.

The above is a quick video of a turbo kit on a 3VZE engine. It’s a unique build and not something you come across often. Point is – turbo or supercharger kits can be done. However, a quick read of the description indicates this 3VZE 4Runner owner agrees it’s not really worth the time or money.

With the age of the 3VZ engines now days a simple tune-up is likely the best bet. This isn’t going to help the engine make more power than it did from the factory. Still, engines are prone to losing power and performance over the years. Chances are a lot of 3VZ-E 3.0L V6 engines aren’t actually making 150 horsepower anymore.

A few of the most common 3VZE engine problems include:

We’ll discuss the above issues in greater depth below. However, we must diverge to add a few quick notes beforehand. We may not specify every time, but we’re considering these the MOST common problems with the Toyota 3VZE engine. That doesn’t always mean they’re common in the true sense of the definition. Rather, when issues or failures occur these are a few common areas.

The 3VZE hasn’t earned the best reputation for reliability. It’s also an old engine and that brings more reliability concerns and potential engine problems. Anyways, we’ll also circle back to 3VZ-E reliability towards the end of this article. For now, let’s examine a few of the common flaws with the Toyota 3.0 V6.

Head gasket problems are one of the most common issues with the 3VZE engine. It’s without question a big topic for this engine. The Toyota 3VZE head gaskets are responsible for sealing the gap between the block and cylinder head. In 1990, Toyota re-designed the head gasket to not include asbestos. Good change for health reasons. However, asbestos is great at resisting heat and heat is a big problem when sealing the gap between different metals – iron and aluminum.

Toyota likely should have used more molybdenum on the 3VZE head gaskets with the new design. However, it’s an expensive material and not enough was used. Long story short – this led to huge problems with the 3.0L V6 head gaskets. Enough of an issue that Toyota extended the cylinder head gaskets warranty coverage to 8 years and 100,000 miles.

The 3VZ head gaskets were also re-designed again to act as a long-term solution to failures. Changes include more molybdenum, more port spacing, and bore grommets. If your Toyota 3VZE head gasket was replaced after 1997 this shouldn’t be a big concern. Of course, failures can and do still occur but the new part is much better.

This will be a quick topic. Most modern cars use timing chains, which don’t require much maintenance or service during the life of the engine. However, older engines, like the 3VZE 3.0, often use timing belts. They’re standard maintenance items that usually need to be replaced every 80,000 to 100,000 miles.

It is a more concerning topic on interference engines where these is overlap between valves and pistons. Fortunately, the 3VZE is a non-interference engine so there isn’t much concern of additional damage if a belt does snap.

*Water pumps lie behind the Toyota 3.0 V6 timing belt. It may be a good idea to replace the water pump while doing the timing belt job.

Anyways, this is a very minor issue in the grand scheme. Starter contact problems on the 3VZE are worth the mention since they’re pretty common especially with the old age of the engine.

Yet another flaw with the Toyota 3VZE engine is burnt exhaust valves. This likely isn’t as common as some may lead you to believe. However, it’s still a pretty detrimental issue that may spell the end of the 3.0L V6’s life. The repair bills on a burnt exhaust valve likely aren’t worth the cost on a 25+ year old engine. Or if you’re committed to the repair it’s probably time to consider a more extensive rebuild of the 3VZ.

Symptoms can be hard to detect but power loss is a major symptom of a burnt exhaust valve. When the valve(s) is not functioning properly the engine will lose some compression. A compression test is a good way to check if the 3VZE 3.0 engine might have a burnt valve.

Is the Toyota 3VZE engine reliable? Yes and no. We believe this 3.0 V6 Toyota engine earns average remarks for reliability. Relative to other Toyota engine it’s definitely not the best. However, outside of early 3VZE head gasket problems it’s not a bad engine by any means. A decent number of these engines are still on the road even after 25-30+ years.

Of course – as with any engine – maintenance is key. Use quality oils, change fluids on time, and fix issues if and when they occur. Do all of this alongside occasional tune-ups and the Toyota 3VZE can be a great engine. Some of it comes down to luck of the draw too, but we don’t have much control over that.

That said, our biggest concern with the 3VZ 3.0L V6 is age. A 25+ year old engine is going to take some patience and TLC to keep it running well. All engines are subject to wear and tear. Problems that weren’t a concern in 2005 are very possible failures on the now old, high mileage engines. Those committed to owning a Toyota 3VZE engine for the longer-term might consider rebuilt kits.

Rebuild kits like this one from LCE Performance are a good option if you intend to keep the 3VZE 4Runner or T100 truck. At only $525 this kit includes tons of parts. Pistons, rings, bearings, gaskets, timing belt, oil pump, water pump, and freeze plugs are all included. A rebuild kit will hopefully keep the 3VZE engine running well for the longer-haul.

However, it’s important to keep in mind it’s not a job for the faint of heart. Install on one of these kits is labor intensive and can quickly add up to $1,000-1,500+ at a repair shop. Capable DIY’ers might find 3VZ rebuild kits a great and inexpensive option, though.

What’s your experience with the Toyota 3VZE engine?