Toyota first introduced the 3MZ-FE engine in 2002. It was a replacement for the 1MZ-FE in some models while others offer both engine options. The 3MZ FE is a DOHC 3.3L V6 engine featuring VVT-i. It shares the same base design as the 1MZ engine, however the 3MZ is slightly larger with a higher compression ratio. Toyota 3MZ-FE engines deliver a respectable 230 horsepower and 242 lb-ft of torque.

Overall, the 3.3L V6 from Toyota is a solid engine. No engine is perfect, though, and that applies to the 3MZ. In this guide, we’ll discuss some common Toyota 3MZ-FE engine problems and reliability. We also dive into specs and other info regarding the 3.3 V6 engine. 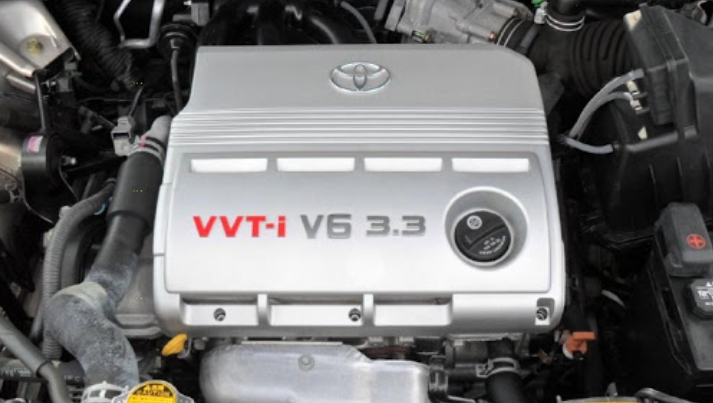 Specs of the Toyota 3.3L V6 engine are as follows:

The base design of the 3MZ is the same as that of the 1MZ engine. Toyota increased the displacement by increasing the cylinder bore, but stroke remains the same. An increase in cylinder bore helps the engine with top-end power. Compression increases from 10.5 to 10.8 to 1 thereby assisting in torque delivery.

Additionally, the 3MZ-FE adds VVT-i taken from the same design as the later model 1MZ-FE engines. This also helps with performance bringing figures to a solid 225-250 horsepower. By modern standards it may not sound like much. However, the 3MZ remains a moderately powerful engine for its era.

What Cars Use the Toyota 3MZ-FE?

The 3MZ engine is found in the following Toyota and Lexus models:

With some of the background info out of the way let’s dive into a few common issues with the Toyota 3MZ-FE engine:

We’ll discuss these 3MZ-FE engines problems throughout the rest of this article. At the end we wrap it up with thoughts on Toyota 3.3 V6 reliability. However, it’s a good time to add a few notes before moving on. We’re talking about an engine that’s pretty reliable overall. It’s also a 12-18 year old engine in most of the cars that use the 3.3L V6. Not all of the issues we’re discussing are actually design flaws. Rather, age and mileage play a role in a few of the Toyota 3MZ problems.

Additionally, we’re referring to these as the most common problems for a reason. It doesn’t mean they affect a large number of engines. Instead, when issues do arise these are a few common areas. That said, let’s jump in and discuss the above bullets in-depth.

There aren’t any major design flaws with the 3MZ-FE that cause common oil leaks. However, gaskets and things of the like do degrade and become brittle with age and mileage. Don’t assume low mileage examples are exempt since age can often be just as tough on rubbery parts.

Valve cover gasket leaks will be our primary focusing moving forward. Though, the Toyota 3.3 V6 engine may run into other oil leak problems. A few other areas to consider include the main seals and VVT-i system. They’re less common than the valve cover gaskets, but other oil leaks can and do happen.

Some symptoms of oil leaks on the Toyota 3.3L engine include:

Generally, the symptoms of oil leaks are pretty simple. Oil on the ground or another visible leak is an obvious sign that oil is escaping somewhere. However, it’s not always a common symptom when the Toyota 3MZ FE valve cover gaskets begin leaking. Since the gaskets lie towards the top of the engine the oil doesn’t always make it to the ground.

It may sludge up on the engine block. Otherwise, valve cover oil leaks often drip oil onto other hot parts like the exhaust. This may cause burning oil smells or light smoke from the engine bay. Oil loss is another potential symptom, but it’s typically hard to detect since some oil consumption is natural. You’ll likely notice a visible leak before it causes quick oil loss.

Replacing the valve cover gaskets on the 3MZ-FE engine can be quite a time consuming job. It requires removal of a lot of parts including the intake manifold. The gaskets are very inexpensive, though. Most of the repair cost will come down to labor. DIY’ers can knock out both gaskets for about $50, but it can be a ~$500 repair at a shop.

Due to the labor involved it’s a good idea to consider replacing other parts. Some choose to tackle repairs like the timing belt, water pump, thermostat, and spark plugs. There is overlap in labor with these repairs, so you might consider replacing them.

We’re moving onto yet another issue that really isn’t a true design flaw. However, the timing belt is an important standard maintenance item. Toyota 3MZ-FE engines are interference engines. This means there is some overlap in the area in which the pistons and valves travel. This isn’t a problem when the 3.3 V6 ignition timing is on par.

However, if the timing belt fails then it will possibly allow timing to jump. In severe cases, the belt snaps and ignition timing is thrown all over the place. Pistons and valves then contact each other, which is not good news. Best case – you’ll end up with some belt valves on the 3MZ-FE V6 engine. Further damage is possible if any metal splits and damages other parts.

It’s a lot of potential damage caused by the 3MZ-FE timing belt if it fails. Again, this isn’t a super common issue or design flaw with the engine. That doesn’t mean you should ignore this as a possibility, though. Ensure you’re staying on top of timing belt changes on the 3.3L V6 Toyota engine. When the belt is close to the end of its recommended replacement interval then it’s also a good idea to visually inspect the belt.

Look out for the following symptoms that may indicate a problem with the Toyota 3.3 engine timing belt:

Timing belts can be tough since there aren’t always noticeable symptoms prior to complete failure. That’s part of the reason visual inspections are a good idea. Check for any signs of excess wear or slack in the Toyota 3MZ-FE timing belt. You might notice odd sounds – like ticking or slapping – before the belt gives out.

Otherwise, once timing jumps or the belt snaps you’ll notice a plethora of symptoms. Misfires, check engine lights, and power loss might mean timing has jumped off a little bit. If the 3.3L V6 belt snaps then the engine will likely shut down or experience severe problems instantly.

Given the timing belt is standard maintenance it is designed to be a fairly simple repair. However, it’s still a tough part to access and less experienced DIY’ers should consider leaving this to a pro. Labor can add up, so it’s a good idea to consider other parts to replace in the area.

Water pumps and thermostats are always a good idea. Some recommend replacing these every time the belt is done. A water pump failure can actually take the belt with it and therefore cause even more damage if pistons and valves collide.

Alright. We’ll move a bit quicker on this section. Sludge build-up was a bigger issue on the older 1MZ-FE engines. However, it can and does affect some 3MZ engines too. For most it should be a non-problem on the Toyota 3.3 V6 engine.

The primary cause of sludge build-up on the 3MZ-FE is poor oil quality or too long between oil changes. In 2004, Toyota actually changed oil change interval recommendations from 7,500 miles down to 5,000 miles. Even with synthetic oils it’s a good idea to stick on the lower end of that range.

Faulty PCV systems are also a big factor in sludge build-up. The PCV lies within the valve cover, so check it out if you’re in there for work. Otherwise, stick with quality oils and change the oil on time. Do this and problems with sludge build-up on the Toyota 3MZ-FE 3.3 engine are pretty uncommon.

Is the Toyota 3MZ-FE reliable? Yes, we believe this engine earns above average marks for reliability. It’s not the most reliable engine around relative to other Toyota engines. However, compared to the average engine the Toyota 3.3 V6 is reliable. The engine doesn’t suffer from many major common problems or design flaws.

Age is a big factor, though. The 3MZ-FE is only getting older and that can have a negative impact on reliability. Things like oil leaks become more common as engines age. It’s natural for some parts like gaskets to degrade and begin cracking with age and mileage. Otherwise, the timing belt is an important item to stay on top of. As an interference engine a timing belt failure can cause severe damage if pistons and valves contact each other.

Maintenance is another key to ensuring the Toyota 3MZ-FE 3.3 engine provides good reliability. Use quality oils, change fluids on time, and fix issues if and when they occur. Do all of this and the 3MZ-FE will likely reward you with a fun and reliable life. It’s not uncommon for these engines to make it to 200,000+ miles without many major problems along the way.