Toyota’s 2JZ-GTE twin-turbo engine is probably the most legendary tuner engine of all time. Toyota put it in the MKIV Supra starting in 1993, and it quickly gained a reputation as one of the nastiest and most build-able inline-six motors ever created. Even today, more than three decades after the engine’s original debut in 1991, enthusiasts are still building 2JZs to well over 1,000 whp. As many of them will tell you, f you’re serious about a high powered 2JZ build, you will want to consider upgrading your 2JZ intake manifold.

The Supra intake manifold is more than suitable for stock power levels and average builds, but for those wanting more than 600 whp an aftermarket intake manifold can really help with top-end power. That’s why one of the best 2JZ upgrades is to the intake manifold. You will gain horsepower while shedding weight and improving efficiency. 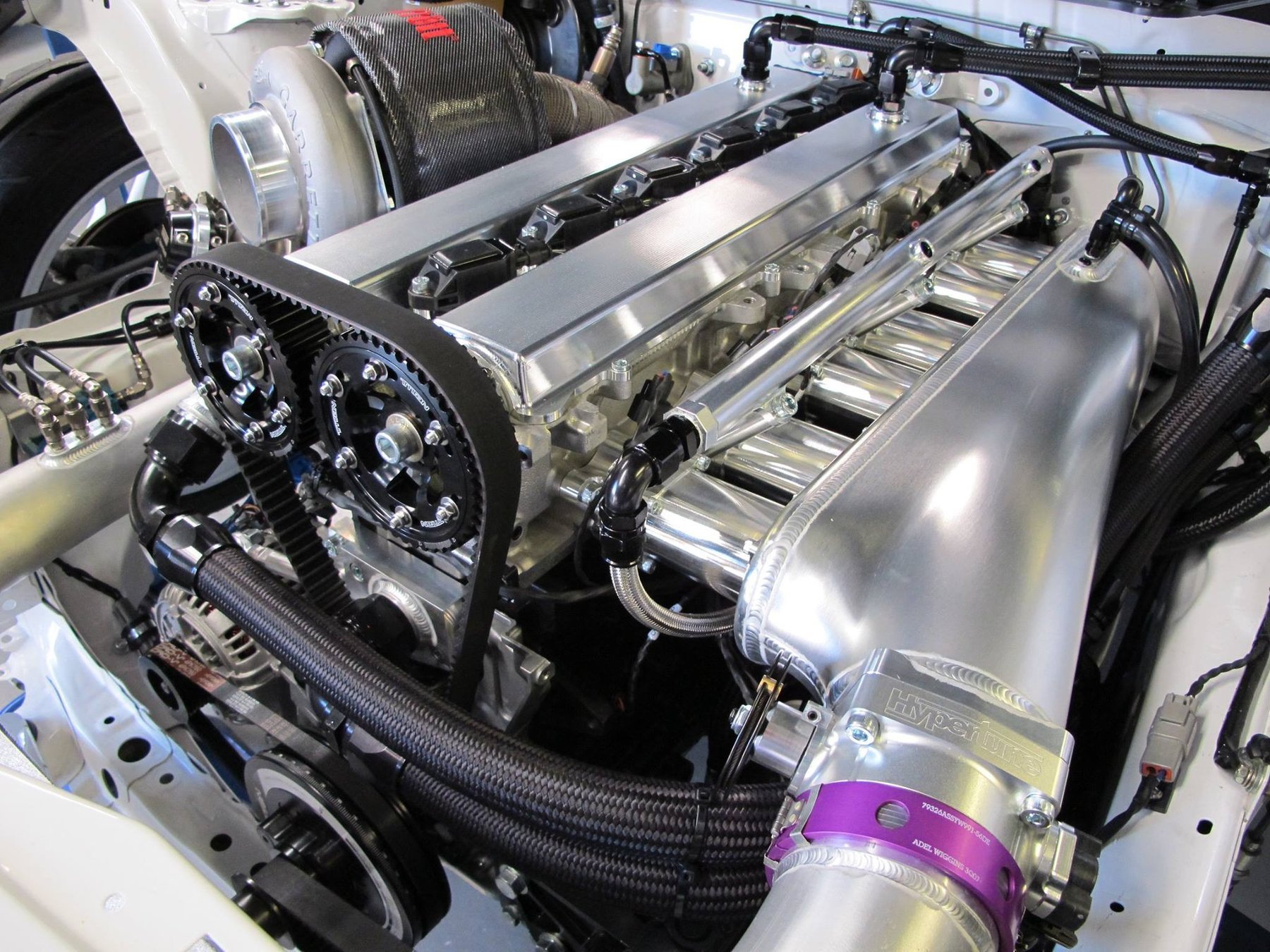 What is a 2JZ Intake Manifold?

Now that we have an understanding of intake manifolds let’s move on to upgrading them.

There are important differences between the stock 2JZ intake manifold and aftermarket versions. The most obvious is going to be the size of the intake runners and plenum. Aftermarket Supra intake manifolds are going to have wider runners to increase flow and decrease restriction. They will also have larger and better flowing plenums.

The wider intake runners will allow for more air to pass through the manifold and into the engine. The better flowing plenum accommodates the shorter but wider runners, while also allowing for proper pulse-reversion control.

Pulse-reversion control, without getting too technical, is a phenomenon of any intake manifold. Basically, when the butterfly valves inside of the intake manifold close, like when a driver lays off the gas pedal, the air inside of the runners is forced back up into the plenum. Properly designed plenums minimize turbulence and allow for smooth reversion of the exhaust pulses back into the runners once the valves reopen. Poorly designed plenums exacerbate turbulence and impede flow.

Aftermarket intakes are also usually made of lighter material than stock versions. Stock 2JZ manifolds are built from heavy cast iron, but most aftermarket manifolds are made from aluminum. Aluminum manifolds are lighter and flow better, making them an obvious choice over cast iron.

When to Upgrade From the Stock Supra Intake Manifold

You probably won’t see much of a benefit at power levels below 600 whp, but from 600 whp – 1,000 whp you will see substantial power increases with an aftermarket manifold. The improved flow and pulse reversion will increase peak power and improve the power band.

It’s important to note that wider and shorter intake runners, like those on many aftermarket 2JZ intake manifolds, have a tendency to push peak torque to higher RPMs. This increases top-end power and the expense of low-end power, and might actually make for a slightly smaller power band. Still, the increase in top-end power is usually worth it, even if you lose some grunt down low.

Overall, you don’t need to upgrade your intake manifold unless you plan on going past 1,000 whp. However, if you do decide to, builds from 600 whp to 1,000 whp will still benefit. We’ll get into how much you can expect to gain a little later, but it’s roughly 40 whp – 70 whp.

The benefits of upgrading the 2JZ intake manifold are:

The biggest benefit to upgrading the 2JZ intake manifold is going to be the power increases. On smaller builds you can see gains of 20-30 whp. Larger builds, those above 700 whp, can add 40-80 whp with an upgraded and better flowing manifold. The increase is going to be more on the top-end than on the low-end, but the majority of the powerband will see increases. It’s impossible to give precise numbers for gains, because every setup is different, but these are averages from Supra builds.

Finally, you will likely see an increase in exhaust volume following the installation of a larger intake manifold. It won’t be drastic, like installing a cat back, but the volume will definitely be louder.

Unfortunately, the 2JZ Veilside intake manifold has not been manufactured since the late-’90s-early-’00s. There are some genuine and rare ones still available in the wild, but it’s not an easy find. Many companies produced knockoff “Veilside style” intake manifolds using supposedly similar dimensions, but they do not perform nearly as well. If you can find one available then it will also likely be pretty pricey – and used.

While the 2JZ Veilsides were certainly solid performers, there’s no reason to go to extraordinary lengths to seek them out. In addition, the “Veilside style” manifolds are cheap clones that should probably be avoided too for the most part. All the 2JZ intake manifolds listed below perform exceptionally, are better than knockoffs, and won’t carry a crazy price tag.

These intake manifolds combine the best in price, performance, quality, and aesthetics. While there are literally dozens of different manifolds available, these are the top options if you’re looking to upgrade. We included both standard and big or race port manifolds in the guide, for the broadest selection possible.

The Hypertune 2JZ intake manifold is one of the most well known in the Supra community. It has been around since the early-2000s and has developed a reputation as one of the top performing manifolds on the market. It is great for mid-range and top-end power gains, and is capable of massive horsepower.

Hypertune offers two different Supra intake manifolds, both a street and big port race style. The street can flow up to 1,500 hp, and the big port is designed for 1,500+ hp builds. The plenums both have velocity stacks to increase airflow velocity. The Hypertunes are sold without fuel rails, but do come with throttle bodies. There is also a 102 mm throttle body, which is a direct fit for the big port version but can fit the standard, too. There is also a 90 mm throttle body for the standard manifold.

The Hypertune intake manifolds are also highly customizable. You can get anodized and powder coating for the plenum, runners, throttle body, and head gasket flange. The Hypertunes are some of the best on the market, and you can see gains of 40-80 whp depending on build size.

The SD intake manifold has lots of great reviews and is a top option in the Supra community. SD redesigned the intake recently to include 1-piece lightweight billet runners instead of fabricated runners. This helps reduce weight and prevents the necessary modification to the stock location fuse/relay box and battery.

SD designed their 2JZ intake manifold to work with the RMR 90 mm throttle body. Gains are approximately 40-80 whp, depending on build size, right in line with the other top performers. The SD runner ports are set up only for six injector setups and not 12.

The VW Supra intake manifold kit comes with a 95 mm throttle body and additional upgraded throttle cable. Importantly, VW charges an extra $150 for their intake manifold if you buy it from scratch. If you send in the lower runners from an OEM Supra manifold they do not charge extra, as they reuse them for the core.

The VW intake manifold performs just as well as the Hypertune or SD manifolds. It was actually shown to outflow the Veilside intake manifold. The VW runners’ ports are set up for street applications and six injectors, and are not 12 injector compatible.

The SP comes with a 75 mm throttle body, which is the closest to stock size out of all our suggested manifolds. You can always put a larger throttle body on there to increase flow if needed. Similar to the Virtual Works manifold, sending in your lower intake runners saves you from extra costs since they reuse them in the core. For SP, the savings is pretty considerable at $400, so it’s something to keep in mind.

Overall, the Sound Performance intake manifold is another top option for 2JZ Supras. It probably won’t flow as some of the other options, but it will definitely be good for mid-range and top-end.

For many years, the RMR intake manifold was the top option on the market with the Veilside. In the late-’90s and early-’00s, they were the most sought out intake manifolds available. Unfortunately, RMR has since discontinued their street version that was 6 injector capable, and only makes the larger race port 12 injector setup now.

RMR designed their intake manifold out of lightweight but durable T6061 aluminum stock. They also engineered it to take the 90mm throttle body from the Ford Coyote 5.0 L V8 engine. It comes with dual fuel rail fittings and fuel rail clamps to accommodate the extra set of injectors.

Flow and power wise, the RMR Supra intake manifold is going to be the absolute top of the line. It is meant for ultra high horsepower builds, and that’s exactly what it delivers. If you have a big 1,500+hp build, the RMR is definitely your best choice.

The 2JZ engine is one of the most legendary motors ever created, and if you really want to make some serious horsepower out of it then intake manifolds are a great mod. You’ll see a considerable improvement to horsepower and torque output, while also making your engine more aesthetically pleasing and lighter.

We looked at a couple of different 2JZ intake manifolds in this guide, and they are all very solid. The Hypertune and RMR manifolds have been on the market the longest and are tried and true options. The Sleeper Designs, Virtual Works, and Sound Performance manifolds are also solid performers that have great reputations in the Supra community. You really can’t go wrong with any of these manifolds, as they are all top options and performers.

What intake manifold are you thinking about picking for your build and what goals are you looking to achieve? Let us know in the comments below!