There is nothing left unsaid about Toyota’s 2JZ engine. Over the past 30 years, it has become one of the most famous engines in existence. Enthusiasts can’t get enough of Toyota’s flagship inline-6 powerhouse for good reason.

Replacing the 1JZ, known for its high power potential and smooth power delivery, the 2JZ is nearly identical in construction. However, the 2JZ is even more desirable due to its 3-liter displacement. With the introduction of the 2JZ platform came multiple variants for use in different cars.

Toyota developed three 2JZ variants beginning in 1991. These variants included the 2JZ-GE, 2JZ-GTE, and 2JZ-FSE. While the 2JZ-FSE has some interesting attributes worthy of discussion, we’ll only be comparing the 2JZ-GE and 2JZ-GTE variants.

Before we cover the differences between 2JZ variants, we’ll discuss their similarities first. Both variants share very similar design philosophies, proving that they truly are blood relatives.

Both the 2JZ-GE and 2JZ-GTE are based fundamentally on the Toyota inline-6s that preceded them. Toyota learned from the 7M-GTE and 1JZ and refined their inline-6 formula through trial and error. Through the success of the 1JZ engine, which was praised in virtually every aspect, Toyota learned that overengineering and solid build construction was important for reliability and customer satisfaction. Toyota carried that thought process into the development of the 2JZ platform.

Both the 2JZ-GE and 2JZ-GTE feature a cast-iron block and aluminum cylinder head, ensuring maximum strength. These are the same materials that were used to construct the 1JZ, cementing it as one of the strongest engines ever built. The 2JZ is also incredibly strong.

Toyota’s use of an over-square design for the 2JZ is beneficial for a few reasons. Primarily, over-square engines tend to have lower peak piston acceleration speeds, which puts less strain on the crank. Combined with the relatively low compression of the 2JZ engine, less extreme forces on internal components lead to a more reliable engine. The over-square design also helps with engine balance, with internal rotational forces canceling each other out.

2JZ-GTEs built for Japan featured a different turbo construction than those made for the rest of the world. Japanese models have CT20 ceramic turbos, while export spec 2JZ-GTEs feature stainless steel CT12B turbos. The addition of turbos on the 2JZ-GTE raised horsepower, over the 2JZ-GE, to 278hp and torque to 320lb-ft.

As the 2JZ-GTE was designed with motorsport applications in mind, it was only used in Toyota’s performance-oriented lineup. At the time, that meant that 2JZ-GTEs were only used in a few of Toyota’s production cars. The only vehicles to receive the sequentially twin-turbocharged 2JZ-GTE are as follows:

The inclusion of turbochargers made the 2JZ-GTE the most in-demand engine in Toyota’s catalog among enthusiasts, as it remains today. The 2JZ-GTE also features some additional upgrades over the 2JZ-GE that make it more desirable.

A key difference between the 2JZ-GE and 2JZ-GTE is their cylinder head designs. As the 2JZ-GTE was designed with forced induction in mind, some key changes were made to the cylinder head to be more supportive of boost.

As mentioned above, both variants of the 2JZ have an aluminum head that both feature electronic fuel injection. However, each head is designed with a different purpose in mind as far as flow is concerned.

In comparison, the 2JZ-GE features smaller intake ports designed to increase velocity into the cylinder at lower RPMs. The smaller ports are also placed higher up on the head to align for a more direct shot into the cylinder. This allows atmospheric pressure to work better.

Overall, it is a contentious debate about which head flows better, as each serves its purpose for the engine it was designed for. However, it must be said that the 2JZ-GTE has much more aftermarket support when it comes to intake and exhaust manifolds. 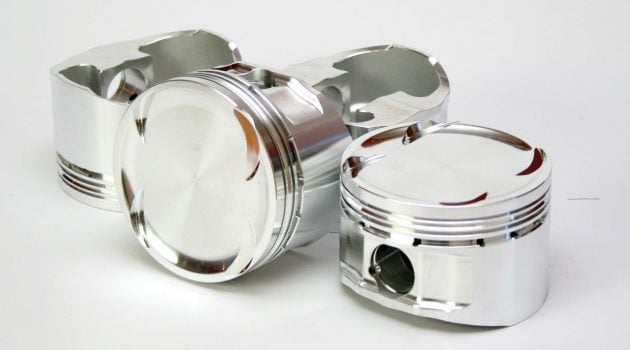 Moving on to pistons. In totality, Toyota 2JZ-GE and 2JZ-GTE pistons are extremely similar in terms of build quality and construction. Both feature hypereutectic cast pistons that feature identical rod construction and build.

A subtle, yet important difference to mention is that the piston rings on the 2JZ-GE are much thinner when compared to the GTE. The difference in piston ring thickness boils down to the additional stress added by forced induction on the 2JZ-GTE.

While the general construction of the pistons on both 2JZ variants is the same, the 2JZ-GTE features recessed piston tops. The purpose of this difference in design is to decrease overall compression in the 2JZ-GTE engine. Lower compression is ideal for turbocharged engines as forced induction creates an excess amount of pressure within an engine. Decreasing compression lowers overall internal pressure, which puts less strain on internal components. This compensates for the increased strain caused by forced induction.

Rounding out the primary differences between the 2JZ-GE and 2JZ-GTE is the presence of cooling oil squirters on the 2JZ-GTE. The primary purpose of block-mounted oil coolers is to cool piston temperatures at high RPMs. As nearly 80 percent of excess heat created by an engine is transferred to the pistons, it is important that their heat is managed. Toyota approached this issue by using oil squirters; technology typically reserved for motorsport applications.

The 2JZ-GTE block has an incorporated port near each cylinder, angled towards the underside of the pistons. The squirter nozzles spray the underside of each piston, opposite the combustion-facing piston head. Stock 2JZ-GTE pistons feature internal channels that allow oil to flow through them. While this process doesn’t increase the strength of the pistons, it does increase reliability.

The reason that Toyota chose to include oil squirters on the 2JZ-GTE and not the 2JZ-GE is due to the excess heat created by forced induction. While a 2JZ-GTE running stock boost would likely be fine without squirters, reliability was a primary focus for Toyota.

While oil squirters are unquestionably beneficial for a stock 2JZ-GTE, their effectiveness on a heavily modified engine is contested. Even though the likes of Formula 1 and NASCAR employ oil squirters on their high-performance engines, construction of those engines is vastly different than that of a 2JZ-GTE. Some argue that the dramatic temperature changes caused by oil squirters can damage the cast-iron block at high boost levels.

In the vast world of 2JZ engine discussions, it is generally concluded that all 2JZ variants are legendary. As the 2JZ-GE and 2JZ-GTE share almost identical DNA, their similarities are more numerous than their differences. With that being said, the 2JZ-GE vs 2JZ-GTE debate continues to this day. At the end of the day, neither variant is likely to let you down.

There are some key differences between the 2JZ-GE and 2JZ-GTE, despite their sibling relationship. Most notably, the sequential twin-turbos on the GTE significantly increase horsepower and torque.

Almost all of the other differences between the two 2JZ variants stem from the presence of forced induction on the GTE. Toyota designed the GTE’s cylinder head for increased intake flow. Recessed piston tops used in the 2JZ-GTE lower compression, making boost safer for internal components. The same ideology is at play when it comes to the GTE’s inclusion of piston oil squirters.

Either way, both the 2JZ-GE and 2JZ-GTE are some of the strongest production engines to date. As a result, there is plenty of aftermarket potential for both, and truckloads of information about each. The 2JZ family is truly Toyota’s inline-6 swan song. Many argue that there will never be anything better.

If you found this article about the Toyota 2JZ-GE vs 2JZ-GTE engines helpful, check out our other Toyota engine articles. You might find our article on the topic of Toyota 1JZ vs 2JZ engines interesting. Otherwise, we have a handy 2JZ-GTE turbo upgrade guide as well. As always, safe driving!