The Toyota 2GR-FKS was first introduced in 2015 as an evolution of the 2GR-FSE 3.5L V6 engine. The 2GR-FKS began as a replacement for the FSE in Lexus models, but eventually made its way into the Camry, Tacoma, Highlander, and several others. It shares the same overall design but adds a simulated Atkinson cycle for better efficiency.

With 278-318 horsepower the FKS engine delivers good performance alongside good efficiency, economy, and reliability. No engine is perfect, though, and that applies here too. In this guide, we discuss Toyota 2GR-FKS engine specs, reliability, problems, performance, and more. 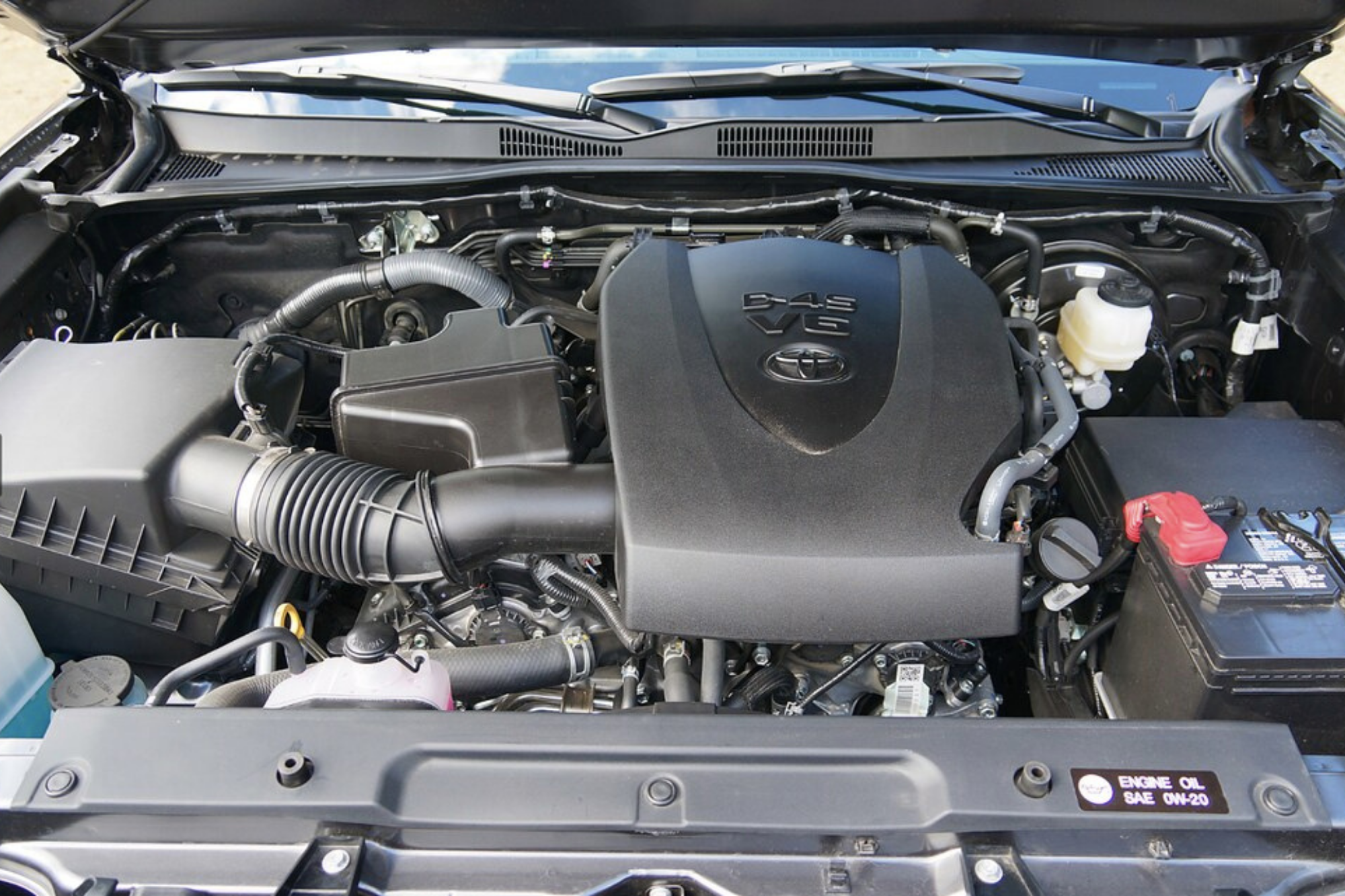 What Cars Use the 2GR FKS?

FKS 3.5 V6 engines are in the following Lexus and Toyota models:

Lexus models with the 2GR-FKS engine use the 350 badging in honor of the 3.5L displacement. As shown above, the engine is found in many different Lexus 350 models. Other notable models include the Toyota Tacoma, Highlander, Camry, and Avalon.

Specs for the Toyota 2GR-FKS engine are as follows:

Again, the 2GR-FKS is a 3.5L V6 engine based on the design of the older 2GR-FSE. It uses an aluminum design to keep weight down. The DOHC design and relatively high 11.8:1 compression ratio help deliver good power and torque. As a naturally aspirated engine it doesn’t deliver the same performance as similar turbo or supercharged engines. However, 278-318 horsepower and 265-280 lb-ft are still very respectable figures.

To deliver efficiency the 2GR-FKS uses a combination of direct and port injection. As some may understand, direct injection is excellent technology for power, emissions, and fuel economy. However, the major drawback is potential carbon build-up issues. The Toyota 2GR engine avoids this by implementing port injection as well. 2GR-FKS engines can also switch to a simulated Atkinson cycle for better fuel economy and lower emissions.

There are too many models with the 2GR-FKS engine to list all metrics. Instead, we will focus on a few examples and expand with aftermarket potential. Anyways, the Toyota Camry with the 3.5 V6 delivers a 0-60mph time of just 5.1 seconds. That’s impressive for the Camry – a car many don’t associate with power or performance. Then there’s the Lexus IS 350 which delivers a 0-60 time of 5.6 seconds. Not bad but also nothing impressive by modern standards.

Figures continue getting slower for larger vehicles like the Tacoma, Highlander, etc. All of these cars, trucks, and SUV’s likely deliver plenty of power and performance for most. If performance is the end goal there are better engines around, though. Even Car & Driver came to the conclusion that the IS350 F Sport powered by the 2GR-FKS “deserves a better engine.”

Nonetheless, there is some decent aftermarket potential with the 2GR engines. A few basic mods like tuning, headers, intake, and exhaust can unlock another 20-30+ horsepower. There’s plenty more potential with more serious mods like turbocharging, cams, etc but that can get expensive. Once again we reach the conclusion that there are better engines out there if power and performance are the end goals.

We will cover these topics in greater depth throughout this article. It’s important we add a few notes before moving along, though. Again, these Toyota 2GR-FKS engine issues are not widespread. We’re considering these among some of the most common or most severe problems. None of them are common in the true sense of the definition.

The Toyota GR engine family dates back to 2002 and the 2GR-FKS was introduced in 2015. That gave Toyota a lot of time to iron out some problems with earlier GR engines. We wrote an article about 2GR-FE engine problems, and gave Toyota props for recognizing and solving problems with the engine. Anyways, let’s discuss the above Toyota 2GR-FKS problems and we will circle back to reliability at the end of the article.

As with most of these problems, the 2GR-FKS fuel pump problems aren’t a major concern. Remember, this engine uses both direct and port injection. DI runs at extremely high pressures and requires the use of a high-pressure fuel pump (HPFP). It’s this pump that has been a problem on a number of 2GR engines. Toyota did issue a TSB regarding the HPFP problems.

Ultimately, the TSB simply boiled down to a noisy, chirping fuel pump. It doesn’t appear the excess noise was actually causing any fuel pump failures or other issues. Once loud pumps were replaced it also doesn’t seem the issues were coming back at all. Those are good signs that this shouldn’t be a concern moving forward.

It’s still worth the discussion since the 2GR-FKS is a relatively new engine. A 6-7 year old engine is pretty new in the grand scheme. Whether or not the fuel pump chirping is a sign of future trouble is something to look out for. So far it seems unlikely that the HPFP is a long-term concern.

Again, the main topic is the HPFP chirping noises and the symptom there is simply the noise. Fuel pumps can and do fail from time to time, but it’s not common on the 2GR engine. Anyways, look for the following symptoms:

If the HPFP is actually failing you will usually notice a number of symptoms. Long cranking and hesitation during acceleration are two common symptoms of Toyota 2GR-FKS HPFP failure. You may also notice the check engine light along with fault codes and a rough idle.

The TSB from Toyota regarding chirping noises is not a recall or extended warranty. However, given they’re aware of the problems they may still help with repair bills outside of warranty. It’s likely worth checking at the least. Otherwise, HPFP replacement can be a fairly expensive job.

Out of the problems on this list Toyota 2GR-FKS oil leaks are likely the most common. They’re still not truly common and many 3.5L V6 engines will go well beyond 100,000 miles before any oil leaks. That does lead us to an important point regarding oil leaks in general. Oil leaks are common on MANY engines when they reach 100,000+ miles and 8-10+ years old.

Oil leaks often begin with a gasket, O-ring, seal, etc. These rubber or rubber-like parts simply degrade with age and heat cycles and eventually begin cracking. Most oil leaks on the Toyota 2GR-FKS engine will likely boil down to natural wear and tear. However, there are a few notable leaks to discuss.

The first we’ll go through relatively quickly. One potential oil leak is the cam sensor bolt hole. As with the HPFP chirping Toyota issued a TSB addressing the cam sensor bolt oil leak. A TSB is not the same as a recall or extended warranty, so you may still have to pay for this repair out of pocket.

Symptoms of oil leaks are pretty simple. Nonetheless, look for the following signs that the 2GR-FKS is leaking oil:

A visible leak is a dead give-away. If you’re seeing spots of oil on the ground after parking for a while then you may have an oil leak somewhere. Otherwise, you may notice oil leaks or stains within the engine bay. Burning oil smells and/or light smoke are possible if the oil is dripping onto hot components and burning off.

Above we discussed the cam sensor bolt hole and timing chain cover as two notable areas where 2GR-FKS oil leaks occur. Some other common oil leaks may include the valve cover gaskets, oil pan gasket, and main seals. These leaks don’t seem as common yet, but are prone to developing north of 150,000 miles.

The above video shows a Toyota Tacoma with a timing chain cover oil leak. There’s also some good details on why this is such a major and concerning oil leak. Accessing the timing cover to fix the oil leak can be 8-10+ hours of labor. Depending on your location this can easily end up being $800+ in labor costs.

Fortunately, parts to fix oil leaks are often cheap gaskets and seals that cost about $10-30. Repair bills can add up due to labor for intensive jobs like the timing chain cover, though.

In honor of time we will speed through this section pretty quickly. For one, this affects such a small number of Toyota 2GR-FKS issues that it may not be worth mentioning. Also, complete engine failure is a major issue. Those who run into issues like this are likely to vent frustrations via multiple outlets. This can easily blow uncommon 2GR-FKS problems out of proportion.

Anyways, engine failures appear most common on the Toyota Tacoma. They also seem to stem from the connecting rods and bearings on cylinders 5 and 6. One primary conclusion is that the 2GR-FKS doesn’t have great oiling on steep slopes (think off-roading and not necessarily standard paved mountain roads).

That can also lead to concerns for those wanting to use the performance of the 2GR-FKS engine. Hard braking and acceleration around long, high-speed corners can also cause oiling issues. Point is – it raises concerns about tracking the 2GR-FKS or driving in other extreme conditions. It’s likely a moot point for most, but something to keep in mind. Complete engine failure will, of course, require a new engine. That can lead to repair bills in the $5,000 to $10,000+ ballpark depending on how the engine is sourced. Not good.

Is the Toyota 2GR-FKS reliable? Yes, we believe this engine earns above average remarks for reliability. Toyota has a great reputation for reliability and longevity. Even though the 2GR-FKS is more complex than many previous Toyota engines it still delivers great reliability. We’re talking about the GR engine family which dates back to 2002. By the release of the 2GR-FKS many previous problems were addressed with updated parts.

Oil leaks from the timing chain cover may be concerning due to the cost of repairs. However, it’s still a limited number and not a truly common problem. Pretty much the same can be said for the HPFP and engine failure problems. We don’t think any of these issues are even remotely close to being common that they should warrant concern.

Maintenance is one of the keys to reliability for the 2GR-FKS – as with any other ICE. Use quality oils, change fluids on time, and fix problems if/when they occur. Do this and the 2GR-FKS will deliver exceptional reliability for most. Despite them being fairly new there are already a number of engines beyond 250,000 miles with few or no issues.

Ultimately, the 2GR-FKS engine delivers a great balance of performance, efficiency, and reliability. Stay on top of maintenance and chances are you’ll have a long, reliable experience with the 3.5L V6.

What’s your experience with the Toyota 2GR-FKS engine? Are you considering one?