If you ask a non-enthusiast their opinion on Toyota, most will say that they are reliable and practical. Performance-oriented and powerful are adjectives that probably wouldn’t make the list at all. That is likely because they’ve never heard of either the 1JZ or 2JZ.

In enthusiast circles, both of these engines are immediately recognized and wholeheartedly respected. They are also feared at dragstrips and racetracks around the world. That is because the stock power potential of both the 1JZ-GTE and 2JZ-GTE is unlike nearly everything else.

Over the last 30 years, both the 1JZ-GTE and 2JZ-GTE have become holy grail engines for anyone looking to make huge power, reliably, with relatively little work. As both are extremely similar in design, the question naturally arises, which is the better engine? In this article, we will compare them directly and explain why the development of the Toyota JZ series is one of the most impressive powertrain achievements of all time. In the 90s, Japan was leading the worldwide initiative to produce affordable sports cars for the masses. With Nissan producing cars like the R32 Skyline and Mazda with the FD RX-7, Toyota also wanted a piece of the pie. The result was a lineup of inline-6-powered performance vehicles that have become iconic for many reasons.

Most of the performance geared 90s Toyotas were powered by an updated iteration of their tried and tested inline-6 formula. This specially developed line of engines was given the JZ designation. The 7M-GTE was the predecessor to the JZ series and a notoriously difficult engine. Toyota learned from the shortcomings of the 7M-GTE and improved their inline-6 recipe with the JZ series.

The resulting 1JZ and 2JZ engines are some of the strongest and most over-engineered engines in history. Due to the high-quality materials and balanced design, both engines are able to withstand over twice the factory amount of power with stock internals. As they were designed in close proximity to one another, the 1JZ and 2JZ share far more similarities than differences.

Toyota 1JZ -GTE: The Start of the JZ Family

Toyota’s initial 7M-GTE replacement, the 1JZ-GTE, was produced from 1990 to 2007. A few key changes differentiated the two motors, with the 1JZ-GTE winning in the reliability and power potential departments. Unlike the 7M-GTE’s long-stroke design, the 1JZ was designed to be an over-square engine. More technically, the 1JZ has an 88mm bore and 71.5mm stroke with a displacement of 2.5 liters.

The functioning hypothesis of Toyota’s square design was that an inline-6 with a similar bore and stroke is nearly perfectly balanced, producing ample amounts of power without putting much strain on the internal components. It turns out they were right. With stock power, the 1JZ can easily rev to its optimal powerband without coming close to the engine’s internal limits.

Internal weaknesses in the 7M-GTE were a common source of trouble. With the 1JZ, Toyota wanted to make sure that these reliability issues didn’t remain a problem. For ultimate strength, the block was made from cast iron and the head from lightweight aluminum. The pistons were also made with a unique method of aluminum casting. The camshaft was constructed from high-strength steel, preventing wear and damage. In conjunction with the over-square design, these quality improvements dramatically increased the 1JZ’s overall strength.

While the 1JZ ushered in a new era of Toyota inline-6s, it was the later developed 2JZ-GTE that became legendary. The 1991 release of the Toyota Aristo V saw the first application of Toyota’s 2JZ-GTE engine. However, it wasn’t until 1993 with the 2JZ’s placement in the MKIV Supra that the engine became a cult classic.

In terms of actual differences between the 1JZ vs 2JZ, displacement is the main distinguisher. For the 2JZ-GTE, Toyota bumped up displacement by half a liter for a total displacement of 3 liters. The stroke was also lengthened to 86mm, with the bore staying the same 86mm that it was on the 1JZ-GTE. As a result, the 2JZ-GTE is a perfectly square motor and therefore has slightly different power delivery characteristics than the 1JZ-GTE.

Other than the difference in displacement, a new turbo format was the other main change. Previously on the 1JZ-GTE, Toyota opted for a set of twin-parallel CT12A turbochargers. Each turbo was responsible for delivering boost to a bank of 3 cylinders, spooling simultaneously. For the 2JZ-GTE, Toyota chose to use a twin sequential turbo setup. With that setup, one smaller turbo delivered low-rpm boost which fed into a larger, slower spooling turbo for higher revs.

While the 1JZ vs 2JZ are nearly identical in most significant ways, their subtle differences affect their overall characteristics. The biggest performance-affecting differences are caused by the 2JZs longer stroke and displacement.

In terms of overall power capabilities, the 1JZ and 2JZ are on a nearly even playing field when it comes to strength. As both the 1JZ and 2JZ have cast iron blocks and aluminum heads, they can both handle immense power. Similarly, the built steel camshafts and cast aluminum pistons found in both engines can also handle tremendous strain.

With that being said, there are many instances of 1JZs and 2JZs running much higher power figures than the above. The stated figures represent the amount of power that can be made reliably by each engine.

For almost any application, both engines can be stretched to an adequate level with little internal work. Of all of the standout characteristics of the JZ line, durability is the factor that makes them so beloved.

As the 1JZ-GTE is a more widely produced engine than the 2JZ-GTE it is also much less expensive. At a lower price point, the 1JZ-GTE is the perfect engine for an amateur drifter that might not have the cash to throw at a 2JZ-GTE. For a drift build, the added expense of a 2JZ is unnecessary as the 1JZ is just as capable for this purpose.

The 2JZ-GTE was only available in the MkIV Supra and the Aristo V, making it a rare engine. As MkIV Supras have shot up in value in the past decades, 2JZ-GTE prices have followed suit. It isn’t uncommon for 2JZ-GTEs to sell for 5 digits in good form, making them unobtainable for most enthusiasts. Because the 2JZ has become so legendary, most of that inflated price boils down to bragging rights. Unless a 2JZ is specifically what you’re after, it isn’t entirely practical to pay 3-4 times more for one over a 1JZ-GTE. This is obviously dependent on your intended use for the motor, as the 1JZ and 2JZ have unique characteristics. 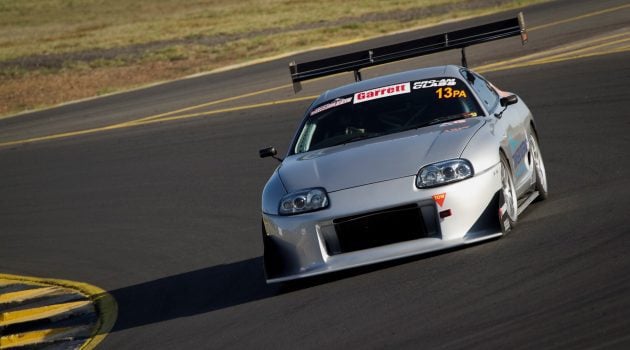 Just because the 1JZ vs 2JZ are nearly identical engines doesn’t mean that they act the same. In fact, the displacement difference and longer stroke of the 2JZ significantly impact its characteristics. The differences in power and torque delivery make each engine better for different applications.

With a slightly shorter stroke than the 2JZ, the 1JZ-GTE produces more power at a higher RPM. The 1JZ-GTE produces its peak 280 horsepower at 6,200 RPM, very close to its 7,500 redline. While most of the power is delivered at high revs, most of the 1JZ-GTEs torque is generated slightly lower. Peak torque is 268 pound-feet, generated at 4,800 rpm. The high-rev power output of the 1JZ-GTE is the optimal situation for drifting. The mid-range torque is ideal for initiating a drift by breaking rear traction and sustained high-end power is needed to keep the slide going. For this reason, combined with the 1JZs strength, it is a common engine of choice for drift builds.

Unlike the 1JZ-GTE, the 2JZ-GTE strikes a more even balance between low-end torque and steady power delivery. The longer 86mm stroke and higher displacement are the primary cause. The slightly altered internals mean that the 2JZ-GTE produces a peak 280 horsepower at a lower 5,600 rpm, while a peak 320 pound-feet of torque is generated at just 4,000 rpm.

The 2JZ’s slower revs and low-end torque make it a better engine for drag racing or time attack applications. Low-end torque and huge power are necessities for a solid launch at the drag strip, and a linear powerband is needed for an effective time attack car. The 2JZ-GTE shines in both of these scenarios.

Regardless of which you prefer, it is impossible to argue that either the 1JZ-GTE or 2JZ-GTE is a bad engine. Toyota set a new benchmark for strong, reliable inline-6 engines with the JZ series, a benchmark that stands strong today. Immense over-engineering, thoughtful design, and placement in iconic 90s cars have made the JZ series kings of their domain.

It is hard to claim that one engine is superior to the other, as both are great for different uses. For a high-revving drift build, a 1JZ-GTE will provide above and beyond performance. If a drag or track build is more your speed, a 2JZ-GTE will serve you right. Either way, it would be hard to be disappointed in a JZ.

If you enjoyed this article and are interested in other engine comparison articles, check out our Nissan VQ35HR vs VQ37VHR article or our Honda VTEC vs. i-VTEC article. Safe driving!