Let’s take a look at the history and the 5 Best Hyundai 2.0T engine upgrades up to date. The specific Hyundai 2.0 Theta engine was initially introduced into the automotive market in 2004 placed in the Hyundai Sonata, followed by a resurgence in 2009 with the 2.0T engine used in the Genesis Coupe. Yet, Hyundai has continued to renovate and change this engine’s capability throughout the past decade, aiming to increase reliability and performance. However, there are a number of opportunities for improvement for the Hyundai 2.0T engine.

The main two variants that will be focused upon within this article will be the Theta II MPI & GDI in Genesis 2.0 Turbo, however many of these listed upgrades and insights can be applied to the many variations of the Hyundai 2.0T engine.

Hyundai and Kia have exhibited a variety of types of the 2.0T ranging from power with 163 hp to 255 hp in certain turbo variants. As a result, some may perceive these engines as mediocre in stature, yet these five engine upgrades within this article may offer the boost every 2.0T driver is looking for. 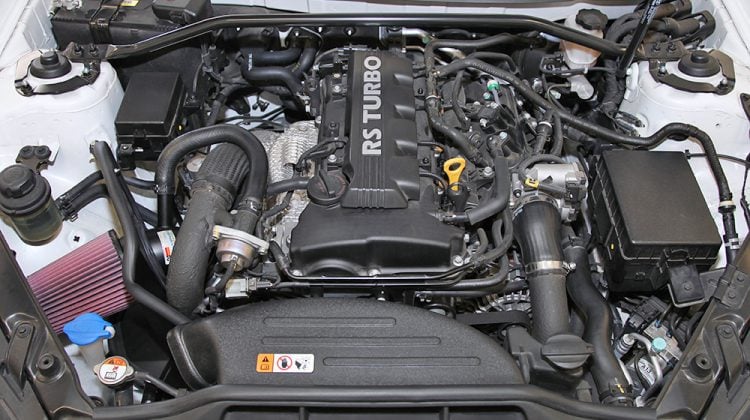 For those who know their exact engine variant of the Hyundai 2.0 Theta engine, please feel free to scroll down and utilize the needed information about engine upgrades. There are thirteen overall variants of this engine that have been in production since 2004 within varying models. However, this article will quickly overlook only the five main categories of the Hyundai 2.0T engine variants.

Let’s check these engines out, see what models they are within, and check out some of the specifications offered by each variant. Then we’ll jump into the best upgrades for the Hyundai 2.0T engine and its different needs.

This Hyundai 2.0L Theta produces 142 hp and 138 lb-ft of torque at 4000-4250 revs per minute, weighing approximately 295 pounds. This engine is one of the primary focuses within this article as the 2-liter variation will be the focus of listed upgrades. This initial Hyundai 2.0 engine uses a timing chain, unlike modern timing belts.

This version of the theta engine (the 2.0L MPI) holds high importance in terms of usage and variety of different models the engine is applied to, therefore there are a considerable variety of upgrades for the Theta II engine. This engine also was necessary for the progression towards the production turbo model which is most widely used to this day by both Kia and Hyundai. The first production Theta II produces 163 hp with 145 lb-ft of torque at 4500-4600 rpm.

Kia and Hyundai continued to utilize the foundation of the Theta II Turbo engine in a plethora of different models offered to the market.

The Hyundai (and Kia) Theta II Turbo engine is utilized in 7 present-day production vehicles and seven discontinued vehicles manufactured within the past decade. Presently the Theta II Turbo’s newest production form can be found in the present models as well as others:

Regardless of the variation in 2.0T engines, all share the same inline four-cylinder 2.0L turbo DOHC design. Each Theta II engine shares the same 86mm bore and stroke, with varying compression ratios depending on each different machine. Hyundai and consumers alike recognized the economical cost of these engines in combination with their fuel efficiency, making the Theta II Turbo very market-friendly.

The multi-port injection or “MPI” engines are specific to Genesis Coupe models ranging from 2009 to 2014. The 2014 Genesis Coupe offers a good power output with 275 hp and 275 torque running 93 octane.

The direct fuel injection or GDI engines use direct injection technology to help increase the overall capability of the Theta II engine and its capabilities. This might be showcased in earlier Hyundai engines exhibiting more power before the company transitioned to smaller turbo 2.0T GDI engines in specific models. Conclusively, the 2.0 GDI G4KL is the most recent or final production engine variant currently found in the Genesis G70 and the Kia Stinger. The G4KL produces 252 hp stock and 260 lb-ft of torque.

With that basic summarization of the Hyundai 2.0 engines and their production variants and a look at its history of recalls and differentiating pros and cons, let’s now move on to the top 5 upgrades that would most benefit a Hyundai 2.0T engine. Alongside these considered upgrades offered in this article, it may be essential to consider “supportive” modifications if need be. The four main focuses that benefit and upgrade a Hyundai 2.0T engine are tuning, intake, shift kits, and exhaust modifications.

However, certain Genesis Coupe drivers have showcased on social media and YouTube specifically how to gain some substantial power with some economical bolt-on modifications and a simple tune. For example, here is a combination that some might find popular amongst immediate easier modifications for the newer Genesis Coupe drivers (before we dive into the general suggestions):

These are three recommendations that were randomly offered from various Genesis enthusiasts online that seem to fit their needs and wants for engine upgrades, especially with bolt-on and minor projects or additions. Yet, first, let’s break down the five specific areas of improvement the Hyundai 2.0T engine can immediately and economically upgrade.

GenRacer currently offers a universal blowoff valve on sale for a decent price manufactured by HKS for about $250 currently. Now, let’s get into the 5 best Hyundai 2.0T engine upgrades.

These listed options below are the best considerable upgrades for the Hyundai 2.0 Turbo engine in no considerable order; yet intake and tuning are generally considered the most important introductory modifications to the Hyundai 2.0T engine upgrade options.

An upgraded intake system is one of the most highly recommended first steps towards upgrading your Hyundai 2.0T engine. One consumer referenced how the AEM intake and Magnaflow exhaust worked together perfectly for his/her goal to gain more productivity in the Hyundai 2.0T engine.

Obviously, the easiest to add quick hp to your engines without breaking the bank would be bolt-on intake sytems and combos. Luckily, there are plenty of similar products to find out throughout our website. For more information about intakes and varying intake, upgrades check out our other articles on Intake upgrades and modifications.

AEM mainly offers intake upgrades for the later Sonata models and Genesis Coupes. Price and labor can range from off-brand intake kits starting at $140 upwards to $430-500 for a specific intake kit. However, with price comes the increase in horsepower – which is what every driver is seeking when looking for the 5 best Hyundai 2.0T engine upgrades.

Certain internet folklore has created a buzz around the dynamic changes that a tune can produce on the Genesis Coupe as well as other 2.0T engine drivers seeking a higher standard of performance. Tuning may be the only and primary mod for your 2.0T engine, or it may be extremely necessary to maximize the output of other modifications with a supportive tune.

Tuning. has a wide variety of potential benefits for any engine. A quick way to read and clear certain codes that could potentially be minor fixes to maximize engine performance and capability can be found with a quick tune. Tuning should definitely be considered as a primary option or necessary supportive measure for those with other modifications as well.

A downpipe modification may offer better aggressive sounds as well as more of that turbo feeling when driving. A potential modification can increase torque performance, combined with the fact that it may benefit the longevity of the turbo spool and engine overall by relieving backpressure.

Maximizing the internal cooling of an active turbo engine allows the engine to run at its full potential. Rather than being frugal on cost for an intercooler, we recommend whatever is the highest quality due to how crucial the modification is for engine sustainability and performance.

Summit Racing offers a variety of applicable intercoolers including the Mishimoto Z-Line Intercooler currently on sale for $180. Pricing can carry from $120 to $500 for an FMIC modification or modification kit, with widely varying results of horsepower improvement usually capping around 5-10% of overall power gains from the engine (rather than specific horsepower).

Shift kits (or “short shifters”) are modifications that replace the stock gear shifter in manual transmission cars. This type of modificiation offers drivers the ability to reduce their shifting time and increase their overall shifting times to become more efficient. Some drivers may find that the addition of a shift kid mod will shorten the throw time from gear to gear during their driving experience.

GenRacer currently has a sale on a short shift kit for 2011-2016 Hyundai Genesis Coupes for $160. Although short shifters may be for the specific racer and car modifier demographic, it has been proven amongst the car community to increase transmission response and general engine reaction.

The Hyundai 2.0T engine is efficient and affordable throughout its many different variations and applications throughout the car industry. The engine has a history of recall issues, however, maintains a steady market presence and offers plenty of modification and upgrade opportunities for drivers. This 4 cylinder engine can really respond to the right upgrades and proper installation of each modification.

Tuning and intake modifications should usually be considered first when dealing with the Hyundai 2.0T driver seeking out immediate upgrades. These options are generally the most cost-effective and economical for the engine as well. If you’re still seeking more power and drive control then pursuing downpipe modifications as well as a new front-mounted intercooler should likely be your next step.

Regardless of the extreme amount of past recalls of the Hyundai 2.0T engine variants, and its associated issues ranging from the crankshaft to various oil-flow issues, the engine continues to maintain itself on the market and amongst consumers. Most importantly the Hyundai 2.0T engine can really be fun and beneficial for a small amount of money with our five listed upgrades and other supportive mods

What’s your experience with Hyundai 2.0T upgrades? Are you considering any?