The Toyota 2GR-FE is a 3.5L V6 engine found in many Toyota, Lexus, and Lotus models from 2005 to present. NA versions make roughly 290 to 315 horsepower depending on the specific car. A handful of the 3.5 V6’s also use a supercharger and make up to 430 horsepower. Point is – the Toyota 2GR-FE offers respectable performance. There’s also good reason the engine has been around so long.

However, as with every engine, the Toyota 3.5L V6 is prone to a few common problems. In this article, we will discuss common failures on the 2GR-FE engine along with overall reliability. 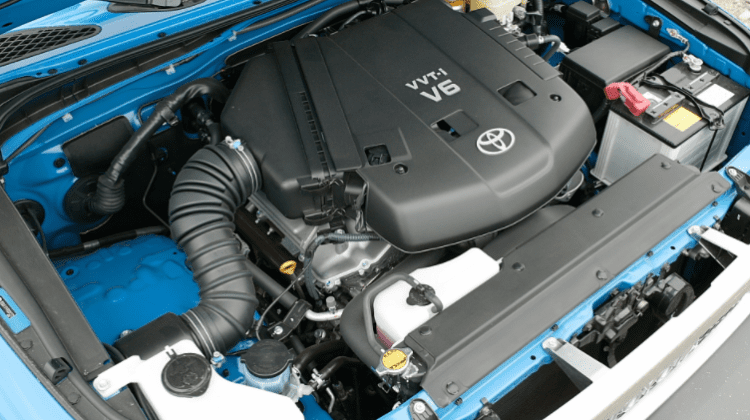 A few common issues on the Toyota 3.5L V6 engine include:

This applies to a lot of the common problems we write about, but it’s a good time to add a few important notes. Simply because we’re classifying these failures as common does not mean they’re actually very common. The above Toyota 3.5 engine faults are simply a few of the most common. Overall, it’s a reliable engine. However, there are other possible issues the 3.5L V6 may run into. This is especially true as any engine ages and wear and tear components reach the end of their intended lifespan.

Throughout this article we’ll discuss each of the above issues with the Toyota 2GR-FE. At the end we’ll throw in some extra thoughts regarding the reliability of the 3.5L engine.

Before diving in let’s lay out the many Toyota, Lexus, and Lotus models that use the 2GR-FE engine. The below isn’t even a fully exhaustive list. Nonetheless, the 3.5L V6 Toyota engine is in the following cars:

Engine oil leaks may come from several different areas. However, the most common oil leak on the 2GR-FE primarily affects models up to 2010. The variable valve timing (VVTi) system uses a rubber hose that feeds oil to it. Toyota used an iron to rubber design which has a tendency to cause the rubber to wear down over time. Ultimately, this leads to an oil leak from the VVTi system.

Toyota addressed the issue on the 3.5L V6 by switching to an all metal pipe in 2010. This part is a direct fit on any year of the 2GR-FE engine. As such, it’s a good idea to ensure the rubber hose is replaced with the metal design if you run into this oil leak.

We recommend replacing this hose as preventative maintenance. If the hose develops a serious leak then it’s possible to lose oil and oil pressure quickly. This can result in complete engine failure if the engine isn’t shut down in a timely manner. Obviously, a lack of oil pressure isn’t good for an engine. Not to scare anyone, but don’t let this cheap hose cause expensive problems.

A few symptoms of a leak from the VVTi rubber hose include:

Most of these symptoms are pretty standard with any oil leaks. A minor leak from the 2GR-FE may leave drops of oil on the ground or produce a small amount of smoke. Bigger leaks from the VVT hose can pop up out of nowhere and lead to rapid oil loss. This may cause the 3.5L engine to lose oil pressure and produce a lot of smoke.

You can find the metal oil hose online for about $20-40. It’s not a challenging DIY so it’s a pretty inexpensive job overall. Labor will likely take a few hours so expect to pay another $150-300 at a repair shop. Either way, it’s a good idea to replace the 3.5L V6 VVT oil hose sooner than later if you have the original rubber part on the car.

Idler pulley’s are yet another problem that primarily affects earlier model 2GR-FE engines. Toyota eventually resolved this issue with a heavy-duty idler pulley around 2009. The problems seem to primarily affect 2005-2008 Toyota RAV4, Camry, Highlander, and Sienna models. However, any of the early Toyota 3.5L engines may run into idler pulley problems.

It’s not a serious problem in most cases and typically just produces some loud, ugly sounds from the engine. Listen for any squealing or rattling from the 3.5 V6 and chances are it’s an issue with the idler pulley. Certain models use 2 idler pulley’s and it’s a good idea to replace both while you’re in there. You may also consider replacing the belt, especially at 100,000+ miles.

Look for the following symptoms that may indicate an issue with the Toyota 2GR-FE idler pulley(s):

These are really the only symptoms of 3.5L idler pulley issues. Over time they get a bit noisy and it’s not usually an urgent repair. However, it’s still a good idea to knock out the repair sooner than later.

The heavy-duty idler pulley may be found here. They’re about $40-50 each, and Avalon, Camry, and Sienna models use two of the pulleys. The RAV4 and Highlander models use electric power steering so they only have one idler pulley.

As with the first issue we discussed, replacing the idler pulleys isn’t too challenging for an average DIY’er. Expect to spend a couple hours fixing everything up, or labor at a shop will likely fall in the $150-300 ballpark.

Water pumps are essential to proper operation of the 3.5L V6 engine. If the pump fails it’s an urgent repair that should be taken care of immediately. Sometimes the water pump may simply leak coolant. However, if the pump has problems internally then the 2GR-FE engine will start to overheat pretty quickly without proper coolant flow.

A few symptoms of water pump issues on the 3.5 V6 engine include:

A visible coolant leak may indicate a problem with the water pump. If it fails the 3.5L V6 will lose coolant flow and begin to overheat pretty quickly. In this case, it’s important to shut the engine down quickly and not drive it until it’s fixed. Coolant pump failures can also cause steam from the engine bay as the coolant drips onto hot parts.

This is the most expensive repair on the list, but it’s still not too bad in the grand scheme. A 2GR-FE water pump comes in around $80-150 depending on the specific model. Labor will also probably come in around 3-5 hours so expect to tack on another $250-400 for replacement. It’s not a challenging repair but it may take a day in the garage and a little patience.

Spark plugs and ignition coils partially make the list since we’re out of other problems for the 3.5L V6 Toyota engine. These are really standard maintenance items, however some engines do experience premature ignition coil failure. Anyways, it’s mostly here to finish off the list.

The following symptoms may indicate a problem with the 2GR-FE ignition system:

Over time, spark plugs and ignition coils become less effective and may cause the engine to start misfiring. This can result in the Toyota 3.5L engine stuttering on acceleration or developing a rough idle. Power loss also occurs, however it’s likely tough to notice as it happens over time.

If you’re over 100,000 miles it’s a good idea to replace all 6 spark plugs even if only one of them is problematic. This is probably less necessary with ignition coils, but it still might not be a bad idea to replace all of them. A set of 6 spark plugs should be less than $50 while ignition coil sets can be about $150-250. These are simple repairs that even novice DIY’ers can knock out in the driveway.

The 3.5L V6 engine from Toyota earns above average remarks for reliability. These engines come with their fair share of common problems, however they’re pretty cheap, simple fixes in the grand scheme. We’ve also come across plenty of engines that have way more problems in general. The Toyota 2GR-FE doesn’t have many issues and they’re typically cheap to fix when they pop up. As such, it’s definitely a reliable engine.

Of course, part of it comes down to maintenance. Change the 3.5L V6’s oil on time and fix failures in a timely manner. Knocking out some preventative repairs on the earlier model engines also can’t hurt. Maintain your 2GR-FE well.

Chances are this engine will provide a mostly trouble free, reliable experience up to 200,000 miles. Some Toyota 3.5L V6 engines even make it well past that mark, so it definitely has solid longevity.

The 3.5L V6 Toyota engine is a stout engine all-around. It offers respectable performance on base models, and plenty more power on the supercharged variants. However, no engine is perfect and that holds true with the 2GR-FE. Early models are prone to a few extra problems that Toyota resolved down the road with stronger parts. Look out for issues with the VVT oil hose, idler pulley(s), and water pump. Ensure you’re getting the newest variants of each part as they’re typically less prone to failures.

Maintain your 3.5L 2GR-FE well and it will likely reward you with a reliable experience overall. There’s definitely a reason Toyota uses this engine in so many flagship models for such a long period. It’s a good engine with solid performance and reliability.

What’s your experience with the 3.5L V6? Are you considering one?