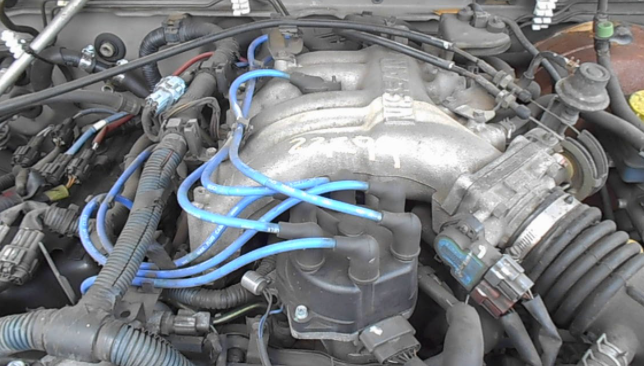 Nissan 3.3L V6 VG33E engines are in the following models:

There is also a supercharged variant of the 3.3L engine known as the VG33ER. It shares the same design as the standard VG33E engine with the addition of an OE supercharger. It’s only in the two following Nissan models:

These are fairly standard specs for an engine built in the mid 90’s. It uses a heavy but strong cast iron block, and a lighter aluminum cylinder head. The Nissan 3.3 is also a simple design with its SOHC design. Power and torque are OK for the era. However, many will likely find its performance underwhelming compared to newer engines.

Those looking for more power may consider the VG33ER with a supercharger. It’s a modest setup, but produces a more appealing 210 horsepower and 246 lb-ft of torque. Anyways, what the Nissan 3.3L VG33E lacks in power it makes up for with solid reliability and longevity. That said, let’s jump in and discuss a few common problems with the Nissan 3.3 engine.

A few of the most common problems with the Nissan 3.3 VG33E engine include:

We will break down each of the above issues in-depth in the rest of this article. Though, it’s important we add a few quick notes before moving along. We’re considering these among the most common VG33E engine problems. That’s not to say the problems are truly common. Rather, when issues occur these are a few of the common areas.

That said, the Nissan 3.3 offers solid overall reliability. Age and mileage are big considerations, though. Most of the VG33E engines on the road are nearing or beyond two decades old. That kind of wear and tear can have negative impacts on reliability. Anyways, we’ll circle back to the reliability topic at the end of this article. For now let’s jump in and discuss the above common problems with the Nissan 3.3 V6.

We find ourselves discussing timing belts on older engines quite often. As with most others, there isn’t really a design flaw with the VG33E that causes common premature failures. Timing belts are standard maintenance that should be done every ~100,000 miles on the VG engine.

However, the Nissan 3.3 V6 is an interference engine. This means there is some overlap in the area where the valves and pistons travel. Should a belt snap or slip too far it may allow the pistons and valves to contact each other. In this case chances are the VG33E will bend a couple valves and potentially damage the pistons.

It’s not very common to see early timing belt failures, and most occur at 110k+ miles on the belt. If you stay on top of belt repairs it’s unlikely you’ll run into this issue. Regardless, timing belt issues are worth the mention due to the risk of severe engine damage.

A few symptoms of timing belt problems on the Nissan 3.3 VG33E engine include:

The first two symptoms – odd engine sounds and a loose belt – are typically the only signs before the belt fails. As it wears and develops slack you may notice odd sounds similar to ticking or slapping. Visual inspections may indicate wear and tear or point to a loose belt. It’s not always evident before the Nissan VG33E timing belt fails, though.

Once the belt fails you’ll notice a ton of symptoms depending on the degree of failure. The Nissan 3.3 V6 belt may simply slip a couple teeth and you’ll notice power loss and poor overall engine operation. If the belt snaps or jumps more than a couple teeth the engine likely will not run at all until the belt is replaced.

Fortunately, timing belts are designed to be a fairly straight-forward repair. It still takes some time and knowledge, so unless you’re a confident DIY’er you may want to leave it to the pros. VG33E timing belts are usually offered as kits. These will often include the belt, water pump, thermostat, seals, and gaskets. They’re good parts to replace while you’re doing the belt.

Anyways, a Nissan VG33E timing belt kit runs in the ballpark of $150-250. It’s a few hours of labor so expect another couple hundred dollars if you’re going to a repair shop.

Alright – we’ll be quick on this section. It’s a little repetitive with the above timing belt discussion. Water pumps don’t often fail on the Nissan 3.3 V6 engine. However, that’s because they’re often changed alongside the timing belt around 100,000 miles. If you skip the water pump then problems become a lot more common.

Most of the labor is overlap with the timing belt. Once you’re in there the water pump is a quick repair, and it’s also a cheap part. Again, timing belt kits usually include the water pump and t-stat and the all in price in less than $300.

Fuel sending unit (FSU) issues might be the only actual design flaw with the 3.3 V6 we’re discussing in this article. The fuel sending unit attaches to the fuel pump and sends fuel readings to the gas gauge. Nissan issued an extended warranty for this part a long time ago, which indicates they were aware it’s a common issue.

In the grand scheme VG33E fuel sending unit problems are a pretty minor issue. It’s a cheap part and easy fix, but it can cause annoying issues. An incorrect gas gauge usually points to a problem with the FSU. In some cases it may be an issue with the fuel pump itself, but the sending unit is typically the best starting point.

Symptoms of fuel sending unit problems on the Nissan 3.3 engine include:

The symptoms are pretty simple here. Fuel sending units simply send the fuel level reading for the gas gauge to display. When the unit goes bad you may notice incorrect fuel gauge readings. In some cases the VG33E gas gauge may bounce around a little bit.

A FSU for the 3.3L V6 usually runs in the $40-50 ballpark. It’s easiest to replace with a low tank of gas. Most can likely knock this out in the driveway in less than an hour. If you’re going to a repair shop tack on an extra $50-100 for labor.

Oil leaks on the VG33E V6 engine are more an age related issue rather than a design flaw. All engines use a number of gaskets and seals that take a lot of abuse over the years. These rubber-like gaskets wear down, develop cracks, and begin leaking oil with time. Our main focus with Nissan 3.3 oil leaks is problems with the valve cover gaskets.

These gaskets seal the gap between the head and valve cover. They’re subject to lots of heat and those heat cycles take a toll on the valve cover gaskets. It’s one of the most common oil leaks on the VG33E as these engines continue aging.

Other areas for oil leaks include the front main seal, rear main seal, and oil pan gasket. These problems are also increasingly more common as the Nissan 3.3 engines age.

The symptoms of oil leaks on the Nissan VG33E are as follows:

Of course, symptoms for oil leaks are pretty straight-forward. They’re not always very noticeable on the 3.3L V6, though. Visible oil spots on the ground is a dead give-away that oil is leaking from somewhere. With the valve cover gaskets, however, visible leaks on the ground don’t always occur.

Since the VCG sits up high oil often drips onto hot components and burns off. This may cause a burning oil smell and/or light smoke from the engine bay. If you’re noticing these symptoms it’s usually the VG33E valve cover gasket(s).

Valve cover gaskets are extremely cheap parts since they’re simple gaskets. They’re generally about $10-20 for each gasket (the V6 engine uses two). The passenger side gasket is often easier to access and replace. Driver side gaskets require moving a few extra parts out of the way.

It’s usually a good idea to replace both gaskets, especially with higher age and mileage. Labor for both can end up somewhere around 3-5 hours, so labor costs can add up a bit.

Is the Nissan 3.3L VG33E engine reliable? Yes, we believe this engine offers solid reliability. There aren’t really any major design flaws or problems with the Nissan 3.3 V6. However, age is a huge factor when looking to purchase one of these Nissan engines today.

All engines use wear and tear items that don’t always last as many miles as the engine internals. Age can be just as hard on an engine as mileage is when it comes to things like gaskets and seals. Point is – the Nissan VG33E was typically a very reliable engine when it was a bit newer. They can still be reliable, but older cars require a bit more attention.

Nonetheless, maintenance is a big key to ensuring the VG33E 3.3 engine remains reliable. Look for a car and engine that have been well maintained. Quality oils, changing fluids on time, and repairing problems in a timely manner go a long way. Plenty of Nissan VG33E engines last beyond 200,000 miles without many significant issues along the way.

VG33E engines were first released in 1996 and remained through 2006. With 170-180hp they’re certainly not going to deliver amazing performance. However, it’s plenty of power for most daily driving, on-road needs. Couple that with good reliability and longevity and the Nissan 3.3 V6 is still an appealing engine.

There really aren’t many truly common engine problems or flaws to discuss with the Nissan 3.3 VG33E. Fuel sending units are one design issue, but it’s a pretty small problem. Otherwise, most of the issues with the engine simply come down to age and mileage.

With proper maintenance it’s not uncommon for the VG33E to hold up well beyond 200,000 miles without major failures. If you’re in the market for one today just keep in mind the older engine might require some extra TLC.

What’s your experience with the VG33E engine? Are you considering one?