The Ford 5.4 Triton V8 is a long-running engine from 1997 to 2007. Power comes in at 235-550 horsepower and 330-510 torque. Output greatly depends on the year and model. Nonetheless, the performance numbers are impressive for the era the 5.4L engine was released. It’s a solid overall engine and won a handful of Ward’s 10 Best Engine awards. However, no engine is perfect and there aren’t any exceptions here. In this article, we will discuss reliability and common problems with the Ford 5.4L Triton V8 engine. 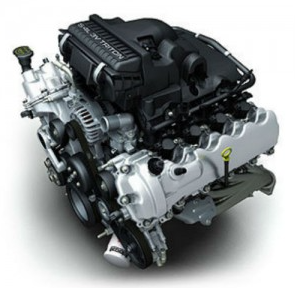 A few of the most common issues on the Ford 5.4 Triton include:

Throughout this article we discuss each of these faults and failures in greater depth. We’ll finish off the article with a few thoughts on how reliable the 5.4L Triton engine is. It’s important to add a few quick notes for now. Simply because we’re classifying these as common problems does not mean every engine will run into them. Also, a lot of these 5.4 V8 engines are more than a decade old. Newer 5.4L Triton engines will likely be more reliable – at least in the shorter term.

What Ford Models Use the 5.4 Triton?

This isn’t a totally exhaustive list as the Ford 5.4L Triton engine is also in a few other “specialty” cars. Nonetheless, the engine powered quite a few flagship cars and trucks from Ford. Models like the GT500 and Ford GT use a higher performance 4-valve variants of the 5.4 Triton. Most older 5.4L engines up to 2004 use a 2-valve variant while the bulk of engines from 2004 up use the 3-valve variant.

Some of the problems we list may be specific to certain versions of the 5.4L Triton. However, we’ll mostly limit this list to common failures across all engine variants. Otherwise, we’ll add some notes below as to which problems affect which Ford models.

The 2-valve Ford 5.4L engine sometimes has issues with spark plugs actually blowing out of the head. 3-valve engines don’t have this issue. However, the spark plugs are known to sometimes break when removed. This can create a bit of a hassle if the spark plugs break off, however it’s still a simple replacement overall.

Look out for the following symptoms that may indicate a problem with the spark plugs and/or ignition coils:

As spark plugs and ignition coils wear down they’ll often cause the engine to begin misfiring. You may be able to pick up on this by pulling the the fault codes. Misfires may also cause a slew of other drivability symptoms. Rough idle, stuttering, and power loss are a few things you may notice when your Ford 5.4 is misfiring.

These are pretty straight-forward repairs on the 5.4L V8. Spark plugs and ignition coils are easy to change in the driveway – even for less experienced DIY’ers. It might not be required but we always recommend changing all 8 spark plugs or ignition coils together. This is especially true if the current set is old. A set of Triton 5.4 coils usually comes in around $100-200 and spark plugs are about $50-100 for the set. In summary, they’re cheap repairs that most can do at home.

Fuel pump driver modules (FDM) are another common failure on the 5.4L Triton. Ford placed the driver module towards the rear of the steel frame. The aluminum module is then subjected to all the elements (water, salt, dirt, etc). Over time, build up enters the fuel pump driver module and causes it to fail. When it fails the fuel is typically cut off which can cause the engine to shut down.

Fortunately, Ford re-designed the part after they realized the problems. The new parts mount in the same location, but do not directly contact the 5.4 Triton’s steel frame. It’s also a pretty simple and cheap repair. As such, it’s not a bad idea to replace the 5.4 Triton fuel pump driver module as preventative maintenance. At the least you can take a peek at the FDM to check the condition externally.

A few symptoms of fuel pump driver module on the 5.4L Triton engine include:

Fault code P1233 will be a quick and easy way to trace problems to the FDM. Since it can cause fuel flow to cut in and out you may notice stuttering. Similar to what misfires can feel like, however the stuttering will likely be more dramatic with the driver module failure. Otherwise, your 5.4 Triton may not even start at all or completely stall out.

This is also an easy, quick, and cheap DIY on the 5.4L Triton V8. You can find the FDM for about $60-100. Since it bolts onto the frame towards the rear it’s easy to access and swap. The updated parts should have “standoffs” that keep the fuel driver module away from the steel frame.

It’s a cheap enough part that replacing it as preventative maintenance may be a good idea. It could help prevent you from becoming stranded. Alternatively, keep a spare FDM lying around.

Alright – there are a few things to discuss here. We’re simply referring to these problems as timing or timing chain related. The timing chain itself can be an issue on the 5.4L engine. However, timing chain tensioners and variable valve timing (VVT) are known trouble areas too. The 2-valve 5.4 Triton does not have VVT, so that’s isolated to the 3-valve Triton.

We’ll avoid getting too technical for now. Long story short – timing is a critical part of proper engine operation. If these issues aren’t resolved in a timely manner further damage can occur. Usually 5.4 Triton timing problems arise from a loose timing chain. The chain then slaps around a little bit, and given enough time that’s all it takes to break the timing tensioner. Some 5.4’s also run into issues with the VVT and that’s primarily due to the cam phaser breaking.

When a timing chain or tensioner fails it’s possible to throw timing off pretty far. Ultimately, that may lead to the 5.4L Triton valves contacting pistons. That’s an engine out failure at the least, and may even destroy the engine beyond repair. It’s not extremely common for this to occur, so we don’t mean to scare anyone. However, it is possible which is why these are important problems to look out for.

The following symptoms may indicate an issue with the 5.4 timing system:

Other symptoms may show themselves, too. However, rattling will be one of the most common symptoms of the 5.4 timing chain or tensioner failing. This is due to slack in the timing chain. Of course, rattling can be caused by many things but if you notice too much rattle it’s definitely worth looking into it. Additionally, if timing gets out of line you’ll notice rough operation. Depending on the degree of failure the rough running can be pretty severe.

Unlike the first two problems we laid out, timing chain problems should be left to experienced DIY’ers or a trusted mechanic. We highly recommend picking up a 5.4 Triton timing chain replacement kit like this one. All of the components in that kit are good things to replace while you’re in there.

If you’re going to a repair shop labor will probably work out somewhere in the $700-1,000+ ballpark. Add in the cost of the kit and this is the most expensive common problem on the 5.4L Triton engine.

The 5.4L V8 oil pan gasket is without question the most common oil leak on the engine. However, we wouldn’t really call this a true fault with the engine. Gaskets take abuse and over time can start to fail. We’re mostly throwing this in to discuss some general stuff in a second. Nonetheless, the 5.4 oil pan gasket is known to fail and begin leaking oil under the car or truck.

That said, some of these 5.4 Tritons are getting pretty old. With age and mileage there are lots of parts in any engine that wear down. Rubber hoses, gaskets, plastics, etc all take a lot of abuse with age and heat cycles. The oil pan gasket is one of the more common issues. However, as these 5.4L engines age expect the occasional problems to pop up in these areas.

Symptoms of oil pan gasket leaks are pretty basic. Look out for the following stuff:

A visible leak from the oil pan area is a dead give-away. Simply ensure it’s not dripping from somewhere up above, and if not the gasket is the likely culprit. It can also drip onto hot components and produce a little smoke or burning oil scents.

The gasket itself it pretty cheap and most decent DIY’ers should be able to accomplish a 5.4 Triton oil pan gasket repair. If you’re going to a shop they’ll probably quote somewhere around 3-6 hours of labor. This of course varies based on the Ford truck or car in question. Anyways, labor can add up to an extra $200-500.

Is the Ford 5.4 Triton Reliable?

Overall, the 5.4L Triton V8 is a solid, reliable engine. We’ll give it average to above average remarks. One thing that maybe brings it down a little are the transmissions some of the 5.4’s are mated to. We had a 2005 F-150 a while back that was on its 3rd transmission by 120,000 miles. Not exactly a great experience. However, the Ford 5.4L is still a solid engine overall.

A lot of the 5.4 reliability comes down to maintenance, and sometimes luck of the draw. Not every engine is built the same, and there are the occasional flukey cases. The one engine with horrible maintenance that somehow makes it 200,000+ miles. On the other hand, there are the well-maintained engines that simply decide to crap out early. Unfortunately, it’s one of the things we can’t always control.

However, maintenance is usually key. Maintain your 5.4 Triton engine well and it will likely reward you with a great experience. A majority of properly maintained 5.4’s shouldn’t have trouble eclipsing 200,000 miles. Not bad for longevity. However, chances are most engines will run into at least a few problems during their life.

The 5.4L V8 Triton is a solid all-around engine. Ford used this engine in a lot of flagship vehicles for a long time, including high performance cars like the Ford GT. However, every engine is prone to a few common problems and this holds true for the Ford 5.4L. Look out for faults with the ignition system, fuel pump driver module, timing chain, and oil pan gasket leaks.

A few of these might not even be totally fair to consider “problems”. Things like ignition components and gaskets are natural wear and tear items. Anyways, the 5.4L Triton is a pretty reliable engine. Keep up with maintenance and repairs as they pop up, and chances are the 5.4 V8 will hold up beyond 200,000 miles. There’s a reason Ford stuck with these engines for roughly 2 decades.

What’s your experience with the 5.4 Triton? Are you considering buying one?