The Ford 1.5 EcoBoost turbo engine came out in 2014 as a slightly smaller version of the 1.6L engine. This was in part due to Chinese vehicle taxes, which are a lot lower for 1.5L or smaller engines. Despite the slight downsize the engine still offers similar performance to the 1.6 EcoBoost. Power is nearly identical at 181 horsepower for the Ford Fusion and Focus models.

All in all, the 1.5 EcoBoost is a solid engine with a good balance of power, reliability, and efficiency. Although, no engine is perfect and that applies to the 1.5 turbo inline-4 too. In this article, we discuss a few common Ford 1.5 EcoBoost engine problems as well as overall reliability. 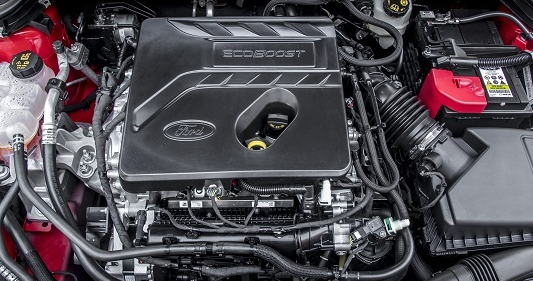 What Cars Use the 1.5L EcoBoost?

Before diving into the common problems discussion we’ll lay out a little info about the 1.5 EcoBoost engine. It’s in use in the following Ford years and models:

US models include the Ford Focus and Fusion which offer 181 horsepower and 185 lb-ft of torque. There’s also the US model Ford Escape 1.5 EcoBoost with 179 horsepower. Some 1.5L turbo engines in foreign models only offer 148-158hp.

Specs for the Ford 1.5 inline-4 turbo engine are as follows:

These are all pretty standard specs for modern high efficiency engines. Small displacement helps with fuel economy and lower emissions. A turbo allows the small 1.5 EcoBoost to make solid power for its size. Direct injection is great for performance and emissions reasons, but does have a downside or two that we’ll be covering.

A few common issues with the Ford 1.5L EcoBoost turbo engine include:

Throughout the rest of this article we’ll discuss the above problems in-depth. We also finish up with some thoughts on 1.5 EcoBoost reliability. However, it’s important to knock out a few quick notes before. We’re referring to these as the MOST common Ford 1.5 EcoBoost problems for good reason. It doesn’t necessarily mean they’re truly common in a traditional sense of the definition. Rather, when issues or failures do occur these are a few common areas.

That said, all engines are prone to problems. It’s especially true when dealing with some newer turbo, direct injection engines. There is generally more technology, more parts that can fail, and higher standard maintenance costs. We’ll highlight that fact in one of the sections coming up. Anyways, let’s jump in and look at a few problems with the 1.5L EcoBoost engine.

We dug into this problem a little bit in our 1.6 EcoBoost common problems article. There were a couple things to unpack with that engine. Some of the same problems seem to be an issue on the newer 1.5 inline-4 engines, too. There is a lawsuit floating around targeting the 4-cylinder Ford EcoBoost engines due to some cooling related problems. It doesn’t appear as common on the 1.5 as the 1.6, however, it’s still enough that the lawsuit does include the 1.5 EcoBoost.

We typically avoid covering recall and lawsuit related stuff simply because it’s not hard to find info on it. Anyways, the failure seems to lie within the design of the block and head. Coolant leaks into the combustion chambers, and can cause low coolant, corrosion, misfires, and possibly even engine failure.

For now, we’ll leave this problem at that. Looking at Ford Fusion, Focus, and Escape forums there are some 1.5 EcoBoost owners that have run into these coolant issues. In a few cases it leads to complete engine replacement. As with many things on the internet this problem is likely blown out of proportion to some extent. However, it is something that potential Ford 1.5 owners should be aware of.

Unfortunately, there is no straight-forward fix to internal issues like this. It’s part of the reason some end up with new engines. Hopefully Ford is helpful in addressing these problems or the lawsuit helps out affected owners.

Anyways, it’s important to keep an eye on coolant levels. Low coolant may cause over-heating, which could lead to other long-term reliability and longevity concerns.

Carbon build-up is a topic that pops up a lot with modern engines. In the past, port injection was the primary fuel delivery method. However, direct injection (DI) provides a lot of performance and efficiency benefits. As such, many engines have switched over to DI – including the Ford 1.5 EcoBoost. It’s great tech for many reasons, but does have an inherent flaw.

All engines produce some degree of oil blow-by. This oil then makes its way into the intake tract where it sticks to intake ports and valves. With tradition port injection fuel sprays in the intake ports where it wipes away any oil blow-by. On the other hand, DI sprays fuel directly into the cylinders. There is nothing to clean the valves. This leads to carbon build-up on the 1.5L EB intake valves and ports.

It’s rare for carbon build-up to cause any other reliability or longevity concerns. Some 1.5 EcoBoost engines will likely live their whole lives with excess carbon deposits. However, it can cause several drivability and performance issues so it’s good maintenance to clean the valves. Expect carbon build-up problems on the Ford 1.5 EcoBoost to show around the 80,000 to 120,000 mile ballpark.

Symptoms of excess carbon deposits on the Ford 1.5 turbo engine include:

When excess carbon deposits form they begin restricting air-flow into the cylinders. In turn, the 1.5 EcoBoost will lose power and sometimes it can be rather significant. However, it’s one of the hardest symptoms to notice. Carbon build-up occurs over years and tens of thousands of miles, so the power loss is gradual.

Otherwise, look out for poor overall engine operation. You may notice misfires, rough idle, stuttering while accelerating, etc. However, these can all be common symptoms for a handful of other issues.

Walnut blasting is a highly proven method for cleaning carbon deposits off intake valves and ports. It’s mostly labor to clean the intake valves, so it’s cheap maintenance if you’re a capable DIY’er. The job requires a shop-vac and walnut media shells.

The 1.5L inline-4 intake manifold must be removed to access the intake ports. Once in there the actual walnut blasting process takes roughly an hour or two, depending on how bad the build-up is. Expect this job to run about $400-600 at a repair shop.

This is yet another flaw with some direct injection engines. Many manufacturers have struggled with high-pressure fuel pumps, injectors, and other fueling issues since switching to DI. Some Ford Fusion, Focus, and Escape models with the 1.5 EcoBoost run into problems with fuel injectors.

There are a few ways in which fuel injectors may fail. One of the most common seems to be fuel injectors clogging on the 1.5 GTDI engine, so that’s our main focus here. However, leaking or unresponsive injectors also happen sometimes.

Of course, fuel injectors are important to proper operation of the 1.5 EcoBoost. Faulty injectors can lead to a plethora of drivability issues. It’s really not a very common problem, but look for potential issues north of 70,000 miles.

A few symptoms that may point to an issue with the EcoBoost fuel injectors are:

With a clogged injector the problematic cylinder won’t receive enough fuel flow. In the case of a leaking injector there’s too much fuel. Both Ford 1.5 EcoBoost injector problems may cause long cranks, rough idle, and misfires. Leaking injectors may cause poor fuel economy, too.

There are a couple options depending on the exact fault of the fuel injector. Leaking injectors likely need new seals, but it’s a time consuming process. There are also ways to clean the fuel injectors if they are clogging. However, that’s not always the best long-term solution.

Fortunately, a set of 4 fuel injectors for the 1.5 EcoBoost only cost about $100-300. Since they’re relatively cheap some choose to simply replace the injectors. Fixing the seals or cleaning them may cost as much as new injectors if the work is done at a repair shop. However, it’s a good way for the DIY crowd to save some money. The below video gives an example of cleaning the Ford 1.5L injectors.

We’ll be quick on this section before moving onto 1.5 EcoBoost reliability. Spark plugs and ignition coils are standard maintenance. As such, we don’t believe it’s fair to consider them a problem on the EB turbo engine. Premature failures do happen, but they’re pretty rare. However, this topic about plugs and coils is here for good reason.

Modern turbo engines – like the 1.5 EcoBoost – can be a bit more demanding on standard maintenance. Boost from turbos causes high cylinder pressures, which requires a stronger spark. In turn, spark plugs and ignition coils wear down faster when compared to naturally aspirated engines. However, the 1.5L EcoBoost is a small engine running relatively low boost and power. It shouldn’t be quite as demanding as some of the larger engines like the 2.7 or 3.5 EcoBoost.

Some symptoms of old, worn spark plugs and ignition coils include:

As plugs and coils wear down they cannot fully ignite and burn the air-fuel mix in the cylinder. This causes misfires, which is usually the first symptom. As they continue aging and getting worse you might notice misfires and poor overall performance.

Spark plugs and ignition coils are some of the easiest maintenance items to knock out. Even novice DIY’ers can knock it out in the driveway in an hour or two at the most. A set of 4 spark plugs comes in around $30-50 while ignition coils can be about $100-200.

Is the Ford 1.5 EcoBoost engine reliable? Yes, we believe the 1.5L inline-4 turbo engine receives average to above average remarks for reliability. There aren’t many major design flaws with the Ford 1.5 EB. There are some lawsuits and concerns about engine block/head issues that cause coolant to leak into cylinders. While it can happen the problems are likely blown out of proportion to some extent.

That said, some reliability simply comes down to the luck of the draw. We can’t control that aspect, but maintenance is a key piece we can control. This stuff applies to any engine – not just the 1.5 EcoBoost. Use quality oils, change fluids on time, and fix issues quickly if they pop up. Do all of this and most will likely have a good, reliable life from the 1.5L turbo engine.

The 1.5L EcoBoost made its debut in 2014 as a slightly smaller variant of the older 1.6 EcoBoost. It offers a great all-around balance of price, fuel economy, reliability, and performance. 181 horsepower may not be enticing to some, but it’s plenty of power for many Focus, Fusion, and Escape owners.

Like all engines, there are a few problems with the 1.5 EcoBoost to look out for. There are some lawsuits regarding coolant leaking into cylinders, and some cases lead to full engine replacement. Fuel injectors occasionally have issues, but it’s a pretty minor and inexpensive problem in the grand scheme. Otherwise, carbon build-up is simply a downside to an otherwise great technology.

What’s your experience with the 1.5L engine? Are you considering one?