The Chrysler 3.8 V6 engine made its debut all the way back in 1991. It remained in use up until 2011 in the Jeep Wrangler JK – an impressive 20 year life. Chrysler/Jeep 3.8L engines went through a few updates during that time to improve power and efficiency. However, some things did not change too much and reliability is one of them. In this article, we discuss some common Chrysler 3.8 V6 engine problems along with reliability, specs, and more.

*We may also refer to the Chrysler engine as the Jeep 3.8L engine 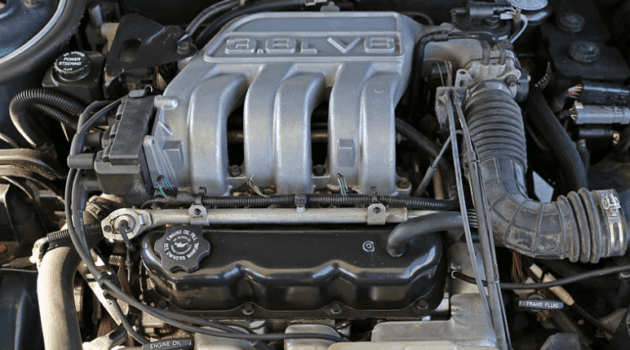 Some dislike the 3.8L engine as they consider it under-powered. This may be true to some extent, especially on the newer minivans and Wrangler JK, given it’s an early 1990’s design engine. Power and performance have come a long way since then. However, one major issue is the Jeep Wrangler is a larger vehicle than the older models and didn’t have great gearing for its size and weight. Anyways, specs for the Chrysler & Jeep 3.8 liter engine are as follows:

This engine is a very similar design to the Chrysler 3.3L V6 engine. Simply larger with a few updates to support the larger displacement. Anyways, none of these specs are terribly impressive by modern day standards. However, remember the Chrysler/Jeep 3.8 V6 began in 1991.

Back then it was common to use cast iron blocks for their strength, but it’s too heavy a design for most modern engines. The Chrysler 3.8L engines also uses a pushrod OHV design rather than overhead cams.

Chrysler did make some good updates and upgrades to the engine over the years. We won’t get in-depth but some updates include the intake system, compression ratio, and camshafts. In the early 2000’s the 3.8 V6 peaked at 215 horsepower and 245 lb-ft. Later updates actually brought the 3.8 liter engines power down a little bit. However, they help make a broader torque curve for better overall performance.

3.8 liter V6 engines are in the following Chrysler and Jeep models:

Volkswagen also used the engine in their 2009-2010 Volkswagen Routan. This model is basically the Chrysler RT minivan platform simply with Volkswagen badging.

A few of the most common Chrysler 3.8 engine problems include:

Throughout this article we will examine the above Chrysler 3.8 engine problems in-depth. However, we must add a few quick notes before moving along. We’re referring to these as the most common engine problems. It doesn’t always mean they’re common issues in the true sense of the definition. Rather, when problems or failures occur these are a few of the common areas.

Anyways, the Chrysler & Jeep 3.8 V6 engine does offer solid reliability. No engine is perfect, though. Some are always bound to have bad experiences while other engines last 250,000+ miles. It’s also an older engine, which can bring along more concerns over reliability and engine problems. We’ll circle back to discussing Chrysler 3.8L reliability at the end of the article. For now, let’s discuss a few common Chrysler 3.8 engine problems.

We don’t really love bringing up some of the more controversial topics. Some claim high oil consumption on the Chrysler 3.8L engine is just hearsay. Plenty of others have firsthand experience with oil consumption problems on the Chrysler 3.8 V6. The truth likely lies somewhere in the middle, and we do believe the internet has a tendency to blow things out of proportion.

Regardless, excess oil consumption is a topic that comes up often. In most cases there aren’t any major concerns when it comes to long-term reliability. However, ensure the 3.8L V6 doesn’t run low on oil if it is consuming a lot. Driving too much on low oil is never a good thing and can cause longevity and reliability concerns.

Sometimes high oil use does point to a more serious underlying problem, though. As engines near the end of their lives they can start burning more oil as clearances widen, piston rings crack, bearings wear down, etc. In other words, on old high mileage Chrysler 3.8 engines too much oil consumption can be a cause for concern.

A few symptoms of excess oil consumption problems on the Chrysler 3.8 V6 engine include:

Really the main symptom of the excess oil consumption we’re discussing is the consumption itself. Some Chrysler 3.8L engines burn about a quart or more every 1,000 miles. You might also notice burning oil smells or smoke from the exhaust but this may indicate a deeper issue.

As engines age you may start noticing those symptoms alongside engine knocks, ticking, etc. This could point to an engine that’s simply on its last leg – separate from the “natural” high oil consumption.

Again, on most 3.8 liter V6 engines there don’t seem to be any serious reliability or longevity concerns. Simply ensure the oil is filled up as running low can make problems worse. Otherwise, heavier viscosity oils may help but stay within Chrysler’s recommendations for the 3.8 V6 engine.

Up next are coolant leak problems due to the lower intake manifold gasket on the Chrysler 3.8 engine. This issue is actually most prevalent on the 2001+ Jeep and Chrysler engines. This is when Chrysler moved to the updated intake manifold to help improve power and performance.

Anyways, there isn’t really too much to this problem. The lower intake manifold gasket simply goes bad with age and mileage. Cracks develop and coolant begins leaking from the manifold. It’s a fairly common issue on the 3.8L V6 Chrysler and Jeep engine.

Look for these issues to mostly pop up north of 8 years old and 100,000 miles. Problems can arise earlier but it’s mostly due to age and wear + tear on the lower manifold gasket.

Symptoms of lower intake manifold gasket issues on the 3.8L V6 engine include:

Visible coolant leaks are the most frequent symptom of bad intake manifold gaskets on the Jeep 3.8 engine. You may also notice you’re running low on coolant often. However, chances are the leak will be visible before then.

The Chrysler 3.8 intake manifold leak often drips onto the transmission bell housing. Water/coolant in that area can indicate an issue. Steam is also possible if the coolant is dripping onto hot parts and burning away.

Gaskets are typically cheap parts to replace, so that’s the good news. The intake manifold also lays at the top of the Chrysler 3.8L V6, so it’s a fairly simple job. A good mechanic should knock the job out in no more than 1-2 hours. As such, $150-250 should be standard for labor and the gaskets come in at less than $50.

It’s a pretty minor issue in the grand scheme. DIY’ers can even knock out this job for less than $50. However, a few bolts can be a pain so be patient and ensure the new gasket seals properly.

Well, here we have another leak on the Chrysler & Jeep 3.8L engine. There is actually a technical service bulletin (TSB) from Jeep regarding these problems. Timing cover oil leaks do also affect Chrysler models with the 3.8 V6 engine. Anyways, the issue at hand is the o-rings within the timing cover.

Faulty o-rings within the timing cover can crack, deform, break etc. This causes an oil leak to develop from the timing chain cover. Look for visible oil leaks in that area. This is probably one of the less common issues we’re covering, so we’re keeping it short.

Additionally, we’re covering general oil leaks next so we’ll discuss symptoms and replacement there. Anyways, hopefully faulty timing chain cover oil leaks were fixed under warranty. If not, you’ll be stuck paying out of pocket.

There’s a joke we came across a while ago, “If your Jeep isn’t leaking oil then you don’t have any oil left.” Coming from the BMW world we can certainly relate. Oil leak problems don’t only affect the 3.8 V6 Jeep models, but also the Chrysler models. In reality, oil leaks affect many engines so Jeep, Chrysler, and BMW aren’t alone here.

We went over the Chrysler 3.8 manifold coolant leak already, and oil leaks aren’t much different. Gaskets, seals, and o-rings simply wear down with age and mileage. Cracks develop and leaks form. When it comes to oil leaks on the 3.8L V6 it’s mostly due to older age and higher mileage.

Our main focus here is the Chrysler 3.8 valve cover gaskets. They appear among the most common oil leaks on the 3.8 liter V6 engine. However, main crankshaft seals and oil pan gasket leaks do happen too. Anyways, look for these leaks primarily after 8+ years and 100,000+ miles.

A visible leak is going to be a dead give-away. If you notice oil spots after parking your car then it’s time to track down the oil leak source. The timing cover will often drip onto the ground as with the oil pan gasket and main seals.

However, the valve cover gaskets lie at the top of the engine. In these cases it’s possible for small oil leaks to simply burn off before hitting the ground. Look for burning oil smells or smoke from the Chrysler 3.8 engine.

Parts to fix an oil leak are generally inexpensive as with the intake manifold coolant leak we discussed. It’s usually gaskets, seals, or o-rings causing the Chrysler 3.8 engine to leak oil. Most of these parts run about $10-50, so that’s the good news.

The bad news is that oil leak repairs can be a bit more labor intensive. Of course, it depends on the exact leak but labor can be about 1-5 hours so add in labor costs there. DIY’ers can knock out these leaks for next to nothing.

Is the Jeep/Chrysler 3.8 V6 engine reliable? We believe this engine earns average remarks for reliability. The Jeep community certainly isn’t going to hand the title to the 3.8L engine compared to the AMC 4.0L straight-6 Jeep engine. However, the Chrysler 3.8 does still offer solid reliability all around. High oil consumption and some coolant and gasket leaks can be common issues.

Some Chrysler 3.8 engines fail early and those owners are quick to hate on the engine. Others hold up well beyond 250,000 miles with few or no issues along the way to that mileage. This same concept applies to all automotive engines. There will always be some great ones, and some unfortunate early failures. We don’t always have full control and it boils down to luck of the draw.

However, we can control maintenance. Change fluids on time, use quality oils, and address issues if and when they occur. Do this on the Jeep & Chrysler 3.8 engine and it can offer good reliability. Again, there are handfuls that make it beyond 250,000 miles which is pretty good longevity.

What’s your experience with the Chrysler 3.8 V6? Are you considering one?