In 2007, Toyota introduced the 5.7 V8 for use in the Tundra, Sequoia, Land Cruiser, and Lexus LX 570. The engine is also known as the Toyota 3UR-FE, and remains in the same vehicles as of 2021. It offers a respectable 381 horsepower and 401 lb-ft of torque. For some time, Toyota also offered a TRD supercharger for the 5.7L engine bringing output to 504hp and 550tq. The 3UR-FE has plenty to offer, but no engine is perfect. In this article, we discuss a few of the most common Toyota 5.7 V8 engine problems and reliability. 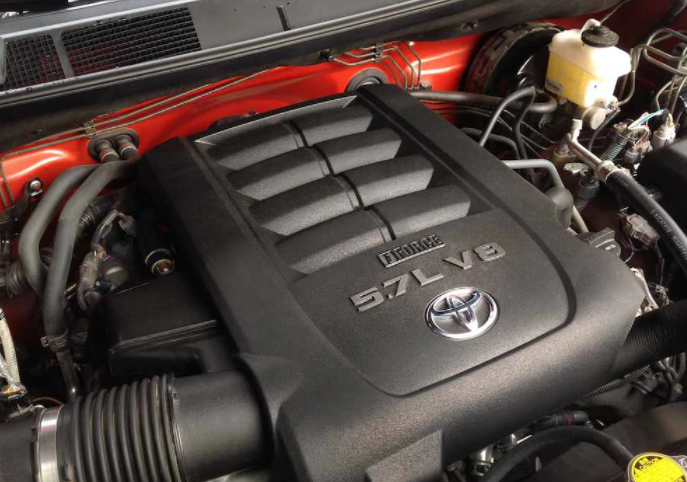 What Cars Use the 3UR-FE?

Toyota 3UR-FE 5.7L engines are in the following vehicles:

*Note: for some years and models the 3UR-FE was not the standard engine, but was an upgrade option.

A few of the most common issues on the 5.7 3UR-FE engine include:

We’ll discuss the above issues in-depth through the rest of this article and finish with overall thoughts on 3UR-FE reliability. However, we have a few quick notes before diving in. We’re classifying these as the most common Toyota 5.7 engine problems for good reason. It doesn’t mean the problems are truly common. Rather, when failures do occur these are a few of the most common areas.

Additionally, the 5.7 V8 has been around for 14 years now. Newer models will likely be more reliable in the short-term simply due to standard wear and tear with age and mileage. That said, the Toyota 5.7 is a great engine that’s built to last.

Contrary to what we just stated, cam tower oil leaks are truly a common problem on the Toyota 3UR-FE engine. Google cam tower, what is a cam tower, etc. Almost all of the top results are about the Toyota Tundra and the 5.7L engine. Sure, the internet has a tendency to blow things out of proportion. Especially when it’s an expensive repair as with the Toyota 3UR-FE cam tower leaks.

The cam towers are under the valve covers, and Toyota uses an RTV sealant rather than a gasket. Over time, the sealant wears down and causes the cam towers to develop oil leaks. The leaks usually start towards the rear of the Toyota cam towers and allows oil to drip onto the extremely hot exhaust manifold. As such, it’s an important issue to fix since it can cause fire and safety hazards.

Again, the cam tower leaks are actually a pretty common problem on the Toyota 5.7 engine. Look for issues to pop up in the 50,000 to 100,000 mile ballpark. However, leaks have developed even sooner. Some Toyota owners have luck haggling Toyota to help or cover the repair bill since it’s an expensive issue.

A few symptoms that may indicate the 5.7 V8 cam towers are leaking include:

Symptoms of Toyota cam tower leaks are pretty basic. You might notice a visible leak, but it’s possible all the oil is burning off before hitting the ground. Since it usually drips onto the 5.7 exhaust manifold you’ll likely smell burning oil and see trace amounts of smoke.

Fixing the cam tower oil leak involves removing the valve cover(s). That’s already fairly labor intensive, but that’s just the start of the job. The below video paints a good picture of the work and labor involved in this job. It should be left to DIY’ers with reasonable experience and knowledge. Otherwise, Toyota 5.7 cam tower oil leak fixes can add up to $1,500+.

Water pump issues are common on many engine, so the Toyota 3UR-FE 5.7L engine isn’t alone here. It’s not as common as the cam towers, but water pump failures do happen on the 5.7. Water pumps are designed with a weep hole to allow coolant to leak out. When the internal seal or bearing fails coolant begins leaking out of the weep hole. This helps prevent the water pump from causing further damage to itself.

Fortunately, that’s the exact way in which these Toyota 5.7 water pumps fail. The water pump continues to partially do its job circulating engine coolant and keeping temps in check. It’s still a failure that should be fixed as soon as possible on the 3UR-FE engine. However, at least it’s not a catastrophic water pump failure that requires the engine be shut down immediately.

The water pump could still fail in a catastrophic way, but it’s much less likely on the 5.7L V8. Though, if this does happen it’s important to shut the engine down to avoid severe overheating and further damage. Water pump leaks on the Toyota 5.7 usually show up in the 60,000 to 100,000 mile ballpark. However, plenty of these pumps hold up well beyond 150,000 miles.

Look for the following symptoms that may point to a water pump problem on the Toyota 5.7 engine:

Again, the most common cause of Toyota 3UR-FE water pump failure is an internal failure that causes coolant to leak from the weep hole. That will lead to a visible leak and low coolant if not addressed quickly. If the 5.7 V8 pump completely fails it can cause overheating, a check engine light, and fault codes.

Unlike some other makes and models we discuss a Toyota 5.7 water pump replacement is pretty inexpensive. The 3UR-FE water pump itself comes in around $70-150. You might consider replacing the thermostat and serpentine belt while in there. DIY water pump jobs on the 5.7 V8 are fairly simple, but it does take some time to access the pump. Labor usually clocks in around 3-6 hours so expect to pay another $250-600 for a repair shop to replace the Toyota 5.7L water pump.

Alright. We don’t feel like this should really make the list. Some may consider higher oil consumption an issue on the 5.7 liter V8. However, it doesn’t seem to have an ill effects or reliability concerns. As such, we’re really just discussing high oil consumption for the sake of being out of other things to talk about.

There are a few things to this. High oil consumption on the Toyota 5.7 may, in part, be due to piston ring clearance. It also could have to do with poor quality oils used in the past. Another factor is the PCV (positive crankcase ventilation) system. Faulty PCV valves are known to increase oil consumption.

Again, we’re really only throwing this in for a quick discussion point. The 5.7L 3UR-FE is an excellent engine all around, and there aren’t many other common problems to discuss. High oil consumption also doesn’t appear to have any effects on overall reliability or longevity.

Some things you can do that may help reduce oil consumption on the 3UR-FE include:

High quality synthetic oils may help reduce oil consumption a little. The recommended oil weight on the Toyota 5.7 liter engine is 0w20. However, 30 weight oils are also acceptable and a thicker oil may experience less blow-by. Also avoid excess idling especially on a cold engine since that can increase oil blow-by. Otherwise, check and service the PCV system.

Is the 5.7L Toyota 3UR-FE engine reliable? Yes, we believe the Toyota 5.7 engine earns above average remarks for reliability. Cam tower oil leaks and water pump leaks are two of the most common problems owners run into. The cam tower oil leaks can be an expensive fix, but the issues are surely blown out of proportion to some extent.

Otherwise, there really aren’t many common failures on the 5.7L V8. Most engines experience problems at some point in their lives, but that’s simply the nature of owning a car or truck. Engines have lots of moving parts subject to abuse and wear & tear. Maintenance is one of the keys to having a good experience with any engine, and the Toyota 5.7 V8 is no different.

Use high quality oils, change the fluids on time, and fix problems in a timely manner if and when they occur. Do all of this and chances are the 3UR-FE will provide exceptional reliability. The Toyota 5.7 engine is well built and designed to last well beyond 250,000 miles.