The Toyota 2ZR-FE, and close variants, is one of Toyota’s flagship 4-cylinder engines in the modern era. Introduced in 2007 to replace the 1ZZ-FE power unit, the 2ZR-FE was designed with longevity and efficiency in mind. Transplanted into some of Toyota’s most notable vehicles, including the Prius, Corolla, and Matrix, the 2ZR-FE was expected to uphold Toyota’s stellar reliability record. Overall, the 2ZR-FE has done just that. While the 2ZR-FE is generally considered one of the most reliable engines on the market, it still isn’t without its faults. In this article, we will discuss the Toyota 2ZR-FE engine and some of its more common issues. 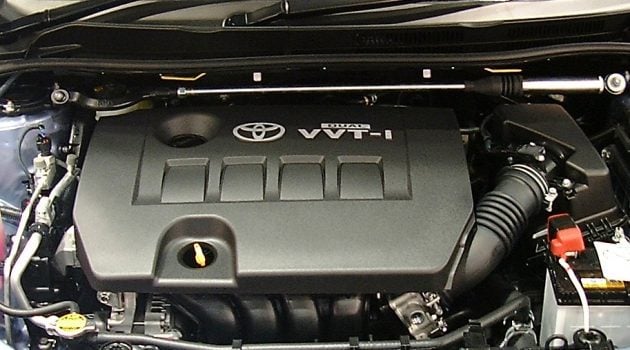 By this point, Toyota has mastered the craft of engine building. Having created some of the most iconic and longest-lasting engines of the past century, they have had ample time to learn and adapt. Much of their prior knowledge has been applied to the 2ZR-FE. There is an abundance of information on the 2ZR-FE in circulation, but here are the basics:

What Toyota Vehicles Use the 2ZR-FE Inline-4?

As the 1ZZ-FE was widely applied to much of Toyota’s lineup, the replacement 2ZR-FE was also used in many Toyota vehicles. As a result, many of the vehicles that employ it are only available in certain markets. In terms of North American applications only, the 2ZR-FE was used in all NA Corolla, Yaris, Matrix, Pontiac Vibe, Scion xD, and Lotus Elise models.

A few of the most common issues and failures on the 2.5L 2AR-FE engine include:

Below we will discuss each of these problems in-depth. However, let’s add a few quick notes before jumping in. First off, the Toyota 2ZR-FE is a highly reliable engine. The faults we’re discussing are not common in the sense that they affect a large number of engines. Rather, when problems do occur, these are a few of the common areas. That said, the 2ZR-FE 1.8L engine may run into other minor issues we’re not discussing in this article.

Oil consumption issues on high mileage engines have been a continuous problem for Toyota among many of their engines. High oil consumption was a definite concern for the 1ZZ-FE engine that preceded it. This issue unfortunately carried into the production of early model 2ZR-FE powered vehicles. The issue stemmed from faulty or hazard-prone piston rings which allowed oil to leak into the combustion chamber. While the issue was certainly problematic, as it worsened as mileage increased, high oil consumption was much less severe for 2ZR-FE engines compared to the 1ZZ-FE or 2.4L AZ-FE engine.

This issue was most prominent in 2008-2010 models equipped with an early production 2ZR-FE engine. It is important to note that the issue was not fatally severe in most cases. When compared with other oil-consuming engines from other manufacturers, the 2ZR-FE’s consumption is considered negligible.

A few common symptoms that indicate that your 2ZR-FE is burning oil include:

The easiest way to tell if your 2ZR-FE powered car is burning oil is to check the oil level frequently. This is the case for any combustion engine and should be done weekly or before an extended drive. A low oil indicator is another telltale sign that your 2ZR-FE is burning oil or has an oil leak. If there aren’t any visible leak spots on the ground, it would likely be caused by the former.

As high oil consumption in 2ZR-FE engines is most often caused by oil leaking into the combustion chamber through the piston rings, smoke from under the hood or bluish smoke coming from the exhaust is another telltale sign. This is usually accompanied by the smell of burning oil. If you see or smell any of these symptoms, it is likely the result of the engine consuming oil.

As mentioned previously, even though high oil consumption is a noted problem on early model 2ZR-FE engines, it is relatively rare. Toyota does offer solutions to this problem should your vehicle be affected. At the end of 2008, Toyota released a bulletin detailing the issue and reporting an available fix. In most cases, high 2ZR-FE oil consumption can be solved through a firmware update to the ECU. In almost all cases, this stopped all oil consumption issues.

If you do experience any of the symptoms above, do not hesitate to reach out to your nearest Toyota dealer to have your ECU updated.

Another noted, yet relatively uncommon, 2ZR-FE issue is a coolant pump failure. The issue has been reported most frequently at 30,000-mile intervals. Toyota has recognized this problem and has included it in most factory warranties. There are a couple of reasons why a 2ZR-FE coolant pump might need a replacement.

One of the more common reasons is the pump leaking coolant. However, the 2ZR-FE pumps do occasionally fail internally and lose the ability to flow enough coolant through the engine.

The latter is the more concerning of the failures since the engine can quickly overheat without proper coolant flow. Again, this isn’t a truly common problem that affects a lot of 2ZR-FE engines. However, it’s important to beware if your water pump does fail. You’ll want to pull over in a safe location quickly and avoid running the engine until the water pump is fixed.

Driving with an overheating engine may cause further damage to the Toyota 2ZR-FE cylinder head. Worst-case situations are rare with proper due diligence, but damage caused by overheating is possible if you continue driving without addressing the underlying issue.

A few symptoms that indicate coolant pump failures on the 1.8L inline-4 Toyota engine include:

Usually, the Toyota 2ZR-FE water pumps simply fail due to small leaks. This will leave a visible puddle of coolant under the engine after sitting for long periods. If the pump actually fails internally, the engine will quickly begin to overheat. It’s not unusual for coolant to begin boiling and spilling out of the coolant tank. You’ll also notice a check engine light on your dash. If you continue driving you’ll likely receive an indication the engine is overheating. At this point, it’s important to pull over as soon as it’s safe.

Unlike the 2ZR-FE oil consumption issue listed above, coolant pump issues cannot be resolved with a simple ECU update. With that being said, a coolant pump replacement is one of the least intensive engine repairs. If your 2ZR-FE powered vehicle is still within its factory Toyota warranty, the repair should be covered in its entirety. However, If your vehicle is out of warranty, the repair won’t likely cost you an arm and a leg. A certified Toyota repair facility will usually charge around $600-$700 for the repair. However, if you are somewhat handy with a spanner, you can pick up the necessary parts for around $200.

Introduced in 2007, Toyota’s Valvematic system was designed to refine Toyota’s existing VVT-i variable valve timing system. The update featured a new method of controlling intake valve lift volume through a new mechanism. Toyota’s ultimate goal was to increase combustion efficiency and lower fuel consumption. As with most new vehicle technology, the Valvematic system had some growing pains upon its release.

As the system is more mechanically complex than the previous VVT-i setup, there is more to go wrong. It is widely concluded that the Valvematic system is still quite reliable, but should something go wrong with it, a wide array of symptoms can occur.

The most common reasons that Valvematic systems fail include simultaneous issues with the 2ZR-FE water pump, and hitting severe bumps while turning. Many Valvematic issues have been linked to dirt in the intake manifold, which can be caused by dislodged debris from hitting rough potholes while cornering.

A few symptoms that indicate a Valvematic failure on the 1.8L inline-4 Toyota engine include:

In most cases, the first sign of a failing Valvematic system will be a rough engine idle. While there are many causes for a rough idling engine, if the issue is accompanied by difficulty going up large hills or misfires under heavy load, a Valvematic issue is a common culprit. Valvematic failure often alerts itself with a loud squealing sound as well, as this type of failure is often linked with a failing or faulty coolant pump. The sound is caused by coolant leaking onto rotating Valvematic components that squeak when covered in coolant.

Once again, a very rare occurrence, but if your 2ZR-FE Valvematic system should fail, the only solution is a replacement. As with the previously listed issues, the fact that we are dealing with Toyota and not another manufacturer is beneficial to your pocketbook. Valvematic failure is another item included in your factory Toyota warranty so, if your vehicle is covered, a Valvematic replacement won’t cost anything out of pocket. If your vehicle is out of warranty, the repair is most frequently quoted at around $700.

The 1.8L 2ZR engine from Toyota surely won’t impress anyone with its power and performance. However, this engine was designed for use in basic point A to point B cars while delivering good reliability and fuel economy. Overall, it’s a solid engine that does its job very well.

Excessive oil consumption due to piston and piston ring design flaws is definitely the biggest concern with the Toyota 1.8 inline-4 engine. It’s a very real problem, but only affects a small number of 2ZR engines in any significant way. Nonetheless, it was a big enough issue for Toyota to address with a longer warranty and updates.

Otherwise, these engines are only getting older so some standard wear and tear repairs will pop up from time to time. Oil leaks from the timing chain tensioner and valve cover gasket are fairly common with age. Most importantly – ensure you look for a clean engine and continue maintaining it well. With proper maintenance, the 2ZR-FE can deliver great reliability and long life.