The Toyota 2UZ-FE is a 4.7L V8 that made its debut in the 1998 Land Cruiser. Output varies from 228-271 horsepower depending upon the specific year and model. Later 2UZ-FE engines with VVT-i generally offer more performance than earlier versions. Anyways, the Toyota 4.7 V8 offers a solid balance of performance and reliability. Though, there is no perfect engine and no exceptions apply here. In this article, we discuss some common problems with the Toyota 2UZ-FE along with overall reliability. 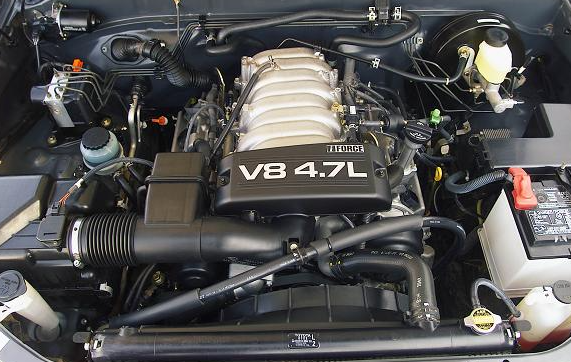 We’ll break this down by variants of the 4.7L V8, and quickly discuss a few of the changes. The 2UZ-FE uses a cast iron block for durability due to its use in trucks and SUV’s. It’s a DOHC engine built to deliver strong torque for its era. Original 4.7 V8 engines are in the following Toyota and Lexus models:

In 2004, Toyota began phasing out the original 2UZ-FE variant. The 2nd version shares the same engine code and base design. However, Toyota adds VVT-i and electronic throttle control to improve efficiency and performance. This 2UZ-FE engine is in the following:

A few common problems with the Toyota 2UZ-FE engine include:

We’ll break down the above common problems in greater depth for the remainder of this article. At the end we also discuss overall reliability of the Toyota 2UZ-FE 4.7 V8 engine. However, it’s important to add a few quick notes before we move on. We’re referring to these as the most common issues. It doesn’t mean they’re truly common in the sense they affect a large number of Toyota 4.7L engines. Rather, when problems occur these are a few of the most common areas.

As with many Toyota engines – the 2UZ-FE offers good reliability. A few of the things we’re discussing probably aren’t even fair to call issues or failures. Regardless, all engines are prone to various problems. Point is – this article is by no means an exhaustive list of everything that can or may go wrong on the 2UZ-FE V8 engine. With that out of the way let’s jump in and discuss the above Toyota 2UZ-FE engine problems.

Exhaust manifolds cracking might be the single most common issue with the 2UZ-FE engine. They may also be referred to as headers or exhaust headers. Toyota 2UZ-FE manifolds generally crack around the flange. The main cause of the design flaw is due to emissions regulations and having to move the cats closer to the manifold.

In the grand scheme Toyota 2UZ-FE manifold problems are a pretty minor issue. Cracks usually result in a small exhaust leak and some ticking sounds. If the crack(s) grow too large then passing emissions may become an issue. Otherwise, 4.7 V8 manifolds cracking don’t pose any serious risks to further damage or issues with the engine.

Symptoms of cracked exhaust manifolds on the Toyota 2UZ-FE engine include:

A ticking sound is the most common symptom of exhaust manifold cracks on the 4.7L V8. It’s also usually the only symptom most will notice. However, you might also notice the 2UZ-FE engine bay smells like raw exhaust gas. If you’ve ever smelled a fully catless exhaust it would be a similar but less distinct smell.

If the exhaust leak is really bad it could trigger a check engine light and cause issues with emissions inspections. This is more common in cases where an exhaust manifold has been cracked for a while and it’s expanding.

There are a few potential options if your Toyota 2UZ-FE exhaust manifolds crack. Some try to look for inexpensive solutions like CRC exhaust cement (as seen in the below video). However, it’s likely those are short-term fixes since the exhaust manifold gets incredibly hot. Metals expand with heat and most sealants will likely fail over time.

Another option would be adding additional metal and welding the cracked areas. Otherwise, replacing the entire exhaust manifold is likely the best long-term fix. Costs can add up if you go this route, though. Aftermarket headers are also an option, and may even be cheaper than replacing the OE exhaust manifolds.

Timing belts aren’t really a true issue on the Toyota 2UZ-FE. There are no major design flaws that cause frequent timing belt problems. It’s just a normal wear and tear item that requires replacement at recommended intervals. The interval for the 4.7L V8 is about every 90,000 miles, however many last longer than that. Be cautious trying to stretch the life of the timing belt too far, though.

Toyota 2UZ-FE engines are interference engines. There is overlap in the area the piston and valves travel. If timing jumps too far or the belt snaps then valves can contact pistons. At the least that will likely result in bent valves for the Toyota 4.7 V8. In severe cases further damage can occur. Either way, it’s not really good news.

Again, this isn’t something we would consider a true problem. Stay on top of timing belt changes. When the service life is close to ending some occasional visual inspections can go a long way. It’s a minor standard maintenance item that can cause serious damage if something goes wrong.

A few symptoms of timing belt problems on the Toyota 2UZ-FE are:

Sometimes it’s hard to notice any symptoms at all before the 4.7L V8 timing belt fails. You might notice odd engine sounds like ticking or slapping if the belt develops some slack. However, that’s not always the case. Hence why occasional inspections can go a long way.

If the belt slips or snaps you’ll likely notice a lot of symptoms immediately after the failure. Misfires, check engine light, and poor overall engine operation are symptoms if the belt slips and cause timing to jump. If the belt completely fails…you’ll know right away.

Timing belt replacement on the 2UZ-FE engine is a pretty simple and cheap repair. Most timing belt kits come with water pumps (which we’ll be discussing next). It’s always a good idea to replace the water pump along with the timing belt. These kits for the Toyota 2UZ FE run around $150-400.

It shouldn’t be more than a few hours of labor, but that can add another $200-400 onto the bill. Those confident in their DIY skills should find 4.7L V8 timing belt repairs to be pretty straight-forward.

As with the timing belt – water pumps usually aren’t a common problem with the 2UZ-FE engine. Rather, it may be considered part of standard maintenance. Plenty of engines require water pump replacement at some point in their lives. The Toyota 4.7L V8 water pump is pretty cheap, and easy to change while the timing belt is replaced.

Anyways, it’s also not uncommon for the 2UZ-FE water pump to begin leaking coolant slowly. In cases of minor leaks it’s not really an urgent repair. Regardless, you’ll still want to replace the water pump sooner than later.

There is also the possibility of the water pump seizing, which can then cause problems with the Toyota 2UZ-FE timing belt. That’s part of the reason most recommend replacing the two items together. Again, water pumps aren’t a major concern on the 4.7L V8 Toyota engine. At the same time problems may appear less common since many replace them preventatively alongside the belt.

Look for the following symptoms that may indicate an issue with the 2UZ FE water pump:

The most common problem with the water pumps is a simple leak. In this case you’ll likely notice a visible leak on the ground if parked for a while. Once the water pump fails the leak may become worse and coolant loss becomes noticeable. Lastly, overheating is possible if there isn’t proper coolant flow through the engine.

Water pumps are driven by the timing belt on the 2UZ engine. It’s in the same area, which is why they’re good items to replace together. A water pump alone is only about $100-200. Labor can be more expensive than the cost of the part.

We would hate to see or hear about cases where the belt is replaced and then you’re double paying for labor 10k miles later if the pump fails. In other words – if we didn’t already make it clear – just replace the pump and belt together.

Is the Toyota 2UZ-FE 4.7 V8 engine reliable? Yes, we believe the engine earns above average remarks for reliability. Given its use in trucks and SUV’s, Toyota built the 2UZ-FE to be a reliable and durable engine. The only issue we would call a true common problem is the exhaust manifold cracking. It’s not all on Toyota since the design was in part due to emissions standards.

However, there’s one big consideration for the 2UZ-FE engine. Many are close to 20 years old and even the newest examples are 10+ years old. As such, many 4.7L V8 engines from Toyota are probably getting up there in mileage. Age can also be just as hard on an engine. Point is – age and mileage are big factors for the Toyota 2UZ-FE.

Maintenance is also a big factor. Use quality oils, change fluids on time, and stay on top of other maintenance like timing belts. Do all of this and the Toyota 2UZ-FE engine offers excellent reliability. It’s not rare to see these engines make it to 250,000+ miles with very few or no major problems along the way. Pretty good longevity for the 2UZ FE.

2UZ-FE 4.7 V8 engines made their debut in 1998 and lived on all the way through 2011. It’s a great engine that offers a respectable balance of performance, longevity, and reliability. Fuel economy definitely isn’t a strength of the Toyota V8, though. Additionally, no engine is perfect and that also applies here.

Exhaust manifolds cracking is the main issue with the Toyota 2UZ-FE. Look out for these problems to develop on most, but the earlier models seem more prone to the manifolds cracking. Otherwise, timing belt replacement is an important maintenance item since it’s an interference engine. Water pumps can develop leaks, too. It’s a simple item to replace alongside the timing belt.

All in all, the Toyota 2UZ-FE 4.7L engine offers excellent reliability. It’s a strong design that’s built to last. Stay on top of maintenance and chances are the 2UZ-FE will reward you with a long, reliable, and enjoyable life.

What’s your experience with the 2UZ-FE engine? Drop a comment and let us know!