The Toyota 2AR-FE is a 2.5L inline-4 engine first released in 2008. It’s an engine option in the Toyota Camry and RAV4 even to this day. 2AR-FE engines offer 169 to 180hp. It’s not a lot of power by modern standards, but it’s enough for the purpose the engine serves. The 2AR-FE is a smooth, reliable, and efficient engine to safely get you from point A to B. It’s a great engine, but no engine is perfect. Though, we must admit the Toyota 2AR-FE is pretty close when it comes to reliability. In this article, we discuss a few of the most common Toyota 2AR-FE engine problems and overall reliability. 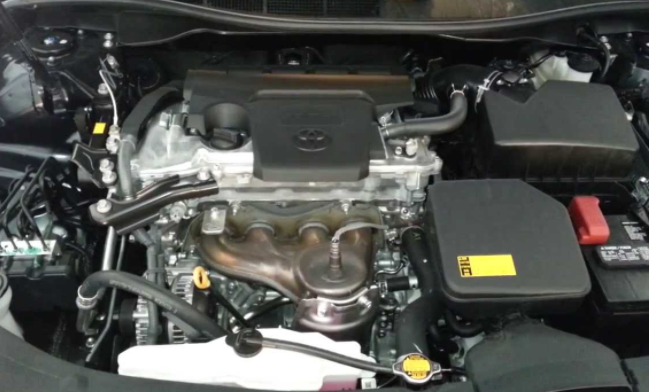 We’ll keep this pretty short as there isn’t too much to dive in. The 2AR-FE does use plenty of modern tech, but it’s not an insane engine. Again, it’s really built to be a safe, reliable engine to go from point A to point B. Below are a few specs for the 2AR-FE:

The Toyota 2AR-FE is in the following models:

A few of the most common issues and failures on the 2.5L 2AR-FE engine include:

Below we will discuss each of these problems in-depth. However, let’s add a few quick notes before jumping in. First off, the Toyota 2AR-FE is a highly reliable engine. These faults we’re discussing are in no way actually common in the sense they affect a large number of engines. Rather, when problems do occur these are a few of the common areas. That said, the 2AR-FE 2.5L engine may run into other minor issues we’re not discussing in this article.

Water pump problems are something many engines run into, so the 2AR-FE isn’t alone here. There are a few ways in which the Toyota 2.5L water pump may fail. One of the more common reasons is due to the water pump leaking coolant. However, the 2AR-FE pumps do occasionally fail internally and lose the ability to flow enough coolant through the engine.

The latter is the more concerning of the failures since the engine can quickly overheat without proper coolant flow. Again, this isn’t a truly common problem that affects a lot of 2AR-FE engines. However, it’s important to beware if your water pump does fail. You’ll want to pull over in a safe location quickly and avoid running the engine until the water pump is fixed.

Driving with an overheating engine may cause further damage to the Toyota 2AR-FE cylinder head. It’s not something that happens often, but it’s very possible if you continue driving while overheating.

A few symptoms that indicate water pump failures on the 2.5L inline-4 Toyota engine include:

Usually the Toyota 2AR-FE water pumps simply fail due to small leaks. This will leave a visible puddle of coolant under the engine after sitting for longer periods. If the pump actually fails internally then the engine will quickly begin to overheat. It’s not unusual for coolant to begin boiling and spill out of the coolant tank. You’ll also notice the Toyota Camry or RAV4 throwing a check engine light. If you continue driving you’ll likely receive an indication the engine is overheating and it’s important to pull over as soon as it’s safe.

Fortunately, a water pump issue is normal a minor issue in the grand scheme. This isn’t true for every car as BMW’s can often cost $1,000+ to replace the water pump. However, we’re talking about Toyota here. Expect to shell out roughly $100-200 for parts and labor can come in around $200-400. It’s not an overly challenging DIY so those willing to spend a day in the garage can save a bit of money.

We normally try to target actual engine problems in this articles, but there’s just not much to discuss with the Toyota 2AR-FE. However, the transmission is a part of the drive-train so we’re including it. Once again, we feel it’s necessary to re-iterate this. Transmission problems aren’t truly common on the 2AR-FE. We keep repeating ourselves on that point since it’s without question one of the most reliable engines we’ve written about.

Anyways, some Toyota 2AR-FE Camry and RAV4 owners are running into problems with the transmission. It seems to mostly be an issue on 2010-2016 Camry models. However, it may also affect newer models but they’re simply too new and low mileage to tell. Additionally, some 2AR-FE transmission problems may be caused by poor maintenance. It’s important to change the transmission fluid on time.

Failure of the torque converter is usually the ultimate cause of the transmission flaws. You may notice the transmission slipping, shifting rough, hesitating acceleration, or not going into reverse. Proper maintenance is key to limiting the risk of transmission failures on the Toyota 2AR-FE models. Allow the transmission time to warm up and ensure the fluids are fresh and topped off.

Look out for the following symptoms that may indicate there’s an issue with the auto trans:

The 2AR-FE transmission will normally start shifting rough or jerky when problems begin. In some cases, you may have issues getting reverse to engage. If the transmission is slipping you’ll notice the RPM’s going too high for the given speed and gear. Additionally, the 2AR-FE will likely hesitate and struggle while accelerating.

Transmission problems aren’t cheap. Normally you’ll need the transmission to be re-built or replaced all together. However, it does seem some issues were fixed with Engine Control software updates. Otherwise, a transmission re-build or replacement on the 2AR-FE engine can quickly exceed $1,000. Problems are few and far between so this shouldn’t scare anyone away. Just ensure the transmission is operating well if you’re planning to buy a 2AR-FE Toyota Camry or RAV4.

We’ll be fairly quick on this section. Knocking sounds on the Toyota 2AR-FE engine are hardly worth the mention. However, it can be annoying or concerning as knock can indicate serious problems. In the case of the 2AR-FE 2.5L engine it’s a minor issue and causes no known harm to reliability or longevity.

Some owners get some knocking sounds from the engine after starting. This mostly happens on a cold start and the knocking sounds go away after a few seconds or a minute. The problem boils down to an issue with the 2AR-FE VVT (variable valve timing) gears. Toyota issued a service bulletin, which can be found here.

We think it’s a good idea to check it out and replace the VVT gear if you’re having knocking or other problems from it. However, there don’t seem to be any serious reliability or longevity concerns even with the VVT problems present. As such, some may choose to take the small risk and live with the knocking sounds.

Really the only symptom to discuss is the brief knocking/rattling sound during a cold start. The fix involves replacing the VVT gears on the 2AR-FE engine. Parts are cheap but it can be a fairly labor intensive job so labor costs can add up a bit. We recommend leaving this repair to knowledgeable mechanics or DIY’ers.

Is the Toyota 2AR-FE a reliable engine? Yes, yes, and yes. The 2.5L 2AR-FE is without question one of the most reliable engines we’ve written about – and we’ve written about a lot of engines. There aren’t any major problems that are truly common and affect a large number of engines. It’s a truly well built engine that’s meant to safely and reliably get you from A to B. The 2AR-FE is pretty good at its job.

Of course, a lot of reliability comes down to how well you maintain the Toyota 2AR-FE engine. Stick with high quality oils and change it on time or sooner than the manufacturer recommendation. Transmissions problems can and do happen on the 2AR-FE so ensure you’re changing the fluid on time and have it topped off. When problem do pop up have them fixed in a timely manner. It’s all pretty basic stuff that goes a long way.

Some reliability comes down to luck of the draw, and unfortunately we can’t control that aspect. Nonetheless, a majority of well maintained Toyota 2AR-FE engines shouldn’t have any problems making it past 200,000 miles without any major failures.

Specs for the 2AR-FE engine might now WOW you on paper. It’s built to be a smooth, efficient, and reliable engine – not an all out performance machine. We believe the 2AR-FE engine is pretty darn good at its job. However, no engine is perfect and some 2.5L Toyota engines do occasionally run into problems.

When something goes wrong water pump failures are one of the more common areas. It’s usually a minor leak, but beware of sudden failure that can cause overheating. Transmission problems also can and do happen on the Toyota 2AR-FE. However, it’s pretty rare especially if you maintain the transmission well. Otherwise, the engine may make some annoying knocking sounds but it doesn’t seem to affect reliability or longevity.

Overall, the 2AR-FE 2.5L engine is one of the most reliable engines we’ve written about. If you’re simply looking for a solid engine and car to get you from A to B the 2AR-FE RAV4 and Camry are among the best out there.

What’s your experience with the 2AR-FE engine? Are you considering one?

Drop a comment and let us know! Or check out of 2GR-FE Common Problems article