The Toyota 1ZZ-FE 1.8L engine was introduced in 1998 and remained through 2008. It’s a basic NA 1.8L inline-4 engine that’s in many different Toyota models. 1ZZ-FE engines offer 120-140 horsepower, so it’s certainly not an impressive performance engine. However, the Toyota 1ZZ FE does offer a good balance of reliability and efficiency. No engine is perfect, though, and there aren’t any exceptions here. In this article, we discuss the most common Toyota 1ZZ-FE engine problems along with overall reliability. 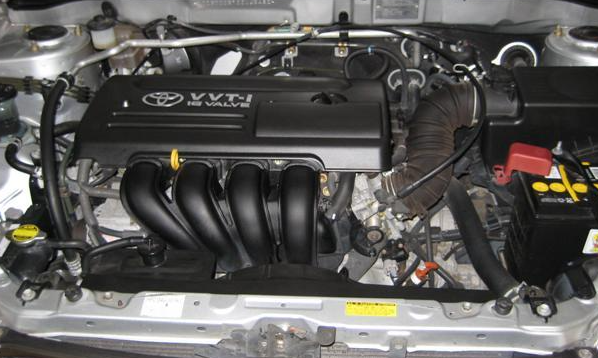 Toyota 1ZZ engines are in the following models:

These engines were built in the Buffalo, West Virginia and Cambridge, Ontario plants. Power comes in at 120-130hp and 122-126 lb-ft of torque. 1998 and 1999 versions of the 1ZZ-FE do not use variable valve timing. However, VVT-i was added on for engines produced after 1999.

Another variant of the Toyota 1.8L 1ZZ engine – the 1ZZ-FED – was built in Shimoyama. It’s in the following models:

1ZZ-FED engines offer 140hp and 127 lb-ft of torque. Increase in power is due to larger intake and exhaust valves. Otherwise, it shares the same base specs and design as the standard 1.8L engine.

A few of the most common problems on the Toyota 1ZZ-FE 1.8 inline-4 include:

We will discuss the above issues throughout the rest of this article. However, it’s important we clarify some details before moving along. We’re calling these the most common problems for a reason. It doesn’t always mean the problems are common in the true sense of the word common. Rather, when 1ZZ-FE engine problems occur these are a few of the most frequent areas.

That said, 1.8L inline-4 engines from Toyota do suffer from a fairly serious flaw with the oil consumption. Keep in mind – the internet can have a tendency to blow things out of proportion. Anyways, outside of oil consumption problems the 1ZZ-FE is a pretty solid and reliable engine. At the end of the article we’ll circle back to this point and discuss reliability. For now let’s examine the above flaws and issues in-depth.

Excess oil consumption is one of the more concerning problems with the 1ZZ-FE 1.8L engine. There are a few design flaws that combine to make oil consumption a serious issue. The main problem is the design of the pistons and piston rings. Toyota used a piston that’s too small and compensated by using larger rings. Over time, the piston rings wear down and begin allowing excess oil to pass by the rings.

Toyota did address these flaws and gave a 6 year, 100,000 mile warranty. They also fixed the issues on the 1ZZ engine in July 2005. As such, high oil consumption isn’t a common problem on 2006+ models. It can still happen, but it’s a lot less frequent and normally not due to the original design flaw.

Why is excess oil consumption a big problem? Good question. In some cases high oil consumption doesn’t have any serious effects on reliability or longevity of the Toyota 1ZZFE. If the rings wear down too much then cylinders start losing compression, which is a big issue. However, if oil consumption is the main problem then it’s simply important to keep an eye on oil levels. The 1.8L engine has a pretty small oil capacity and running it too low on oil can begin to cause extra wear.

Look for the following symptoms that may indicate an issue with the 1.8L engine burning too much oil:

Excess oil consumption is generally anything over 1 quart per 1,000 miles. As oil blows-by the piston rings it’s burned off in the cylinders of the inline-4 1ZZFE engine. This will typically produce white smoke from the exhaust if oil consumption is excessive. If these are the only symptoms then your 1ZZ-FE engine might still be OK for a while.

If you begin noticing power loss and/or poor overall operation then there may be a deeper issue. As piston rings wear the cylinder is no longer effectively sealed and compression is lost. This could be an indication it’s time to rebuild the 1.8L 1ZZ.

Internal issues usually aren’t cheap to fix. Parts can be expensive and it takes a lot of time and labor to replace anything. However, it’s actually not horrible on the Toyota 1.8L 1ZZ FE engines. Rebuild kits can range from about $500-1000, but labor is the real killer. The good news about rebuild kits is they typically address and replace a lot of other components. This can help ensure a reliable engine for the long-term. If you’re having all of this work done at a repair shop it can quickly add up to $1,500+, though.

Another option is installing a used engine or finding a rebuilt/upgraded engine. Depending on the specific 1ZZ-FE engine this can run about $800-3,000 then add labor on top of that. This certainly isn’t a cheap option, especially on cars that are about 13-22 years old.

It can be easy to confuse timing chain tensioner and valve cover gasket oil leaks. The latter is also a common issue with the age of these engines today. Gaskets, seals, and o-rings naturally wear down with time and mileage. Over time, they start developing cracks and leaking oil.

Anyways, back to the issue at hand. You’ll want to take a look at the engine block where you’ll notice some oil sludge. You can get a peek at the valve cover in a few areas to see if there’s any noticeable leaks from there. Otherwise, there’s a good chance it’s actually the timing chain tensioner that is leaking oil.

The following symptoms may point to timing chain tensioner oil leak problems on the 1ZZ-FE engine:

Of course, symptoms from an oil leak may be pretty obvious to some. If there are drops of oil under the car after it’s been parked for a while that’s usually a dead give-away. Otherwise, an oil leak may drip onto hot components and burn off before it hits the ground. This will result in burning oil smells and possibly light smoke from the engine bay.

Visually inspect the engine bay and block to see if you can track down the source of the leak. Valve cover gaskets and timing chain tensioners are likely the two most common leaks on the 1ZZ FE.

The below video gives a good idea of the specific details about the 1ZZ timing chain tensioner oil leak. You can also find a video on the channel about the actual repair. O-rings come in at less than $10, but you might consider replacing the full unit. That adds a bit of cost for parts. However, most confident DIY’ers will be able to knock out this job in less than an hour or two. Expect about $50-150 in labor at a repair shop.

We usually do our best to avoid talking about problems that were covered under a recall. However, there really aren’t too many other 1ZZ-FE engine problems to discuss. To diverge for a moment – we could sit here and discuss age related issues for a while. We just don’t think that’s totally fair since all 12+ year old engines are subject to standard wear and tear repairs.

Anyways, Toyota issued a recall for over 1 million 2005-2008 Corolla and Matrix models in the US and Canada. The Engine Control Module (ECM) is responsible for controlling the performance and operation of the engine. There are some defects that may cause a crack in the circuit board.

Since the ECM controls all sorts of engine operations it can be a serious problem. The engine might not start, could stall out, or simply perform poorly all around. As a recall, this shouldn’t be a concerning issue now days. Most 1ZZ FE 1.8L engines should have had this problem taken care of under the recall.

Is the Toyota 1ZZ-FE 1.8 inline-4 engine reliable? Relative to other Toyota engine we believe the 1ZZ earns average remarks for reliability. It would be a great overall engine if it weren’t for the piston ring and oil consumption problems. As such, 2006+ engines are likely above average reliability-wise since the piston ring problems were fixed.

A lot of reliability simply comes down to how well you maintain the 1ZZ FE engine. With the oil consumption issues it’s important to check oil levels often and top off as necessary. Use quality fluids, change them on time, and fix problems if or when they occur. Do all of this and the Toyota 1ZZ 1.8L engine can offer a reliable experience as an every day car.

It’s also important to note – not all pre-2006 engines suffer from oil consumption. There are plenty of these engines that make it to 150,000+ miles without any serious flaws or issues. Some of it just comes down to the luck of the draw.

The 1.8L 1ZZ engine from Toyota surely won’t impressive anyone with its power and performance. However, this engine was designed for use in basic point A to point B cars while delivering good reliability and fuel economy. It’s a solid engine that does its job pretty well but – as with all engines – the 1ZZ-FE isn’t perfect.

Excessive oil consumption due to piston and piston ring design flaws is definitely the biggest concern with the Toyota 1.8 inline-4 engine. It’s a very real problem, but we tend to believe the internet has a tendency to blow things out of proportion. Nonetheless, it was a big enough issue for Toyota to address with a longer warranty and updates.

Otherwise, these engines are only getting older so some standard wear and tear repairs will pop up from time to time. Oil leaks from the timing chain tensioner and valve cover gasket are fairly common with their age. Toyota did also recall some 05-08 models due to ECM issues. Most importantly – ensure you look for a clean engine and continue maintaining it well. With proper maintenance the 1ZZ-FE can deliver great reliability and a long life.

What’s your experience with the 1ZZ FE engine? Are you considering one?