The Subaru FB25 engine was introduced in the 2011 Subaru Forester. It’s also in the Legacy, Outback, and Crosstrek models in North America. The FB25 is a 2.5L flat-4 engine delivers 170-182 horsepower and 174-176 lb-ft. It may not offer incredible performance, but its plenty for most. FB25 2.5 engines also offer a good balance of reliability and fuel economy. However, no engine is perfect and that applies here. In this guide, we discuss Subaru FB25 engine specs, problems, reliability, and more. 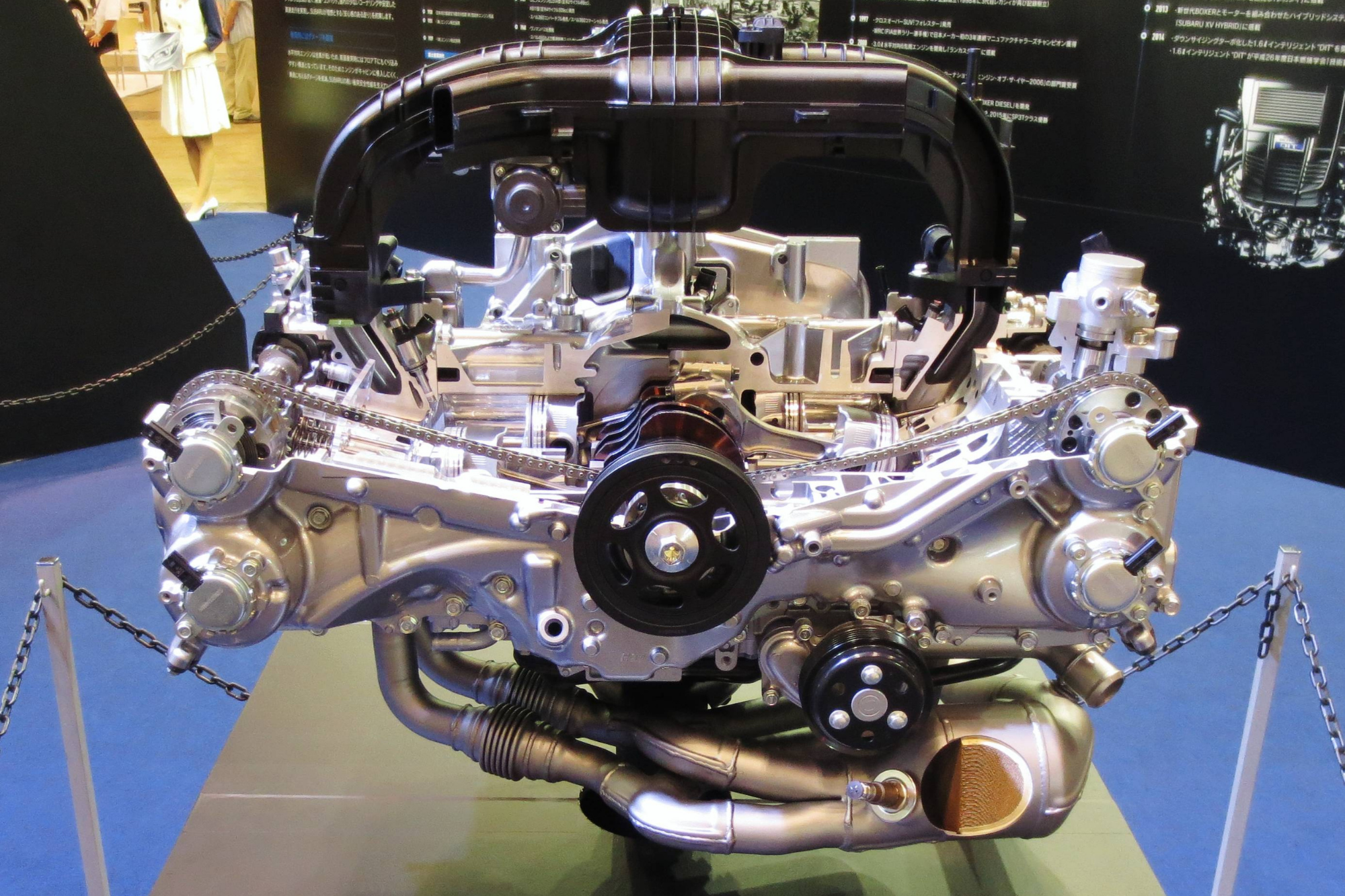 2.5L Subaru engines in the FB engine family are in the following years and models:

This engine is unique to the North American market. As such, these models in other markets do not receive the same FB25 2.5L flat-4 engine. There are also two variants of the engine with the newest FB25D making its way into the Forester in 2019. It then completely replaced the original FB25B in 2020 for all models. More on this following engine specs for the 2.5 engine.

Unlike many other Subaru engines the FB25 does not use a turbocharger. It’s a naturally aspirated 2.5L flat-4 boxer engine. The displacement is achieved with an over-square design with a 94mm x 90mm bore x stroke. An aluminum head and block help keep the 2.5L boxer engines weight down.

Direct injection has many benefits, and we’re huge fans of the technology. Injecting fuel directly into the cylinders allows for better performance, fuel economy, and emissions. It’s a win win from just about every aspect.

However, the FB25D direct injection engine does have one potential problem – carbon build-up. We’ll discuss this as a “common problem” below, so we won’t spoil anything yet. The main point here is that Subaru moved to direct injection with the FB25D engine, which also allows the higher 12.0:1 compression ratio.

A few of the most common problems with the FB25B and FB25D flat-4 engine include:

In the rest of this article we address the above Subaru FB25 engine problems in-depth. A few quick notes before proceeding, though. We’re classifying these as the most common, but it doesn’t mean they affect a large percent of engines. We’re simply stating these are some of the most common area when issues do occur.

So far, the FB25 is looking to be a reliable engine. Again, no engine is perfect so don’t let the few possible issues scare you away. Anyways, at the end of the article we come back around to the Subaru FB25 reliability topic.

First up is an issue unique to the direct injection (DI) FA25D engine in 2019-2020+ models. It’s a topic that comes up often for DI engines. Engines produce some oil blow-by that makes its way onto intake ports and valves. Traditional port fuel injection sprays fuel into these intakes ports. Detergents then wipe away any oil deposits.

Direct injection doesn’t have that same benefit. Fuel is sprayed directly into the cylinders, so there is no fuel flow to clean intake valves. Over time, carbon deposits form on FB25 intake valves. Yes, it is true modern engines are better at managing blow-by into the intake valves. However, without fuel flowing over them it’s impossible to completely eliminate carbon build-up.

It’s likely many Subaru FB25D engines will go their whole lives without addressing this problem. It usually doesn’t pose any major threats to engine longevity. Although, we highly recommend cleaning the intake valves every 100,000 to 120,000 miles. Excess carbon deposits can cause significant power loss and other drivability problems.

Possible symptoms of excess carbon build-up on the FB25D engine include:

As carbon deposits form they begin restricting air-flow into the cylinders. This can cause engine misfires, which then often lead to stumbling and rough idle. These symptoms usually begin once carbon build-up becomes pretty severe on the FB25 engine.

One of the biggest symptoms and concerns with carbon deposits is loss of power. It’s a really hard symptom to notice, though. Carbon build-up forms over the course of tens and tens of thousands of miles. As such, power loss is gradual rather than something you’ll notice immediately.

One of the best ways to clean Subaru 2.5L flat-4 carbon deposits is walnut blasting. It’s a process many use since it’s very effective at cleaning valves and ports. Walnut blasting uses walnut media shells and a heavy-duty vac. The media shells are then blasted into the intake ports to knock off any deposits.

There are some other methods that are effective, but more intensive and time consuming. Of course, accessing intake valves means pulling the manifold so it’s usually at least 2-4 hours of labor. Expect about $350-600 for walnut blasting or similar services.

Oil consumption is never an easy topic to write about. It’s always a bit vague since plenty of engines burn oil at excessive rates, but don’t experience any longevity or reliability issues due to it. With the FB25 there are some estimates that high oil consumption affects about 4-7% of these engines. It also appears most common with the 6MT.

Subaru is aware of the FB25 oil consumption problems and addresses it in a couple ways. First, they were replacing piston rings or entire pistons. It didn’t seem very effective. As such, Subaru began actually replacing short-blocks to fix the issue. It seems to work for some, but doesn’t work for others.

Ultimately, this issue may simply boil down to QC. Piston and piston ring clearances can vary, and some may simply be too far off and allow excess oil past the piston rings. There isn’t really any solid evidence or proof as to what exactly causes FB25 Forester, Legacy, and Outback oil consumption. It’s something to consider and keep an eye on, though.

Whether or not it affects engine longevity is also up in the air. That said, if your FB25 engine consumes excess oil it’s important to keep an eye on oil levels. Running the engine on low oil can have negative impacts on long-term reliability and longevity.

Symptoms of excess oil consumption are generally pretty simple. Often, the consumption itself is the only symptom. Nonetheless, look out for the following signs the FB25 is excessively consuming oil:

What exactly classifies high oil consumption can be debated, too. Many manufacturers – including Subaru – state up to 1 quart per 1,000 miles is within tolerance. If you’re somewhere in that ballpark it’s definitely a considerable amount of oil loss. Around 0.75 quarts per 1,000 miles is where we would start looking further into the FB25 issue.

As oil makes it past piston rings it burns in the combustion chamber. This may cause smoke from the exhaust and/or burning oil smells. They’re not totally common symptoms of Subaru FB25 oil consumption, however.

Owners with excess oil consumption should check with a local Subaru dealer. This is an issue they’re aware of, and can help determine the best steps to take. Piston ring or short-block replacement may be necessary.

There are some other ways to potentially mitigate FB25 oil consumption. Try different oil weights or brands of oil (ensure it’s within manufacturer spec). Avoid excessive idling and keep throttle input and RPM’s modest until the engine is warm. Clearances tend to become smaller on a warm engine since metals expand with heat, which allows less room for oil to make it by.

Last up for common Subaru FB25 engine problems is cam carrier seal oil leaks. You can find the TSB from Subaru here. It applies to the 2012-2019 Forester, Impreza, and 2015-2019 WRX. Whether or not this is still an issue on the newest FB25D engine is up in the air. The engine is simply too new to tell.

It is a pretty common problem on many of the earlier Subaru FB25 engines, though. Cam carrier seal leaks are also very expensive. Some people even get quotes of $3,000+ to fix the oil leak. Fortunately, it’s not absolutely required to repair until it becomes a pretty serious oil leak. Don’t want too long, though. Due to the TSB Subaru make work with owners to lower repair bills, but it all depends on the age and mileage.

Cam carrier seals are not the only oil leak on FB25 engines. If you check the service bulletin you’ll also notice mention of the timing chain cover, cam cap, and upper oil pan. Another oil leak that’s common on many engines above 100,000 miles is the valve cover gaskets.

Symptoms are pretty standard as with any oil leak on the FB25 engine. Look for the following signs the cam carrier is leaking:

A visible leak is a dead-give away that oil is leaking somewhere. Be cautious with the cam carrier seal leak on the FB25. It can often be confused with other possible leaks – such as valve cover gaskets. A small leak can often be hard to notice visibly.

It’s possible for engine oil to drip onto hot parts and burn off. This can produce light smoke from the engine bay or burning oil smells.

The cam carrier seal fix is very labor intensive. Earlier we stated some receive quotes of $3,000+ for this repair. It’s a little excessive, but $1,000+ is very standard. As with most oil leaks the actual parts and repairs are inexpensive. The FB25 labor to access cam carrier seals is just expensive and lengthy.

Again, this is under a TSB from Subaru. If you’re over 100,000 miles and well out of warranty they likely won’t offer much help, if any. However, if your car is on the newer side and lower mileage they may offer discounted repairs or cover it even outside warranty periods.

Is the Subaru FB25 2.5L boxer engine reliable? Yes, we believe this engine earns average remarks for reliability. You could even make a strong argument for slightly above average reliability. However, the costly cam carrier seal oil leaks and possible oil consumption problems bring the FB25 reliability down a bit.

Fortunately, oil consumption seems to only affect roughly 5% of engines. Subaru also has a TSB to address these problems with new rings or short-blocks if oil consumption is that severe. We won’t hold carbon build-up against the FB25. Many modern engines use DI and it’s truly awesome technology. Carbon build-up is simply a small drawback.

A lot of Subaru FB25 reliability simply comes down to maintenance and luck of the draw. All engines have the few bad apples, and we just can’t control that aspect. However, good maintenance is an easy way to increase the likelihood of having a reliable experience with the flat-4 boxer engine.

What’s your experience with the Subaru FB25 engine? Are you considering one?

Or check out our FA20 common problems article