The Subaru EZ36 is a 3.6L flat-6 engine that made its debut in 2007. Its DOHC 24 valve design offers 256 horsepower and 247 lb-ft of torque. Subaru 3.6 engines are well known for their use in the 2010-2019 Legacy and Outback models. Overall, the EZ36D boxer engine has a lot to offer but no engine is perfect. In this guide, we discuss Subaru EZ36 3.6L engine problems along with specs, reliability, and more. 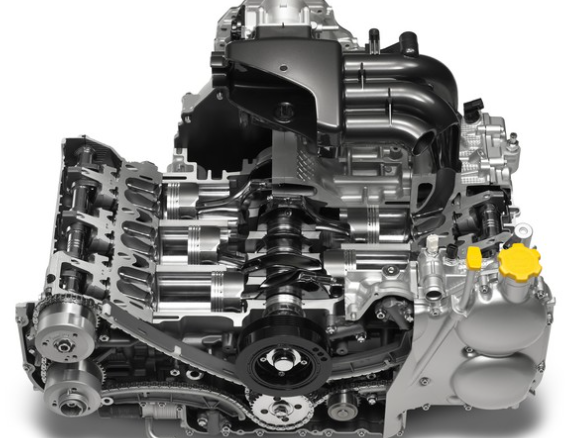 EZ36D engines are in the following models:

Below is a list of some specs for the 3.6L flat-6 engine:

Aside from its uncommon flat-6 engine design the EZ36 specs are pretty standard. Displacement comes in just over 3.6 liters and the engine is naturally aspirated (NA). An aluminum head and block design help keep weight down. The EZ36 engines DOHC, 24 valve design helps improve power and torque.

Its slightly oversquare with a bore that’s 1mm wider than the length of the stroke. 10.5:1 compression is fairly high, but normal for a NA engine. All of these specs allow the Subaru EZ36 engine to make 256 horsepower and 247 lb-ft. Nothing too incredible but it’s more than enough power for most.

A few of the most common problems with the Subaru EZ36 3.6L flat-6 engine include:

We’ll discuss these Subaru EZ36 3.6 flat-6 problems throughout this article. Though, it’s important to add some notes before moving onto these issues. We’re classifying these problems among the most common for good reason. It doesn’t always mean the failures are common in the true sense of the definition. Rather, when problems arise these are a few of the most common areas they develop.

That said, the EZ36 engine offers solid overall reliability. It’s definitely an improvement over the older, original EZ30 engines from Subaru. Anyways, we’ll circle back to the reliability topic at the end of the article. For now, let’s jump in and discuss the above 3 most common Subaru EZ36 engine problems.

The Subaru EZ engines have a lot of potential locations for oil leaks to develop. It uses a lot of seals & gaskets which leaves a lot of room for leaks. All engines are prone to oil leaks as they accrue age and mileage. That rule applies to the EZ36 flat-6 boxer engine, too. As such, oil leaks are common on older Subaru 3.6L engines.

With age gaskets and seals simply degrade. They become brittle, start cracking, and oil begins leaking. These leaks usually start slowly, but can become large leaks if not fixed in a timely manner. On the EZ36 engine there is a massive front timing chain cover. The engine also uses a 2-piece design for the oil pan gasket. Point is – there are a lot of large areas for oil to leak from the 3.6L boxer engine.

Look for most oil leaks to develop after 8+ years and 100,000+ miles. Leaks can and do happen sooner, but it’s usually an age and mileage related issue. A few common areas for EZ36 oil leaks are the timing chain cover, valve cover, oil pan gaskets, and crank seals.

Symptoms of oil leaks are usually pretty obvious and straight-forward. Nonetheless, look for the following signs that may indicate your Subaru EZ36 3.6L engine is leaking oil:

Visible oil leaks are the most common symptom and a dead giveaway the EZ36 is leaking oil. However, many leaks start small and may not drip onto the ground for a while. Therefore, some oil leaks may go unnoticed without a visual inspection. Additionally, some oil leaks drip onto hot components and burn off. Burning oil smells or light smoke from the engine bay may indicate a leak.

Otherwise, low engine oil is a potential symptom but it’s pretty unlikely. Chances are you’ll notice a visible leak and drops on the ground before your oil runs low from an oil leak alone. Engines do consume some oil naturally, so low oil doesn’t necessarily mean there is a leak.

Oil leak fixes on the EZ36 boxer engine can vary quite a bit depending on the specific leak. Most oil leaks stem from cheap $10-50 gaskets and seals, though. This makes Subaru 3.6 flat-6 oil leaks a cheap fix for the DIY crowd.

Labor costs can be the real killer of oil leaks. Many Subaru EZ oil leaks can be knocked out in a few hours of labor so expect about $200-400. However, a few of the more complex oil leaks can add more repair costs at a shop.

Over time, the spring within the tensioner wears down and can cause a few possible issues. For one, the spring may wear down and not be apply to apply enough pressure for proper belt tension. Another problem is that the EZ36 belt tensioner spring may “bounce” around under engine load. Then there’s the bearing on the pulley that can seize and cause problems.

Point is – there are a number of ways for the Subaru EZ36 serpentine belt tensioner to fail. Many issues are age related as the tensioner/pulley simply takes abuse with age and mileage. Belts and pulleys are standard maintenance on many cars, so it’s not a major issue in the grand scheme.

A few symptoms of belt tensioner problems on the EZ36D flat-6 3.6L engine include:

Before a serpentine belt fails there aren’t always highly noticeable symptoms. Squeaking or grinding-like noises from the engine may indicate an issue with the EZ36 belt or tensioner. Otherwise, most other symptoms occur after the belt actually fails. If you’re noticing issues with the A/C or other belt driven accessories then its time to check the belt and tensioner.

Water pumps are driven by the belt, so improper function can lead to overheating. A complete belt failure will likely render the EZ36 3.6 engine undrivable. The alternator is run by the belt which would cause a no-start scenario.

Replacing the belt tensioner on the EZ36 is a fairly minor job. It’s usually a good idea to replace the whole tensioner and belt together, especially on high mileage Outback and Legacy models. The serpentine belt and tensioner kit will run about $100-150 in parts. Add in another $150-250 in labor and the job comes out in the $250-400 price range.

Much like the serpentine belt tensioner the timing chain tensioner is responsible for keeping tension. Simply on the timing chain rather than the accessory belt. Anyways, this plastic tensioner has a tendency to wear down with age and mileage. Eventually, it cannot keep proper tension on the Subaru 3.6L flat-6 timing chain.

Timing chain tensioner issues are less common on the EZ36D when compared to the EZ30 engine. Problems can and do occur, though. It’s important to look for symptoms. The sooner the tensioner is caught the less likely the need to replace the timing chain or other parts.

Look for the following symptoms that may point to Subaru EZ36 timing chain tensioner problems:

Otherwise, if the tensioner fails enough the belt can slip or jump a few teeth. In this case, the EZ36 will throw a check engine light and exhibit poor overall operation.

Again, issues with the Subaru EZ36 timing chain itself are rare. However, if the tensioner begins failing then timing chain replacement may be needed. Timing chain kits can run about $200-400 for parts alone. Labor can also be pretty involving, so another $300+ for labor is standard.

It makes for a fairly expensive repair when all is said and done. Fortunately, timing chain tensioner problems don’t happen often on the Subaru Outback or Legacy 3.6 flat-6 engine.

Is the Subaru EZ36 flat-6 engine reliable? Yes, we believe the EZ36 earns average to above average marks for reliability. The engine doesn’t have any serious design flaws or issues. Still, no engine is perfect and that also applies to the 3.6L flat-6 Subaru engine.

The design of the EZ36 allows a lot of room for potential oil leaks. It’s standard stuff that all engines are prone to with age and mileage. However, the area of the 3.6 engine that requires sealing means leaks are even more likely. Otherwise, the serpentine belt tensioner is a common trouble area but it’s a minor issue in the grand scheme. Last are the timing chain tensioners, but they’re a pretty uncommon issue on the EZ36.

Of course, a lot of Subaru EZ36 reliability comes down to maintenance. Use high quality oils, change fluids on time, and fix problems if and when they happen. It’s all basic stuff that should be done with any engine. Do all of this on the EZ36 3.6 flat-6, though, and chances are it will live a long and reliable life. With proper maintenance the engine shouldn’t have any issues surviving beyond 200,000 miles.

EZ36 engines made their debut in the 2008 Tribeca. It then made its way into the 2010-2019 Subaru Outback and Legacy models. The 3.6 liter flat-6 boxer engine offers 256 horsepower and 247 lb-ft of torque. Respectable numbers for its natural aspiration design. Besides its unique flat-6 nature the EZ36 specs are pretty standard for a 6-cylinder engine.

Common problems include oil leaks and serpentine belt tensioners. None of these are true design flaws, but issues and maintenance that many engines run into as they age. Timing chain tensioner problems happen; though, they’re pretty rare.

All in all, the Subaru EZ36 has plenty to offer for most. The engine might not be eye-catching compared to some other Subaru boxer engines. However, it has a good balance of performance, reliability, and longevity. EZ36 flat-6 engines can live very long and reliable lives with proper maintenance.

What’s your experience with the Subaru EZ36 engine? Are you considering one?