The Nissan VQ40DE is a 4.0L V6 engine that made its debut in the 2005 Frontier, Xterra, and Pathfinder. It offers a solid 261-275 horsepower and 281-288 lb-ft of torque. VQ40 engines also offer a good balance of reliability and fuel economy. Although, no engine is perfect and that applies to the Nissan 4.0 engine too. In this guide, we discuss a few common Nissan VQ40DE engine problems along with reliability, specs, and more. 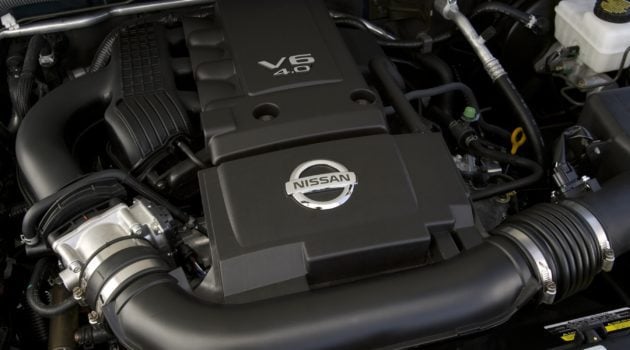 Nissan VQ40 4.0L engines are in the following year and model vehicles:

In the US, the engine is best known for its use in the Nissan Frontier, Xterra, and Pathfinder. NV full-size vans also use the VQ40DE engine.

Below is a breakdown on the VQ40DE engine code:

Engine specs for the Nissan VQ40DE 4.0 engine are as follows:

These are fairly normal specs for a modern V6 engine. Though, the 4.0L displacement is pretty big for a V6 engine. Anyways, the VQ40 uses an aluminum design to keep weight low while the DOHC helps power and performance.

Most models, including the VQ40DE 4.0L Nissan Frontier, Pathfinder and Xterra, offer 261 horsepower. It may not be much for a large 4.0 V6 engine by modern standards. However, it’s still respectable output especially considering the engines release back in 2005.

A few of the most common problems on the Nissan VQ40DE 4.0 V6 engine include:

We will address these VQ40 reliability issues throughout the rest of this article. It’s a good time to add some quick notes before moving on, though. We’re considering these the most common problems for good reason. It doesn’t necessarily mean they’re common in the true sense of the definition. Instead, when VQ40DE problems arise these are a few common areas.

Overall, the Nissan 4.0 V6 offers solid reliability. Quite a number of these engines make it well beyond 200,000 miles with few to no major issues. However, the engine does date back to 2005 and older, high mileage engines are prone to their share of problems. We will discuss VQ40DE reliability in greater depth at the end of this article. For now, let’s examine the above issues with the 4.0L Nissan engine.

Well, this isn’t the first time we’re writing about timing chain problems on Nissan engines so the VQ40DE isn’t alone here. Around 2011 Nissan did address the timing chain problems. A new upper timing chain design and beefier tensioner significantly reduce the chance of this issue occurring. As such, this issue primarily affects the 2005-2010 4.0L Frontier, Pathfinder, and Xterra.

Timing chain and tensioner replacement isn’t cheap on the Nissan VQ40DE. It’s not a fun problem to run into. Check to see if the repair has been done if you’re in the market for an 05-10 4.0L V6 Nissan model. Problems seem most common around 80,000 to 120,000 miles. However, some VQ40 timing chains do hold up well beyond that mark.

Whining or buzzing like sounds are the primary symptom of problems with the VQ40DE secondary timing chain. The sounds should increase frequency as engine RPM’s increase. If you’re noticing these symptoms it’s definitely time to check out the timing chain.

If the failure becomes worse you may start to notice more severe symptoms like misfires, rough idle, and poor engine operation. Avoid letting the issue go this far as serious problems may occur if the timing chain slips or jumps a few teeth.

Replacing the Nissan VQ40 timing chain and tensioner is the real killer. It’s a fairly labor intensive job, so repair bills can quickly add up to $1,000-1,500+. There is a TSB from Nissan addressing the timing chain issues here. Below is a video about timing chain replacement for the VQ40DE engine.

Alright. We were a bit back and forth as to whether or not to even discuss this issue. Numerous Nissan VQ40DE owners run into problems with low oil pressure, especially at idle. It’s a little complex because there are a few possible causes and none of them seem overly common. However, low oil pressure is common enough that it’s worth discussing. A quick search on clubfrontier.org yields over 450 results for “VQ40DE low oil pressure.”

One reason we came across often has to do with the gasket at the back of the rear timing cover. Low oil pressure also appears more common on earlier model VQ40 engine. In other words, this failure could somewhat tie into the timing chain and tensioner problems we just discussed.

Basically, what happens is the rear timing cover gasket leaks oil against the block. Some oil gets “stuck” there rather than re-circulating the Nissan 4.0 V6 engine. This ultimately causes low oil pressure that’s most noticeable at idle. However, the occasional oil pump and other issues do occur. It’s not just one flaw at hand that may cause low oil pressure, so don’t automatically assume it’s the rear timing cover gasket.

Again, the main symptom here is actually noticing low oil pressure. A manual test can confirm there is an actual oil pressure problem and not a gauge, electrical, etc problem. If oil pressure is severely low you may start noticing odd clunking, ticking, or knocking sounds. Low oil pressure on the VQ40DE – or any engine – is not a good thing. It can cause additional friction which creates these sounds along with overheating.

Oil leaks are common on many car engines, especially with higher age and mileage. Gaskets, seals, and other rubber components simply become brittle with age and begin cracking. A common oil leak on the Nissan VQ40DE engine is from the valve covers and/or valve cover gaskets.

Valve cover gaskets seal the gap between the 4.0L V6 cylinder head and valve covers. They’re subject to a lot of heat and the rubber valve cover gaskets wear down over time. Eventually they develop cracks and slowly begin leaking oil. It’s usually not an urgent repair, but leaks do become more severe as cracks continue to grow and new ones develop.

Look for valve cover gaskets to mostly be an issue after 8+ years and 100,000+ miles. Sooner failures may happen, but this is more of an age and mileage problem than any design flaw with the Nissan VQ40DE 4.0 engine. Other oil leaks to watch out for include the timing covers and main seals (among some other less common leaks).

Well, oil leak symptoms on the Nissan 4.0 V6 are usually pretty straight-forward. Look for the following symptoms that may indicate the VQ40 is leaking oil:

Visible oil leaks are the most frequent symptom of an oil leak on the Nissan VQ40DE. However, it’s not always noticeable since valve cover gasket oil leaks begin slowly. The gaskets also lie at the top of the engine, so oil may drip onto hot parts and burn off before hitting the ground. In this case you may notice light smoke from the engine bay or burning oil smells.

Valve cover gaskets are inexpensive as each of the two gaskets should be less than $20. However, sometimes it’s necessary to replace the entire valve covers which adds a bit more cost. It might be a good idea to replace the whole valve cover, especially if you’re at 120,000+ miles.

Anyways, labor isn’t too much for this job as the gaskets and covers lie at the top of the VQ40 engine. The driver side can be a bit harder, though. Expect this repair to come out in the $200-600 ballpark at a repair shop.

Is the Nissan VQ40DE 4.0L V6 engine reliable? Yes, we think the engine earns above average remarks for reliability. VQ40DE timing chains were a serious and expensive issue in the early days, but Nissan was quick to address the problems. Otherwise, there aren’t any major design flaws with the VQ 4.0L engine. A few age and mileage related issues are expected, but that’s standard with any car and engine.

A lot of VQ40DE reliability simply comes down to maintenance. Use quality oils, change fluids on time, and repair problems if or when they do occur. Some VQ40 reliability also comes down to luck of the draw. Every engine design has the random few engines that run into way more problems than the average.

Anyways, stay on top of maintenance and hope you have a little bit of luck on your side. It’s not uncommon to see the Nissan VQ40DE 4.0 V6 engine last well beyond 200,000 miles with few issues along the way. A number even hold up to the 350,000+ mile range. That’s pretty good longevity if you ask us.

The Nissan VQ40 engine made its debut in the 2005 Frontier, Xterra, and Pathfinder. It’s a stout 4.0L V6 engine that offers 261 horsepower in most models. Not great numbers by modern standards, but plenty of power for most. Combine that with good reliability and efficiency and the Nissan VQ40DE is a promising engine. Then again, it’s not perfect as with any engine.

Early VQ40DE 4.0 engines were prone to timing chain problems due to a poor secondary chain and tensioner design. Those issues were resolved by Nissan in 2011, so newer models are less prone. Otherwise, low oil pressure pops up often but it can have several different causes; none of which are too common by themselves.

Additionally, some Nissan 4.0 V6 engines are now over 15 years old and only aging more. Oil leaks and other age/mileage related issues become more likely on these older VQ40DE engines. Regardless, it’s a reliable engine that’s proven to hold up to 200,000 to 300,000+ miles.

What’s your experience with the Nissan VQ40DE engine? Leave a comment and let us know!