The Honda K24 engine is part of the popular K-series engines. Honda K engines are still in production today despite introduction back in 2001. It’s a long running engine that was tasked with replacing the wildly successful Honda B-series engines. Honda’s K24 is highly reliable, but is still prone to a few common issues we’ll cover in this article. 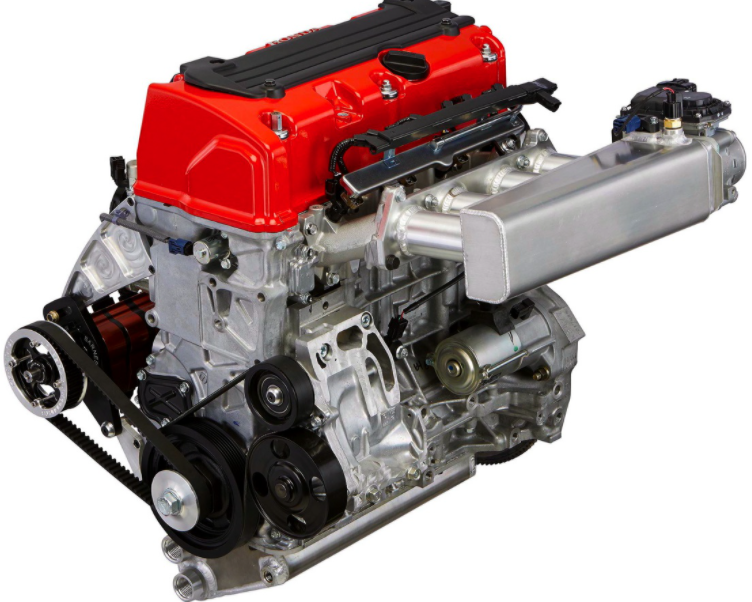 A few of the most popular problems with the K24 include:

We’ll write about each of these problems in-depth below. It’s a good time to note – simply because we’re classifying these issues as common does not mean every K24 will experience the problem. Also, the K24 engine is prone to other potential faults and failures just like any other engine.

Prior to diving into the problems we’ll lay out all of the different K24 engines.. The common problems we discuss affect many of the Honda K24 engines. However, certain variants may be more or less susceptible to the issues. Regardless, all of the K24 variants are reliable engines that should easily last 200,000+ miles.

The K24 encompasses the following engines:

As you can see – the Honda K24 has many variants. It makes sense given the engine has been in production since 2001. Many variations are due to emissions requirements. It’s also due to the wide range of Honda and Acura models that use the engine with different power goals for each. The K24 can be found in cars like the CR-V, Accord, Odyssey, Element, and Civic Si. It’s also found in several Acura models including the ILX, TSX, and TLX.

In the below sections we will detail each of the three common issues we outlined above. Again, these are issues shared among many engines within the K24 engine family. However, there are so many engines over such a long period it’s impossible to cover every single engine in one post.

The front crankshaft seal is also commonly known as the front main seal. On the Honda K24, the front crank seal is responsible for sealing the end of the crankshaft with the timing cover. It’s a pretty simple component in general. A front main seal literally just a seal designed to prevent oil from leaking out the front of the crankshaft. However, the rubber seal is known to wear down with age and mileage. If this problem pops up it’s likely to be in the range of 120,000+ miles. Some older K24’s with low mileage may leak sooner since age can be just as tough as mileage on seals.

A few symptoms with a K24 leaking front main seal include:

The first symptom is the most obvious. However, keep in mind – there are plenty of other seals and gaskets in an engine that may potentially leak. As such, a visible leak doesn’t always mean it’s the front main seal. If the K24 front main seal is leaking badly enough then you may notice you’re topping up on oil more than usual. Smoking or burning smells are less common with Honda K24 crankshaft seals. Often, the oil drips down before it can burn off.

Fortunately, Honda’s are generally fairly inexpensive to repair and the K24 front main seal is no exception. Depending on your specific K24 variant, the part is likely to run somewhere in the ballpark of $10-30. $10 barely even buys a McDonalds meal now days so that should be good news for the DIY crowd. It’s a very inexpensive repair. The job is straight-forward and can be accomplished by intermediate DIY’ers in a few hours.

However, we understand not everyone wants to DIY car repairs. The damage from a K24 leaking front seal still isn’t too bad. Some of the labor costs may depend upon your location and your year/model. Nonetheless, $200-400 is a reasonable ballpark for a replacement at a repair shop. Sounds fair to us. Then again, we come from the BMW world where nearly any oil leak is going to run $1,000+ for repairs. 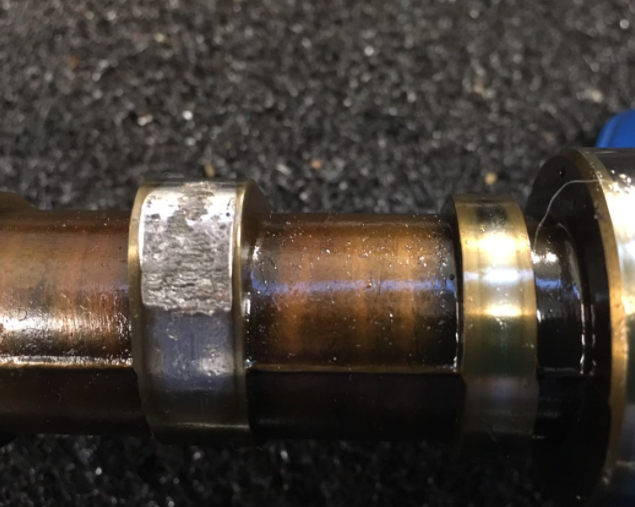 Camshafts, commonly referred to as cams, lie in the cylinder head and are responsible for opening and closing the intake and exhaust valves. Cam lobes control valve intake and exhaust valve lift. It’s hard to explain it well with words, so instead we’ll link to this video if you’re interested to learn more about cam lobes. Exhaust cam lobe galling is a fairly common and well documented issue on the K24. Galling is caused by excessive friction between the K24 cam lobes. It may cause material to actual weld or connect to the contact point where the excess friction occurs. It may also cause cracking or roughening of surfaces.

While this issue may affect any Honda K24 engine variant the problem seems to be most common on the K24A1 and K24A4. It can also be exacerbated by oil that’s too thin or poor oil in general. We may be stretching calling the exhaust camshaft galling a common problem. It can happen, however. We also thought it worth mentioning since it’s one of the more expensive fixes. Most won’t run into this issue, but if you do expect it to be north of 100,000 miles.

The main symptoms of K24 exhaust cam galling are:

The camshafts are within the cylinder head which is up-top just below the engine valve cover. If the problem is bad enough you’ll actually be able to hear the friction in the form of audible clicking or tapping sounds from the valve cover area. Also, if the galling and wear is bad enough it could cause power loss on the K24 engine. This occurs when the wear is bad enough that valve lift is affected.

Galling on the K24 exhaust cam lobes requires replacement of the exhaust camshaft. It’s also somewhat labor intensive to complete. The exhaust camshaft will run a couple hundred dollars. However, the DIY crowd may consider an upgrade if they’re in there working on the engine anyways. For example, these drop in intake and exhaust cams for the K24A2 may be a good choice. It’s a bit pricey but the performance benefits and higher quality might justify the price. Replacing the Honda K24 exhaust cam should be left to experienced or patient DIY’ers.

At a repair shop expect to pay somewhere in the ballpark of $800-1500 for a camshaft replacement. It’s on the pricey side, but really not too bad. Again, this problem isn’t extremely common and most K24 engines probably won’t run into it.

Prior to the K-series engines Honda mostly used timing belts. However, the K20 and K24 made the change to timing chains. The setup between timing chains is more or less the same. Of course, the difference being one uses a chain and the other uses a belt. Chains are typically more durable and require replacement less often. It’s not uncommon for a timing chain to not need replacement over the lifetime of a vehicle.

No K24 is exempt from timing chain tensioner problems. However, it seems to primarily be an issue on the earlier K24 engines. It’s also more common on K24’s with modified camshafts and valve springs.

Again, what happens when the tensioner fails is that the timing chain gains too much slack and fails to properly control valve timing. This can cause a handful of other problems on the K24. You’ll likely notice a rattling or rumbling noise when the chain develops too much slack. The check engine light may illuminate due to improper timing. That can also cause issues with starting the car or the K24 stalling.

Not to scare anyone since this isn’t likely. However, if left for too long it’s possible for internal damage to occur. If timing is off too much the intake and exhaust valves could actually come in contact with the pistons. That’s a recipe for disaster and in many cases likely necessitates complete engine replacement. It’s unlikely, but it can happen.

Depending on your specific year and model the components may run in the ballpark of $100-400. Some choose to replace the entire K24 timing chain while they’re in there. Others just replace the tensioner. Regardless, it’s a labor intensive job but not too challenging. Experienced DIY’ers will still find it a lengthy repair, but it should be fairly straight-forward. Those with less experience should have some patience as it may require a full weekend out in the garage.

At a repair shop this job could run into the ballpark of $700-1200. The dealership may even quote a bit more, so we recommend finding a good independent repair shop. By the books, this job will likely run in the ballpark of 6-10 hours to replace the timing chain and/or tensioner.

We’re adding this portion to be as transparent as possible when it comes to K24 reliability. Some of the problems above may only affect a small percentage of Honda K24 engines. In that regard, it may not always be fair to refer to them as common. That’s why we try to use terms like most common K24 problems. It would be impossible to say how many Honda’s actually experienced the failures.

We can say what we do know about K24 reliability, though. One, it’s a great engine overall that’s very reliable and shouldn’t have any issues reaching 200,000 – 300,000+ miles. Almost all engines will experience a problem or a few problems in that long of a lifespan. Engines use all sorts of wear and tear components that are susceptible to degrading with age and mileage. Some K24 reliability comes down to the luck of the draw. Some comes down to maintenance history and how you drive the car.

There are a lot of factors that go into reliability. K24 maintenance is one of the aspects you can control. Maintain your engine well and chances are the K24 will be relatively trouble free throughout it’s life. And it can live for a long time.

This may be a bit repetitive, but the K24 is truly an excellent, reliable engine. It spans a long period of time and is found in many different Honda and Acura models. The 3 most common problems include front main seal oil leaks, exhaust cam galling, and timing chain tensioner failure. Some K24 variants may be more or less susceptible to these problems. They’re also not necessarily common problems, but rather 3 of the more common issues on the K24.

Maintain your Honda K24 well and chances are it should be relatively trouble free for a 200,000+ mile lifespan. Overall, plan to potentially run into a few issues along the road especially as the engine ages. However, expect the K24 to be a reliable and fun engine for a long time.

What are your experiences with the K24? Which variant do you have?