The Ford 3.0 EcoBoost engine made its debut in the 2017 Lincoln MKZ. It’s mostly found in Lincoln models, but the 3.0L twin turbo V6 is also making its way into the Ford Explorer. The engine shares many traits with the smaller 2.7 EcoBoost, but offers quite a bit more power. We’re big fans of the EcoBoost engines and that’s true for the 3.0L variant too. However, no engine is perfect. In this article, we discuss Ford 3.0 EcoBoost engine problems, reliability, specs, and more. 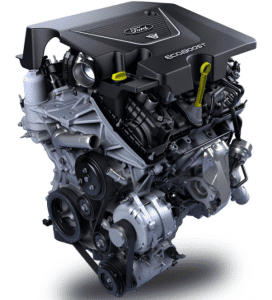 Ford 3.0L EcoBoost engines are in the following models:

Output for 2017-2020 Lincoln MKZ models with front-wheel drive is 350hp and 400lb-ft. That increases to 400 horsepower for AWD models including the Continental. Horsepower comes in at an impressive 400hp and 415 lb-ft for the Ford Explorer ST and Lincoln Aviator.

Lastly, with the Hybrid electric engines the 3.0 EcoBoost makes 494hp and 630 lb-ft in the Aviator. Pretty solid performance from the relatively small 3L engine. 400 horsepower actually matches that of the larger 3.5L EcoBoost in the 2021+ F-150. However, the 3.5 variant does have a large torque advantage.

*Max HP and TQ of 494 and 630 are only with added electric engines. 400 horsepower and 415 lb-ft is the maximum output without electric.

The Ford 3.0 EcoBoost specs are similar to the other V6 EcoBoost engines. It uses twin turbos for impressive performance along with an aluminum head and block to keep weight down. It’s also a DOHC engine with variable cam timing to further improve power and efficiency.

3.0L EcoBoost engines see a small bump in both bore and stroke to increase displacement from 2.7 to 3.0 liters. Compression is a little lower than the other V6 EB engines. Nonetheless, it’s all good for 350+ horsepower and 380+ lb-ft.

A few of the most common issues with Ford 3.0L twin turbo V6 EcoBoost engines include:

We will discuss the above 3.0 EcoBoost problems through the rest of this article. It’s important to add some quick notes first, though. We’re classifying these among the most common problems. The word most is there for good reason. We don’t mean these are common problems in the sense they affect a lot of Ford 3.0 EcoBoost engines. Instead, when things go wrong these are some of the most common areas.

That said, there are a few factors at play here. We like the reliability of the similar 2.7L and 3.5L EB engines, and suspect the 3.0 V6 will also deliver good reliability. However, these are still fairly new engines. Time will tell if there are any other possible reliability concerns. Anyways, we’ll circle back to Ford 3.0 reliability at the end of the article.

Engines naturally produce some oil blow-by. Oil then makes its way onto intake valves and ports. Traditional port injection sprays fuel into intake ports, and detergents wipe away any oil deposits. However, with the DI 3.0L EcoBoost the fuel sprays directly into the cylinder. There’s nothing to wipe away oil deposits, so it sticks to the intake valves and becomes carbon build-up.

There’s a reason engines like the 2.7 and 3.5 EcoBoost are using direct and port injection. For whatever reason, Ford opted to not use this same setup on the 3.0 EcoBoost, so it’s prone to this carbon build-up.

Carbon build-up usually doesn’t pose any major risks to reliability or longevity. However, it can affect performance so we think cleaning the intake valves is good maintenance every ~100,000 miles. Chances are many 3.0L V6 engines will live their whole lives without this, though.

Symptoms of carbon build-up on the 3.0 twin turbo V6 engine include:

As carbon deposits form it begins restricting air-flow into the cylinders. This can throw off AFR’s and lead to engine misfires. In turn, you’ll likely notice a rough idle and stuttering or hesitation while accelerating.

Power loss is a major symptom of excess carbon build-up on Ford 3.0L EcoBoost intake valves. However, it’s the harder symptom to notice. Carbon deposits form over the course of tens of thousands of miles. As such, power and performance loss is gradual rather than something that occurs quickly.

It does require removing the 3.0 EcoBoost intake manifold, so labor is a few hours. Expect most shops to charge about $350-600 for walnut blasting. Otherwise, there are some intake sprays that may work. They can help slow the carbon build-up process, but it’s not an effective method of cleaning deposits once they form.

Oil pan leaks are a major topic for the 2.7 and 3.0 EcoBoost engines. It’s not hard to find 2.7 EcoBoost owners who have been through multiple oil pans. The design is the same on the 3.0L twin turbo engine. It simply appears less common since it’s a less popular engine.

Anyways, the problem originates with the oil pan RTV seal. It was a really poor design by Ford. A plastic oil pan bolting up to an aluminum block is a recipe for failures. In August 2019, Ford re-designed the oil pan with a press-in-place gasket. This seems to hopefully be a long-term fix for the oil pan leaks.

Anyways, it’s a Ford 3.0 EcoBoost problem to keep an eye on as things progress. The new oil pan design does work on the 2018+ models, but not 2017. Assuming it’s a long-term solution then this shouldn’t be a major concern for 2018+ Lincoln and Ford models with the 3.0L V6 engine.

A few symptoms of oil pan leaks on the 3.0 twin turbo EcoBoost include:

Oil leak symptoms are usually pretty simple. The oil pan gasket lies low in the engine bay, so oil will usually drip to the ground. If you notice this then it’s time to look further into the oil pan. In some cases you may also notice burning oil smells from the Ford EcoBoost engine. Light smoke is also possible if the oil is leaking and burning off.

Many oil pan failures occur during warranty, which makes replacement less concerning. It still takes a few hours for the RTV sealant to dry, so it’s an overnight or couple night job. Not fun to be without your car, but warranty coverage is a big help.

If the oil pan does fail then you should ask to confirm the repair is done with the updated oil pan design. Again, replacing with the old design seems to be a short-term solution.

Alright. We’re out of actual engine problems to discuss for the Ford 3.0 EcoBoost. However, spark plugs and ignition coils are a big topic for turbo engines. It’s not fair to call this an issue since it’s standard maintenance on any ICE. Although, boost pressure increases cylinder pressures significantly, and that puts a lot of stress on the ignition system.

Those planning to tune or mod their Ford 3.0 EcoBoost engine should expect even less. We come from the BMW world where we replace spark plugs every 10,000 to 20,000 miles on modded engines. Point is – twin turbo engines like the 3.0L V6 can be more demanding on maintenance. Spark plugs and ignition coils are a shining example.

As spark plugs and ignition coils wear down they can’t effectively light the air-fuel mixture. This leads to 3.0 EcoBoost misfires, which may trigger the check engine light. Otherwise, rough idle and poor overall performance are common with old ignition parts.

Fortunately, spark plugs and ignition coils are simple to replace. Even novice DIY’ers can knock this job out in the driveway within an hour or two. A set of spark plugs run about $50-100, and labor can add another $50-100 if you cannot DIY the repair.

Ignition coils are a bit more expensive with a set of 6 running about $150-250, and similar labor to spark plugs. Again, these aren’t true problems on the Ford 3.0 EcoBoost. It’s just a quick point that turbo engine can be a little more demanding.

Is the Ford 3.0 EcoBoost twin turbo engine reliable? Yes, we believe the engine offers above average reliability. The faulty oil pan is the only true and common flaw on the 3.0L V6. Carbon build-up is simply a small downside to what’s otherwise great technology. We really like the reliability of all Ford EcoBoost engines, and the 3.0 EcoBoost is no different.

Not to be overly repetitive, but one other factor is maintenance. Twin turbo engines like the Ford 3.0 V6 are a bit more demanding when it comes to the ignition system, fluid changes, etc. It’s a trade-off for the impressive balance of performance and fuel economy.

Speaking of, a large factor in Ford 3.0 EcoBoost reliability is maintenance. Always use high quality oils, change all fluids on time, and address problems ASAP when they occur. Do all of this and the 3.0L twin turbo engine can deliver great reliability and longevity.

What’s your experience with the 3.0 EcoBoost? Are you considering one?