Chevy/GM released the 2.0 LTG Ecotec engine in 2013 in the Cadillac ATS and Chevrolet Malibu. The engine then made its way in a handful of other models, including the 2.0T Camaro. It makes respectable power for its size with 230-275 horsepower and 260-295 lb-ft of torque. The GM/Chevy 2.0T Ecotec also delivers solid fuel efficiency. However, no engine is perfect and there aren’t any exceptions here. In this article, we discuss a few 2.0 Ecotec LTG engine problems as well as overall reliability. 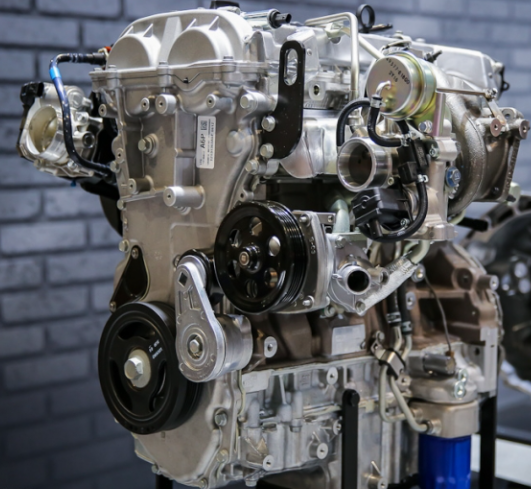 GM also uses direct injection on the 2.0 Ecotec for better performance and efficiency. Again, these are all common specs among newer 4 cylinder engines.

The GM 2.0L turbo Ecotec engine is in the following cars:

A few of the most common problems with the 2.0 Ecotec engine include:

We’ll discuss the above issues in-depth through the rest of this article. However, it’s a good time to knock out a few quick notes first. We are referring to these as the most common 2.0 LTG problems. That doesn’t mean they’re truly common issues in the sense they affect a large percentage of engines. Rather, when something goes wrong these are some of the common areas.

That said, the 2.0 Ecotec is a pretty reliable engine. We’ll touch on reliability again at the end of this article. For now, let’s jump in and discuss the above 2.0 LTG Ecotec engine problems.

There are two different issues to discuss with Chevy 2.0T piston problems. We’ll be quicker on this first portion of the topic. Some earlier model 2.0 LTG Ecotec engines suffered from very early piston failures. A lot of those failures occurred within the first several thousand miles. In these cases it appears to simply be some early flaws with the engine. The Camaro 2.0 Ecotec seemingly doesn’t run into these problems as often, and the same can be said for many later models.

However, piston failures on later years and models are possible. It’s not a truly common issue by any means, but it’s worth the mention since piston problems lead to big repair bills. Often, piston damage is a result of pre-detonation and the failure usually occurs around the rings and ring land area.

Pre-detonation is a bigger concern on turbo engines due to extreme heat and cylinder pressures. With proper fuel on a stock engine these problems are very unlikely. However, piston failures are something to consider if you’re planning to tune and mod the 2.0 LTG engine. Ensure you’re running a safe tune with proper fueling.

Symptoms of piston faults on the GM/Chevy 2.0T engine include:

When a piston takes a dump the symptoms are usually very noticeable. The 2.0 Ecotec will run very poorly overall. You might also notice excessive smoking and oil consumption. Other symptoms include knocking, misfires, and rough idle.

In most cases a piston problem on the GM 2.0T will require a new engine or full rebuild. Pistons usually score the cylinder walls at the least, and chunks of metal can do further damage. Lucky folks with minor cases may only require new pistons and a basic rebuild. Even then, a rebuild can be risky if there’s another root cause of failure that goes without notice.

Point is – this repair isn’t cheap and can easily exceed $5,000 in repair bills between a new engine, parts, and labor. Fortunately, most of the failures to date were covered under warranty. As these engines age and more are off warranty you might not be so lucky, though.

We find ourselves writing about carbon build-up all too often now days. It’s probably not fair to call it an actual problem on the 2.0 LTG Ecotec – or any other engine for that matter. Carbon build-up on intake valves is simply a downside of direct injection.

All engines produce some degree of oil blow-by. The oil makes its way through the intake tract where it typically forms deposits on the intake ports and valves. With standard port injection fuel is sprayed into the intake ports. That would help wipe away any oil and prevent it from building up.

However, the Chevy 2.0T sprays fuel directly into the cylinder. There’s nothing to wipe deposits off the intake valves, so over time you’re left with carbon build-up. Tons of modern cars use direct injection so this issue extends beyond just the 2.0 Ecotec engine.

Expect excess carbon deposits to become a problem every 70,000 to 100,000 miles. It’s not an urgent fix and some Chevy 2.0 LTG engines will probably live their whole lives without an intake valve cleaning. Though, if left for too long it will begin to affect performance and driveability.

Look for the following symptoms that may indicate the Chevy 2 liter LTG is in need of intake valve cleaning:

A rough idle and misfires are two of the common signs that point to excess carbon build-up. However, those are common symptoms for many other issues – including spark plugs and ignition coils. Turbo cars love to burn through plugs and coils, so consider those parts as the potential issue.

Anyways, carbon deposits might also cause stuttering and hesitation or power loss. It’s unlikely you’ll notice the power loss since it occurs over time as carbon deposits form and slowly begin restricting air-flow.

Walnut blasting is a popular means of cleaning the intake valves. It involves walnut media shells and a heavy duty shop vac. The media shells are pretty cheap, so labor is the main cost. The 2.0 Ecotec intake manifold will need to come off, and then walnut blasting itself takes a little time.

Oil leaks on the Ecotec engine may occur in several different areas, and that can be said about any engine. One common flaw on the GM 2.0T LTG appears to be the timing cover. The front cover is known to begin leaking oil prematurely. Often, it’s a slow seep and not a huge leak that results in oil dropping onto the ground.

If you’re in the market for a Chevy 2.0 LTG it’s a good idea to check the block around the timing cover. Since oil hits the block it’s often burned off quickly, but will result in black gunk. Again, this appears one of the most common oil leaks on the LTG Ecotec.

The valve cover gasket is another area that may be an issue. Turbo engines produce a lot of heat, and that takes a toll on gaskets and seals. Heat cycles and age also put a lot of abuse on these parts. It’s not uncommon for some gaskets to start letting go north of 10 years old and 100,000+ miles. We suspect these will become more frequent issues as the 2.0 Ecotec ages.

Oil leak symptoms are pretty straight-forward, but check for the following:

Again, this is pretty basic stuff. The timing cover usually results in a slow seep of oil that burns off on the engine block. With this kind of leak you may not notice any visible leaks from the 2.0 Ecotec (unless you inspect that area specifically). However, you might notice some burning oil smells or a little smoke once the engine is warm. Valve cover gaskets and many other possible leaks will likely show visible signs.

The exact fix will of course depend on the specific oil leak. Fortunately, an oil leak is normally a cheap fix for the DIY crowd. Most gaskets and seals that develop leaks are inexpensive. It’s the labor that’s the killer part on most oil leaks, so that can drive repair bills up to $500-1000+.

Is the Chevy/GM 2.0 Ecotec reliable? Yes, we believe this engine earns average to above average remarks for reliability. It’s not plagued by endless common problems. The few problems the 2.0T LTG is subject to are hardly common in the sense they don’t affect a huge number of engines.

Although, as with all turbo engines, the 2.0 turbo can be a bit more demanding on maintenance. Turbo engines like to burn through spark plugs and ignition coils quickly. There’s an increased importance in running high quality, expensive synthetic oils. A turbo system adds more room for potential failures. The list goes on. Point is – those unfamiliar with turbo engines may not love the little bit of added maintenance.

Additionally, turbo engines are easy to tune and mod for extra power. That can bring along reliability concerns for 2.0 LTG Ecotec engines. We’ll have a guide for this stuff in the future, and it’s good to note the 2.0T can withstand some extra power. However, it does increase heat and stress on the motor.

The GM 2.0 LTG engine offers a great balance of performance and efficiency. It’s hard to argue with 275hp and 295tq in the Camaro 2.0T. While it doesn’t offer quite the same power as larger V6 or V8 engines the 2.0 Ecotec has plenty to offer. However, no engine is perfect and this applies to the 2.0 LTG.

Some owners run into issues with the pistons failing at low mileage. Most cases occurred under warranty, but it still raises some small concerns for longevity. That’s especially true for those wanting more power out of the 2.0 Ecotec LTG. Oil leaks from the timing cover area is another issue that pops up more frequently than other problems.

Otherwise, intake valve cleaning is something to consider every 70,000 to 100,000 miles. Turbos and direct injection are great technology for performance and efficiency. However, carbon build-up is a shining example that these technologies do have their own downsides.

Maintenance is important on any engine, and that’s especially true with the turbo 2.0 Ecotec. Stay on top of basic maintenance, use quality oils, and fix problems if and when they happen. Do all of this and chances are you’ll have a great, reliable experience with the Chevy 2.0 LTG Ecotec engine.

What’s your experience with the 2.0 Ecotec problems? Are you considering one?