The 6.1 HEMI made its first appearance in the 2005 Chrysler 300C SRT-8 and remained through 2010. It offers 425 horsepower and 420 lb-ft of torque. 6.1L HEMI engines come without MDS, but use a stronger block and internals than the 5.7 engine. Overall, the 6.1 V8 is a great engine that offers a good balance of performance and reliability. However, no engine is perfect and that applies here, too. In this article, we discuss a few common problems with the 6.1 HEMI as well as overall reliability. 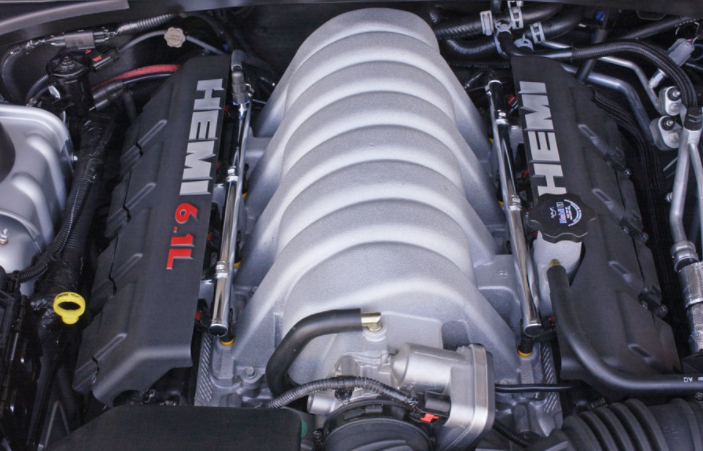 Dodge/Chrysler 6.1 V8 engines are found in the following cars:

A few of the most common problems on the Dodge-Chrysler 6.1 HEMI include:

In the rest of the article we discuss the above issues in greater depth. We also finish the article with some final thoughts on the 6.1 V8 reliability. Before diving in let’s knock out a few quick notes. We’re considering these among the most common problems, which doesn’t necessarily mean they’re truly common. Rather, when problems or failures occur these are a few known areas.

The 6.1L HEMI lacks some of the technology found in the 5.7 and 6.4 HEMI engines, such as MDS. However, that helps aid in reliability in some ways. They’re all reliable engines, but the 6.1 might have a slight edge. Point is – the 6.1 HEMI is a great engine and none of these problems are truly common.

Some believe problems with the lifters and lifter rollers aren’t quite as common on the 6.1 HEMI. However, it’s a lower production engine than the 5.7 and 6.4 which may play into that. Regardless, the internet has a tendency to blow things out of proportion and this certainly isn’t an issue that affects a large percent of 6.1L V8’s. However, seized lifter rollers are a known issue on the 6.1 HEMI and many other HEMI engines.

It seems to root cause of lifter roller issues is simply poor design and/or lack of lubrication. Ultimately, the lifter rollers seize and the lifter then contacts the cam lobes. This results in an audible ticking sound due to the metal on metal contact. For some, it’s only the start of the problems when a 6.1 HEMI lifter roller fails.

Metal on metal contact may result in metal shavings getting into the engine oil. The oil filter should catch most of the metal if the issue is caught and repaired in a timely manner. If left alone it’s possible for further damage to occur if the metal shavings enter and damage other parts, like the 6.1 V8 oil pump.

The following symptoms may point to an issue with the HEMI lifter rollers:

It can be hard to diagnose problems with the 6.1 HEMI lifters and lifter rollers. Usually the ticking sound is the only noticeable symptom. As with the other HEMI engines, some owners notice ticking without any actual underlying faults. This makes it even harder to diagnose, since an engine tick doesn’t always point to a seized lifter roller. As problems become more severe you might notice misfires or a check engine light.

Those who run into lifter roller failures typically see it begin around 70,000 to 120,000 miles. The below video gives a quick peek at the lifter problems on the 6.1 HEMI engine.

When seized lifter rollers are caught in time it’s highly unlikely any additional damage occurs. Regardless, the engine must be opened in order to replace/fix the camshaft and lifters. The parts and labor alone can easily add up to $1,500+. Savvy DIY’ers can save a decent chunk of change on the repair since most costs are labor.

Lifter roller repairs can add up to even more in the rare cases metal shavings damage other parts. Again, it is unlikely that occurs but it’s still good to be aware and on the look-out if you’re noticing ticking or other issues.

Misfires are rarely an issue by themselves, but rather are a symptom of another underlying problem with the 6.1L engine. As such, we don’t believe it’s fair to call misfires a true problem. However, as with most HEMI engines, the 6.1 HEMI uses 16 spark plugs. They’re standard wear and tear parts, but 16 spark plugs leaves a lot of room for error.

As a high performance engine, spark plugs will likely only last about 40,000 to 70,000 miles. A lot comes down to how hard you push the 6.1 liter V8. Ignition coils are another maintenance item that may cause misfires. They typically last at least twice as long as spark plugs.

Premature ignition coil or spark plug failures aren’t common by any means. However, it can and does happen especially with a whopping 16 spark plugs. Nonetheless, plugs and coils are basic maintenance items. Don’t overlook these simple repairs if you’re having misfires on the 6.1 HEMI.

Some symptoms that indicate the 6.1 HEMI might be misfiring are as follows:

Misfires should trigger the Dodge/Chrysler HEMI engine to throw a fault code. Rough idle and engine hesitation may also point to misfires. Power loss does occur, but if it’s one out of the 16 spark plugs you probably won’t feel the power loss.

There are tons of other issues that cause the 6.1 HEMI to misfire, but spark plugs are among the most common. Again, it’s standard maintenance but two spark plugs per cylinder leaves more room for failures and higher repair costs.

Spark plugs and ignition coils are some of the easiest repairs on almost any engine. That includes the 6.1 HEMI. Most should be able to knock out these repairs in the driveway in less than an hour. Expect spark plugs to require replacement every 40,000 to 70,000 miles, depending on driving habits. Ignition coils should last about twice as long.

It’s a good idea to replace all spark plugs at the same time if it’s been a while. The failure may start with one, but the rest are likely soon to follow. A set of 16 spark plugs comes in around $100-150. If you plan to go to a repair shop labor will likely come out to another $75-150.

To be honest, this normally wouldn’t make the list. Fortunately, there just aren’t many common problems to discuss on the 6.1 HEMI engine. High oil consumption is a known problem that’s even led to a few total engine failures. It’s important to check the oil levels on the 6.1L V8 every week or so. That can be said for any engine as it’s just good practice.

Anyways, the oil consumption itself doesn’t appear to have any ill effects on 6.1 HEMI reliability or longevity. All engines experience oil consumption due to natural oil blow-by. Some consume more than others. If you’re noticing excessive oil consumption of 1+ quarts per 1,000 miles then there may be a true underlying problem.

Otherwise, keep an eye on oil levels and don’t allow it to go low. Losing too much oil can cause low oil pressure, which subjects bearings to extra stress. It’s very uncommon but some 6.1 HEMI engines have run into engine failures due to bearings or rods. Low oil or poor oil quality is likely a factor in a chunk of those cases.

If you want to reduce oil consumption on the 6.1L HEMI then a few of the following suggestions may help:

Most of this is basic stuff. It’s always a good idea to change the oil on time and run high quality oils. The 6.1 HEMI is a performance engine, and any performance engine is bound to be a little picky about oils. Otherwise, avoid excessive idling as that can increase oil blow-by. A common topic for the 6.1 HEMI is installing an oil catch can. Not only does this help catch oil to avoid any possible carbon build-up, but it also helps reduce consumption in many cases.

Is the 6.1 liter HEMI engine reliable? Yes, the 6.1L V8 earns above average remarks for reliability. It’s not the most reliable engine around, but it’s also far from the worst. All of the modern HEMI engines offer respectable reliability, and the 6.1 might be the best out of them all. The 6.1 HEMI is a bit more simplistic which definitely helps.

Lifter rollers are really one of the only true “common” problems on the 6.1 HEMI. Otherwise, we didn’t really have too much to discuss. The engine does use 16 spark plugs, which leaves a lot of room for potential failures and misfire problems. High oil consumption is another topic, but it doesn’t seem to cause any reliability or longevity concerns. Just keep an eye on oil levels.

Maintenance is, of course, one of the keys to ensuring the 6.1L V8 lives a long and reliable life. Change fluids on time, use quality oils, and repair problems in a timely manner when they occur. Do all of this and chances are you’ll have an excellent experience with the 6.1 HEMI. We believe it offers a very compelling balance of performance and reliability.

What’s your experience with the 6.1 HEMI? Drop a comment and let us know!