The Subaru WRX is a legend on the streets. Turbocharged. Boxer four-cylinder. All-wheel-drive. It’s hard to deny that they’re the complete package. They’re almost endlessly modifiable too. A performance intake is one of the least expensive, easiest to install, and most pleasing modifications that you can do to a WRX.

While you’ll see a slight jump in power, the sound is really what sells it. Sound is a lot of the battle when buttoning up a WRX. A good quality blow-off valve is one part of the equation and an upgraded cold air intake is the other.

This upgraded Subaru WRX intake guide will specifically focus on the 2008-2015 VA generation of Subaru WRXs. With that being said, the same information still applies to earlier WRX generations as well.

In all honesty, very few VA WRX owners upgrade their intake strictly for performance benefits. And, if you are expecting massive horsepower and torque gains, you’ll be disappointed. Unless you are running a truly ludicrous 400+ whp WRX, a stock intake should do just fine from a performance standpoint.

Nonetheless, there are some performance benefits to be had at higher horsepower ranges. In the case of a highly tuned WRX pushing astronomically high boost pressure and an aggressive fuel system, an upgraded intake will improve performance noticeably more than on a stock WRX. This is because increasing boost and power requires a lot of extra airflow, which can quickly overwhelm the OEM intake system. Efficient cold air intakes for the 2.0L FA20F engine can meet the demands. A few benefits of a Subaru WRX cold air intake include:

Of the improvements listed above, the easier maintenance and improved induction sounds will be the most noticeable. While it is possible to gain a sizable chunk of performance from a true cold air intake system, a standard open-box upgraded WRX performance intake will only yield anywhere between 0 and 15 horsepower. It’s a difference you aren’t likely to notice.

You’ll notice the sound though. Aftermarket WRX intakes most often feature an ‘open air’ intake design which removes the factory airbox. This allows the intake to project more audibly, adding an addicting whoosh to your WRX’s soundtrack. Under acceleration is where induction sounds are the loudest.

Since the FA20F engine that powers the VA WRX features a  twin-scroll turbo, turbo lag isn’t as prevalent as it was in previous generations. For that reason, the potential benefit of quicker turbo spool times is almost lost on the VA WRX. 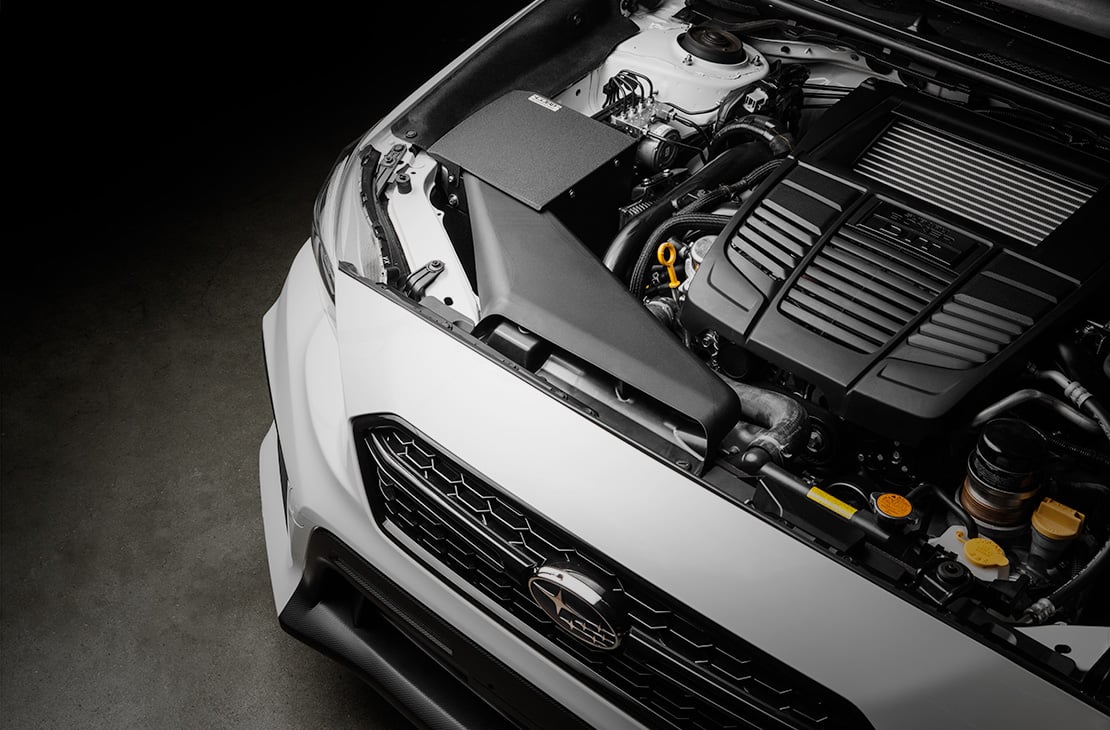 There are, however, performance WRX cold air intakes that reroute factory intake piping to a lower point outside of the engine bay. This allows the intake to be fed truly cool air and pass it on to the turbocharger. In this case, a measurable change in performance is present. With some high-end cold air intakes, 30-40 horsepower gains are within the realm of possibility.

In this section, we’ll discuss a few of our favorite cold air intake options for the Subaru WRX. A few quick notes before diving in, though. This is by no means an exhaustive list. Tons of intake options exist for the WRX. We’re simply listing a few that we believe offer a great balance of price, quality, and performance.

Additionally, the suggestions in this guide are geared towards the VA 2008-2015 generation Subaru WRX. With that being said, there are many options available for earlier Gen 3 and Gen 2 WRXs as well, many by the same manufacturer.

As a general rule of thumb, you should always get a tune after installing an aftermarket intake on your WRX. Without a tune, the marginal increase in power from an upgraded WRX intake is almost completely eliminated. The FA20F needs to be told to adjust the air/fuel ratio to compensate for the increased air from the intake. Otherwise, the stock map will retain the factory mixture, resulting in no power increase.

If you have done any modifications to your Subaru in the past, chances are that you’ve heard of Cobb tuning. In addition to bolt-on performance parts, they are also known for their high-quality access ports and tuning products. They’re a big name in Subaru performance parts and are backed by thousands of enthusiasts and customers.

The Cobb Tuning Big SF intake is a closed air performance intake for VA WRXs. In contrast to open-air systems, closed air intakes are enclosed in an airbox similar to factory style. While still being a closed air system, the Cobb SF intake is less restrictive than the factory airbox.

The Cobb Tuning WRX Intake kit comes with all of the necessary hardware to install on your WRX in a matter of minutes. It is a simple unbolt/rebolt swap, bolting up to factory install points. The intake tubing and airbox are made of high-grade aluminum and feature a reusable green dual cone intake filter. In terms of quality, it’s hard to beat.

Once again, despite being a closed air system, which usually limits the amount of induction noise that gets to the driver, the Cobb SF is said to produce a very nice noise. It does, however, retain the same style and shape as the factory airbox, failing to clear up much space in the engine bay.

In a similar situation to the manufacturer listed above, Grimmspeed is another Subaru performance part manufacturer that needs no introduction. Since their start in 2016, Grimmspeed has been one of the most prominent manufacturers in the Subaru aftermarket space, and for good reason. All of their products are quality.

With the Grimmspeed Stealthbox, Grimspeed approached the Subaru WRX upgraded intake formula a bit differently. The kit provides all of the benefits found in many other performance WRX intakes but does so in a discreet and visually appealing package. It also features some unique features that many enthusiasts find enticing.

The Stealthbox was given that name because of Grimspeed’s low profile heat shield design that covers the intake. The heat shield utilizes the factory hood scoop to channel air from outside of the engine bay into the upgraded intake. This also shields the MAF sensor from any heat generated by the engine. The intake itself is coated in heat shielding as well, keeping it cool.

Since the Grimmspeed intake is a true cold air intake system, horsepower gains are slightly elevated compared with the other options on our list. The colder entrance air temperature allows a VA WRX with an intake tune to produce an extra 21whp and 32wtq. It doesn’t get much better than that from an upgraded WRX intake.

Their WRX Cold Air Intake is no exception. Unlike both of the options above, the AEM Cold Air Intake is an open-air system. To compensate for the filter being exposed, AEM included a heat shield for it to keep out warm engine air. The downward-angled intake tube pulls cool air from near the underside of the car. This also allows the entering air to maintain its velocity in an unrestricted way.

Once again, everything needed to install the 21-732C intake is included with your purchase. The Subaru WRX upgraded intake bolts directly to factory equipment. In terms of performance, the AEM WRX intake is very similar to the Cobb. The AEM option is a louder intake than the Cobb because the AEM is an open-air solution.

Performance intake systems are among the most popular aftermarket upgrades for good reason. They offer a good balance of performance, sounds, and price. This is especially true on the 2.0L FA20F engine where airflow is essential. Power gains can even be as high as 10-15whp peak on tuned and modded VA WRXs.

Choosing between upgraded WRX intakes is often a matter of weighing the factors that are most important to you. If you prefer higher performance, a true cold air solution, like the Grimmspeed Stealthbox, is the best option. If you want impressive induction noises, an open-air intake, like the AEM WRX intake, is the better route.

Regardless of your choice, all three of the above options are high quality. All of the above-listed manufacturers have extensive Subaru modification pedigree. Upgraded WRX intakes are a fun addition nonetheless and will put a smile on your face every time you put your foot down!