The 2015-2021 VA Subaru WRX with the FA20DIT is a fantastic car that responds very favorably to performance mods. Previously, we ran an article about the best Downpipe/J-Pipe for the WRX (VA), so now let’s look at intercoolers. Intercoolers are fantastic upgrades for those looking to keep their intake temperatures down, and the WRX responds incredibly well to them. In this guide, we are going to look at the benefits of upgrading your intercooler on the Subaru WRX, as well as the different options available. We will also provide our recommendations for the top intercooler options for the FA20 WRX. 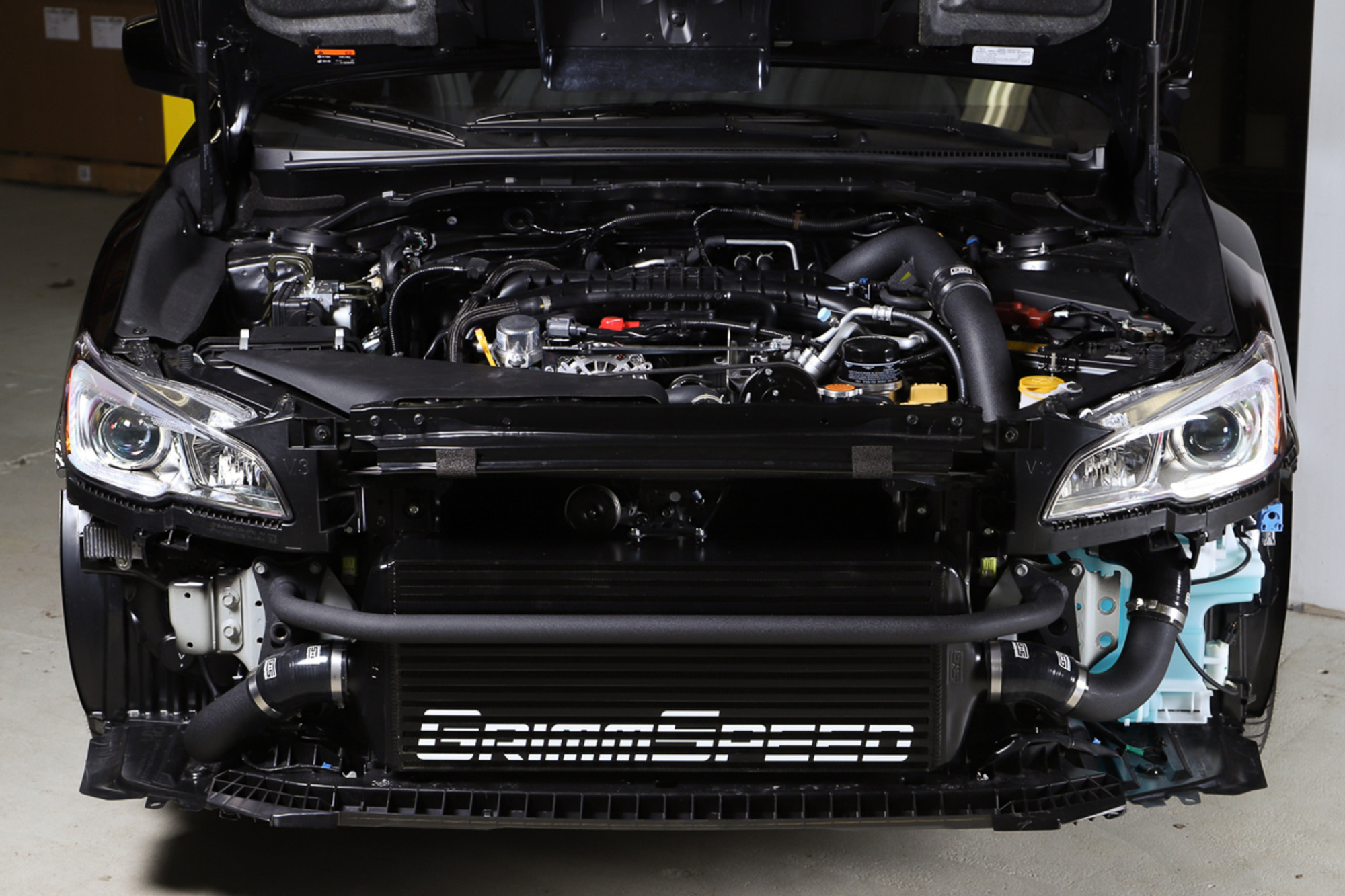 Intercoolers are the best upgrade for reducing intake manifold temperatures on the Subaru WRX (VA). Turbos are largely powered by exhaust gasses from the engine, which means they take on a lot of heat. In addition, when air becomes compressed it also starts to heat up. Hot air is less dense and has less oxygen than cooler air, so higher intake temperatures result in reduced performance. Warmer intake temperatures can also lead to heat soak, knock, and pre-ignition, which can destroy the FA20DIT over the long run.

The purpose of an intercooler is to reduce the temperature of the air before it reaches the combustion chamber. Upgrading your intercooler on the WRX gives you improved cooling efficiency and recovery time compared with the stock unit. The reduced temperature means the air is more dense and has more oxygen, which creates more power. The stock intercooler on the FA20 is adequate for factory power levels, but it quickly becomes over-matched at anything above.

Intercooler upgrades on the Subaru WRX (VA) can generally be classified in two categories, front-mount intercoolers (FMIC) and top-mount intercoolers (TMIC). TMICs fit directly into the stock location on the WRX and bolt up to the OEM charge pipe and throttle body.

FMICs relocate the intercooler to behind the front bumper of the car, directly in front of the radiator. They also replace the OEM charge pipe and usually do not fit the OEM intake very well.

TMICs are much easier to install on the WRX because they retain all the factory intake components. They also still utilize the factory hood scoop for cooling within the engine bay.

Front-mount intercoolers are a much more involved install than top-mounts, and typically require some extra modification. Front-mounts usually do not connect cleanly to the factory intake system, so they often require the purchase and install of a new intake. In addition, on the WRX they also require the inside of the bumper to be cut and trimmed to accommodate the core.

FMICs have much more piping than TMICs, which increases turbo-lag slightly with front-mounts. To make up for it, they generally have larger cores than top-mounts and provide increased efficiency over them.

Probably the biggest advantage of switching to a front-mount intercooler is going to be its ability to combat heat soak. Since it sits in front of the engine, not on top of it, and the opening of the bumper is larger, FMICs stay considerably cooler than TMICs. This helps prevent heat soak and leads to improved cooling lower intake temperatures for the FA20.

One of the biggest benefits of upgraded intercoolers on the WRX is the increase in power. Even without an equivalent tune, both top-mount and front-mount intercoolers can see decent gains. You can increase power a little more with the FMIC, but both can add at least 10-20 whp/wtq.

However, getting your car tuned really unleashes the full benefits of intercoolers. Running a bigger intercooler allows your tuner to run higher levels of boost than stock for longer without risking knock. That means bigger peak power and a larger power band for the engine. With a tune, people have reported as much as 42 whp utilizing a FMIC on the FA20.

Intercoolers for the FA20 WRX are also beneficial as safety mods for cars, especially for those who live in hotter climates. Subaru WRX engines are known to be prone to knocking, and higher intake temperatures only exacerbate the problem. Hotter temperatures also means less dense air, and your car can actually lose horsepower with an inadequate intercooler due to heat soak and high intake temperatures.

You probably will not see a huge benefit in the winter months, but in the summer months intercoolers really shine. Both TMICs and FMICs can reduce intake manifold temperatures by as much as 40* during WOT on the FA20. This vastly decreases chances of misfires, pre-ignition, or engine knock.

TMIC vs FMIC: Which is right for me?

There are several important considerations to keep in mind when deciding between a TMIC and a FMIC. Price is going to be the biggest difference, as FMICs are much more expensive than TMICs on the WRX. Front-mounts usually also require both the purchase of a new intake and modification to the bumper. Most front-mounts also require the replacement of the OEM crash protection bar, which can be a safety issue.

Front-mount intercoolers are much better at fighting heat soak than top-mount intercoolers. Top-mounts sit on top of the engine, and thus collect heat constantly because hot air rises. Front-mounts sit in front of the engine and radiator, allowing them to shed heat much easier. The opening of the bumper is also larger than the hood-scoop, which allows FMICs better access to cooler ambient air, too.

If you already have several bolt-on mods and are looking to squeeze as much power as you can out of your WRX, FMICs are the way to go. If you’re hoping to improve cooling in the summer while getting a modest increase in power, TMICs are probably your best bet. Tuners will usually run more boost for longer with a FMIC compared to a TMIC.

Alright, now we have a good understanding of intercoolers and their benefits for the WRX. Now let’s look at our recommendations for the best FA20DIT WRX intercoolers. This list includes both top-mount and front-mount intercoolers, with top-mounts coming first.

This is not a comprehensive list of intercoolers for the VA WRX, but these are the top options in terms of craftsmanship, price, and performance. These intercoolers will fit all years of the VA WRX, from 2015-2021.

The top choice on our list for TMICs for the FA20 WRX is the GrimmSpeed Top-mount intercooler. Anybody who is familiar with Subaru knows that GrimmSpeed is hands down one of the top American made brands, and their TMIC is an absolute beast. It features a 13.1” x 10” x 3.75” Cross Flow Core with a fully integrated two-piece splitter. It has cast aluminum end tanks and includes a pre-drilled bung for easy water/methanol system integration.

The GrimmSpeed TMIC can give FA20 WRXs 10-20 whp without a tune, and 15-30 whp with a tune. Its fitment and craftsmanship are excellent, and the integrated splitter replaces the stock unit with one that’s much more efficient. Intake temperatures are reduced by as much as 40* when compared with the stock unit.

GrimmSpeed products are all 100% made and manufactured in Minnesota and utilize TIG welded construction. Their FA20 WRX TMIC is one of the best, if not the best TMIC on the market, and is at a great price-point.

Our second ranked top-mount intercooler is from the trusted manufacturer Garret Motion. Garrett is one of the premier aftermarket and OEM turbo manufacturers, and their intercooler technology is also top-notch.

The Garret TMIC for the FA20 WRX features a 13″ x 10.2” x 4” core capable of up to 530 hp. It is 70% larger than stock and can produce gains of up to 16 whp/wtq. Users should see reductions of intake temperatures by as much as 30* under WOT. It is also great at recovering between WOT runs and during multi-gear pulls.

The Garret TMIC won’t offer the same performance as the GrimmSpeed, but it is considerably cheaper. It is a fantastic budget option for those looking to upgrade without breaking the bank. Used ones can often be had for only $400-500 in the classifieds.

Our first front-mount intercooler on the list is from Cobb Tuning. Cobb is an internationally acclaimed performance company, and their FMIC for the FA20 WRX more than lives up to the hype.

It features a huge 24″ x 11″ x 4″ core with 2.5” piping, capable of absolutely massive horsepower gains – yet, it still works efficiently on mid-range builds. It is compatible with the Cobb Big SF Intake only, so be sure to get them as a package. The Cobb FMIC does not require any modification to the bumper, only to the undertray on the WRX.

One of the biggest selling points for the Cobb front-mount is that it is 100% CARB compliant. Users can expect gains of as much as 40whp with a tune, and reduction in intake temps to nearly ambient temperatures.

In addition to their TMIC, we also have GrimmSpeed’s FMIC on the list because of its solid performance. It features a massive 27” x 11” x 4″ Cross Flow Core that can support small, medium, and big horsepower builds. The GrimmSpeed FMIC has the largest core available for the FA20 WRX.

The GrimmSpeed front-mount intercooler will fit the FA20 WRX’s stock intake or the GrimmSpeed intake. Users can expect as much as 35-40 whp with an accompanying tune, as well as a reduction in intake temps by up to 40*. GrimmSpeed is known for their incredible fitment and workmanship, and their FMICs are top of the line.

The next entry on our list is the PRL Front-mount intercooler for the FA20 WRX. They were one of the first companies to produce FMICs for the VA WRX, and they have certainly stood up over time.

The PRL is the best bang for your buck FMIC on the list. It is the least expensive and still provides excellent gains, and is recommended by many top tuners.

The final entry on our list is from Extreme Turbo Systems (ETS) and is one of the most proven on the list. ETS, like PRL, produced one of the earliest FMIC kits, and they have been used on several iconic and huge hp builds. The first 9 second Subaru WRX with the FA20 featured an ETS FMIC.

The ETS core is huge, 26” x 11.37,” and has options for 3”, 3.5” or 4” thickness. You can also get an optional titanium brushed piping kit for increased cooling on the cold side. Users can easily expect 30-35 whp gains from the FA20 using the ETS FMIC, and should see intake temperature reductions of up to 40*.

An upgraded intercooler is a fantastic performance and reliability mod for the FA20 Subaru WRX. Not only are the hp/tq gains significant, but intercoolers also reduce the potential for heat soak and allow for more consistent and sustained performance. Reducing heat soak decreases the likelihood of serious engine problems like misfiring, pre-ignition, or knock, which greatly increases engine longevity.

Anyone running higher than stock power levels or living in a hot climate should seriously consider an upgraded intercooler for their VA WRX. Benefits will not be as prominent in the winter, but in the summer they are very noticeable and can help save your engine. Utilizing a tune in combination with your intercooler is the best bang for your buck and offers the biggest gains.

They are all designed to fit all years of VA WRX (2015-2021), so the real question becomes between a top-mount or a front-mount. Top-mounts are easier to install and are cheaper, but offer less performance and resistance to heat soak on the FA20DIT.

What’s your experience with Subaru WRX VA intercooler upgrades? Are you considering one?