The EJ engines have been a dynamic series throughout the history of Subaru. The Subaru EJ engines were initially introduced in 1989 to succeed the Subaru EA engine series. Every engine within the EJ set, including the Subaru EJ205 engine, is a 16-valve horizontal flat-four with single or double overhead camshaft variants. The versatility of the EJ engines has made them extremely popular for engine swaps and other applications outside of automobiles, even including light aircraft adaptations. However, throughout this article, we will focus directly on the Subaru EJ205 engine and its overall value and reliability.

The EJ205 was initially introduced in the WRX models outside of the Japanese market. However, the 5-door Japanese WRX did go through a small-time phase in which it also used the EJ205. Subaru found these engines substantial and quality enough to be placed in their popular WRX models from 1999 up until 2006. Also, Japanese models used the EJ207 engine from 1999 to 2001. For more information on the similar EJ engine variant, check out our previous guide on the Subaru EJ207 here.

For now, we’ll continue to examine some of the basic specs and overall pros and cons associated with the EJ205. Hows does this engine compare to the others within the EJ series, and what are some of the negatives that might affect its overall value? We answer those questions below and discuss 205’s history more thoroughly. First, let’s start off with some of the basic engine specs and design components for the Subaru EJ205 engine in the following section. 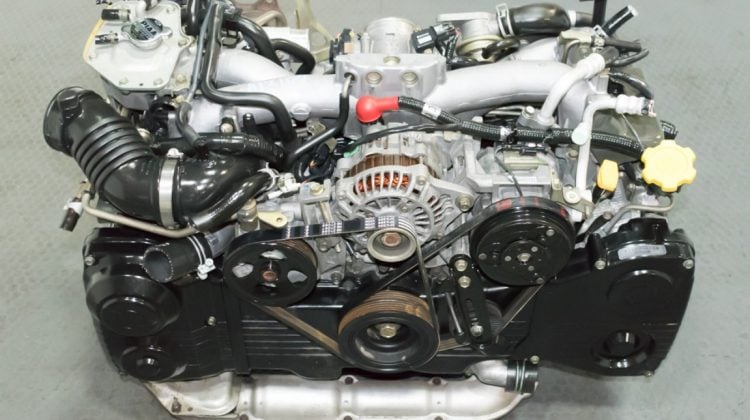 Specs for the Subaru EJ205 engine are as follows:

The EJ205 utilizes a Mitsubishi turbocharger and alternator that helps the engine produce 227 horsepower and 217 lb-ft of torque. These numbers may not be awe-inspiring on paper, yet the EJ205 has exceptional power considering its size and lightweight. But, again, this is enough power in a small size for some light aircraft configurations. The EJ205 engine hits the redline at 7,000 rpm. The aluminum block and head contribute to the engine’s overall power while maintaining its comparably lower weight.

Similar to the EJ207, the Subaru EJ205’s design is favored by many enthusiasts in the modding community. Proper mods and a good tune can extend the power of these engines considerably (we’ll discuss that more in the following sections below.) There’s a reason the EJ205 was placed in Subaru’s hallmark WRX model, and it’s a great engine in terms of performance for its size. With that said, let’s now take a look at the exact models that utilize the Subaru EJ205 engine and its most commonly favored modifications and customization options.

For further information on the EJ205’s successor, check out our previous article on the four most common problems for the Subaru EJ255 engine. For now, let’s stay focused on the Subaru EJ205 engine by jumping into some of its most commonly applied modifications.

The Subaru EJ engines attract many car modding enthusiasts due to the engines responding well to appropriate modifications and a good tune. Therefore, many WRX drivers with a 205 engine seek out different options to boost their power and overall performance with the help of supportive mods. With a healthy balance of proper mods and proper installation, EJ205 drivers can transform these lightweight engines into machines that truly produce substantial power for their size. However, with improper modifications and without a decent tune, enthusiasts may find themselves causing more harm to their EJ engines rather than creating benefits. Therefore, it’s important to note that a good tune is almost essential for any modification project. With that said, some of the most preferred mods for the EJ205 are as follows below.

Importantly, it’s essential to find components with proper fitment, yet also crucial to balance out all supportive mods and apply a good tune for any engine modification project to reach its full potential. So now, here is our list of some of the most highly recommended modifications for your Subaru EJ205 engine:

Re-mapping is one of the most cost-effective modifications that one can apply to their Subaru EJ205 engine. Re-mapping is the process of altering your engine’s CPU to further the parameters of its performance capabilities. In addition, alternative aftermarket ECUs can also be forms of mapping that boost overall performance value for the EJ205. Mapping along with proper supportive mods can make an immediately noticeably impact for many Subaru drivers seeking that performance boost.

In contrast, upgraded turbochargers or superchargers might be some of the most pricey modification options. However, they also might be the most effective in terms of boosting power immediately. Upgrading air induction is sure to boost your power sufficiently, and upgraded turbochargers or superchargers are sure to do so. Thus, increasing air supply allows for more fuel to be burned, allowing for more overall engine power.

Upgraded road cams may be the most dynamic change on our list for your engine, especially considering the extensive mechanical changes that will be made upon installing new road cams. Many drivers may seek out the option to re-grind a stock cam. Yet, many others may take the more expensive route of using upgraded cams if they find a good option on the market. Headwork or upgrading headers is just another option that can increase overall airflow for an engine. Upgraded headwork can remove airflow restriction and general turbulence creating a more powerful engine.

Yet, do these upgrades dramatically affect the overall reliability of your Subaru EJ205 engine? If they aren’t installed properly and aren’t balanced correctly with proper supportive mods and a good tune, then yes. Although, with a proper understanding of your engine’s potential, many drivers can build a supremely efficient, more powerful EJ205. With that said, let’s take a look at the Subaru EJ205 engine’s reliability and durability in more detail below.

Subaru is actively trying to increase its reputation of average or lackluster engine reliability and longevity. Although, many drivers claim that the EJ engines are some of the more durable and reliable offered by Subaru. Again, proper maintenance and usage of high-quality oil will always benefit and extend the lifespan of engines, including the Subaru EJ205. However, some problems are likely to occur to the EJ205 regardless of proper upkeep over time and wear.

The EJ205 is also known to demand high care and overall maintenance due to its turbocharger. Unfortunately, water cooler issues are reportedly more common than anticipated for many EJ205 drivers. This problem specifically seems to affect engine cylinder #4. Drivers should immediately aim to repair this problem before an engine strip-down, and costly repairs are required. Lastly, the Subaru EJ engines are known to have high oil consumption issues. Oil leaks and high oil consumption issues can have a variety of different causes. Consistent oil changes and usage of high-quality oil are imperative to extend the Subaru EJ205 engine’s lifespan.

Some of these problems above may never occur for many EJ205 drivers. Yet, these issues are common enough and are likely to occur as drivers hit higher mileage. In summation, the Subaru EJ205 engine has an average to an above-average rating in terms of overall reliability. Yet, like most engines, the EJ205 will run into many more problems if inconsistently maintained, modified improperly, or driven aggressively.

In conclusion, the Subaru EJ205 engine should be respected for its versatility and overall performance. WRX drivers and Subaru enthusiasts favor this engine for its ability to be modified into a more powerful project. It’s also hard to deny how diverse the many applications of the EJ engines can be, even outside of the hallmark WRX model. The Subaru EJ205 succeeded the EJ207 and helped Subaru progress with versatility and affordability into the modern automotive era.

The EJ205 may not seem extremely impressive in terms of power on paper. However, these engines are exceptionally well-powered considering their size and weight and when compared to similarly-sized models of their era. Some specific issues are present within the 205’s design. Yet, many of these problems can be deterred with proper maintenance, repairs, and research. Researching and understanding suitable modifications and upgrades are imperative for any EJ engine project. It’s important to remember that no good engine project locks proper supportive mods, and a good tune is essential.

Subaru enthusiasts and many drivers alike still utilize the EJ205 for different engine swap projects or replacement engines worldwide. The WRX has made a name for itself as one of Subaru’s most notable models, and it is definitely due to the success of the EJ engine series. The Subaru EJ205 can be an exciting project for some, or an enjoyable and reliable daily driver for others. Regardless, it’s hard to dismiss the EJ205 engine’s impact on the global automotive market.

Let us know in the comments below about your experience with the Subaru EJ205 engine or any of the EJ engine series variants!