The Subaru EJ207 engine is a four-stroke introduced to the automotive market in 1991. The EJ207 is one of many variants manufactured by Subaru, belonging to the EJ series. Subaru initially produced the EJ series engines in 1989 with the intention to succeed the past Subaru EA engine series. This turbo engine is known for its impressive power and is most commonly associated with Japanese Subaru WRXs. The EJ207 was only offered to the Japanese, U.K., and Australian automotive markets until it was succeeded by the current generation of Subaru FB engines. However, many American Subaru enthusiasts are purchasing the EJ207 for engine swap projects due to its power and performance.

The EJ207 is known to be more reliable and durable compared to similar Subaru engines such as the EJ257. Yet, like any engine, the 207 does have its various problems as well. Regardless, the Subaru EJ207 engine should be respected for its power and exceptional performance. Check out our previous write-up on the EJ257 for more beneficial information regarding the Subaru EJ series engines. Throughout this article, we will further examine the EJ207 power, specs, common mods, and reliability. But, first, let’s outline the basic specs of the EJ207 in more detail below. 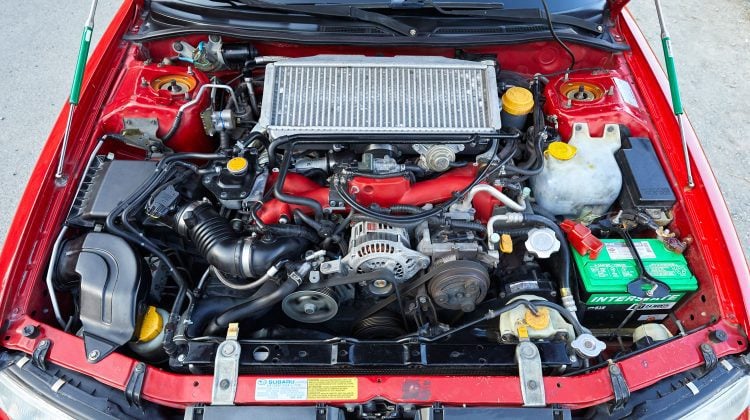 Specs for the Subaru EJ207 engine are as follows:

The EJ207, and the 257, both have a unique layout that is a signature of Subaru’s manufacturing style. The configuration of the EJ207 offers drivers that indistinguishable Subaru sound and overall performance driving experience. Subaru utilizes a turbo that boosts this engine’s power to an impressive rate considering its overall weight and size. Regardless of the horsepower output, the EJ207 still provides the essentials needed to get the job done. In other words, the 207 is favored by many in the automotive market for offering both speed and above-average handling capabilities within the Subaru WRX.

This Subaru EJ207 engine responds extremely well to modifications and upgrades, especially with the appropriate support mods. The specs don’t lie; with up to 328 horsepower and 318 lb-ft of torque, the EJ207 can accelerate and keep up impressively.

When car consumers think of overall reliability their mind does not immediately think of Subaru’s. This is especially true considering the fact that other popular models within the brand have had consistent issues with oil consumption and other various electrical applications. Subaru had a total of three lawsuits against them starting in 2012, specifically due to claims of engine defects for the EJ25 engines. The EJ207 does seem to have a better track record than the EJ257 in terms of durability and longevity. However, the Subaru EJ207 does have its inconsistencies and issues as well. The most prominent problems seem to be due to high oil consumption issues and various oil leaks. Fortunately, the 207 does have thicker block cylinder sleeves to protect the engine’s bore, as well as a better capability of cooling off the cylinder block compared to the 2.5-liter turbo engines from Subaru.

When compared to other Subaru models of the same era and size, the EJ207 ranks above average to good in terms of reliability. However, when compared to similar models of that time period from different manufacturers, the EJ207 would be rated above average at best. Many drivers report that their EJ207 engine is bulletproof, however, we found that too many essential repairs were needed after a mere 60K miles to agree with that label.

It’s important to note that The Subaru EJ207 is commonly modified and driven aggressively, which are two factors that do contribute to the reduction of any engine’s lifespan. With that said, let’s continue below examining some of the problems that make a negative impact on the EJ207’s overall reliability.

Some of the most commonly experienced problems for the Subaru EJ207 engine include:

Although these issues made our list of common problems for the EJ207, it’s important to note that not all engines will experience them. However, high oil consumption and oil leaks do seem to be a prevalent issue for the Subaru EJ20 series engines. Especially due to the fact that most Subaru EJ20 engines currently on the road are up to 20 years old with considerable wear.

High oil consumption and oil leaks for the Subaru EJ207 engine have numerous different causes. The most common area for oil leaks within EJ20 engines is the camshaft seals and valve cover gaskets. It’s vital to check those two areas periodically, as they are the likely culprits of oil leaks. Oil leaks can lead to high oil consumption and further engine damage that will reduce the overall power and lifespan of the EJ20 engines. Piston ring failure is also an extremely common catalyst for high oil consumption problems occurring within the EJ207. Like most cars, EJ207 drivers need to perform routine oil changes with high-quality oil in order to extend their mileage. High-quality engine oil and supreme fuel are crucial for both turbo EJ20 engines, including naturally aspirated versions. These issues are once again a reminder that proper maintenance and repairs are absolutely necessary.

The following issues may be symptoms of oil consumption problems for the Subaru EJ207 engine:

Naturally aspirated engines can have oil consumption issues regardless of the lack of a turbo. However, we recognize that turbo engines are prone to severe oil consumption and oil leak problems. The most obvious sign that oil leaks are occurring is dark oil puddles gathering underneath your car (aside from a newly lit dashboard light.) Drivers may also experience loss of power or acceleration when their Subaru EJ207 is experiencing severe oil leaks. The smell of burning oil and visible smoke emitting from the engine bay are also blatant signs that your engine is experiencing oil consumption problems. Camshaft seals, sparkplug tube seals, and piston access plugs may also be areas of concern.

Due to the wide variety of potential causes for high oil consumption in the Subaru EJ207, it is difficult to gauge repair costs. However, repairs for oil leaks on the Subaru EJ207 can range from $75 to $2000 plus depending on the parts needed and labor costs.

This issue most commonly occurs on heavily worn Subaru EJ20 engines or those that have been heavily modified. A knocking sound and potential rattling are most likely stemming from problems with the 4th cylinder. The fourth cylinder is the hottest within the engine, therefore making it the most difficult to cool down. The increased heat then causes the cylinder to knock. Drivers will likely experience engine knocking upon cold starts until the problem progresses to be more regularly occurring even after warming the engine up. Again, due to the variety of different causes for engine knocking, the repair costs can vary greatly. For example, a single spark plug replacement can cost five dollars, yet cleaning the engine heads can run you up to $800.

For more information regarding similar Subaru engine issues, check out our previous article on the most common Subaru EJ255 engine problems.

Subaru EJ207 engines are popular amongst the modding community. The stock EJ20 engines respond well to modifications, yet they do also experience high levels of stress when boosting power. It is essential for the EJ207 to have proper tuning when heavily modified. Without a good tune, gains in power will be greatly reduced. However, if properly in sync with a few of the common mods listed below, the EJ207 can greatly increase its overall speed and performance.

Proper modifications can boost the Subaru EJ207 to a significantly more reactive and speedy engine. They can also create a more sporty driving experience in terms of quicker acceleration, louder induction sounds, and exhaust volume. However, it’s important to remember that the EJ207, and most other engines, will become more fragile without the proper balance of supporting mods. The excess stress placed on the engine with boosted power modifications can cause engine damage and significantly reduce the engine’s reliability. Yet with a good balance of mods and a proper understanding of automotive mechanics, the EJ207 immediately becomes an exciting project for any enthusiast.

Most Common EJ207 Modifications and Upgrades

The EJ207 is very popular amongst Subaru enthusiasts due to its ability to respond well to modifications. This engine has become associated with many engine swap projects on YouTube and various car forums. Any modded engine or engine swap project requires extreme care for detail in regards to fitment, proper installation, and balance of supporting mods. With good mods and a good tune, one can expect a substantial increase in horsepower and torque as well as a longer engine lifespan. The most common mods include:

Some of the mods we listed can function independently, yet most require a proper tune. For example, a new intake can be installed independently without creating any damage to the EJ207 engine. However, when tuned, the power and performance benefits from a new intake can increase the full potential. Certain mods, like a new downpipe or exhaust, are much more dependent on a tune to even function properly. The fact that the Subaru EJ207 was not manufactured in the U.S makes the engine more difficult to find properly fitting parts for in America. The early WRX models are greatly appreciated for their response to upgrades and mods, some drivers boasting an increase of over 100 horsepower on their projects. However, like any engine, the Subaru EJ207 requires knowledge and patience to see a great increase in power without compromising reliability.

The Subaru EJ207 was utilized in the Japanese WRX models from 1991 to 2001 until succeeded by the EJ205. The engine is known for its performance capabilities and continues to live on through Subaru enthusiasts to this day. The respected performance and reliability make the EJ207 favored over the EJ257 for many engine swap projects as well. We find the Subaru EJ207 engine to be rated as average to above average in terms of reliability and longevity. Issues with oil leaks, engine knocking, and other needed repairs seem to be common for the EJ207 before reaching 60-80,000 miles. There aren’t many glaring flaws with this engine’s unique design; however, it lacks the reliability we would need to call this engine bulletproof.

However, many Subaru drivers report that the EJ207 engine is consistent enough to be their daily driver. The 207 is one of the more respected engines in the companies history and specifically within the EJ20 series. The EJ207 responds well to modifications yet requires high-quality oil and consistent maintenance. As you add more horsepower, the engine will require more supporting mods. It is essential for the EJ207 engine to be appropriately tuned for those seeking the ultimate boost in power and overall performance. With these upgrades in sync, the EJ207 can be an exciting and impressive engine project for any enthusiast.

Let us know in the comments below your experience with the Subaru EJ207 engine!