If you own a car chances are you’ve run into various problems and warning lights. Unfortunately, it’s simply part of car ownership; if you haven’t run into any problems then you’re one of the lucky few. One common light on modern cars is the reduced engine power warning. There are a number of different engine problems that can trigger this light, so it can be a confusing issue. Worry not, though. In this article, we discuss the reduced engine power warning along with common causes, symptoms, and fixes. 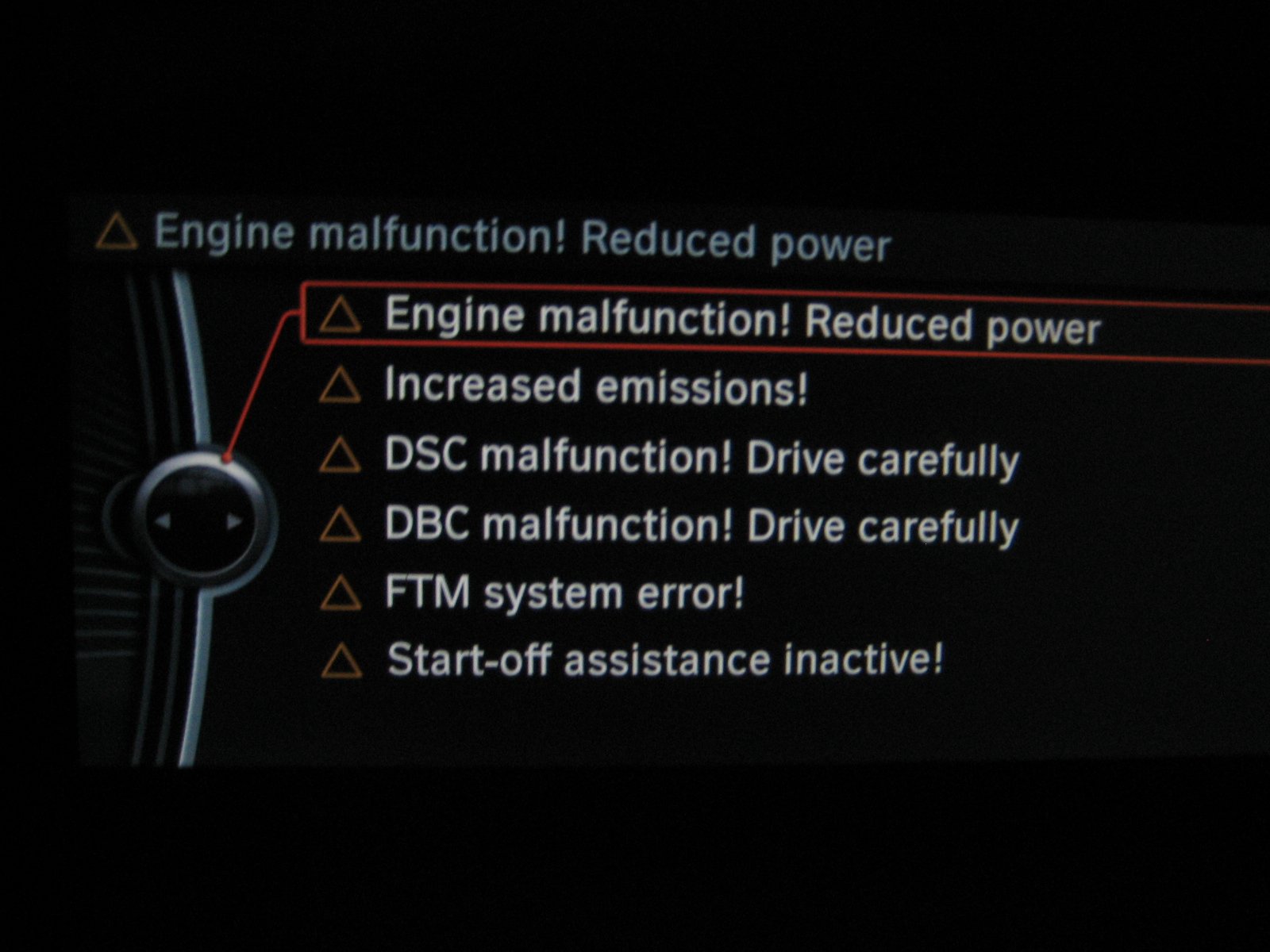 What is the Reduced Engine Power Warning?

The reduced power warning light is one of the more confusing lights on a car. It’s confusing since it can come and go without any noticeable issues. It also comes on for many various reasons. Lights like low oil, low coolant, and engine overheating are very direct; they basically tell you exactly what’s wrong. That’s not quite the case with this light.

One thing is clear – when the reduced engine power warning comes on your engine is operating with less power. Sometimes the light is triggered because the underlying issue is preventing the engine from making full power. Other times, the engine may be protecting itself from further damage. There isn’t an issue limiting power but operating with too much power might cause bigger failures, so the engine control unit (ECU) limits power output.

What Does Engine Power Reduced Mean?

Engine power reduced means your engines power output is limited. In most cases, the ECU is intentionally reducing the power of your engine. Your engine probably still could make maximum power. However, the computer limits power to protect itself from possible damage.

Ultimately, there are a lot of causes for the engine malfunction/power loss warnings. There isn’t a one meaning fits all except the fact the engine isn’t operating at maximum power output. Otherwise, there are many various causes and meanings of the light. In a couple sections, we’ll discuss the many various causes, diagnostics, and fixes for the reduced power light.

Can I Continue Driving?

One common question is, “Can I continue driving with a reduced engine power warning light?” That can vary based on the underlying issue. However, it’s generally best to pull over to a safe location as soon as possible and shut down the engine. Certain issues that trigger the reduced power light can be serious. Continued driving may lead to more severe issues.

For example, overheating is one possible trigger of the reduced engine power warning. If your engine is allowed to overheat for an extended period it could lead to costly failures like the head gasket.

On the other hand, some issues don’t put the engine or car at further risk. BMW’s engine malfunction states on the iDrive, “Engine operating at reduced output. Possible to continue. Drive with caution…” That’s the other aspect to consider. Driving with reduced power could potentially put you in dangerous situations.

In summary, in some cases you can continue driving with the engine power reduced warning. Use your own judgement, though. If something feels seriously wrong or dangerous then pull over in a safe location and have the car towed.

Almost all manufacturers have some form of this warning light. However, it may go by different names under different manufacturers. In many BMW’s, for example, the warning light states: Engine Malfunction Reduced Power. Anyway, this article is relevant to all these lights even though the specific message may be a little different for each brand.

Additionally, many modern cars offer more advanced warning lights thanks to large screens and better technology. You may receive other lights that help narrow down the cause of the reduced power warning. The reduced power warning is generic, so there are a lot of possible causes. It’s important to look for other engine lights or fault codes (using an OBD scanner) to narrow down the issues.

Unfortunately, the engine power reduced warning light typically means there is a problem with your engine. Causes vary widely and this engine light isn’t specific to just one or a few causes. Again, this isn’t a warning you should try to tackle blindly. Below are some common causes of the reduced output light, but this isn’t an exhaustive list.

You’ll need further diagnostics to narrow down the exact problem. This list should be a good starting point to diagnose the cause of the engine power reduced warning. Don’t just go wasting money and blindly replacing these parts, though. After we move thru the causes we’ll talk about diagnostics, repairs, and costs.

One potential issue that triggers the reduced power warning is related to the throttle actuator control (TAC) system. The TAC system uses electronics to control the position of the throttle blade. It eliminates the need for mechanical throttle cables, and performs cruise control functions. This system generally includes:

An issue with these parts can cause weird throttle and acceleration behavior. As such, the ECU will likely limit power output to avoid potentially dangerous situations. In turn, the reduced engine power light is triggered to inform you the car won’t operate at maximum output.

Most cars will have a separate engine light for overheating. However, some cars will also limit the power output and trigger the reduced power warning. As mentioned in a previous example, overheating can lead to additional issues. Limiting power helps prevent the engine from severely overheating very quickly.

However, without proper coolant flow, even idling the engine or driving at low speeds for an extended period can be risky. If you see the reduced power and overheating lights together then pull over in a safe location.

Issues with the fueling system can also trigger reduced engine power. If you engine isn’t getting enough fuel flow then you won’t have the full power output available. Common fueling issues include:

There are a lot of components within the fueling system. Any issue that reduces fuel flow can possibly trigger the engine malfunction reduced power warning. Many modern cars use direct injection and a HPFP, and they’ve been a problematic part on a number of these engines.

A lack of airflow or air delivery issues can cause the power reduced warning – similar to the fueling problems. Ultimately, engines rely on air and fuel to make power. If either one is missing or lacking then the engine will not produce maximum output. Some possible airflow delivery problems include:

These problems are generally cheap and easy fixes. Check the air filter and air box. A slightly dirty filter is unlikely to be the cause. However, if there is tons of debris in the box or filter that could limit airflow enough to trigger the light. A loose or damage intake pipe can may also be the culprit. Less likely, gaskets like the intake manifold gasket could leak enough air to trigger the engine power reduced warning.

The ECU on modern engines controls just about every engine function. It communicates with dozens of sensors, controls fuel flow, airflow, throttle position, ignition timing, abs, traction control and much more. Given its important, it’s easy to see why an ECU problem could easily trigger a reduced engine power light.

Depending on the scale and severity of the ECU problem you may also notice tons of other lights and issues. A severe ECU issue will likely light up most of the dashboard, and the engine might not start or be drivable.

It was mentioned earlier that fuel and air were vital to a cars performance and power output. However, that air-fuel mixture must be ignited. If the air-fuel mix doesn’t fully ignite and burn then the engine isn’t able to produce full output. As such, old and worn spark plugs or ignition coils can be culprits. You’ll often notice engine misfires if these parts are faulty. The ignition coil wiring is another potential cause.

Some other possible causes of reduced power warning lights include:

The above still isn’t a fully exhaustive list. This light isn’t a specific diagnostic trouble code (DTC). It’s a warning light that can be triggered by many different DTC’s, so there’s a wide range of potential causes.

That’s why it’s so important to use an OBD scanner before jumping to any conclusions. A specific fault code should help narrow down the issue causing the power reduced light. For example, you may see a fault code pointing to an issue with fuel delivery.

Diagnostics can be challenging with an engine light that has so many potential causes. Those less familiar with engines are likely best off going to a repair shop. However, there are some easy steps just about anyone can follow to narrow down the cause of reduced engine power:

Unfortunately, it’s hard to give a good breakdown on diagnostics when there are so many possible causes of reduced engine power. Ultimately, an OBD scanner should help point you in the right direction. From there, check all the basics parts or systems related to that fault code. If it isn’t something simple then diagnostics may be best left to a professional repair shop.

As with diagnostics and causes, the repair costs for reduced engine power can vary significantly. Sometimes it’s as simple as a loose hose or connection that can be fixed for free. Sometimes it’s something as complex as transmission problems that can cost thousands of dollars to repair or replace. Then there’s everything between the two extremes.

That said, most problems related to engine power reduced fall somewhere between those two extremes. Most issues that cause this light are roughly $100 to $1,000 repairs. Below is a quick breakdown (and rough estimate) of repair costs for common causes:

This is a short list of the dozens of different issues that may trigger the light. However, these are some of the common causes of reduced power and most issues are less than $300 to fix. Some unlucky few will have more severe causes, though. Others will have simple fixes that are $50 or less