The Ram 1500 is one of the most iconic trucks in American history. It first debuted in 1981 and got the coveted 5.7L HEMI two decades later in 2003. The 2003 Dodge Ram 1500 with the 5.7L HEMI boasted 345 hp and 375 lb-ft of tq, and was a huge success when it came on the market. Enthusiasts loved the raw power and towing capacity of the Ram 1500, and the 5.7L HEMI was more than capable of delivering on-demand power at all times. We’ve looked at general headers for the 5.7L HEMI before, but this article is about headers specific to just the Ram 1500. Headers are a great power upgrade, and they come in both short and long-tube versions. 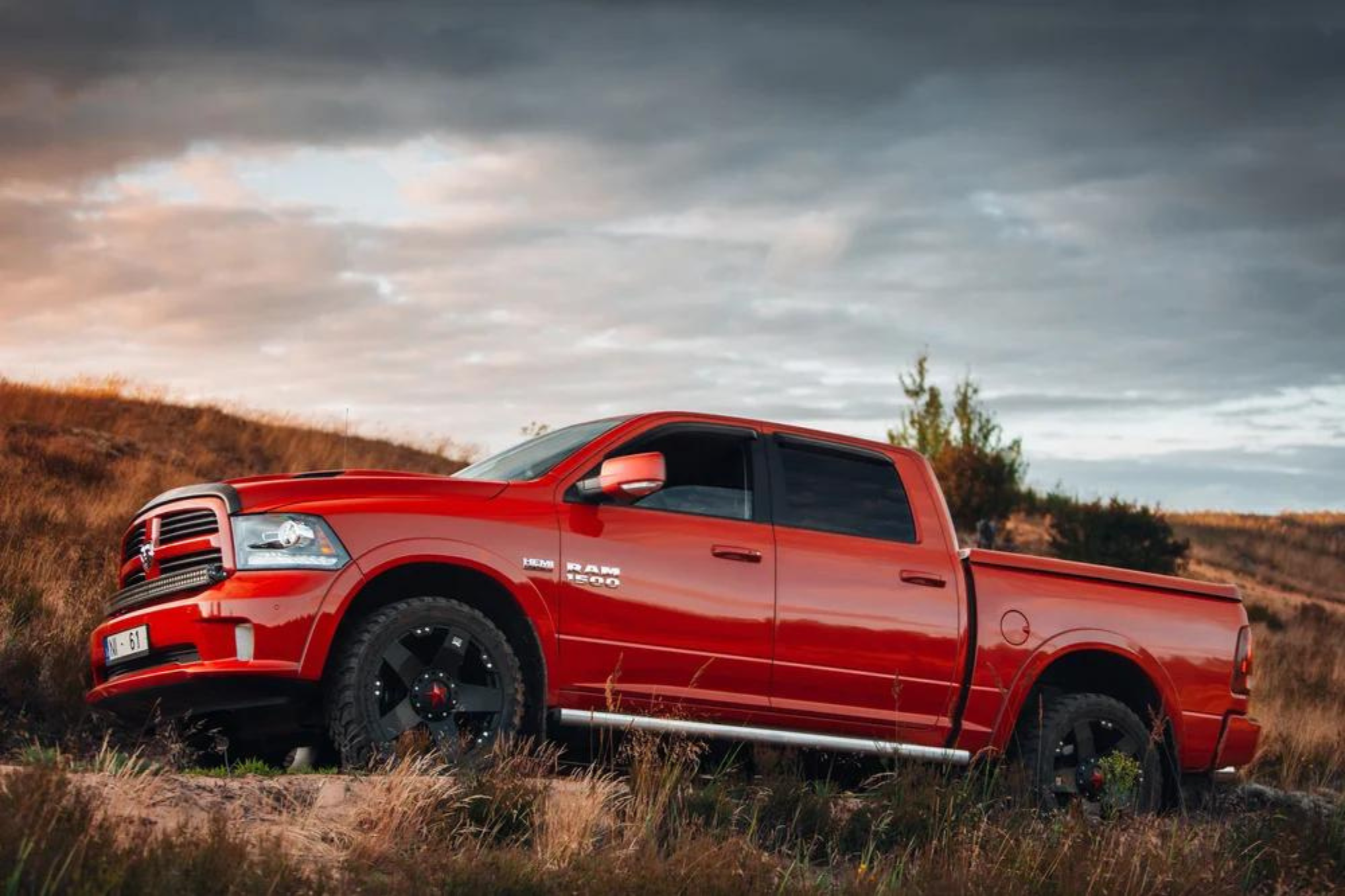 Headers are the part of a car’s exhaust system that connect directly to the engine. In their stock form they are known as exhaust manifolds, and the term headers typically indicates an aftermarket piece of equipment. They are generally reserved for enthusiasts looking to increase the power output of their engine.

Headers collect the hot gasses being pushed out of the engine and direct them into the exhaust system. Due to its location – being the first contact for exhaust gasses – its design and construction are incredibly important. For stock power levels and applications, the OEM exhaust manifolds are typically capable of adequate performance. However, for anyone looking to increase performance or get the most out of their bolt-ons, headers become very important.

In a nutshell, that’s the basic idea behind headers and header upgrades. Next, we will look at the two types of Ram 1500 headers, long-tube and short-tube. Then we will explore their benefits and look at the top recommendations.

There are two types of aftermarket headers that are commonly available for the Ram 1500, long-tube headers and short-tube headers. As their names suggest, the primary difference between the two of them is their length. Long-tubes are much longer and extend further back than short-tubes. Long-tube headers will promote quicker exhaust flow out the tailpipe and will improve scavenging.

On the Dodge Ram 1500, the catalytic converters are located in the y-pipes (some people refer to them as mid-pipes). This is important for long-tube headers, because they replace part of the y-pipes on the Ram 1500. This means that long-tube headers will not bolt directly to the rest of the factory exhaust without modification. Users who buy long-tube headers should consider buying a corresponding y-pipe and cat back if available for best fitment.

With 5.7L HEMI long-tube headers, users have the option of either going catless or having high-flow cats. It is important to keep in mind that catless exhausts are only meant for off-road or competition use. Therefore, users will not pass emissions inspections with catless headers. High-flow cats are generally emissions compliant, though some users have reported failing emissions testing with them. Shorty headers are the only headers that will not remove any emissions equipment.

Short-tube headers are direct bolt-in replacements and do not replace the y-pipes on the Ram 1500. They are the easiest to install and require no modifications to fit.

A pair of Ram 1500 headers will give gains of 10-25 whp and 5-20 wtq. Before we look at power improvements, let’s look at some of the other gains from header installs.

One of the biggest advantages of Ram 1500 header upgrades is reduced back-pressure and increased scavenging effectiveness. OEM manifolds are only as effective as necessary for stock power levels and are made as cheap as possible. Aftermarket headers reduce back-pressure and increase scavenging at higher than factory power levels. Reducing back-pressure lowers EGTs and increases scavenging, which is great for sustaining power. Increased scavenging and reduced reversion means exhaust gasses are removed quicker and more clean air can enter the combustion chamber. This leads again to bigger and more sustained power.

Another feature of header upgrades is the change in exhaust volume and tone. Aftermarket headers will increase the volume of one’s exhaust, and it will also create a raspier and more guttural and aggressive tone. Long-tube headers exacerbate both effects more than short-tube headers. The difference is most notable under wide open throttle and on cold starts, but even at idle the change is generally noticeable.

Now, let’s get back to the most important part about Ram 1500 header upgrades – the power increases. As mentioned before, long-tube headers will typically give gains of 10-25 whp and 10-20 wtq. ECU calibration is highly recommended for any header upgrades on the Ram 1500 to maximize power gains.

Long-tube headers will provide more power throughout the rpm range over shorty headers on the Ram 1500. This is partly because short-tube headers still retain the restrictive factory catalytic converters. Short-tube headers will give a little more “oomph” on the low-end, but at the expense of top-end power. Other upgrades, like intakes and cat back exhausts, will also help to increase overall flow on the 5.7L HEMI.

Headers are a great upgrade for getting extra power and volume out of an exhaust. They are great when coupled with aforementioned mods like intakes and cat backs. Enthusiasts can really tailor their exhaust note to their choice by exploring all of the different combinations.

Now that we have a good understanding of what headers are and why they are important for the Ram 1500, it is time to look at some recommendations. This list is not aimed to be exhaustive or comprehensive, as there are so many options out there. In addition, not all exhausts fit all truck model years, so make sure you double check both before you purchase.

It is always a great idea to purchase new OEM gaskets when installing new headers on the Ram 1500. It is not advisable to reuse old ones under any conditions as they are prone to breaking and leaking.

This list is meant to be a look at the top practical Ram 1500 headers available on the market today. The list has both long-tube and short-tube headers, keeping in mind a variety of budgets, setups, and power goals. Let’s look at the top-five header upgrades for the Ram 1500’s 5.7L HEMI, in no particular order.

Price-wise, the ARH long-tubes are going to set you back a bit, but you are definitely paying for quality. They produce an aggressive tone and buyers can pair them with an ARH cat back for optimal fit, performance, and sound.

Stainless Works’ Ram 1500 Classic Long-tube Headers are our second entry on the list. They are another top-option for the 5.7L HEMI and provide fantastic performance. Users can expect 10-20 whp from these headers as well as fantastic and aggressive tones.

The Stainless Works Ram 1500 headers are on the more expensive side for headers, but they are definitely worth it. They come in two configurations, the most popular is a y-pipe that merges both primaries into a single exit. The other is an x-pipe that offers a true dual exit and connects to the Stainless Works’ cat back.

They are manufactured 100% in the U.S. and offer either 1-¾” x 3” or 1-⅞” x 3” primaries. They are highly regarded for the Ram 1500 for their excellent fit and incredible craftsmanship and welding. The Stainless works are only available as a high-flow cat option. Another top-shelf entry, but again at top-shelf prices.

The JBAs won’t give you the performance of the Stainless Works or ARHs, but you can still see good gains. Users can expect 8-20 whp and 5-15 wtq after installing these headers on the Ram 1500.

Reviews on the JBAs are generally positive, though some people report issues with fitment and quality. Some people love them and have run them for 100,000s of miles, while others have had less fortunate experiences. We still recommend them, as they have shown to be quality headers overall. 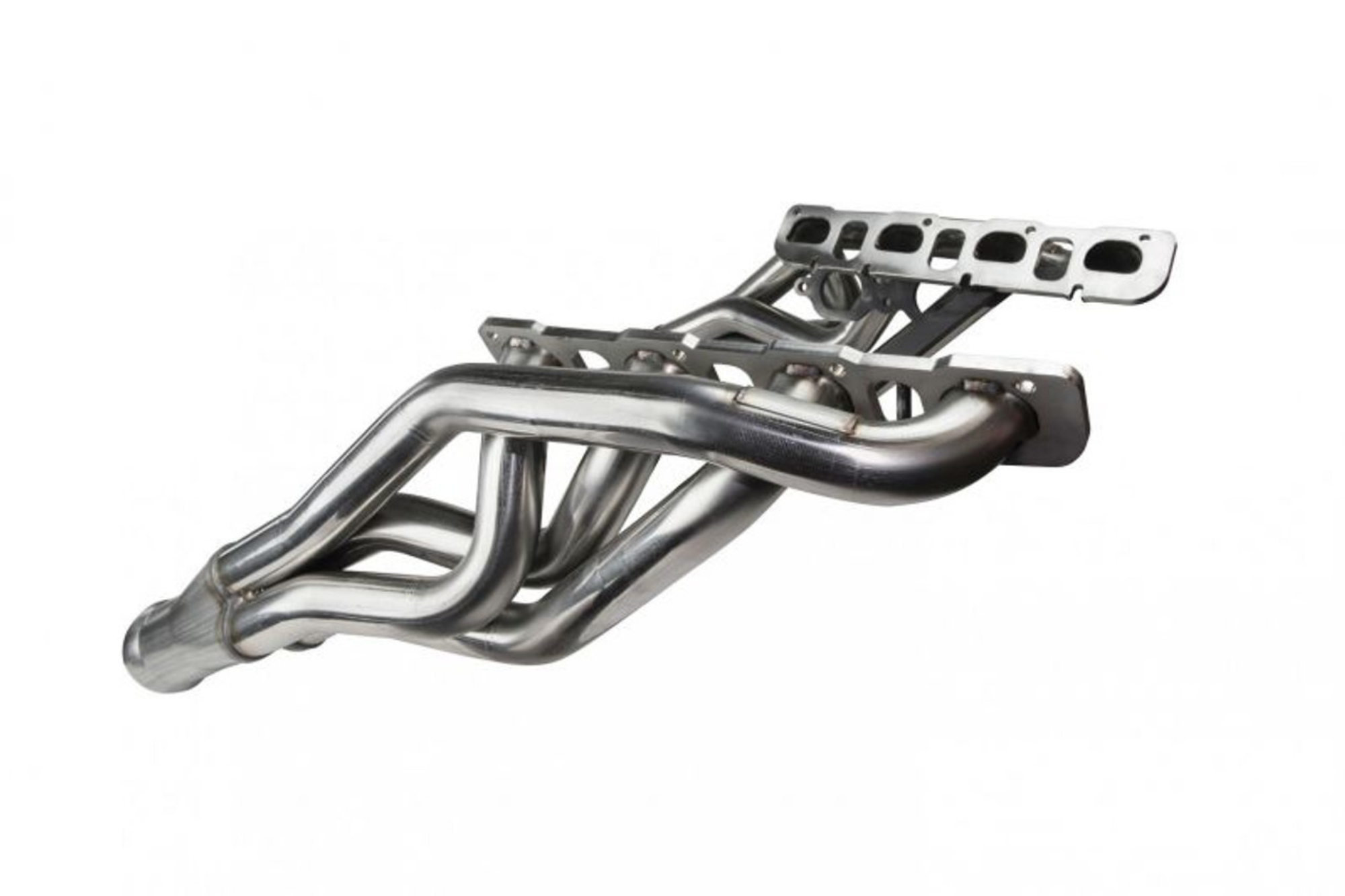 Our fourth entry on the list are the Kooks Headers Ram 1500 Stainless Long-tube Headers. Kooks has been offering performance exhaust systems for decades and are well known in the industry.

Price-wise these headers can be deceiving. The long-tubes by themselves are $1750.62, but they do not come with a y-pipe like the ARHs or Stainless Works. The additional high-flow catted y-pipe is $1,768.28. This makes this full long-system by far the most expensive, though the catless y-pipe is less at $1,018.35. Without the y-pipe welding and modification will be necessary.

Users can expect 10-20 whp and 5-20 wtq after putting these long-tubes on. The welding and craftsmanship is top-notch as expected, and fitment should be second-to-none. The entire system is 304 S/S and is 1-¾” x 3”.

The final entry on our list is the Gibson Performance Exhaust Ram 1500 shorty headers. The main reason these are on the list is they are one of the few available for the pre-2009 model years.

Being short-tubes, the performance will not compare with the other entries on the list. However, they can still be capable of some noticeable gains. Users can expect a bump of 5-10 whp and 5-8 wtq after putting these on.

Gibson short-tubes are direct fits and attach snugly to the OEM crossover pipe. In addition, these are also CARB compliant, making them a great choice for those needing to pass those strict regulations.

Headers are an important upgrade for Ram 1500 owners looking to get the most performance available out of their vehicle. Not only will they add power throughout the rpm range, but the reduced back-pressure will aid scavenging and reduce reversion. Your exhaust tone will also become more lively and aggressive, matching the distinctive characteristics of the 5.7L HEMI engine.

Header upgrades can net 10-25 whp and 5-20 wtq on the Ram 1500. Tuning gives users the most bang for their buck, and should definitely be used in conjunction with any header upgrade. Long-tubes will as much as double the horsepower as short-tubes, but they also run afoul of emissions regulations if they are catless.

Each of these headers are great potential upgrades for the Ram 1500. The ARH, Kooks, and Stainless Works are all relatively similar in terms of build and performance. The real difference comes in how they sound and of course their vastly different prices. The JBAs are a good budget option for those looking for some volume and mild performance increases. Finally, the Gibsons are a great CARB compliant shorty option for pre-2009 models.

What’s your experience with Ram 1500 headers? Are you considering any?