There is a specific purpose for any part or fluid within an automotive engine. Many are familiar with the typical stuff like spark plugs, cylinders, pistons, etc. However, the PCV system is a topic that doesn’t come up often. It’s very important emissions equipment, but also has several other benefits to engine health. So, what is a PCV valve? How do PCV valves work? What are the symptoms of a bad valve? In this article, we examine the PCV system, answer these questions, and dive into other helpful info.

What Is the PCV System?

The PCV systems goal is to re-route these gases to the intake tract where they mix with fresh intake air and go through the combustion process again. Re-routing blow-by gases helps reduce emissions. It was actually among the first emissions control devices with California requiring them in 1961. Within a few years most new cars in the US featured a PCV system. They then quickly became standard worldwide on automotive engines.

Part of its rapid implementation was due to emissions. However, PCV systems also help keep the engine internals clean by removing blow-by gases before they form sludge or carbon build-up. Additionally, the positive crankcase ventilation system keeps oil cleaner and increases oil life-span.

How Does A PCV Valve Work?

To understand how the PCV valve works it’s important to layout the basics of the crankcase ventilation system. Most engines use the following parts for the PCV system:

In essence, the PCV valve applies the necessary vacuum to remove blow-by gases from the crankcase. It actually controls the the flow – or the amount – of crankcase blow-by gases entering the intake. Nothing too complicated. However, it’s an incredibly important part that can cause a handful of issues if it fails.

On almost all engines you can replace the positive crankcase vent valve without removing the valve cover. The hose should simply pop off and the valve can then come out. It’s usually designed to be a fairly easy, straight-forward repair. We’ll circle back to this in the topic about replacing the PCV.

Symptoms of a bad PCV valve on an internal combustion engine include:

This isn’t a completely exhaustive list, but these are some of the main symptoms of bad PCV valves. The above symptoms also do not always point to the PCV valve. For example, a gasket failure and oil leak may just be a problem of its own outside of the PCV system. Nonetheless, given the importance of the PCV system it’s important to consider the possibility that there’s an issue.

When the valve fails you may have high crankcase pressures. That pressure will try to escape somewhere, which can cause seals or gaskets to fail due to the pressure. Oil leaks can then begin or oil may simply seep past the seals or gaskets even if they don’t totally fail. High pressures also cause whistling noises from the engine, which is one of the most common symptoms.

Sludge build-up is another concerning issue as the blow-by gases will stick to internals and for deposits. It’s an ugly sight and doesn’t help engine operation or performance. Another symptom of a bad PCV valve is high oil consumption. It can also reduce oil quality as blow-by gases mix with engine oil. Misfires and rough idle are less common, but do happen sometimes.

PCV valves are considered maintenance items. They are, after all, subject to a lot of blow-by gases traveling through them which can sludge the valve up. As such, most manufacturers make them easy to access and replace. Again, it’s often on the rear of the valve cover where you see a hose running to the intake manifold. The PCV valve will be inside that hose typically attached right at the connection to the valve cover. Some simply attach to the hose rather than lying inside.

Anyways, replacing the PCV valve on most engines is as simple as the following:

The valve usually runs about $10-30 and most people willing to DIY shouldn’t have any trouble replacing the PCV. Sometimes it can be a tight area to work, though. If you end up at a repair shop then PCV replacement can add about $50-100 of labor to the bill.

When to Replace the Valve

Exact replacement interval can depend upon many different factors. Some manufacturers recommend replacing the valve as often as every 30,000 miles. Others don’t have very strict guidance making it difficult to know when to replace the PCV valve.

If you’re noticing any symptoms of a bad PCV and know the valve has never been replaced then it may be a good time to do it. However, some PCV valves do function well past 100,000 miles. It might not be worth the time and cost if your valve is in good working order. It’s still a good idea to test the positive crankcase ventilation valve, especially if your engine is older and high mileage.

How to Test the PCV Valve

Fortunately, the positive crankcase ventilation valve is easy to access on most engines. That makes it easy to test its functionality. A few methods to check the health and operation of the PCV valve include: 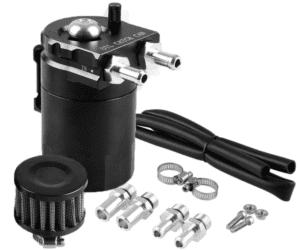 Oil catch cans and PCV system topics are becoming more common in the modern world. This is because many engines are switching to direct fuel injection. When the blow-by is recirculated into the intake manifold it can cling to intake ports and valves. It then forms deposits known as carbon build-up, which is a problem on many direct injection engines. Port fuel injection sprays fuel into the intake ports; the fuel then wipes away any deposits. However, direct injection doesn’t have that benefit since fuel is sprayed directly into the cylinders.

Anyways, the idea of the oil catch can (OCC) is to attach to the PCV system. It then filters out the oil vapors to slow the process of carbon build-up on intake valves. Catch cans aren’t 100% effective, but they do have some benefits in at least slowing the process. We’ll leave it there for now and follow up with a more in-depth post regarding oil catch cans in the near future.

Positive crankcase ventilation valves aren’t a topic you hear about every day. However, it’s an incredibly important part of your engines emissions control systems. PCV valves also have other benefits like keeping oil clean and preventing sludge build-up on engine internals. PCV systems are great when they work, but can cause many headaches when they fail or lose effectiveness.

Symptoms of a bad PCV valve are fairly extensive. However, continuous oil leaks caused by gasket and seal failures are a common symptom. As pressure builds up in the crankcase it looks to escape through seals and gaskets. That can cause them to fail and leak oil. Whining is another one of the most common symptoms of bad PCV systems.

Fortunately, a PCV valve is usually designed to be inexpensive and easy to replace. There are a few methods of testing PCV function if you’re unsure whether or not to replace it. In essence, PCV valves are an important part of an engine maintenance schedule and should not be overlooked.

What Does PCV stand for?

What is the Purpose of a PCV System?

They were actually originally designed to allow military craft to travel through water to help ensure a tight seal on the engine. However, the purpose of a PCV today is to reduce harmful emissions. PCV systems also have the added benefit of improving oil life and keeping engine internals clean.

What are the Symptoms of a Bad PCV Valve?

There are a lot of potential symptoms of bad PCV valves. Seal or gasket failures, oil leaks, whining sounds, and higher oil consumption are a few of the most common symptoms. Refer to bad PCV valve symptoms section above for additional info.

How Expensive are PCV Valves?

How Do You Replace a Bad PCV Valve?

Replacement on most engines is very simple. Locate the hose at the back of the valve cover, remove the valve, and install the new one. Labor at a repair shop may be in the $50-100 ballpark on most engines.