Engine fault codes are sometimes referred to as diagnostic trouble codes or abbreviated as DTCs. P1014 is a common DTC for a number of vehicles from a variety of manufacturers. Depending on the make and model of your vehicle, a P1014 code can mean a number of things. This guide will dive into the P1014 DTC, explain what it means for your particular vehicle, and discuss some of the most common remedies.

No matter the engine, fault codes are a normal part of car ownership. As engines and related components age, issues arise more commonly. Engine codes exist to give you a better understanding of potential issues occurring in the drivetrain system. This allows you to be able to pinpoint the problem more easily instead of through a trial and error process.

While the P1014 code appears to be a collection of random letters and numbers, there is a rhyme and reason for each digit. Breaking the code down into its individual digits can help clarify the code a bit.

The ‘P’ that precedes the numbers in the code represents a powertrain fault. All codes that begin with ‘P’ signify a powertrain fault of some sort. The following ‘1’ digit is manufacturer specific and doesn’t carry any significant meaning. The ‘0’ represents the accelerator pedal position sensor, indicating that there might be an issue in that respect. The second “1” in the code is related to the brake booster vacuum sensor and a potential issue related to that component. Finally, the ‘4’ represents the transmission, signifying that a possible transmission issue has occurred. 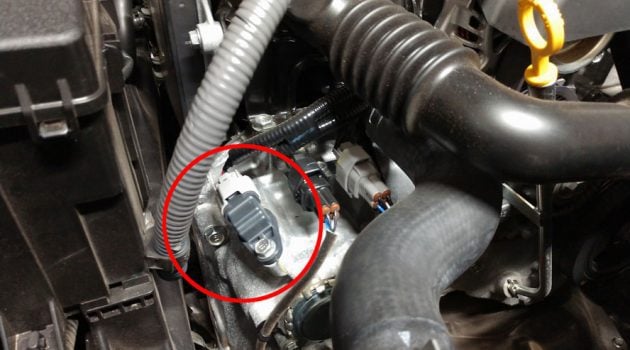 As with almost any engine code, the P1014 DTC can be caused by quite a few internal faults within your vehicle. The meaning of the code also varies depending on your car’s manufacturer. The P1014 is a common code amongst Chevrolet, GM, Buick, and Dodge vehicles. It is also commonly seen on BMWs, Minis, Suzukis, and Volvos. Despite being the same code, it means something slightly different for foreign manufacturers than domestic manufacturers.

If the Valvetronic eccentric shaft position sensor is of poor quality, not installed to factory specifications, or is failing, the P1014 code will present itself. This is the case for all BMW and Minis that utilize the Valvetronic system.

The situation is very similar as far as Volvos are concerned. In the case of a Volvo P1014 engine code, the vehicle’s ECU is not receiving proper signals from the camshaft position sensor, or CKP as Volvo calls it.

Since the P1014 code can be caused by so many different problems, the symptoms associated with it also vary quite a bit. If your vehicle is displaying a P1014 DTC, here are some of the associated symptoms:

All of the above symptoms are emblematic of a camshaft timing issue or an improper reading from the camshaft position sensor. They can also be caused by low engine oil or low oil pressure which would cause issues within the camshaft management system. If the code is triggered during startup but the sensor begins reading correctly during driving, it is possible that no noticeable symptoms manifest. That doesn’t mean that there isn’t a problem though.

P1014 symptoms can dramatically vary in severity depending on what is triggering the code. If the camshaft position sensor is providing dramatically incorrect readings, the engine would likely misfire quite a bit.

Depending on the cause of the P1014 DTC, it can vary in severity from low to moderate. In quite a few cases, fixing problems associated with a P1014 code can be simple. Other times, your vehicle might need to have sensors replaced, which can be a more involved task.

Obviously, the need to remedy the issues associated with a P1014 DTC are dependant on how serious the symptoms are. Pronounced engine misfires, which can be caused by P1014-related problems, are a sign that the vehicle should be inspected right away. If you delay getting your vehicle inspected while serious symptoms persist, serious damage can be done.

As we have already covered, the P1014 code can be caused by quite the array of potential issues. The most common causes are the following:

In this section we will discuss diagnosing fault code P0102 when it’s the only code present. Anyways, to diagnose DTC P0102 start with the following:

The first step of this procedure is imperative in ensuring that the P1014 code wasn’t caused by a one-off issue. By resetting the code, you can ensure that the code is true if it reappears.

If your vehicle is displaying a P1014 DTC and has a camshaft position sensor solenoid, you can try to save yourself some money by cleaning the external screens of the solenoid.

As we have covered already, the P1014 code has a few potential causes. For that reason, the fix for the code can vary dramatically. If the code comes on in conjunction with a P0524 DTC, typically indicating low oil pressure, additional diagnosis will need to be performed to find out what is causing your vehicle to have low engine oil pressure.

If the code is not engine oil-related, it is likely that one of your camshaft position sensors has failed or is in the process of failing. This is a more involved job than a simple oil top-off. However, it is possible to replace the sensors on your own if you have some technical experience.

The repair cost for a P1014 code is once again dependent on the issue that triggered it. Listed below are some of the associated costs with the most likely causes of a P1014 code:

All of the costs listed above are also dependent on what tools, resources, and help you have at your disposal. Once again, a P1014 fix can be a relatively easy and inexpensive job if you can do it on your own. However, if you aren’t mechanically savvy or don’t believe that you’ll be able to perform the repair properly, it is worth spending the extra money to have it professionally sorted.

This is typically not an expensive issue to fix even if you take your vehicle to a certified repair center. Unless there is a serious underlying issue that is causing low oil pressure, a $300-$350 bill is what you should expect.

Most of the information covered in this section has been answered above. This section serves as a brief recap.

For most domestic manufacturers, made in the USA, code P1014 means that there is an issue with the exhaust camshaft position actuator. For BMW and Mini, it typically represents an issue with the Valvetronic eccentric shaft position sensor. Typically this is triggered by low engine oil or low oil pressure failing to engage the CPS actuator’s locking pin upon startup.

If the vehicle has an adequate amount of oil and doesn’t display low oil pressure, the camshaft position sensor is likely to blame. Make sure that the CPS sensor is connected properly or that the correct sensor is installed. You can attempt to clean the CPS actuator solenoid with intake cleaner. Otherwise, a replacement of the CPS might be necessary.

Of course, use your judgment. If your vehicle begins to feel unsafe to drive or if the symptoms worsen, it is a good idea to stop driving the vehicle until you have the opportunity to repair the problem.