Nissan’s VQ37VHR engine was released in 2008 and is still in production today. It is a naturally aspirated 3.7L V6 which produces 325-350hp depending on its application. The VQ37 was built off of the VQ-HR engine series, most known for the VQ35HR which was predominantly used in the Infiniti G35 and ‘Rev-Up’ 350Z. In this article, I discuss Nissan VQ37VHR engine problems, reliability, specs, and more. 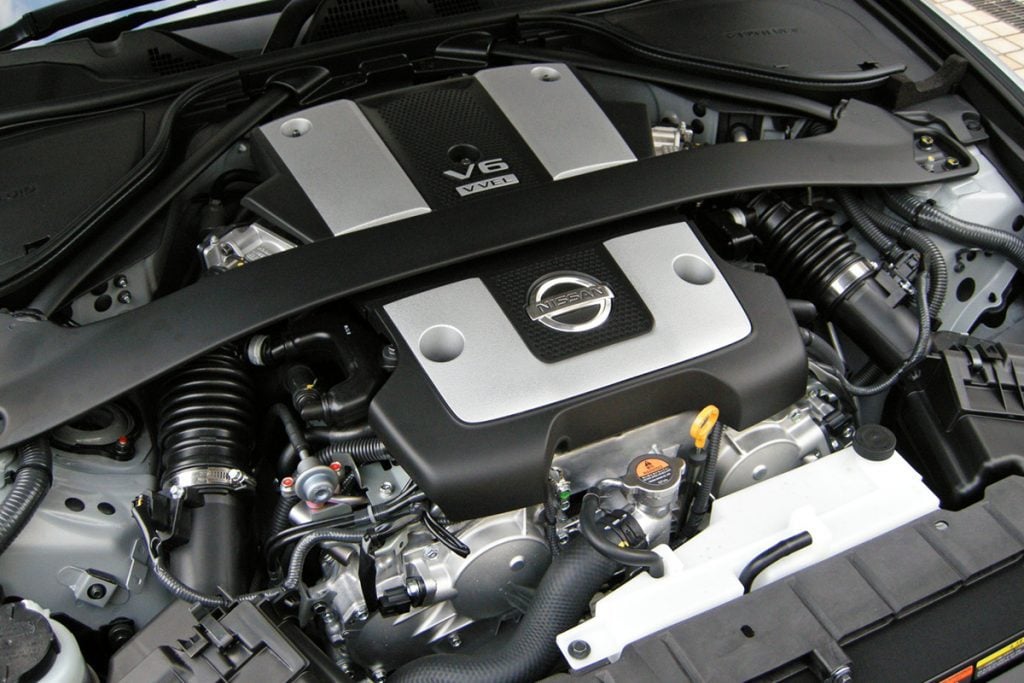 Specs for the Nissan VQ37 engine include:

Over it’s 12+ years of production the VQ37 engine has received a number of minor updates. However, power levels have remained constant through its production history. While these power numbers might not feel as stout as they were back in 2008, the VQ37VHR is still quite power capable.

The VQ37VHR was the first production engine to use Nissan’s variable valve event and lift, also known as VVEL, technology. VVEL is a variable valve timing technology, similar to BMW’s Valvetronic or Toyota’s Valvematic systems.

With a forged crank and rods, the VQ37VHR is capable of producing around 600-650whp before internal upgrades are needed. Albeit given the VQ37 is naturally aspirated, basic bolt-on modifications usually won’t provide any crazy power gains. Reaching serious power levels will require the addition of forced induction.

What Cars Use the VQ37VHR?

As mentioned, this engine has had a number of small improvements made over the years. Generally speaking, these common engine problems will be less common on newer cars simply due to age and mileage. A few of these problems have been corrected over the years so we’ll do our best to point out which model years cars are affected by which problems.

The most common Nissan VQ37VHR engine problems are:

In the rest of the article I will break down each of the above VQ37 issues in greater depth. The fact these are common problems doesn’t mean every engine and owner will experience them. Additionally, the VQ37VHQ may run into problems that are not discussed in this article.

The VQ37VHR engine has two oil galley’s that sit inside the timing chain cover and in between the block. These galleys are responsible for flowing oil through the timing chain system. There are two gaskets, a “T” shaped and an “L” shaped gasket that seal the cover to the block.

Both of these gaskets commonly fail on 2012 and prior engines. The failure is caused by a poor gasket design which was revised by Nissan in 2012. However, it is not known exactly when in 2012 the new gasket design was implemented, so the problem can still happen to 2012 models as well.

When either of these gaskets fails it causes a drop in oil pressure. The drop is usually immediate and doesn’t come with any pre-existing warning signs. When the oil pressure drops it will send the car into limp mode and usually throw P0011 and P0021 engine codes.

If you experience a drop in oil pressure you need to shut your engine off immediately and get it towed. Driving on low oil pressure even for a few seconds can cause catastrophic internal engine damage.

Unfortunately there isn’t usually a warning sign that this problem might develop. It happens rather instantaneously which is why you need to always stay cautious of oil pressure and be ready when it might happen.

There are also a number of other potential symptoms you might have when this happens. If your timing chain fails it can throw engine timing off causing serious misfires, rough idling, etc. Additionally, if the internals run without proper lubrication you will likely hear some knocking noises coming from the engine. You will experience power loss, lack of acceleration and various other performance issues. However, if you run into these other problems it is likely a sign that you have incurred some internal damage.

If these gaskets fail, the only option is to replace them. We’ve seen quotes just to replace the gaskets ranging anywhere from $1,600 to $3,500 depending on whether it’s an indy shop or the dealership. If you experienced other engine damage then you might be looking at a total rebuild or a replacement engine.

Due to the commonality of this problem and the serious damage it can cause, a number of VQ37 owners replace them before the problem occurs. You can buy the updated oil galley gaskets for like $35 and have them installed by pulling the timing cover.

Catalytic converters are the primary emissions reduction system on any car. They sit within the exhaust system and convert hazardous nitrogen oxide into pure nitrogen and water via chemical reactions. The internal workings of a catalytic converter include rare earth metals such as palladium, platinum, and rhodium. When the exhaust gases come in contact with these metals it causes a chemical reaction that breaks down and cleans up the gases.

We have seen catalytic converters clog as soon as 75,000 miles on the VQ37. However, this is most common on older engines and isn’t as likely to happen on newer model years with those mileage levels. The most common cause of clogged cats is high engine temperatures. Make sure your cooling system is performing properly and never drive your car if it’s starting to overheat.

When the cats become clogged it creates a ton of backpressure and forces exhaust gases back into the combustion chamber. When this happens it throws off the air to fuel ratios and will result in misfires and overall poor performance and idling.

If your cats are clogged they will need to be replaced. First off, you will fail an emissions test. Secondly, it will cause some performance and general drivability issues.

Your two options are replacing the cats with an OEM replacement, or replacing them with aftermarket cats. With aftermarket, you have the option to use an improved high-flow catalytic converter or to go catless and use test pipes. Both high-flow and catless options will provide a performance benefit over the OEM system, usually in the range of about 5hp. Just note that while catless options will provide more power gains they are also illegal and will cause you to fail emissions.

Water pump failure is more of a common maintenance item versus a common problem on the VQ37VHR. Water pumps circulate coolant throughout the engine via pressurization. Because the pump is highly pressurized its internal components are prone to wearing down and deteriorating inside. Additionally, because it has internal metal components it also needs oil lubrication.

Water pumps have internal seals where failure is most common. Additionally, it has what is called a weep hole or vent hole. The vent hole serves as a warning for water pump failure and allows coolant and oil to drip out from it. When the oil seal inside of the pump starts going bad, oil will start leaking from the weep hole. When the internal water pump seal starts going bad, coolant will leak from the vent hole.

In either of these scenarios, the water pump itself will need to be replaced. If the internal seals fail it can cause oil and coolant to mix which will cause serious collateral damage.

On the VQ37 engine, the water pump usually goes out around the 100,000 mile mark. Again, this is more of a common maintenance item rather than a common problem. Water pumps naturally fail over time. Just make sure you don’t drive on a broken water pump which can cause overheating.

Similar to its VQ35DE predecessor, the VQ37 is also prone to excessive oil consumption. High oil consumption usually develops over time and is more common on older and higher mileage engines. Fortunately, the oil consumption issues don’t appear to cause any issues with reliability or engine longevity.

These engines are known to consume about 1qt of oil for every 1,000-2,000 miles of driving. While this doesn’t cause any serious issues it’s important to always monitor oil levels. We recommend keeping a quart or two in your trunk to fill up as needed.

Overall, the VQ37VHR engine is a very reliable engine. With a forged crank and rods the engine is capable of handling some pretty serious power levels. Considering the stock engine produces about 50% of the horsepower that the block and major engine components can handle, it’s unlikely to experience any issues with these components.

2012 and prior models tend to be slightly less reliable due to the oil galley gasket failure. 2013+ models are extremely reliable and don’t really suffer any worrisome common problems.

So far the VQ37VHR seems to be reliable and capable of handling 200,000+ miles. Keep in mind a handful of typical common maintenance items will appear such as water pumps, gaskets, hoses, etc.

Generally speaking, outside of the galley gaskets, all of the problems we mentioned are rather minor and won’t cause engine failure or expensive repairs. With 350hp and virtually zero problems, the VQ37 engine is a fantastic performance motor. Just keep in mind that adding forced induction and other modifications will take a toll on engine longevity and likely result in some more maintenance items popping up more frequently.

How has your experience with Nissan VQ37VHR reliability been?