The Nissan 350Z & Infiniti G35 made their original debut with the VQ35DE 3.5L V6 engine. In 2007, Nissan introduced the VQ35HR engine for the final years of the 350Z and G35. Then came the VQ37VHR 3.7L V6 for the newer 370Z & G37 models in 2009. Despite these engines sharing the same VQ engine family there are some major differences. In this guide, we compare the VQ35HR vs VQ37VHR engines including specs, performance, reliability, and more. 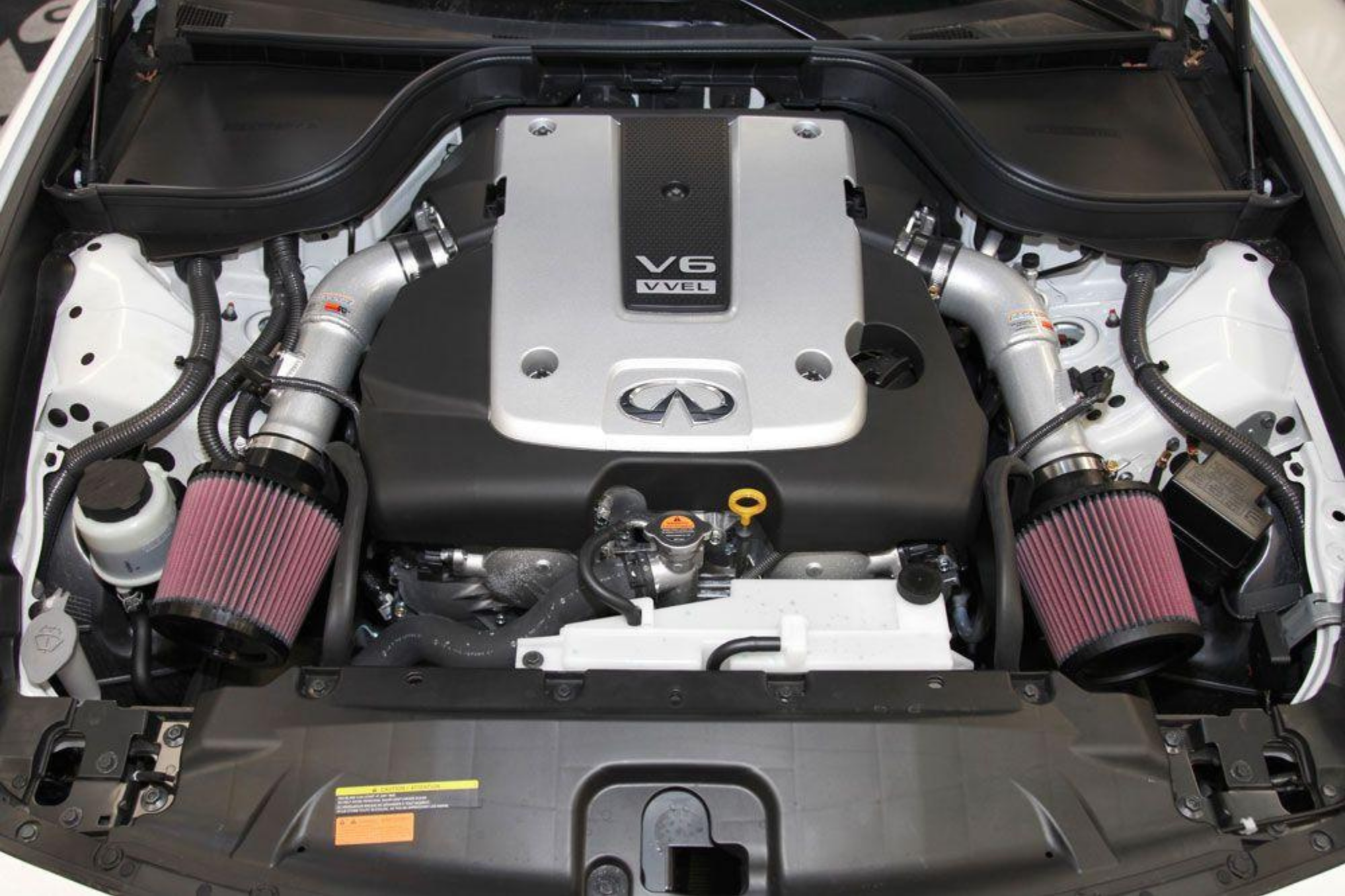 VQ engines from Nissan are in a plethora of years and models. They began production in 1994 and the VQ engines are still found in some models as of 2021. The VQ engines all share the same general V6, aluminum, DOHC design. However, displacement ranges anywhere from 2.0L up to the 4.0L VQ40DE.

Of course, the VQ engines as a whole aren’t our main focus here. We’re specifically looking at the Nissan VQ35HR vs VQ37VHR. We’ll also include some info for the older VQ35DE engines to tie everything together. That said, let’s lay out some of the basic details for these three VQ engines.

Again, the original VQ35DE isn’t our main focus of this article. It does, however, help wrap everything together when it comes to the VQ35HR vs VQ37VHR engines. Anyways, the VQ35 made its debut in the 2002 Nissan Altima. It’s in the following years for the 350Z and G35:

Nissan took the VQ35 a step further with the release of the VQ35HR engine. It shares the same base design in being a 3.5L V6; the engine block and a few other things remain the same. However, the HR variant uses around 80% newly designed parts so it’s a very different engine. It’s in the following Z and G35 years:

HR stands for high-revving and this VQ35HR does exactly that with a 7,500 RPM redline. Compression increases to 10.6:1 along with tons of internal engine updates to handle the extra revs. Overall, the VQ35HR is built to be more powerful, fuel efficient, and emissions-friendly than the older engine.

One major change moving to the 370Z and G37 is the use of a 3.7L V6 engine. If you haven’t guessed by now the numbers in the engine code represent displacement. The car badging also represents the same. Anyways, Nissan went with a bit more displacement from this engine. You can find the VQ37VHR in the following:

This engine shares about 65% of its parts with the previous VQ35HR engine. Only about 1/3 of the parts are new, so it’s not as big of an update as the VQ35HR vs VQ35DE. It’s an interesting fact given the larger displacement, which inherently requires quite a few new parts.

We’ll discuss more specifics in the next sections following engine specs. We just want to clear a few things up here. There is no such engine as the VQ37HR, and the VQ37VHR is actually the only engine in the VHR family. The V in the name refers to Nissan VVEL technology, and this is their first production engine to use this tech.

As with the VQ35HR the HR still refers to high-revving. In other words, the major difference is the addition of the VVEL system on the VQ37VHR.

Specs for the Nissan VQ35HR vs VQ37VHR engines are as follows:

As you’ll notice many of the specs are fairly similar. The VQ37 does have a larger displacement, and the valve timing systems are different. Of course, the larger VQ37VHR offers more power. The torque increase is minimal, but the Nissan VHR engines has a much better power curve. There’s more low-end and mid-range torque available. Let’s move onto more VQ35HR vs VQ37VHR specs below.

All of the engines we’re discussing in this article share the same aluminum engine block. That’s despite the fact the VQ37 is a larger engine. Nissan simply increased the displacement by increasing piston stroke to 86mm. Bore remains the same at 95.5mm.

Most of the internal engine differences for the VQ35HR vs VQ37VHR are due to the longer stroke and higher compression. The VQ35 required shorter connecting rods, and new piston designs. In the grand scheme, these changes don’t matter too much.

Some state the VQ37VHR internals are slightly stronger while others believe they’re about equal. It’s a consideration for those wanting to go with boost or other high power mods. That’s all a conversation for a different day, though.

Above we quickly mentioned the VQ37VHR torque curve is much better even though it’s only a few more peak torque. The VVEL system is a large reason for this. The older VQ35HR uses dual VVT, which is still great technology.

However, the VHR’s VVEL system is more advanced and allows for a lot more valve and timing control. It’s similar to BMW’s Valvetronic systems. Overall, these systems provide a great power-band with excellent efficiency and emissions. It’s a nice upgrade for the VQ37VHR engine.

Of course, the above doesn’t cover all of the updates and changes. The intake manifold design was another big improvement for the VQ37HR. It uses shorter runners for better top-end power output. Short runners usually aren’t ideal if you want good torque in the lower revs. However, Nissan likely went this route due to the VVEL’s ability to off-set those losses and then some. VHR engines also use dual intakes.

There are a lot of other small details we could go into, but this covers most of the important updates. Keep in mind – the VQ35HR vs VQ37VHR are actually more closely related than the VQ35DE. That’s even true despite the changes to displacement, valve control, etc.

When it comes to 350/370Z and G35/37 reliability there isn’t too much to discuss. That’s a good thing. However, all cars and engines are prone to their share of issues. No internal combustion engine is perfect, and that applies to the VQ35 vs VQ37. There isn’t a perfect answer as to which is better, though.

We wrote an article about Nissan VQ37VHR problems here along with a VQ35DE engine problems guide. Both engines are pretty stout and well built for their stock power output. Major engine problems or reliability issues aren’t much of a concern on either engine.

Is the Nissan VQ35HR vs VQ37VHR more reliable? We honestly don’t have a perfect answer and a lot of it is a case by case basis. A lot of it simply comes down to luck of the draw and maintenance. If you maintain these engines well they should deliver very similar reliability.

There are a few other things you’ll likely consider before buying a VQ35HR vs VQ37VHR engine. Of course, price and model are two major factors. The VQ35HR in the 350Z and G35 is a bit older, so they’re typically cheaper cars to get into. Price differences aren’t huge if you’re looking at a 2008 350Z VQ35HR vs VQ37VHR in a 2009 370Z, for example.

Price gaps can grow significantly if you’re comparing something like a 2018 370Z to a 2007 350Z. Most likely aren’t looking on the extreme ends. However, if you want to avoid a car older than 10 years old then the VQ37VHR is the best option. You can even find some under warranty as the Z was made up until 2020.

To tie this back into the reliability topic – a newer engine is generally going to offer better reliability. At least in the short to medium-term. As such, the VQ37VHR is likely the more reliable engine. Again, the difference isn’t big if you’re looking at similar years and mileage.

Both Nissan engines are solid all-around engine. They offer a good blend of performance, reliability, and fuel economy. It’s also fair to say they’re both considerable upgrades over the older VQ35DE engine. Outside of that engine – is the VQ35HR vs VQ37VHR better?

We believe the VHR is the superior engine. It’s newer, has a slightly larger displacement, and uses Nissan’s VVEL variable valve timing. That’s not to say the VQ35HR is a bad engine by any means, though. For many owners, one engine likely isn’t that much better than the other but the 3.7L VHR does have the slight edge.

What’s your experience with the VQ35HR vs VQ37VHR? Are you considering one?