Nissan originally based the design of their VK V8 engines on their VQ V6 engine series. The VKs, previously known as the ZH series, are aluminum 4-valve DOHC engines. The adaptation of a variable intake manifold helped the VK engines optimize low-end torque and high-end horsepower to boost overall power and performance.

The VK45DE was the first VK engine introduced by Nissan in 2002. With an impressive power output of up to 340 horsepower and 333 lb-ft of torque, the VK45DE has found itself in various Infiniti and Nissan applications. Furthermore, Nissan adapted a flat-plane crankshaft version of the engine boosting its power for usage in its high-performance motorsport models. Nissan produced the VK45DE for models available to the public from 2002 to 2011 until ceasing production and solely applying the VK45DE to the LMP2 racing models. The aluminum block and head design allow for a lightweight engine with exceptional power and performance in versatile applications.

Throughout this guide, we will examine and discuss the design and overall value of the VK45DE engine. First, let’s take a look at the basic engine specs of the VK45 before jumping into its reliability, common problems, and some of its most popular modifications. 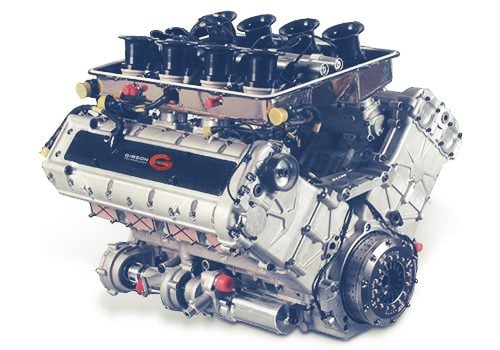 The basic engine specs for the Nissan VK45DE engine are as follows:

These specs may be considered relatively average to above average in terms of capabilities for a modern V8 engine. Regardless of the fact that most V8 engines are expected to have an impressive amount of power, the power output in the VK45DE engine is still recognized as exceptional. Considering the size and versatility of the VK45, the engine has excellent value. Nissan utilized the design in basic applications as well as their high performance and racing models. Impressive power and high performance are balanced priorities throughout many of the Nissan VK45DE applications. Now, let’s look at a complete list of models that utilize the Nissan VK45DE engine below.

The VK45DE engine can be found within the following applications produced from 2002 through 2016:

The power and performance of this engine are still appreciated through 2022. Yet, no engine is entirely perfect. So, with that said, let’s jump into some of the most common problems or design flaws associated with the VK45DE engine.

Fortunately, the Nissan VK45DE engine is well respected for its durability and reliability. Yet, certain engine components are known to be fragile or cause issues, especially at higher mileages and wear over time. Most VK45 drivers should see their engines reach 200,000 miles without severe damage or costly repairs. However, like any engine, longevity is based upon proper maintenance, usage of high-quality oil, and timely repairs. So, first, let’s focus on some of the design flaws and potential issues that surround the front catalytic converters for the VK45DE engine system.

The specific issues surrounding the front catalytic converters for models using the VK45DE engine are much more prominent in countries with less access to high-quality gasoline. Bad fuel can expedite the deterioration of catalytic converters. Thus, poor fuel quality leads to converter breakdown and ceramic dust entering the cylinders. Unfortunately, this issue can lead to further engine deterioration to the point of needing a complete engine replacement. Since these problems are more likely due to the usage of low-quality fuel, this problem may be less of a design flaw and more of a poor maintenance issue.

Problems with front catalytic converters can directly result in the following symptoms:

Some Nissan VK45DE drivers may report various engine fires upon starting their engine. Initially, the engine may start and idle appropriately for a minute or so until misfiring. This issue can lead to improper engine performance and potentially create hazardous conditions for some drivers if the problem is severe. Most consistent misfires happen upon a cold engine start as the engine is warming up. However, VK45 drivers also report issues with misfires in second and third gear.

Certain drivers report these misfiring issues as a product of the many coolant sensors that can be prone to failure. Yet, there are various potential causes for an engine misfire. Causes can include: faulty mass airflow sensors, engine coils, knock sensors, fuel injectors, or other defective components. Additionally, symptoms of Nissan VK45DE engine misfires can include:

Many different Nissan VK engines report the need for a replaced timing chain from the 40,000 to 100,000-mile mark, making this issue more common than many other engines of its size. Therefore we must consistently recommend a keen eye, proper lubrication, and continuous maintenance of the VK45DE timing chain to deter costly and time-consuming repairs. Timing chain or chain tensioner problems may result in the following symptoms:

In conjunction with our listed engine misfiring issue, the Nissan VK45DE has many sensors that can potentially fail. Mass airflow and knock sensors are among the most prominent sensors to fail within the VK45 system. The VK45DE is known to have plentiful sensors to the point of redundancy, making them more prone to failure than the average vehicle. With that said, various symptoms of a faulty MAF or Knock sensor may include:

A faulty mass airflow sensor or knock sensors can affect various driving performance aspects. Knock sensors are responsible for identifying improper rattling or movement within the engine. Therefore, a faulty knock sensor can hide a rattling engine and the different defects that occur when driving on a rattling engine. Additionally, defective or failing mass airflow sensors can also cover up further issues causing engine damage. Also, failed MAF sensors can cause similar issues to low compression or low vacuum. Therefore, fixing or replacing both of these sensors is crucial before they progress into various more severe problems resulting in engine damage.

Due to the varying models the Nissan VK45DE has been applied to, reliability ratings may range for different engine applications. However, the VK45DE engine has a reputation for being a good overall engine in terms of reliability and durability in its various usages. Many of our listed problems are a product of poor maintenance or usage of low-quality fuel or oil. Therefore, it’s hard to dissect the VK45 engine for any blatant or glaring flaws. Yet, no engine is perfect or bullet-proof, and some of our common problems aren’t very likely to occur before reaching the 100,000-mile mark to label the VK45DE’s overall reliability as great.

In summation, the VK45DE has various weaknesses yet should be considered above average for its balance of power and reliability. Many applications of the VK45 are found in performance-oriented Infiniti models that still anchor their selling point as durable daily drivers. Yet, it is hard to ignore potentially expensive repairs associated with such things as fragile timing chains or various faulty sensors. Also, it is important to note that certain modification projects don’t utilize the proper balance of supportive mods or a good tune. In conjunction with aggressive daily driving, these voids can drastically reduce the lifespan of an engine. Regardless, the VK45DE is still considered to be an average to above-average engine in terms of reliability.

The versatility and dynamic performance capabilities cannot be denied of the Nissan VK45DE engine. These V8 engines have substantial potential, leading to Nissan adapting them for usage in their high-performance applications. For example, the various LMP2 racing models had 450 horsepower and 430 lb-ft of torque. Furthermore, the Super GT 350Z and Super GT GT-R both had an impressive power output of 490 horsepower and 380 lb-ft of torque. The range of power in the different applications of the Nissan VK45DE engine showcases its versatility and dynamic performance potential.

However, due to the wide range of power output, many drivers seek to boost the power of their VK45DE engine with additional modifications and tuning. The Nissan VK45DE engine is an excellent option for a customization project considering its design. Let’s now jump into some of the most common and favored modifications for the VK45DE in the following section below.

The modding community is known to appreciate the VK45DE for its great adaptive potential for proper mods and tuning. Various different progressively costly mods can be applied to the Nissan VK45DE engine. Popular modifications and upgrades of the VK45 include:

Drivers should absolutely consider a good tune with any additional modifications or upgrades. Tuning and proper supportive mods are essential for any customization project to reach full potential and not compromise engine longevity. The VK45DE engines are known for substantially boosting power with the proper mods. Yet, with overzealous projects that don’t utilize appropriate supportive mods and ECU mapping and tuning, the VK45DE can dramatically decrease its lifespan without much improvement in power. However, in contrast, this engine can remarkably boost its overall strength and performance with the appropriate collective modifications.

Overall, the Nissan VK45DE engine is a dynamic and versatile V8 engine that kicks off the entire VK series. Nissan made an impact with these V8 DOHC 4-valve engines seen in its different applications. From daily drivers throughout the Infiniti line to high-performance Nissan racing models, the VK45DE’s reach is wide enough to be used in impressively powerful engines, yet models that are also easily accessible to the everyday driver.

These V8s have impressive power and few blatant design flaws. Therefore, it’s hard to be highly critical of the Nissan VK45DE. The successor of the VK45DE, the VK45DD utilized the same design yet only applied a direct injection fuel system. Usage of high-quality oil and good gasoline, when available, can significantly extend the lifespan of these engines. However, certain components such as timing chains and various sensors are prone to failure before the 100,000-mile mark. Fortunately, the VK45DE does not have many other associated problems.

The VK series of engines has had a great influence on the progression of Nissan as a whole and various other automotive brands. The success of these engines has allowed Nissan and Infiniti to continue to grow their brands and wide array of models throughout time. It is hard to deny the impact the first VK engine has had. Therefore the Nissan VK45DE demands respect for its value.

Let us know in the comments below your opinions or experiences with the Nissan VK45DE engine or the VK engine series as a whole!