Throughout the 1990s, Nissan prided itself on its VH engine series’s power and performance value. Specifically, the Nissan VH45DE engine held great value for the automotive brand. As a result, the overall power and performance of the engine were appreciated and utilized by Nissan from 1989 to 2001. The VH engines come in two different configurations, with a power range from 266 to 310 hp. These naturally aspirated engines use a DOHC 4-valve VTC system. Preceding the VH engine series were Nissan’s Y engines, and succeeding the VH engines are Nissan’s popular VK engines. Throughout this guide, we will specifically focus on the overall strengths and weaknesses of the VH45DE engine.

Both Infiniti and Nissan have used the VH45DE engine. However, the VH45DE was only applied to two models. Regardless, this engine is specifically versatile and found in many different applications outside of everyday cars, such as drifting, drag racing, dirt track sprint racing, and boat racing. Therefore, the value of the Nissan VH45DE expands beyond just its two commercial applications. With that said, let’s jump into some of the basic engine specs for the VH45DE engine and its general strengths. 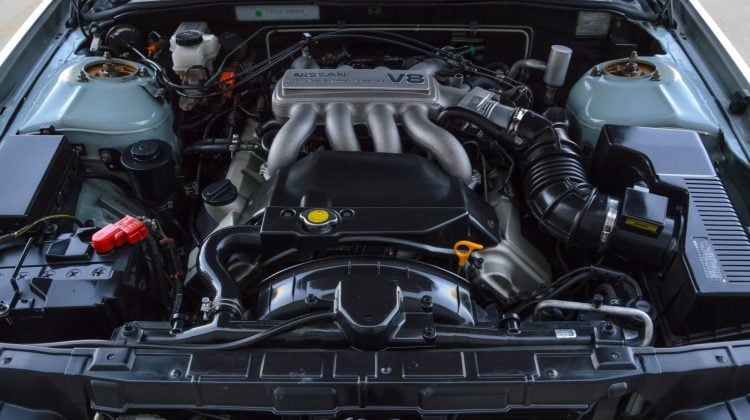 The basic specs for the Nissan VH45DE engine are as follows:

The VH45DE can be found in the Infiniti Q45 model produced from 1990 to 1996, with 278 horsepower and 294 lb-ft of torque. Additionally, the VH45DE was applied to the Nissan President model from 1990 to 2002, with the same output of 278 horsepower and 294 lb-ft of torque. As stated earlier, aside from its few commercial applications, the Nissan VH45De is adaptable and versatile enough for many outside uses other than just everyday drivers.

Both displacements of the Nissan VH45DE have impressive power and torque, along with their exceptionally light build for a V8. The VH45De was manufactured to please consumers who wanted a more powerful engine regardless of fuel efficiency for various vehicles. After the introduction of Nissan’s V8 in 1989, Toyota responded with their own V8, the 1UZ-FE. Both engines were notably popular within the Japanese automotive market yet expanded to a few applications in the U.S as well. Now let’s look at the performance value and most commonly utilized modifications for the Nissan VH45DE engine.

The lightweight construction of the VH45DE in conjunction with its power output makes up for a high-quality driving experience. The application of a steel forged crankshaft also helps the engine prioritize power and performance first. Therefore, many drivers report the VH45DE as a smooth driving experience for a performance V8 engine regardless of its lack of fuel efficiency and larger-bodied applications. However, like most engines, maintaining high-performance value relies on the practice of timely maintenance, usage of high-quality oil, and keenly identifying any needed repairs.

The VH45DE’s overall power can be greatly boosted with modifications and a good tune. However, as with any engine, installing certain mods without tuning or proper understanding of engine balance can result in a shortened engine lifespan with lackluster power output. Yet, these are still engines known to have exceptional adaptability and great options for a customization project. Due to its great potential, many drivers will seek to boost their VH45DE. With that said, some of the most common modifications for the Nissan VH45DE engine include:

The modifications above can vary significantly in cost and difficulty of installation. An upgraded timing chain is commonly recommended to transcend any issues with the initially fault-prone plastic timing chains. Additionally, performance upgrades such as new camshafts and intakes can help promote airflow throughout the engine system. Along with performance upgrades, tuning or ECU mapping can greatly increase the overall performance and power of the VH45DE. Again, this is a reminder that proper customization projects always utilize a good tune when boosting power substantially. Furthermore, more pricey and time-consuming modifications such as cylinder headwork can also improve airflow and intake. Better airflow means more power.

At the height of the Nissan VH45DE, it was considered to be one of the more reliable engines utilizing dual overhead camshafts. This feature stood out due to the lack of engines available to the public with this configuration. Additionally, the usage of aluminum throughout the construction of the engine block and head put less weight on the engine supporting components. A heavier engine tends to have more components that can be prone to failure. Yet, lightweight engines with low-quality material can also have many fault points. Therefore it is essential to practice good upkeep to maintain the VH45DE and extend its overall lifespan.

Overall, the Nissan VH45DE is an exceptionally reliable engine, often reaching the 200,000-mile mark without the need for severe or costly repairs. Although no engine is perfect or bulletproof, the VH45DE is extremely respected for its durability and longevity. At the time, some drivers may have considered this engine to be the most reliable V8 on the automotive market. Therefore the popularity grew in its Japanese applications until eventually transitioning to the American market. Regardless of some of our common problems listed below, the VH45DE has still upheld its reputation of exceptional durability. Therefore we rate this V8’s overall reliability as above average to good. Nissan still aims to make engines as reliable as this older V8s.

It’s important to note that most of our problems listed below are a product of time and wear or poor maintenance and upkeep. With that said, there are still a few problems associated with the VH45DE that are commonly reported by drivers enough to make our list. But, again, no engine is entirely perfect or flawless. So let’s now take a look at some of the most common problems for the VH45DE.

If problems surrounding your timing chain are not fixed promptly, it may fail leading you to be stranded and needing a tow, let alone a costly repair!

Many of the older Nissan engine systems have issues surrounding the MAF sensors and various knock sensors. Due to the almost excessive number of engine sensors, certain older Nissan engines are more likely to have problems with MAF or knock sensors. Since knock sensors are responsible for acknowledging improper engine movement or rattle when these sensors fail, they can hide severely detrimental engine issues. MAF sensors measure the airflow into the engine’s control module. This sensor will adjust airflow accordingly for maximum power output. These MAF sensors can further lead to issues similar to those caused by low compression. Therefore, it is essential to quickly identify and fix any problems surrounding MAF or knock sensors before developing further engine problems. Symptoms of problematic MAF or knock sensors will include the following:

Overall, the Nissan VH45DE is considered to be remarkably reliable aside from our list of commonly associated problems above. Furthermore, many of these issues are often deterred by practicing good maintenance, upkeep, and the usage of high-quality oil and fuel. With that said, let’s now take a look at the overall reputation of the VH54DE in our following summary section.

The Nissan VH45DE was one of the most dynamic and reliable V8 engines of its era. The dual overhead camshafts design and reputable power helped build the reputation of the VH45DE throughout its time. Although the VH45DE was not seen in various applications, it is still respected for its overall value. As stated previously, these engines adapt well to different applications and modifications. There are many different utilizations of the Nissan VH45DE, including boat racing applications, as well as drag and dirt track racing vehicles. Therefore, it’s clear that the VH45DE offered power, reliability, and versatility to many different drivers throughout its production period and far beyond.

These engines are expected to reach the 180,000 to the 200,000-mile mark when well maintained, without needing costly or severe repairs. However, it is important to note that one design flaw is the initially used plastic timing chains. These timing chains are considered to be fragile, and it is often recommended to upgrade to a metal timing chain. Nevertheless, aside from our commonly listed problems, the VH45DE is a strong engine with a great reputation in terms of reliability and durability.

The Nissan VH45DE engine sparked competition amongst other automotive brands at the time due to its success. During that era, Toyota introduced a similar V8 engine, eventually being utilized in various Toyota and Lexus models, some of which were ultimately available to the American market. However, the Nissan VH45DE is still respected in many modding communities and customization projects far past its production end.

What is your opinion or experience associated with the Nissan VH45DE? Let us know in the comments below if this engine met your performance and reliability standards.