In the Nissan community, the KA24DE inline-4 engine is a cult classic. The KA24DE was the final iteration in Nissan’s KA engine family and is known for its reliability, ease of maintenance, and power potential.

In factory form, the KA24DE is somewhat of an underwhelming engine. As the KA24’s heritage began with its implementation in lightweight Nissan pickups in KA24E form, the KA24 wasn’t originally intended for use in a performance car. The result was a 2.4L inline-4 that produced a modest 155hp and 160ft-lbs of torque. However, most KA24DEs didn’t remain in stock form for long.

The KA24DE gained notoriety for its use in the Nissan 240SX. As the ‘Drift’ class of motorsport became widely recognized and celebrated, the 240SX was a commonly sought-after starter car for drift builds. The KA24DE gained a huge aftermarket community due to the 240SXs mainstream success. While Nissan certainly has more capable engines, the KA24DE has the necessary genetics to produce ample performance with supporting modifications. 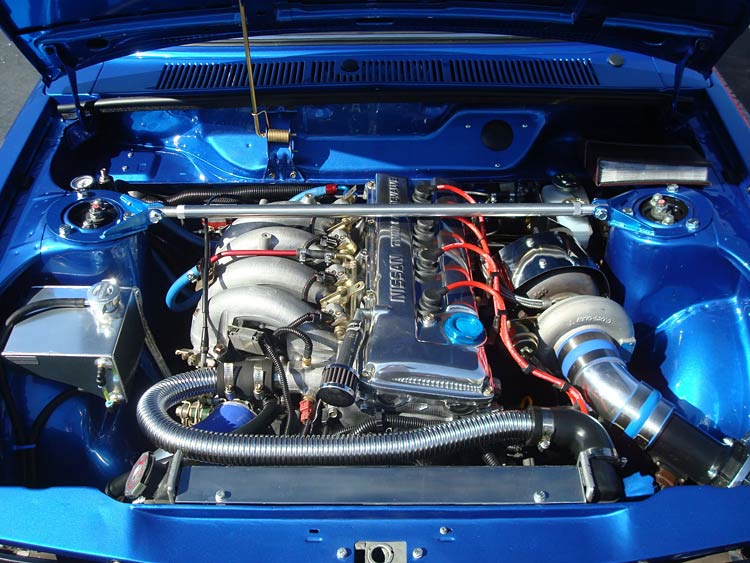 What Cars Use the KA24DE?

Over the course of the KA24’s 13-year production run, it powered 24 Nissan models with varying applications. As a replacement for the Nissan Z engine, another jack-of-all-trades motor, the KA24 was used in everything from first-gen Pathfinders, to the Altima. The KA24DE was only used in a couple of US-spec cars, with most KA24DE models being exclusive to Japan.

Of the vehicles on this list, the only US-spec Nissans to feature the KA24DE were the Xterra, Frontier, and 240SX. The first-gen Xterra and Frontier featured a slightly less powerful KA24DE engine producing 143hp, while the KA24DE in the 240SX produced 155hp.

Specs for the Nissan KA24DE are as follows:

As you can see, the numbers aren’t anything to write home about. The KA24DE had a relatively low horsepower per cubic inch ratio, especially when compared with other competing N/A 4-cylinder engines like the Mazda B-Series that achieved similar numbers from a smaller displacement.

While the Japanese-constructed KA24DE is the overall better-performing variant, the Mexican-made KA24DE also has its benefits. Due to the thicker wall construction of Mexican KA24DEs, they are able to handle more power with aftermarket performance modifications. This is especially the case for forced induction. With KA24DE turbo kits being an extremely common aftermarket upgrade, many enthusiasts prefer the Mexican KA24DE.

Since the overall construction of the KA24DE varies depending on where it was manufactured, some parts aren’t interchangeable between the two. For instance, Japanese-spec camshafts, pistons, oil feeds, and oil pickups cannot be used on Mexican-spec KA24DEs and vice versa. The easiest way to tell a Japanese KA from a Mexican KA24DE is the location of the dipstick. The dipstick on Mexican-made versions is located near the rear, while Japanese KAs have their dipstick located in the middle of the engine.

In stock form, the KA24DE is known to be a tank of an engine. As the KA24DE’s block is cast iron with a strong, aluminum cylinder head, it can withstand a fair amount of abuse before issues start to surface. The KA24DE has a comparably low compression ratio as well, meaning that there isn’t a high load of internal pressure which benefits longevity.

Unsurprisingly, there is very little information available on KA24DE reliability issues or common problems due to its overall robustness. There are very few issues that commonly plague KA24DEs, and most of them aren’t serious. Keep in mind, this is the case for stock KA24DEs, when heavy performance modification enters the picture, additional problems can arise. Some of the most common KA24DE issues are as follows:

Overall, it is pretty easy to identify if the valve cover on your Nissan KA24DE is faulty or needs a replacement. Here are some of the most common telltale signs and symptoms:

The most common method to identify a leaking valve cover gasket is through visible oil streaks on the valve cover or engine block. This is usually accompanied by a burning oil smell caused by the leaking oil coming into contact with the block and vaporizing. If oil is present around your KA24DE’s valve cover, a faulty gasket is the most likely cause.

Fortunately, a KA24DE valve cover replacement is a straightforward and inexpensive fix. The valve cover gasket can still be purchased from Nissan for under $20. The replacement job also requires the spark plug seals to be replaced to prevent oil from leaking into the spark tubes. Spark plug seals can also be purchased from Nissan for a cost of around $30. If you have basic tools laying around, the replacement can be performed by anyone by following a quick tutorial. Most KA24DE owners say that the job takes about an hour, even for inexperienced owners.

Another frequently cited issue for KA24DE engines is a failed distributor. Age is the most common reason that KA24DE distributors fail. The distributor’s main job is to supply the KA24DE’s spark plugs with ample voltage current in the correct firing order and in the correct duration of time. If a KA24DE’s distributor fails, it can have adverse consequences on engine performance.

A malfunctioning distributor can result in the following symptoms:

The KA24DE’s distributor is located on the driver’s side of the engine, easily identifiable by the spark plug wires coming off of it. The distributor is in the same place regardless of the engine’s place of origin. The replacement is as easy as unbolting a few 12mm retainer bolts, sliding the old unit out, replacing it with the new unit, and reinstalling the bolts. Overall, a 25-30 minute job.

Replacing your KA24DE’s distributor is a quick and easy way of ruling out spark/misfire issues. If the engine is still misfiring after a distributor replacement, it is most likely the spark plugs or spark plug wires that are causing the issue.

KA24DE’s often suffer from extremely pronounced timing chain rattle. This can be a serious annoyance and potentially lead to issues down the line if neglected. The main cause of this annoyance is the engine’s overall construction. Due to the fact that the KA24DE is a 4-cylinder with a flat-plane crank, it has an imperfect secondary balance. Most other 4-cylinders with similar construction resolve this problem with balance shafts to smooth out the engine’s performance. The KA24DE does not utilize these shafts.

Due to the “rattley” nature of the KA24DE, issues can arise from the timing guides internally rubbing against the valve cover. During the early stages of this occurring, it is mostly an auditory annoyance, as the rubbing causes a sound that is often described as similar to marbles in a tin can. However, if left unchecked, the timing chain can get caught on a coarse part of the valve cover and jump the timing, or sever the timing chain altogether.

Since the KA24DE is an interference motor, a timing chain issue can cause serious damage to the engine’s internal components. If you notice an odd sound coming from the valve cover area, it should be assessed and addressed sooner rather than later.

Due to the fact that this issue is simply caused by the timing chain rubbing against the valve cover, there aren’t very many symptoms to note. Other than auditory cues, there aren’t any other performance-based symptoms of note. As a matter of fact, most KA24DE owners that experience this issue let the issue persist as the rattle does not affect performance directly.

Ultimately, there are a few noted solutions to fix the KA24DE’s timing chain rattle issue. In quite a few cases, the noise is caused by a broken or misaligned top or side timing guide that has wedged itself into a problematic position.

This can be diagnosed by removing the valve cover and inspecting the timing guides for any signs of damage. Since the KA24DE’s release, Nissan has deemed the timing guides on the engines unnecessary. To fix the issue, you can simply remove the top timing guide at no sacrifice to the engine’s performance.

If the noise still persists following the removal of the timing guides, there is likely an issue with another component of the timing chain system. The next steps would be to replace the upper chain, tensioner, and guide. More than likely, that will solve the issue.

What Oil Does the KA24DE Use?

The frequency of maintenance is the most important factor in KA24DE reliability. The KA24DE is notorious for being picky about the oil that it uses. So, what oil should you use in a KA24DE? Despite Nissan’s manual, the best oil to use in a KA24DE is a 0W-40 fully-synthetic oil, preferably Mobil 1. 0W-40 is a much more stable oil than the recommended 5W-30 compound and is better for engine preservation.

The Nissan KA24DE is notoriously reliable over every other aspect of the engine. While it might not have the performance of the more advanced and modernized SR20DE, the KA24DE will get you where you need to go without any fuss.

Other than general maintenance and time-related repairs, the KA42DE is a strong engine that has few common issues. While valve cover gaskets and distributors tend to fail after decades of use, those are commonly replaced items on virtually any engine of the KA24DE’s age. Those issues have less to do with the quality of the engine itself and more to do with those individual components’ estimated lifespan.

While the dreaded KA24DE timing chain rattle can potentially produce serious issues if left unchecked, it is a simple problem to fix most of the time. As the solution is simply to remove an unnecessary part that can be reached from under the valve cover, a fix to this problem is easy to perform and free provided that you have tools on hand.

The key to the KA24DEs reliability rests in its simplicity. The KA24DE featured no high-tech or groundbreaking technology during the time of its production. Nissan simply built what they knew would work. As a result, the KA24DE is a bulletproof engine that is easy to work on and cheap to repair. While it is an underwhelming engine as far as performance is concerned, choice aftermarket additions can turn it into a beast.