The Nissan VQ37VHR engine that sits inside the 370z is a fantastic and more than capable motor. It is a naturally aspirated, DOHC aluminum block engine, with a compression rating of 11:1. It produces between 325-350 hp and 276 tq from the factory – depending on market and trim. Like its predecessor, the 350z, the 370z is ripe for engine upgrades and mods that increase both horsepower and torque. Headers are one of the most popular upgrades for the VQ37VHR, as they increase power and change the exhaust note. In this guide, we will look at the best header upgrades for the 370z, along with benefits, costs, and more.

Headers are the part of a car’s exhaust system that connect directly to the engine. In their factory form they are known as exhaust manifolds, and the term headers typically indicates an aftermarket piece of equipment. They are generally reserved for enthusiasts looking to increase the power output of their VQ37VHR engine.

Headers collect the hot gasses being pushed out of the engine and direct them through the rest of the exhaust system. Due to their location – being the first contact for exhaust gasses – design and construction are incredibly important. For stock power levels and applications, the OEM exhaust manifolds are capable of adequate performance. However, for anyone looking to increase their performance or get the most out of their other bolt-ons, aftermarket headers become very useful.

Not only is it necessary to look at factors like weight and material, but it is also key to study the design of 370z headers. You want good flow with as little turbulence as possible. Turbulence is created by poorly thought out designs that introduce large inopportune bends and joints, which impedes flow. This diminishes the effectiveness and leads at times to reversion. Reversion happens when hot exhaust gasses are pushed back into the combustion chamber, robbing the engine of clean and cool air. A good header should open the exhaust flow, while reducing overall weight and exhaust gas temperatures.

In a nutshell, that’s the basic idea behind headers and header upgrades. They might not be the most talked about or sexiest part of an engine build, but they are important when looking to unlock as much power as possible. Next, we will look at the two types of 370z headers, long-tube and short-tube, before exploring their benefits and looking at the top recommendations.

One of the biggest advantages of header upgrades is reduced back-pressure and increased scavenging effectiveness. OEM headers are only as effective for stock power levels and are made at as cheap a price as possible. Aftermarket headers are purposefully designed to reduce back-pressure and increase scavenging at higher than factory power levels. Reducing back-pressure lowers EGTs and increases scavenging, which has many benefits. Keeping EGTs down prolongs engine life and keeps performance high. Increased scavenging and reduced reversion means the dirty exhaust gasses are removed and clean air can enter the combustion chamber. Which leads to bigger and more sustained power.

Another feature of 370z header upgrades is the change in exhaust volume and tone. Aftermarket headers will increase the volume of one’s exhaust substantially, and will also create a raspier and more aggressive tone. Long-tube headers exacerbate both effects more than short-tube headers. The difference is obvious under wide open throttle and on cold starts, but even at idle the change is noticeable.

Now, let’s get back to the most important part about header upgrades – the power increases for the VQ37VHR. As mentioned before, headers will typically give gains of 10-20 whp and 5-15 wtq without a tune. With a tune, gains generally increase another 5-10 whp and 5-10 wtq. ECU calibration is highly recommended for any header upgrades, as it significantly changes exhaust flow characteristics. Without tuning, upgraded headers can cause lean air-to-fuel ratios under WOT — which leads to knock and pre-ignition.

Headers are a great upgrade for getting a little extra power and volume without adding forced induction. They are great when coupled with aforementioned mods like intakes and cat backs, and enthusiasts can really tailor their exhaust note to their choice by exploring all of the different combinations.

The issue of catless vs high-flow catalytic converters is a bit complicated when looking at the different 370z header upgrades. As mentioned before, the long-tube headers completely remove all catalytic converters from the exhaust system. The only exception to this is the Motordyne headers, which will be talked about later. Removing catalytic converters makes vehicles non-emissions compliant, so make sure to consult all applicable laws when making your decision.

Now that we have a good understanding of what headers are, why they are important for the 370z, it is time to look at some recommendations. This list is not aimed to be exhaustive or comprehensive, as there are so many potential choices out there.

Rather, this list is meant to be a look at the top practical 370z headers available on the market today. The list has both long-tube and short-tube headers, keeping in mind a variety of budgets, setups, and power goals. Let’s look at the top-five header upgrades for the 370z’s VQ37VHR, in no particular order.

The first entry on the list are the Fast Intentions Long-Tube Headers for the 370z. There are two different versions, one for the 2009-2011 models and one for the 2012-2021 models. They are available with two different finishes, either non-polished stainless steel or 1600* black ceramic – though it is a $450 increase to go with the ceramic. The manufacturer notes they specifically engineered the header to be firing order specific, so that proper scavenging is achieved and turbulence is reduced.

According to their website, when coupled with a high-flow cat back exhaust they saw average gains of 8 whp, and a maximum of 15 whp and 18 wtq. The product is hand-built and made to order, and is the loudest option Fast Intentions has. They can be a bit on the pricey side with the ceramic coating, but they are still a good deal and solid option for a 370z long-tube header upgrade. Reviews on the FI headers are fantastic and praise the sound and performance gains.

Motordyne is the second entry on the list, and they are by far the most expensive option on the VQ37VHR. Motordyne is a relatively new company to the 370z world, but their products have a solid reputation already. The Motordyne long-tube headers are unique among 370z headers. It is the only long-tube header option available that can be had with high-flow catalytic converters. Users can choose between a straight-pipe, helmholtz resonator, or a high-flow cat option. They can be changed without having to remove the entire header. Which is incredibly useful for those who need cars that are street-legal but also capable of being track-ready.

According to their website, Motordyne’s long-tube headers are capable of gains of 25 whp and 10 wtq with ECU tuning. They are a bit hard to find, as they are only made in batches and are often out of stock, but when available they are a solid option. Price can be a discouraging factor, but the interchangeability is incredible. Reviews surrounding Motordyne’s headers are positive, with users pointing out the exhaust tone, performance, and fitment were all excellent.

Next on the list is the PPE Engineering long-tube, equal-length race headers. PPE Engineering is one of the best known Nissan performance brands, and their headers have been given outstanding reviews by those who have used them. They are highly recommended by owners for their aggressive tone and performance gains, but they can be a bit hard to find. They are all made to order and have to be purchased from a dealer rather than the manufacturer themselves.

Per the manufacturer’s website, they achieved gains of up to 23 whp with their long-tube race header on the VQ37VHR. With a tune, they claim their headers are capable of an astonishing 35 whp. Like the FI headers, these come with ceramic coating. They are an excellent choice for a header upgrade, and a middle ground between the FI and the Motordyne. 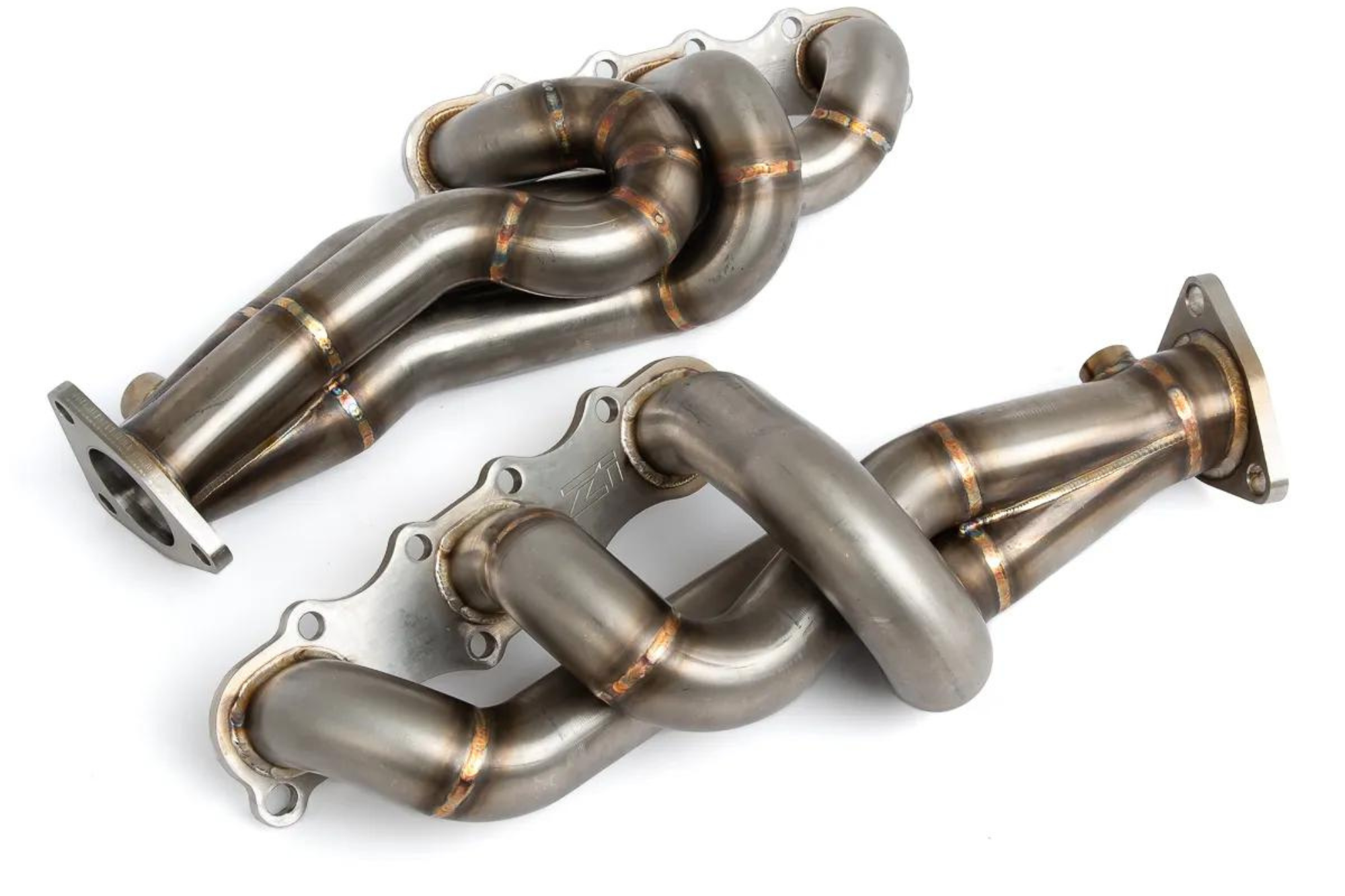 The next entry on our list is our first pair of short tube headers, the Z1 Motorsports Performance Headers. These were originally designed to be used with the 350z, but they can also be used with the 370z with Stock DE Catalytic Converters, High Flow Cats, or Test Pipes (per the manufacturer). 370z buyers will also need new gaskets to connect the manifold to the cats, too. Reviews for the Z1s are very solid, with buyers highlighting the good craftsmanship, excellent fit, and solid performance gains.

Being short-tube headers, the Z1s will not give you the performance of the first three headers on the list, but they will still be helpful and aid in power. The merge collector is solid, and the equal length runners aid in scavenging. Overall, they are good options for those looking to retain the stock cats.

The final entry on our list is the DC Sports polished header. The DC header is by far the cheapest option on the market, though it does still offer some good gains. It has equal-length runners and can be had with ceramic coating, and is a direct bolt-on fitment for OEM.

The DC header is a good option for those looking to upgrade their 370z on a budget. It will not give you the performance gains of long-tube headers, but its larger diameter will help exhaust flow and free up some extra ponies.

Headers are an important upgrade for 370z owners looking to get the most performance available out of their vehicle. Not only will they add power throughout the rpm range, but the reduced back-pressure will aid scavenging, reduce reversion, and lower EGTs – all important variables. Your exhaust tone will also become raspier and more aggressive, matching the distinctive characteristics of the VQ37VHR engine.

Depending on the type, brand, and whether or not tuning is used, header upgrades can be expected to net 10-35 whp and 5-20 wtq. Tuning gives users the most bang for their buck, and should definitely be used in conjunction with any header upgrade for the 370z. Long-tubes will as much as double the horsepower as short-tubes, but they also run afoul of emissions regulations – with the exception of the Motordyne’s high-flow cat option.

Each of these headers are great potential upgrades for the 370z. The FI headers are the most affordable long-tubes and they offer solid gains. The Metrodynes are by far the most expensive, but they are also the most unique and the ability to change between catless and high-flow cats is amazing. PPE Engineering’s headers are the standard for many among long-tubes, but they are not always easy to find and definitely more expensive than the FIs. Both short-tube headers are good upgrades for those looking to stay emissions compliant, with budget setups prioritizing the DC headers because of their discount in price.

What’s your experience with 370z headers? Are you considering any?