Headers are one of the best power mods for naturally aspirated 1.6L and 1.8L Miata’s. Outside of going the forced induction route, you will be chasing horsepower gains in the single digits with rather expensive mods, like headers. Therefore, if you plan on adding a turbo or supercharger to your NA or NB Miata then I’d recommend staying away from the $400+ on headers and saving for forced induction.

While there are a number of less expensive NA and NB mods that we discuss in our ultimate Miata mods guide, headers are a necessity if you are looking to maximize your naturally aspirated power. With that being said, headers offer some decent power gains for NA/NB Miata’s, but also offer a number of other performance benefits. This article is going to discuss the performance benefits of upgrading the Miata headers, the cost, power gains, and some of the best headers on the market. This guide applies to both 1.6L and 1.8L NA and NB Miata’s – just note that fitment does vary by engine and year. 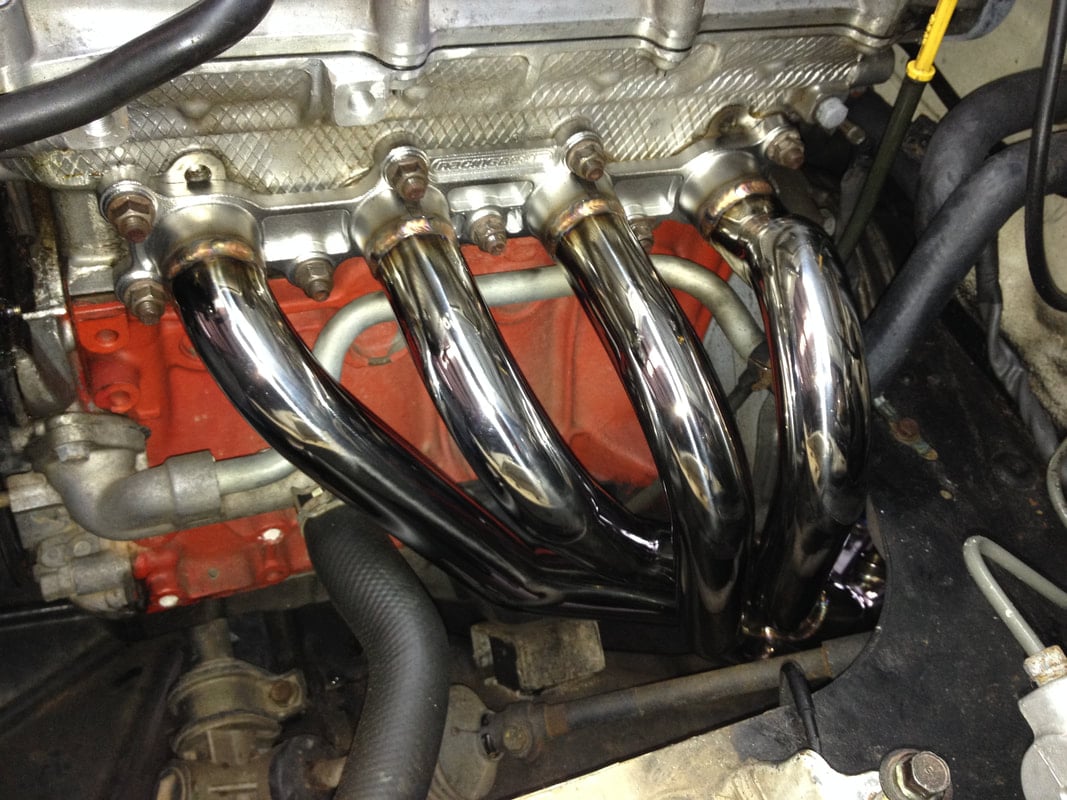 What are Miata Headers?

When exhaust gases exit the engine via the exhaust ports, they enter first into the headers. The headers then deliver the exhaust gas to the catalytic converter and then out the tailpipe via the cat-back portion of the exhaust. Headers are simply a basic part of the exhaust system. However, due to their proximity to the cylinders they have a big impact on power and performance.

You will frequently see headers called either shorty or long-tube headers. This refers to the length of the header piping. Some long-tube headers will also delete the catalytic converters. However, on the NA and NB Miata, headers are all equal-length. This means that each piping for each exhaust port is the same length. Aftermarket headers are also the same length as the OEM headers, but equal-length generally refers to the exhaust port piping. So there is no need to discern between long-tube or shorty headers for the Miata.

For NA and NB Miata’s the general consensus is that 4-1 headers provide the best power gains and performance benefits for racing purposes.

Headers are most effective when combined with a full cat-back exhaust system. The stock NA and NB exhaust is about 1 7/8″ in diameter which is rather small and restrictive. Replacing this with a 2″+ system should provide about 3-5hp across the power band. Headers will mostly impact peak hp, which tends to be around the 6000rpm range. Headers and a cat-back exhaust will retain the catalytic converters. If you want to remove the cats with a race pipe then you can expect about 2hp more.

One of the biggest benefits of headers is the reduced backpressure. This results in lower exhaust gas temps and helps exhaust gas scavenging. Lower EGTs and less backpressure helps with both performance and overall engine health.

Sound gains from headers alone are usually pretty minimal. You will notice a deeper tone but usually not too much louder of a tone. If you are worried about sound, headers won’t add too much of it. If you want the most sound, you’ll want to also add a cat-back system.

As discussed, power gains are predominantly around the 6000rpm mark. Therefore you won’t notice a huge gain in low-end power or torque. The biggest exhaust gains for the 1.6L and 1.8L Miata is from a cat-back exhaust which provides gains throughout the power band. However, that isn’t to say that headers aren’t worth it.

Combining headers with a cat-back exhaust will add somewhere in the ballpark of 5-8hp, with the lower number being gains throughout the power band, and the higher number being peak gains. The catalytic converter can be removed for about 2hp extra.

The downside to headers and cat-back upgrades is the cost. Headers will run you $400-$500 and a cat-back will cost somewhere around $400-$700. So you’re easily looking at $800+ for just 5-8hp. Turbo kits are expensive so I understand the desire for maximizing naturally-aspirated power, but once all mods are said and done you will probably be wondering why you didn’t go turbo. And this is why most people agree that the best Miata mods are suspension and handling mods.

Since Miata headers are all equal-length, there isn’t a ton of differentiation from header to header. The most important thing is the metal and the finish. Ceramic coated headers will last the longest and prevent any rust. You can find some sub-$200 headers on the market but they will be made from cheap metal and will rust quickly.

Keep in mind fitment for NA/NB headers differs by year. Here is what fitment generally looks like:

All your header options can be bought via Goodwin Racing.

RoadsterSport is probably the best balance of price and quality on the market. Most of their headers come in at $399 which is the most affordable option, outside of getting cheap ebay headers.

Their headers are 4-to-1 and made of 304-stainless steel. The exhaust port portion of the tubing is 1.5″ each which expands to 2″ where they merge. Additionally, it comes with two bungs for an auxiliary wideband sensor. It also has a flexible section in the piping that helps mitigate vibration throughout the cat-back portion of the exhaust.

Overall, these are our favorite headers on the market since they are the best priced option without sacrificing quality.

Racing Beat is probably the top dog of Miata headers. While their headers are a bit more expensive they utilize a larger 1.7″ tubing that combines into 2.375″, which are both larger than the RoadsterSport option. The one caveat is that these do not work with superchargers, so avoid these headers if you plan to add a SC.

The one downside to Racing Beat is that their headers are about $550, and they also tend to always be out of stock on them. They make the headers in very small batches so they usually don’t have a ton laying around and can take awhile to receive. With that being said, they are the largest headers available which is great for backpressure reduction and power gains.

Cobalt Ceramic Coated headers are produced by Jackson Racing who has been around a long time. Their headers are also 304 stainless steel and are ceramic coated for long-term durability.

These headers are unique in that they are 4-2-1 headers. The primary tubing is 1 5/8″, the secondary tubing is 1 7/8″ and the single pipe section is 2 3/8″. This style spreads power gains out throughout the power band, but provides smaller gains. You’ll see less peak hp gains compared to 4-1 headers, but will see more than 4-1 headers in the low-end of the range. With that being said, these come #3 on our list since consensus from Miata experts is that 4-1 headers are better.

Headers replace the factory exhaust manifold. The factory manifold has various kinks and bends in it that restrict exhaust flow and create backpressure. Upgrading to higher-flowing headers has a number of performance benefits, including some small power gains.

Ultimately, headers aren’t the best bang-for-the-buck in terms of $/hp. However, if you are looking to maximize NA/NB horsepower without adding forced induction, then headers should be on your mod list along with a cat-back exhaust and possibly a catless midpipe. Headers will provide a peak 3-5hp gain, typically at the peak of the powerband around 6000rpm. They don’t provide a ton of power throughout the band, or provide much in the way of low-end torque.

Headers are best combined with a cat-back exhaust since the stock catback on the 1.6L and 1.8L Miata’s are also very small and restrictive. Replacing the whole exhaust system should result in 5-8hp gains, with the potential to tack on a few more with a catless or high-flow midpipe.