Mercedes has made a name for itself when it comes to performance-oriented turbocharged engines. Some may consider Mercedes-Benz solely a luxury brand. Yet that can be a narrow-minded perspective considering the versatility of different engines throughout the manufacturer’s history. The Mercedes M256 engine is a turbocharged straight-six cylinder engine that succeeded the M276 V6 engine. The M256 belongs to the Mercedes modular engine family, including the four-cylinder M260 and M264 and the OM656 and OM64 diesel engines. The 3.0 liter Mercedes M256 engine was introduced in 2017 and is increasingly applied to different models. Yet, most of these models are going to be on the expensive side of the spectrum for Mercedes’ applications. With luxury and performance as main priorities, drivers can expect a high price tag even for Mercedes-Benz standards.

The M256 is an aluminum alloy block engine with dual overhead camshafts and a twin-scroll turbocharger. These four-stroke inline-six turbocharged engines have an impressive power output with 362-429 hp and 369-384 lb. ft. of torque. Also, it’s important to note that direct-injected engines are known to demand diligent maintenance and the usage of high-quality oil in order to reach higher mileage. Unfortunately, the M256s are still new enough that it is difficult to find statistics regarding common problems. However, throughout this article, we will discover and examine some of the most likely issues to occur in the M256 and discuss the overall reliability, different applications, pricing, and engine specs.

With that said, let’s now take a look at the Mercedes M256 basic engine specs in the section below. 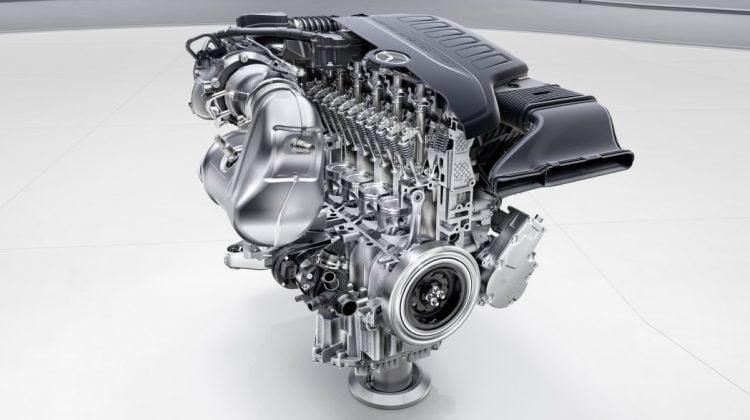 Basic engine specs for the Mercedes M256 are listed below:

Luxury and power are high priorities of the Mercedes M256 engine, with a ranging horsepower of 362-492 depending on which application. Modern engines commonly utilize aluminum blocks and heads to lower weight and increase power and performance. In fact, cylinder heads in the M256 are made of a modern aluminum-silicon alloy allowing for even more of a weight reduction. A newly designed integrated starter-alternator provides another boost in power; while also minimizing size and lowering engine weight by replacing belt drives that control the air conditioning and water pump. Lastly, the Mercedes M256 uses a twin-scroll turbocharger with an insulated exhaust manifold and an electric auxiliary compressor that helps reduce turbo lag. The light-hybrid integrated system helps balance the M256 engine’s capabilities while boosting power considerably, an interesting adaptation that we examine more thoroughly further below.

It’s been a considerable amount of time since Mercedes last produced an inline-six engine. For more information on Mercedes’ last inline-six, check out our previous guide on the Mercedes M104 engine here. Mercedes hopes that the new M256 engine will uphold the standards of the brand’s performance and increase overall reliability while still producing a versatile engine that can be applied to varying models. So now, let’s jump into a list of all the different models that the Mercedes M256 engine has been applied to thus far.

First introduced in the 2017 S-Class W222 S450 and S500 models, Mercedes is gradually increasing the different applications for the M256 engine in recent years. Unfortunately for American consumers, many of the models listed below are only available in the European or Asian automotive markets. Following below is a complete list of each model that utilizes the Mercedes M256 engine.

Many of these models are going to cost a pretty penny. For example, the base S-500 sedan starts at $111,000. All of the models listed above are produced from 2017 throughout this year’s 2022 adaptations. In summary, let’s dissect the engine design more and review the overall driving experience of the models that use the Mercedes M256 engine in the following section.

The Mercedes M256 engine is a sibling of the other Benz modular engines (M260, M264, OM656 Diesel, OM64 Diesel). The engine utilizes our mentioned aluminum blockhead with dual overhead camshafts that each have four valves per cylinder. Interestingly, the M256 uses a 48V “light-hybrid” system. The integrated ISG 48V light hybrid system helps boost the engine’s overall power. 430 horsepower out of an inline-six engine is mighty impressive, and the M256 can thank the light hybrid integration for that output.

Yet, is the M256’s power applied appropriately? Is the driving experience up to par for true enthusiasts? Unfortunately, the short answer is: not quite. Many of the M256 engines are applied to models that still feel clunky or boat-like regardless of the modern power and performance data that Mercedes advertises. Of course, some drivers will state that these engines are a vast improvement from Mercedes’s previous high-power applications. Yet, it’s still commonly reported that these associated models still prioritize luxury over a high-quality driving experience. However, it’s hard to criticize an inline-six engine with such impressive horsepower. Unfortunately, it is easy to criticize some of the pricey large-bodied models within which the M256 has been applied.

Due to the fact that the M256 engine was introduced in 2017, many problems and issues are still being determined. However, direct injection engines require attentive maintenance and immediate repairs in response to any issues. Usage of high-quality oil is also essential for the M256 engine to reach higher mileage and sustain its everyday reliability. Modern high-performance Mercedes engines are known for being demanding in terms of upkeep and repairs. Drivers may see higher repair costs compared to similarly-sized engine types on the current automotive market due to the price of replacement parts and varying labor costs. Mercedes is actively working on making a better name for itself in the reliability and durability category. Long known for being pricey to maintain and coming with nagging repairs (especially at higher mileage), let’s hope the newer Mercedes M256 engine helps the brand by being a sustainable engine with longevity.

One of the initial problems drivers are reporting for the Mercedes M256 is overheating. Unfortunately, the only solution offered by Mercedes is to drive back to the dealership and upgrade the 48v light hybrid system through the CPU. Fortunately, this seems to correctly solve many of the overheating problems and engine lights that M256 drivers are experiencing. Furthermore, many drivers report sporadic issues with smaller electronic and lighting components.

As soon as further data is recorded in terms of reliability and problems for the Mercedes M256 engine, we plan on publishing an associated guide. In the meantime, for some further extensive information on the Mercedes M256 engine’s predecessor, check our article on the most common problems for the Mercedes M276 engine. Mercedes aimed to correct many of the deficits or flaws previously represented in the M276 engine, yet no model is perfect and Mercedes’ isn’t necessarily synonymous with long-term everyday reliability.

Mercedes-Benz enthusiast’s ears perked up once Mercedes announced the introduction of a new inline-six engine. The M256 engine, and its predecessor, the M104, are progressively replacing the M276 V6 engine throughout Mercedes’ applications. This direct-injected engine has yet to display any glaring design flaws. However, we anticipate hearing of more common problems throughout time and higher mileage. Mercedes continues to grow respect in terms of durability in the hopes of ridding some of its history of nagging reliability issues and costly repair problems. However, it is still evident that the Mercedes M256 engine requires diligent upkeep and repairs in order to sustain its longevity and power output.

Unfortunately, many of the M256 engine’s applications will be in some of the more expensive models that Mercedes has to offer. Many of which will not even be available in the American market. Yet, considering that Mercedes has placed the M256 engine in these higher-priced models, it is clear that the manufacturer has a lot of confidence in the M256’s future. Although, Mercedes-Benz seems to have difficulty balancing performance and luxury with affordability, or maybe they just do not care. It’s easy to pander to a consumer demographic that is buying a car for its aesthetics and reputation over performance and value. That doesn’t mean the M256 is overhyped in its power and performance, but it can mean that the price points do not match the overall value.

Finally, let us know in the comments below your first impressions of the Mercedes M256 engine. Does the M256 make the substantial improvements Mercedes drivers are seeking? Do the new inline-six, and its associated models have enough value for its price tag?