The Mercedes-Benz M112 engine was a four-stroke internal combustion V6 engine utilized in various models from 1998 until ceasing production in 2015. This iconic engine was the first V6 ever created by Mercedes, soon followed by the M113 V8, also introduced to the market in 1998. Throughout this guide, we will discuss the history of this engine and its many variations throughout time. We will also evaluate the M112’s reliability and durability and offer insight into any potential upgrades and mods that can boost power and performance.

The M112 V6 engine is regarded as one of the most durable engines that Mercedes has ever produced. Its predecessor, the M113, is often a favorite amongst daily drivers for the same reasons. However, there are certain common recurring problems that drivers may come across. Luckily, many of the most common issues for the M112 do not require severe repairs or engine breakdowns. Interesting, considering that many consider Mercedes-Benz as a manufacturer to be average in terms of reliability compared to other companies. However, this engine is a favorite amongst many older year Mercedes drivers. Let’s take a more detailed look at the Mercedes M112 V6 overall, starting off by discussing the engine’s reliability in more detail below. 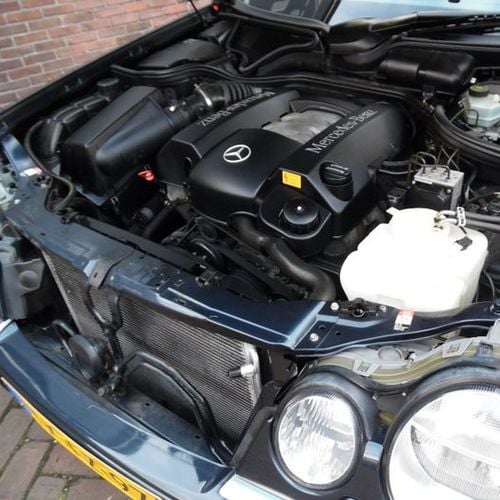 Does the Mercedes M112 have a decent reputation amongst only Mercedes drivers? Or does this engine stand up against others similar in size produced within the same era? Like most cars, that can depend on multiple different variables.

The M112 V6 does have the tendency to have frequent oil consumption issues. Yet, these issues can be deterred by proper maintenance and repairs. This high oil consumption problem is often the product of worn valve stem seals; however, other various engine faults can also be the catalyst. High oil consumption is simply a symptom of oil leaks. It’s also important to check the oil heat exchanger, which has a seal that often fails and creates those pestering oil leaks.

Another common issue to note, which is also prevalent in the M113 V8 variation, is problems with the harmonic balancer. A harmonic balancer can also be commonly referred to as a crankshaft pulley. This problem results in a rough idle. Depending on year and model, this repair can run you from $300-$700 based on national Mercedes dealerships’ average repair costs.

Proper maintenance and repairs should considerably extend the Mercedes M112 V6 engine’s lifespan. Changing your oil filter with a fleece filter, using high-quality oil, and being diligent with repairs can transform the M112 from unpredictable to reliable. This engine is average to above average in terms of longevity and durability compared to other luxury car engines of that time. However, the M112 V6 engines require the proper respect and maintenance to achieve that above-average rating.

The M112 does not have glaring issues in terms of design and functionality. However, like any engine, the faults we discussed make it essential to practice proper maintenance and upkeep. Consistent maintenance and repairs translate to better reliability and overall engine longevity. In summation, below are the 3 most prevalent problems for the Mercedes M112 V6 engine:

Oil leaks will become prevalent in most cars that age and wear over time, the M112 V6 is no different. Gasket seals and various rubber seals within the engine can crack and fail with more mileage. There are numerous different catalysts for nagging oil leaks within the M112 V6. Easily accessible repairs such as a leaking oil pan, or more complex repairs such as failed seals around the oil heat exchanger can all be culprits causing oil consumption issues. Also, Always check the wear on your M112 V6 valve stems as they are a prevalent problem area causing oil leaks. Again, using high-quality oil and practicing consistent proper maintenance can deter many of these oil leaks and consumption problems.

Problems surrounding the harmonic balancer are more prevalent for the M112 V6 than many other engines manufactured by Mercedes. Also referred to as the crankshaft pulley, failures within the harmonic balancer will result in a much rougher driving experience for your M112. Along with a rough idle and slower acceleration, issues with the harmonic balancer could potentially cover up more severe problems causing damage to your M112 engine. Considering that this is potentially our more costly repair listed for the Mercedes M112 V6, it’s essential to fix this issue before it progresses into something more detrimental and serious for your engine.

It is important to note that the Mercedes M112 V6 (and M113 V8) can have reoccurring intercooler problems resulting in engine overheating issues. If the intercooler pump does fail, it can lead to the system performing inefficiently causing intake temperatures to rise. Higher intake temperatures then result in poor engine performance and a more fragile engine with a shorter lifespan.

Many of the problems we highlighted for the Mercedes M112 V6 do have affordable replacement parts, especially if sourced from third-party manufacturers or outlets. Yet Mercedes labor costs do tend to make these repairs more costly. Labor, especially at certified Mercedes dealerships can be much higher than the national averages for most other manufacturers.

The Mercedes-Benz M112 V6 was produced in six different variations throughout its lifespan. Each variant listed below still has the basic foundation of the M112 V6 engine, yet each increases in displacement and power gradually. These engines utilize a silicon and aluminum engine blockhead. Below we will showcase each of the M112 V6 variant’s basic power specs and which models the engines were used in.

The E28 is a 2.8L that produces 204 base horsepower and 199 lb-ft of torque. The following models listed below use the E28 engine:

The E32ML is a 3.2L special variant of the E32 engine. This version differs by containing a twin-screw type supercharger that boosts the engine’s power to 349 base horsepower and 332 lb-ft of torque, making it the most powerful variation. The following models listed below use the E32ML engine:

There are plenty of modifications on the market for the vast models utilizing the Mercedes M112 engine. Turbo upgrades, camshaft upgrades, and a good tune are the most popular amongst M112 V6 drivers seeking to boost their engines’ power and performance. This section will examine and discuss some of the most popular modifications and upgrades for the Mercedes M112. The upgrades listed below will prioritize power gains, affordability, and benefits, including increasing engine lifespan and durability.

Mapping (also referred to as remapping or “chipping”) is often recommended for the Mercedes M112 V6 due to its affordability and power gains. Remapping is the process of adjusting the electronic control units microchip to be more performance-oriented and thus overwriting factory settings on the ECU. Car mapping, therefore, allows your engine to meet its full potential in terms of power without being restrained by stock settings. In summation, this process will provide an immediate boost to the Mercedes M112 V6 engine’s acceleration and speed.

Upgrading the M112 V6 with a supercharger or additional turbo can offer significant power gains boosting both horsepower and torque. However, these turbo upgrades can be expensive as well as challenging to install properly. Without proper installation and driving techniques, many turbocharger upgrade projects for the M112 V6 can fail, causing extreme engine damage and a massive bill of repair (or even the need for a new engine altogether.) Increasing the Mercedes M112 V6 engine’s performance with turbo upgrades is sure to create the most significant gains in terms of power. Yet, these upgrades will be the most costly and complex option that makes our list for the M112.

Any engine with aftermarket upgrades and modifications will benefit greatly from a good tune. The Mercedes M112 V6 engine is no different, as this engine’s power increases significantly from a good tune. Each additional modification or upgrade to your engine will require a good tune in order for these additional mods to perform effectively. ECU mapping listed above can be considered a tune as it alters the car’s settings to maximize engine performance. Dyno tuning differs as it focuses on balancing the engine’s performance more broadly and does not explicitly focus on the ECU. As you increase horsepower and torque with modifications for the M112, it is crucial to balance out those supportive mods with good tuning.

Upgraded intakes are among the most commonly recommended mods for any car, let alone the M112 V6. An unrestricted intake can allow more airflow that generates more power without costing an arm and a leg. Plenty of options are available on the market for the vast amount of different models that utilize the Mercedes M112 V6 engine. This upgrade should be one of the most cost-effective options that make our list for the M112.

Performance camshaft upgrades conclude our list of most common mods for the Mercedes M112 V6. Better air intake and improved exhaust emissions are two benefits that an upgraded camshaft offers. In addition, performance cams increase horsepower and acceleration noticeably for the M112 V6 by improving the engine’s timing. Performance camshafts improve the opening and closing timing of the valves and control the flow of fuel and air into the engine. With better timing and control of airflow and fuel, the engine can perform much more efficiently, resulting in better fuel economy.

The Mercedes M112 V6 is an iconic engine for the manufacturer, with close to 20 years in production until ceasing in 2015. The M112 is the first V6 engine to be introduced to the automotive market by Mercedes. The reliability and longevity of the M112 V6 are greatly dependent on proper maintenance and repairs. In addition, it’s essential to use high-quality oil on this engine to extend its lifespan. However, this engine does have average to above-average reliability for everyday drivers compared to other similar engines in the luxury car market. The M112 V6 precluded the M113 V8 from Mercedes. Check out our previous article on the Mercedes M113 V8 engine’s problems for more information on extending your M112’s engine lifespan.

Oil consumption issues commonly occur within the M112 V6 engine. First, check your valve stem seals for any potential leaks, as they are often the catalyst for pesky oil leaks and excessive oil consumption. Therefore, it is always important to practice proper maintenance and high-quality oil to deter these issues. Another common issue reported was problems with the harmonic balancer. The harmonic balancer, or crankshaft pulley, can cause the engine to shake excessively when in need of repair. Without proper repair, a broken harmonic balancer can result in worn rod bearings and broken crankshafts.

The Mercedes M112 V6 engine can respond well to modifications. A good tune and ECU mapping can result in better overall engine power and performance. Tuning is crucial for the M112 V6 engine to function at total capacity, especially as you increase an engine’s horsepower and torque with upgrades.

There is no doubt that the M112 V6 had a dynamic impact on Mercedes-Benz history, let alone the entire automotive market. So leave a comment below, letting us know about your experiences with the M112 V6!