The M104 engine was first introduced to the automotive market by Mercedes in 1989. Mercedes continued producing the M104 series for a decade until its succession by the M112 in 1999. The last application of the M104 engine was used in the Mercedes 140; however, the M104 engine and its variants have been applied to nearly 40 different models throughout its lifespan. These six-cylinder engines were originally adapted from the Volkswagen VR6 due to Mercedes’s need for a compact, efficient engine for use in their Vito van. However, that did not stop Mercedes from continuing to update the M104 and expand its usage for many more different applications.

The M104 engines have five different displacement sizes, including the special AMG options. The Mercedes M104 can be found in the initially introduced 2.8 L ranging upwards to the 3.4L and 3.6L AMG versions. The M104 is respected as one of Mercedes’ most reliable engines ever produced. Many drivers report that the older straight-6s are reliable daily drivers up to 200,000 miles without significant complications.

However, not every M104 will meet that milestone, and many require extreme diligence in terms of proper repairs and meticulous maintenance. In addition, parts may be difficult to source for many of the different models that use the M104. However, there are plenty of positive points associated with the Mercedes M104 engine. Yet, not every engine is perfect. Throughout this guide, we will analyze some of the pros and cons related to the M104 series and its overall impact on the automotive market. 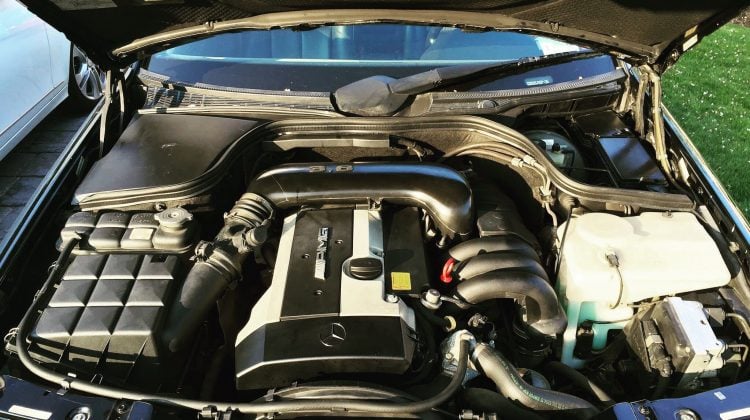 Specs for the Mercedes M104 engine are as follows:

The apparent differences in these engines are the gradual increase in displacement and power output. Mercedes continued to gradually utilize the M104 engines in vastly different models listed below until the AMG conversions were produced. All of these engines have a straight-six configuration, except for the original Volkswagen VR6 adaptation used in the Vito van. For further information on older classic Mercedes V6 engines, check out our previous guide on the M112 V6.

Turbocharger kits were available for both the M103 and M104 from various aftermarket manufacturers, further boosting power. Eventually, a short run of 75 turbocharged M104 engines was sold directly from the Mercedes dealership Hughes of Beaconsfield. Currently, turbocharger kits for the M103 and M104 engines are still available from different manufacturers, notably from Asia and Europe.

All of the engines consist of a cast-iron block with an aluminum head. Many Mercedes drivers appreciate the durable construction of these M104s. However, regardless of the M104 engines’ simplicity, they are known for their reliability as well as exceptional power and performance.

What Cars Use the Mercedes M104?

The Mercedes M104 engine can be found in the following models below:

The M104 engines were utilized in a total of 36 total models by five different automobile manufacturers, including Mercedes-Benz, Roewe, Heuliz, Status & Class, and SsangYong.

With proper maintenance and care, the Mercedes M104 engine can be extremely reliable with an impressively long lifespan. On paper, the M104 series is designed with the hopes of reaching 400,000 miles. Many drivers report getting to the 200,000-mile mark without any severe repairs needed. Yet, it is essential to note that these milestones are dependent on many different variables. Proper upkeep and high-quality oil usage are vital for most engines, including the M104.

Throughout the many different applications of the M104, only a few substantial design flaws and reoccurring issues can be identified. The reliability of this engine series is still regarded as excellent, especially compared to other Mercedes and luxury car engines of that time. Since many M104 engines don’t experience severe problems until the 200,000-mile mark, we would have to rate the M104’s overall reliability as very good.

The Mercedes M104 is a well-rounded and highly dependable engine. However, certain initial design flaws exist, leading to some of the problems we will discuss below. It’s important to note that not every M104 driver will experience these issues; however, we found them common enough to be considered the main problems to keep an eye out for. Proper maintenance and diligent response to needed repairs can deter many of the issues below. Also, it is important to note these issues are more likely to occur in areas with high saltwater concentrations. Saltwater specifically can cause much faster erosion. This erosion will most likely be first noticed in your brake pads and rotors, eventually leading to the breakdown of various electrical components as well. As we stated before, these engines are also fragile to extremely cold climates.

Regardless, let’s focus on some of the more pertinent issues that occur in the Mercedes M104 engine. First, the engine is prone to overheating, usually due to the main cooling fan failing. Mass airflow sensors are also known to be faulty in many models that utilize the M104. Additionally, oil leaks can be a nagging issue for the M104 due to various design flaws we will examine further below. Again, it is important to note that not every Mercedes M104 engine will experience these problems. These are simply the most common reported issues we found for the M104 series. Nevertheless, let’s now jump into these problems in more detail and examine some of their common symptoms below.

Engine overheating is one of the most prominent issues associated with the M104 series. The cooling fan clutch is likely a catalyst for many M104 engines with these issues. Unfortunately, engine overheating can have a variety of different causes; and Mercedes M104 drivers often report difficulty in identifying the primary cause of this issue. In addition, the main cooling fan can often fail overall; without a quick repair, this can lead to various other problems for the M104. Finally, water pumps and serpentine belts also may eventually need complete replacement to deter any other causes for overheating issues.

Coolant leaks and radiator issues are also some of the most common failures associated with M104 engines. Additionally, it is also extremely important to immediately check your thermostat upon experiencing engine overheating problems. Symptoms of engine overheating issues can include:

Problems surrounding the mass airflow sensor are commonly reported by many Mercedes M104 drivers, especially in those that have reached higher mileage. Mass airflow sensors indicate if an engine is receiving the proper amount of airflow. Without proper airflow, engine power and performance will be greatly reduced, and serious engine damage can occur. Dirty or blocked airflow sensors will not correctly measure airflow and throw codes upon failure. Driving on a faulty mass airflow sensor does not directly result in severe engine damage. Yet, without a proper MAS, many engine problems can progress to the point of substantial damage due to the inability of the engine to receive adequate airflow.

Various symptoms of mass airflow sensor failure can include:

Many engines have consistent nagging issues with oil leaks. Unfortunately, the Mercedes M104 engine is also a member of that club. Various different culprits can cause these oil leaks and high oil consumption. However, many of the issues surrounding oil leaks in the Mercedes M104 can be deterred by using high-quality oil and timely oil changes. Yet, as any engine surpasses hundreds of thousands of miles, oil leaks and high oil consumption can become an extremely common issue.

Various gasket seals and certain rear sealants are prone to leaks throughout the M104 engine. Additionally, worn valve stems can also be a common cause of nagging leaks and higher oil consumption. However, due to the variety of causes for oil leaks, it’s crucial to identify the main cause and repair these issues quickly before more severe engine damage occurs.

Furthermore, symptoms of Mercedes M104 oil leaks can include:

The M104 engine series had a great lifespan due to its exceptional reliability and balance of power and performance capabilities. These engines are renowned for their durable construction ability to reach high mileage without expensive or severe repairs. However, not every engine is perfect in design. The M104’s do have a sensitivity to extremely cold climates. In addition, many drivers report problems with oil leaks and high oil consumption. Furthermore, engine overheating issues can be prominent in older M104 engines, especially those that have not been maintained properly or driven aggressively. Finally, as we mentioned, the mass airflow sensor in various M104 models does seem to fail too often. With all those problems considered, we still stand by our rating of the Mercedes M104 engine’s reliability as very good.

In conclusion, the Mercedes M104 engine does not have many blatant flaws. Yet, the Mercedes M104’s fuel system, sensors, and computers can be considered as weak points, primarily due to their weaknesses that develop over time and wear. But, again, no engine is absolutely perfect or made of stone. Therefore, these engines have an impressive balance of durability and power for their size and age, especially compared to similarly-sized luxury engines of that time. Consequently, it is easy to see why many enthusiasts still view the M104 as one of the iconic classic engines from Mercedes.

Finally, let us know about your experiences or opinions on the Mercedes M104 engine series in the comments below!