General Motors LS engines are among the most popular engines in the world. Ask the question, “What mods should I do to my car?” If you ask a few people, someone is likely going to reply, “LS swap it”. As such, it’s no surprise the LS engines are a common comparison. In this article, we discuss LS1 vs LS3 specs, reliability, mods, performance, and swaps. 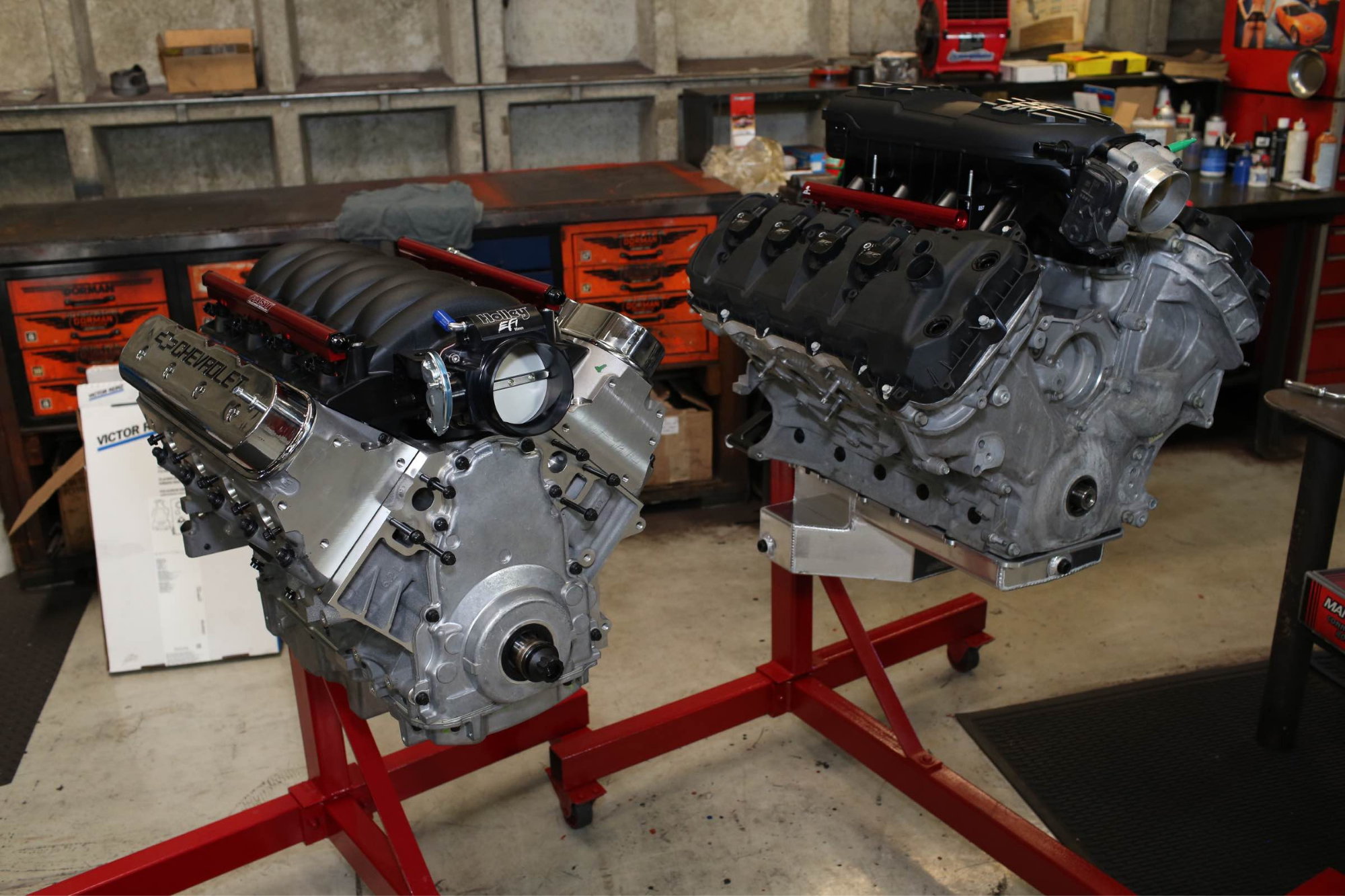 General Motors 6.2L LS3 is in the following years and models:

*2010-2013 Corvette Grand Sport models use a modded version of the LS3 engine. Primary differences were dry sump oiling and a forged steel crankshaft.

Specs for the GM LS1 and LS3 engines are as follows:

The list of LS1 vs LS3 specs could continue on much longer. However, the engines actually share much in common. They’re both NA engines with aluminum heads and blocks. Connecting rod length, deck height, thrust bearing location, etc. is also the same. It makes sense given they’re on the same LS engine platform.

Anyway, the major difference lies within the displacement. The LS1 is 5.7L while the LS3 comes in at 6.2L. A larger displacement is accomplished with a larger bore, but both engines share the same 3.622″ stroke. Due to the larger bore, GM was able to fit a better flowing head on the LS3.

GM LS3 engines also receive a higher compression ratio. All these factors enable the LS3 to make up to 436 horsepower and 428 lb-ft. The LS1 is no slouch but it lags behind with peak numbers of 350hp and 365tq.

We’ll discuss more specs throughout the article as they pertain to the LS1 vs LS3 discussion. For in-depth specs, check out these LS1 and LS3 specs pages.

The primary difference between the LS1 and LS3 is simply displacement. However, there were a number of underlying changes to support the larger LS3 engine. That’s aside from any other small tweaks due to the 11-year newer design of the LS3 engine.

That said, let’s look at a few of the other differences between the LS1 vs LS3 engine. These are important factors that may sway you towards the larger, newer LS3 engine. One trend that will continue is that the LS3 is simply the better performance engine.

First off, some LS cylinders heads can be swapped around to other engines. That is not the case for the LS1 vs LS3 heads, however. The reason is that the larger 6.2L engine uses a 4″+ bore. A larger bore allows for larger intake and exhaust valves which ultimately improves flow.

LS1 engines use a cathedral intake port shape while the LS3 uses a rectangular shape. In testing, the LS3 head flows about 293 cfm through the intake and 244 cfm from the exhaust. A pretty notable improvement over the 244 intake cfm and 206 exhaust cfm of the Chevy LS1 head.

It’s important to note that Chevrolet has always built great cylinder heads that flow well. The LS1 is still a good head, but it doesn’t quite compare to the improved design of the LS3. When it comes to modding for more power the LS3 has a clear advantage with cylinder head flow.

The intake manifold was another big upgrade on the Chevy LS3 engine. Overall, the design of the LS1 and LS3 intake is very similar (much like the engines overall) but there are some key differences that favor the LS3. It’s also not a direct fit for the LS3 since the port shaping is different on the LS3.

GM increased the LS3 intake manifold flow with a straighter design. This helps smooth out airflow which leads to better flow and performance. Again, this isn’t a direct fitment and would require an LS3 cylinder head which is a nightmare of a conversion and likely not worth the time or money.

Upgrades are similar across essentially any LS engine. Of course, fitment can vary significantly but the general list of mods is roughly the same. That concept applies to the LS1 vs LS3 conversation, too. Some of the best LS upgrades include:

We are talking about LS engines here, so this list is far from exhaustive. Pretty much any upgrade you can imagine is out there for both the GM LS1 and LS3 engines. How far you want to go is up to you.

However, the LS3 does offer the better starting point. With larger displacement, better flowing heads and manifold, and other minor updates it’s the better performance engine. We know – it’s getting a bit repetitive. The LS1 will have some benefits of its own coming soon enough, though.

The LS1 and LS3 are both very stout, reliable engines. However, some LS fans love to cover up the fact that they’re still prone to their share of problems. That can be said about any car and engine, though. Ultimately, these LS engines deliver above average reliability.

Both engines share some similar issues. Check out our article about LS1 engine problems here. The water pump failures and pushrods are also known issues on the LS3 engine. Occasional lifter, roller, and other head/cam related problems pop up. Bent pushrods are usually due to over-revving.

Anyway, the LS3 is likely the more reliable engine in the short-term simply since it’s the newer engine. Age can be just as hard on an engine as mileage. It tends to take a toll on gaskets, seals, o-rings, etc. Otherwise, it often just comes down to the luck of the draw.

Maintenance is the true key to reliability on the LS1 vs LS3. Use quality oils, change fluids on time, and fix issues in a timely manner if they occur. Do all of this and both LS engines can easily make it to 200,000+ miles with few issues along the way.

Finally, there’s something that goes in favor of the LS1 over the LS3. The 5.7L LS1 engine is older and also fairly easy to find. Most complete LS1 engines with about 50-120k miles will run $3-5k. You can find them even cheaper at certain auctions and junkyards.

On the other hand, the LS3 will likely set you back about $5-8k. Again, there are ways to source the LS3 cheaper with some searching. You’ll still likely be shelling out at least $1,000-2,000+ more than you would on an LS1. Chevy does also offer the 6.2L LS3 as a crate engine if you want something brand new and very expensive.

If you’re able to afford the extra cost of the LS3 then it’s definitely the better choice between the LS1 vs LS3. However, if you’re on a tight budget then the LS1 is still a great engine. With the savings you’ll maybe have a bit left for some LS1 mods to bring it closer to the 6.2L engines performance. However, comparing them mod for mod the LS3 will always remain the better engine.

The Chevrolet LS1 and LS3 engines share much in common. After all, they’re both within the LS engine family so they utilize many same or similar designs. The major difference lies within the 5.7L and 6.2L displacement of the LS1 vs LS3, respectively. A larger engine is achieved by widening the bore of the engine, which also allows for a better cylinder head.

LS3 engines are about 11 years newer, so there are also some other minor updates that favor the 6.2L V8. Add it all together and the LS3 has many benefits over the older, smaller LS1. That’s not to say the LS1 motor is bad by any means but as they say – there’s no replacement for displacement.

Both GM engines deliver stellar reliability and don’t experience many engine problems. However, no engine is perfect and that applies to the LS1 vs LS3 as well. Reliability favors the LS3 (at least in the shorter-term) since it’s a newer engine. Even low mileage LS1’s may have some issues related to age. Fortunately, it’s usually easy fixes while the engine is out and waiting to be swapped.

Ultimately, the LS3 is the better all-around engine and the higher price tag reflects that fact. If you’re on a tighter budget the savings on and LS1 may go a long way. It’s still a good engine that’s easy to maintain and modify.

What’s your experience with the LS1 vs LS3? Which are you considering?